Kelly Osbourne, The New Face of Material Girl by Lourdes/Madonna 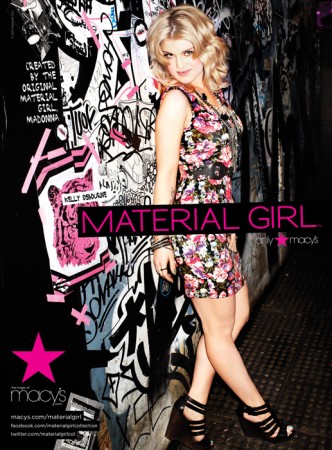 Call the Fashion Police, Kelly Osbourne has stolen the face of “Material Girl” from Taylor Momsen.  The Macy’s fashion line founded by Madonna and her daughter Lordes, has ditched the Gossip Girl traginista (Taylor Momsen) in favor Kelly 2.0 Styleite.com.  The cleaned-up version of the Kelly Osbourne we all got to know and be annoyed by on the Reality Show, The Osbournes.

Recently she has sat next 2 Joan Rivers on E’s Fashion Police.  She tries to hold her own – but in my opinion – she is such a watered-down version of her former sassy-self, she comes off vapid and clone-like.  She tries way to hard to be diplomatic and has lost all her edge.  Anyway, I guess there is a mutual love-fest between Lordes and the 2 British wannabe’s – Kelly & Madonna (haha), so I’m guessing it might be a better fit than the heroine-chic one – Momsen.

But on their next layout they might want to take it easy with Photoshop – Yikes!?!