“The Season of the Witch” by Inez & Vinoodh for W Magazine, September 2016

Jamie Bochert, Odette Pavlova, Isabella Emmack & Lexi Boling honor the heritage of our history in “The Season of the Witch” by Inez & Vinoodh for W Magazine, 09/16. With a sign in their hands and strong spirits in their hearts, Lexi and Jamie take off toward their chosen route of Salem. “It’s been over 300 years since the Salem witch trials, but echoes of the hearings still haunt the Massachusetts town.” Jamie, Odette, Isabella & Lexi travel back in time to a place of haunting mystery. Stepping out on the solemn grounds this story celebrates the spirit of the she. The only way to pay tribute to today’s brave women, is to open our eyes to this hard history. Past providence stands as a symbol of strength, a historic measure, that if unaltered can provide a light to help us to move forward. It’s in the honest bearings of the facts that we are able to find a step to stand upon. Edward Enninful unleashes fashion magic by bringing pieces to a place of historic power. Couture crafted both harkens to the past while paying tribute to the future. A silken sheath drapes over the body as gauze creates a see-thru cape. Mystical elements of editorial excess are seen in this hauntingly, beautiful artistic feat. Authentic garb grabs our attention, with pieces that remind us of Renaissance attire. Using the allure of alchemy to set the stage, styles speak to another time.

Pavlova projects in profile against the baroness of an old barn. Covered in a full-length Dsquared2 jacket and skirt, this stands as one of the most authentic images of the editorial. Sheathed to the ankle in a long, black Hermès coat, while from behind we see a sliver of skin, peeking out under the base of her hooded bonnet. Chanel’s day-dress pays tribute to the times, with white ruffles topped with a black tie falling to the ground. Louis Vuitton makes a strong statement as Isabella stands in a leather swing-coat and flaming red leggings. Bochert bursts through the scene wearing a colorful Blumarine, while she walks away in B/W, wearing a dramatic Giorgio Armani cape and an authentic Horisaki Design & Handel Hat (Gigi Burris Millinery). Completely covered, Jamie drips in the darkness of a Viktor & Rolf, while she lifts up her love in an all white Azzedine Alaïa. Modernity makes its way by Chloé, Chrome Hearts, Isabel Marant, Tripp NYC, Alberta Ferretti, Alexander Wang & Versace while vintage has it’s day with Alexander McQueen, Vetements, Comme des Garçons & Prada. The chaos of the times are captured in the colors of the story. In on of the most profound pictures we see Odette walking through a fenced in area with fog setting in the distance.

Bewitching beauty takes hold as Dick Page brings us a powerful piece of makeup magic. Naked faces are unleashed with soft shades that symbolize strength, while Lexi delivers a dark tale of torment that starts on her skin. Opposites attract… Brutal liner attacks the eyes with a hard look enhanced by a matching black headband. While light shadow steals the show proving her deep emerald eyes require no cosmetic enhancement. Flushed cheeks mark the vintage faces with a blast of pink blush, casting a youthful glow. Images ache with duality undefined, from romantic and airy, features are enhanced with subtle colors that shine. Bold lips beguile with a dark, blackberry tone, while stay-fresh mouths exude a just-kissed hue. A myriad of cosmetic techniques inspire us to see, proving these differences are only skin deep. Malcolm Edwards masters the art of hair with coiffure made for magic. Jamie and Lexi go long/straight with strands that call on the spirits of the wild, while Isabelle lets her dark dew spike out with a sassy style that moves beyond sexuality. Odettes’ fair hair is a symbol of the times with braided locks that represent the era, while history stands as a measure of truth, not to be altered. Dancing in front of a fire we can almost feel these fearsome females lifting us up through the embers of love. 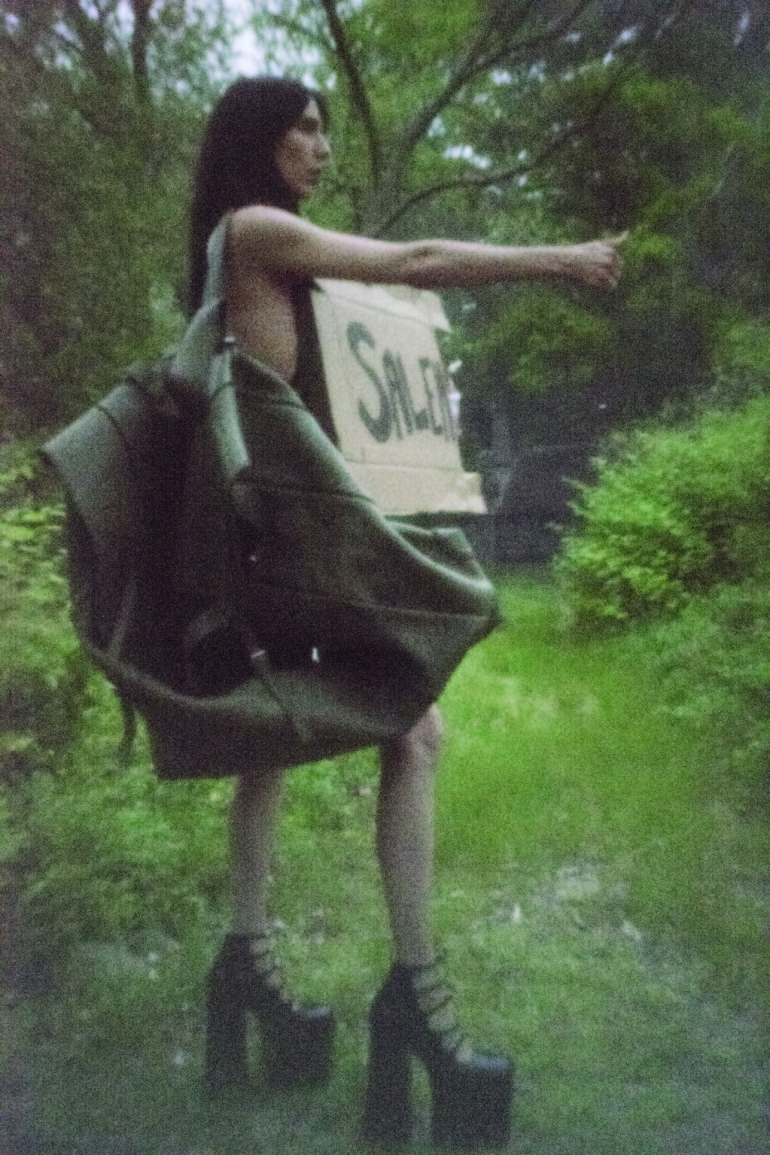 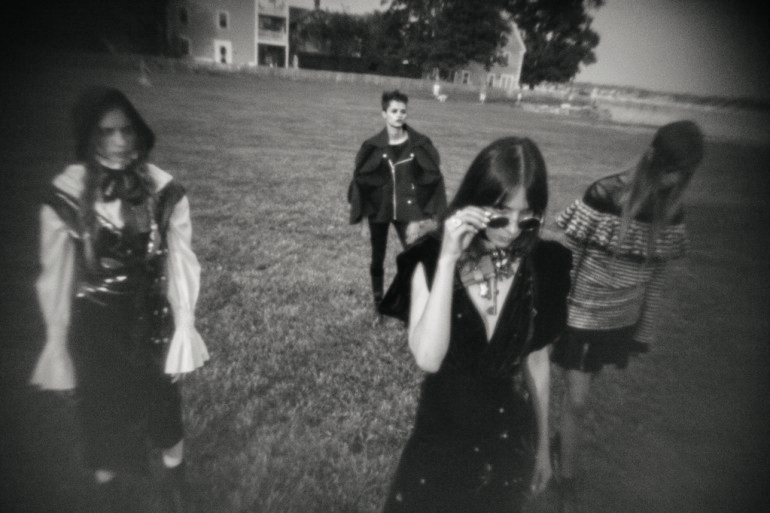 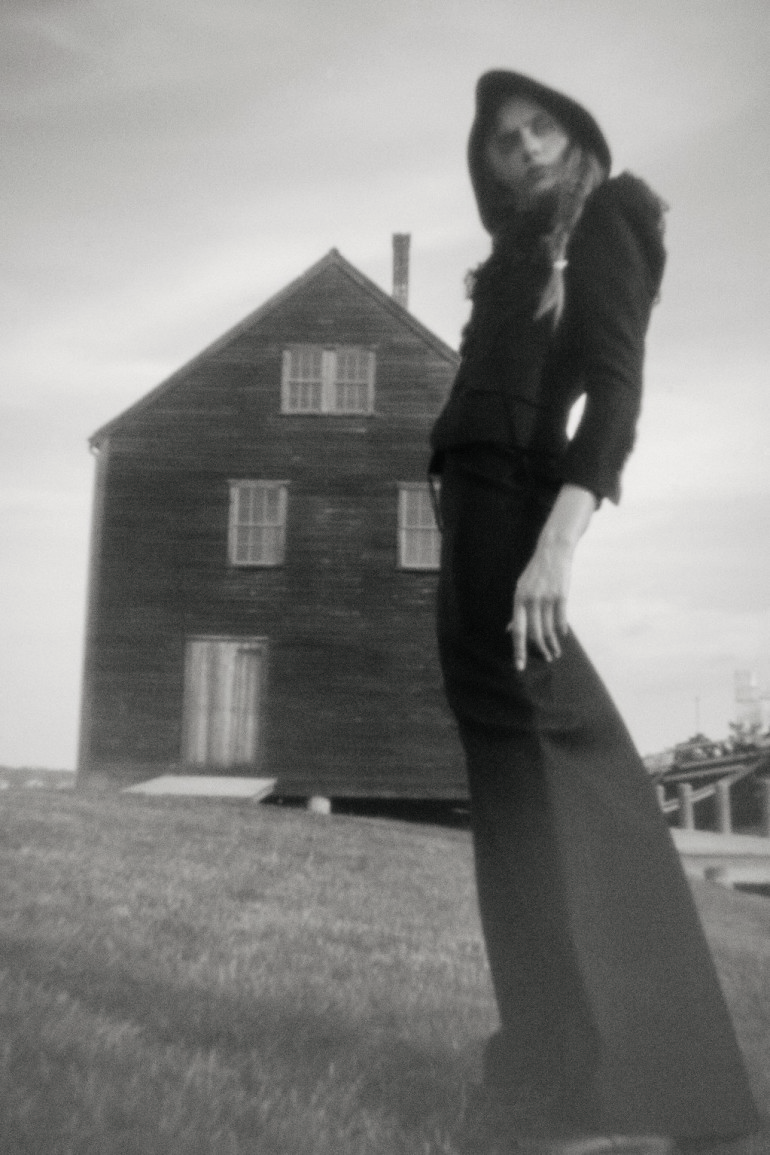 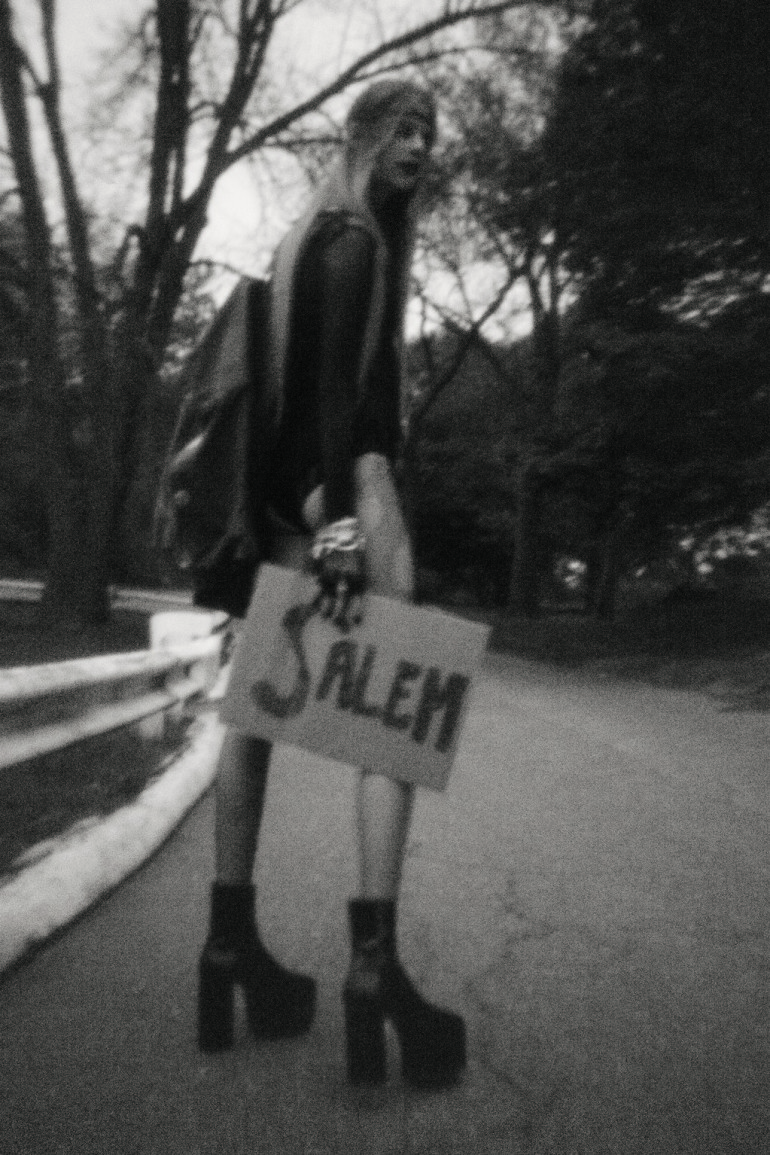 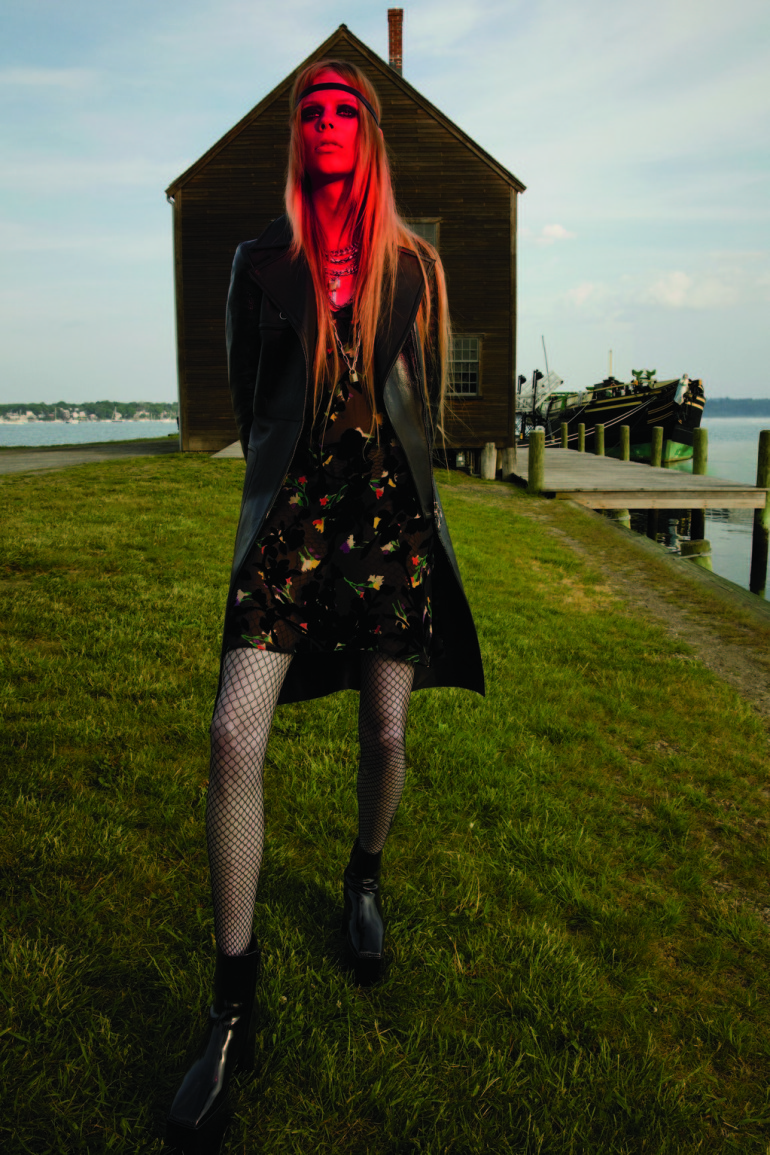 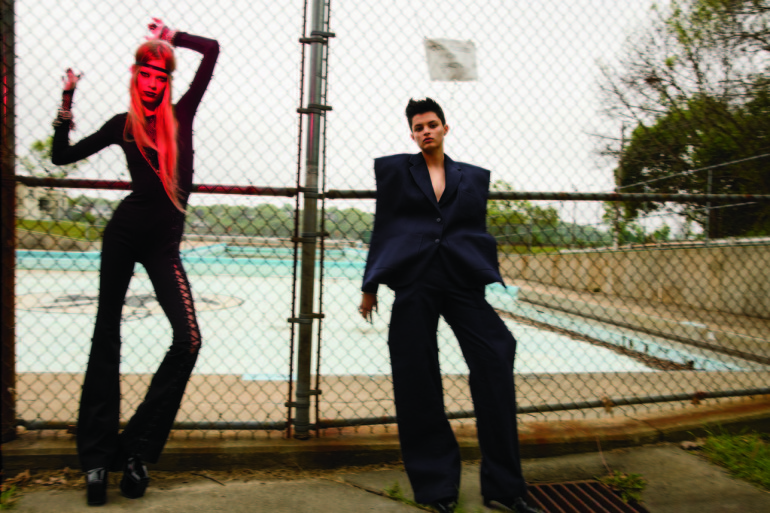 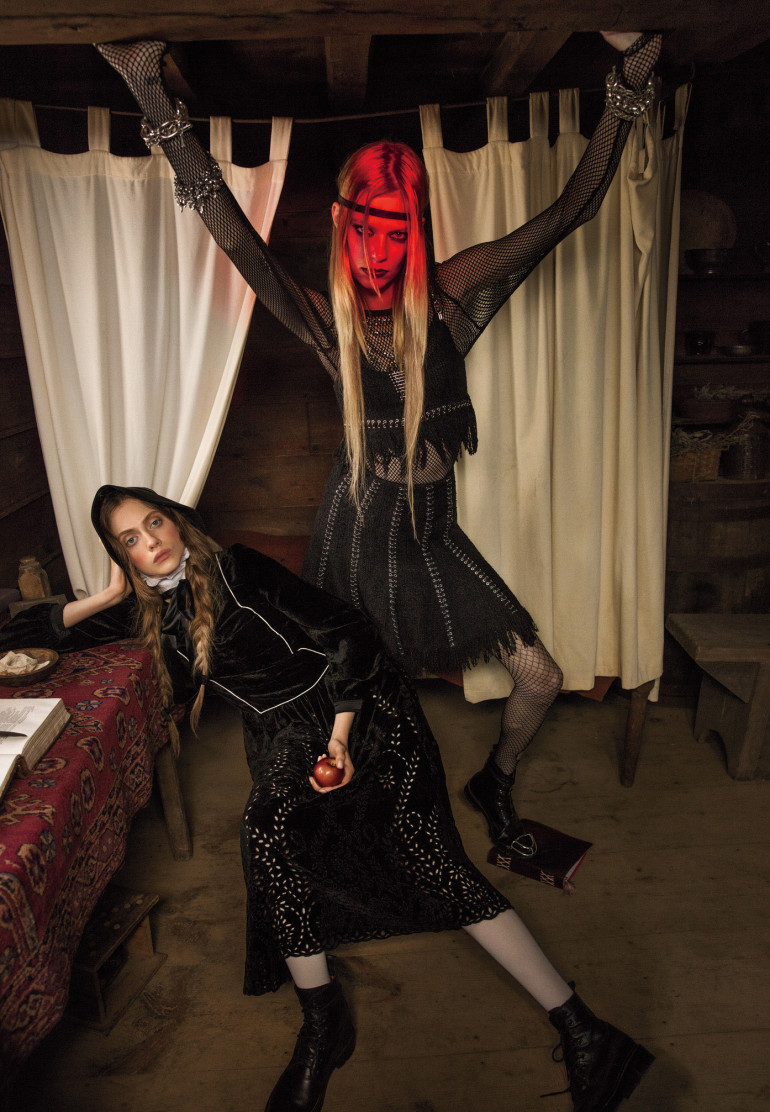 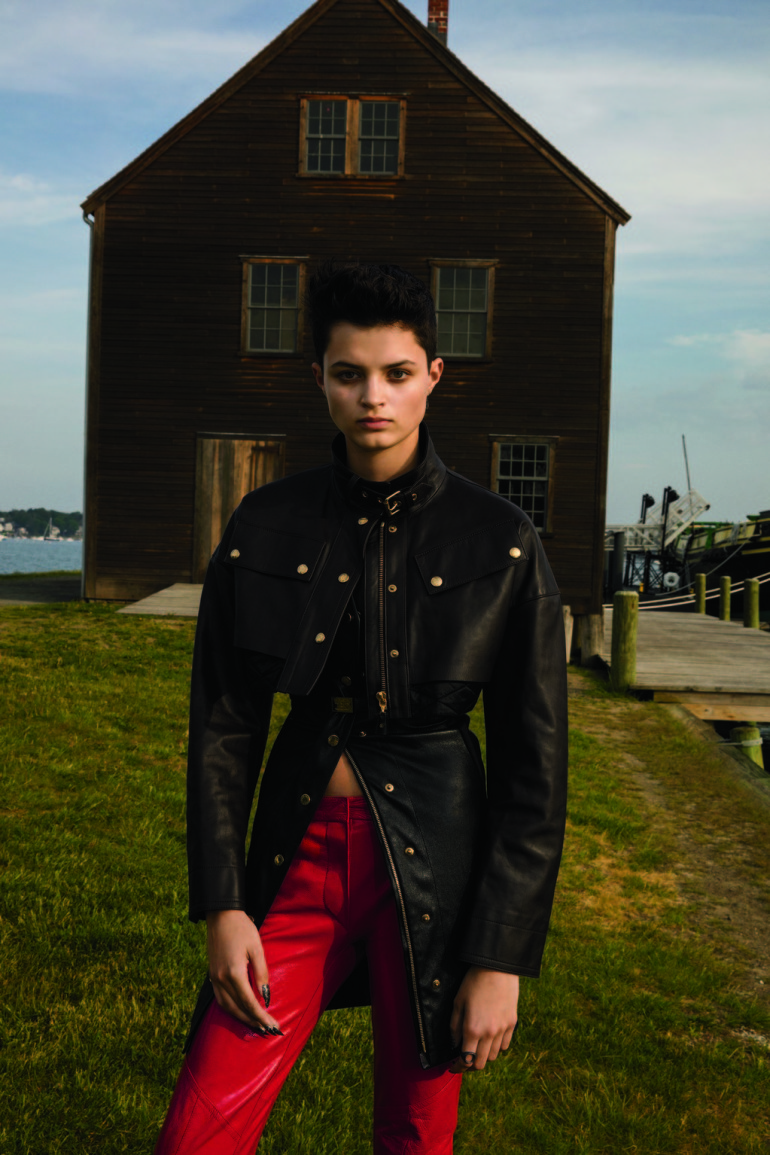 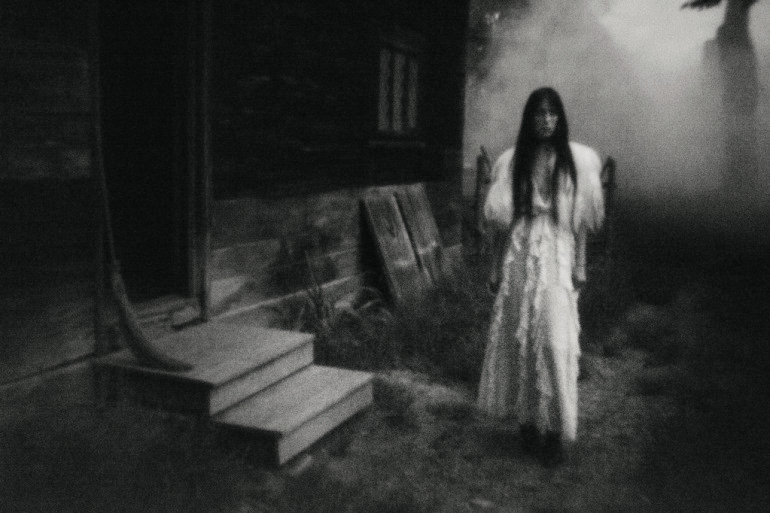 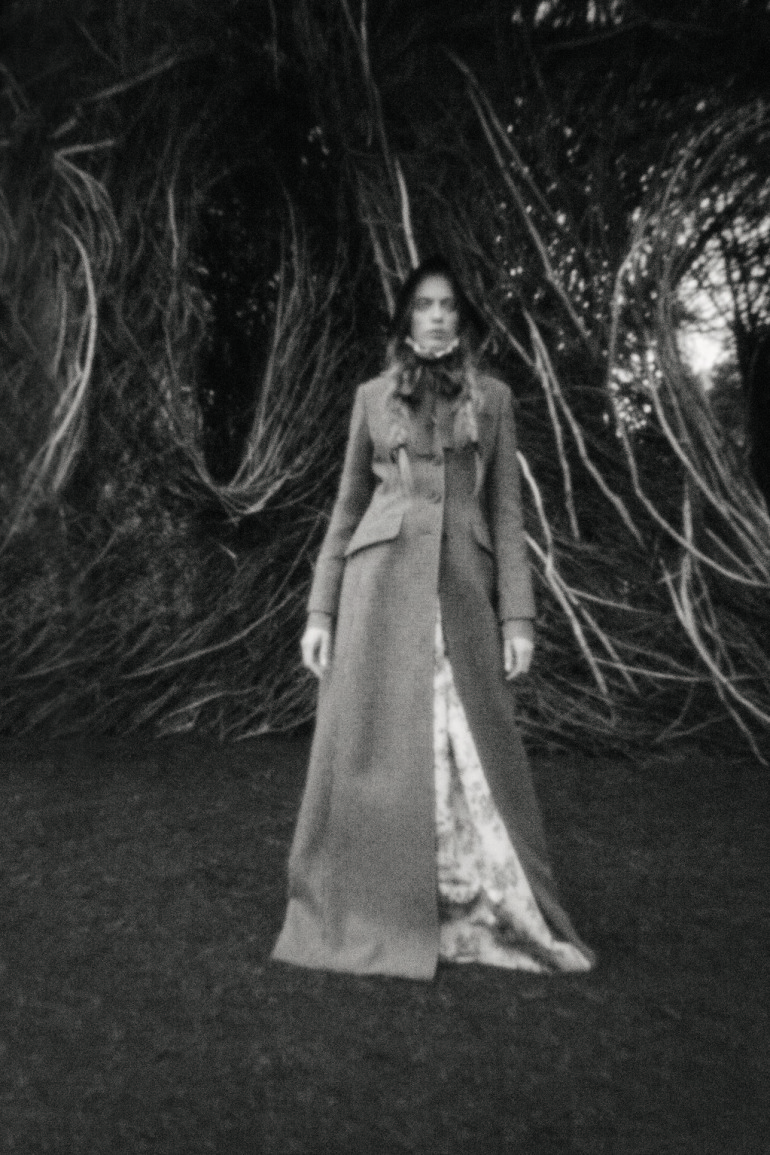 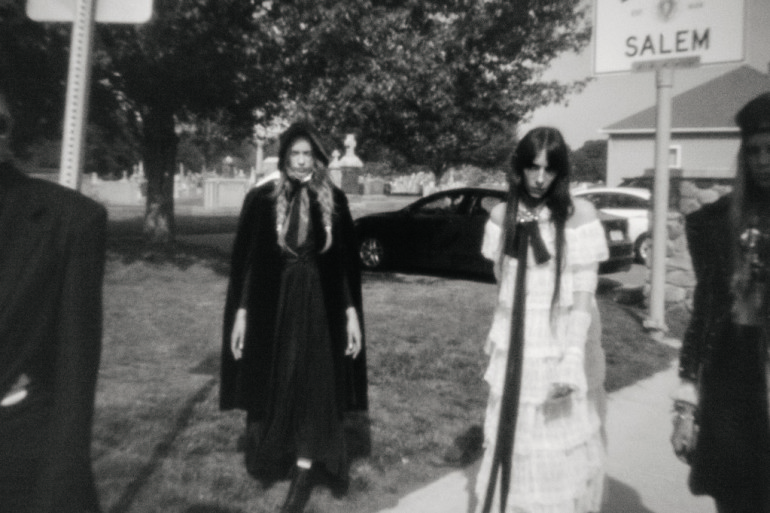 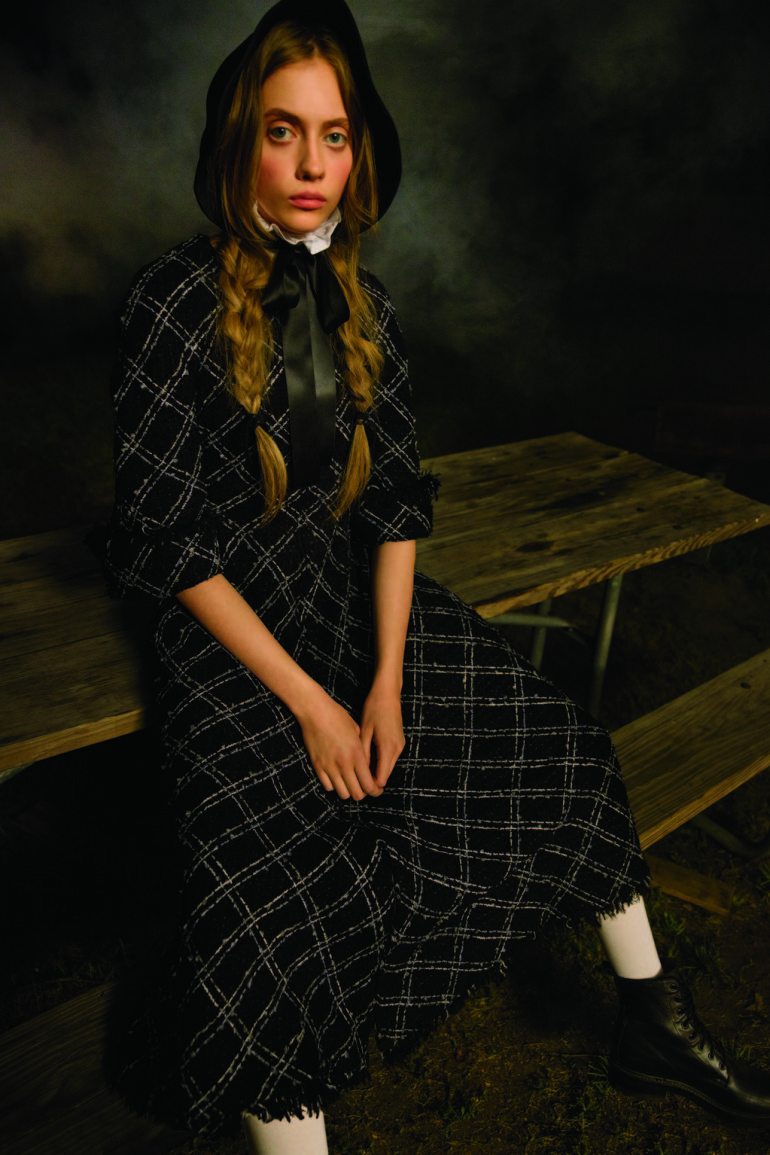 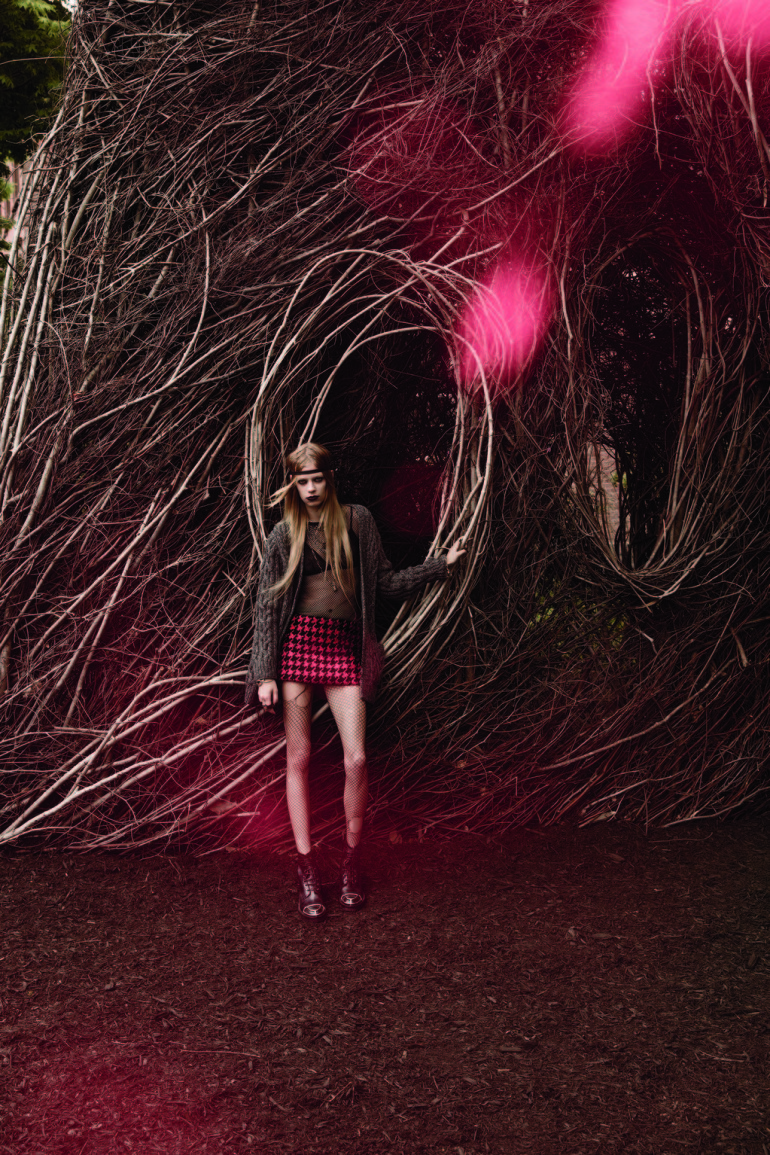 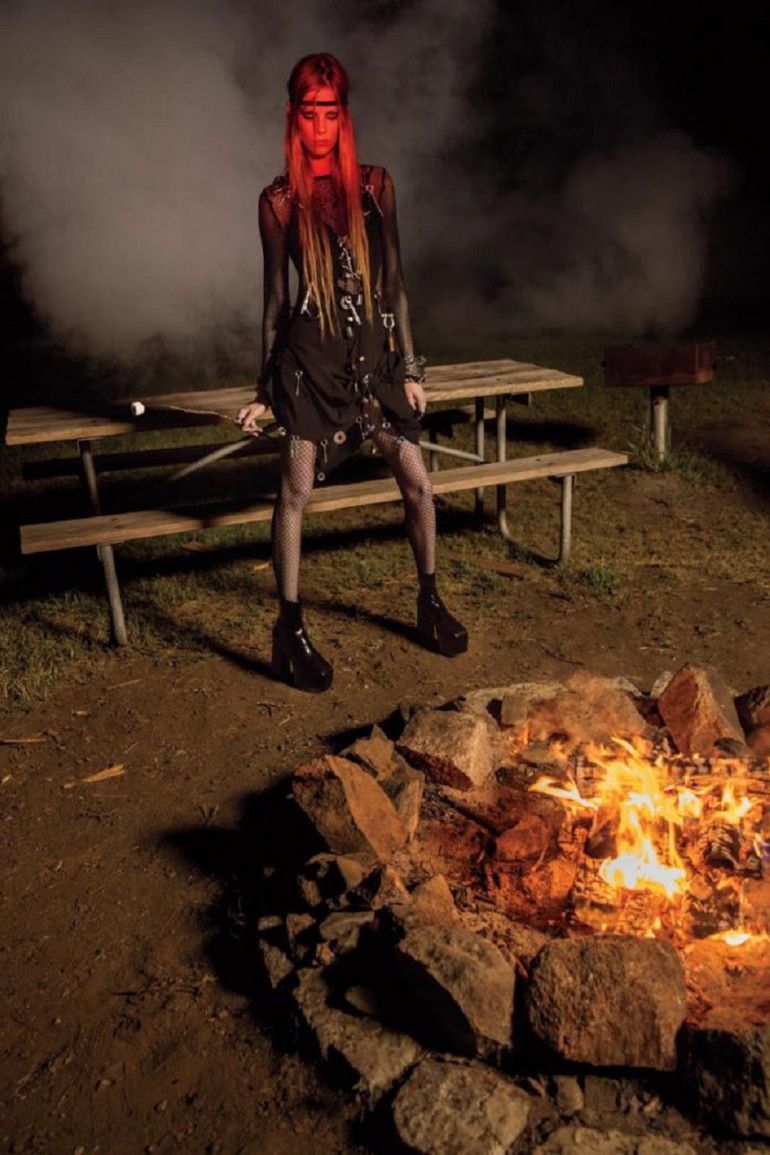 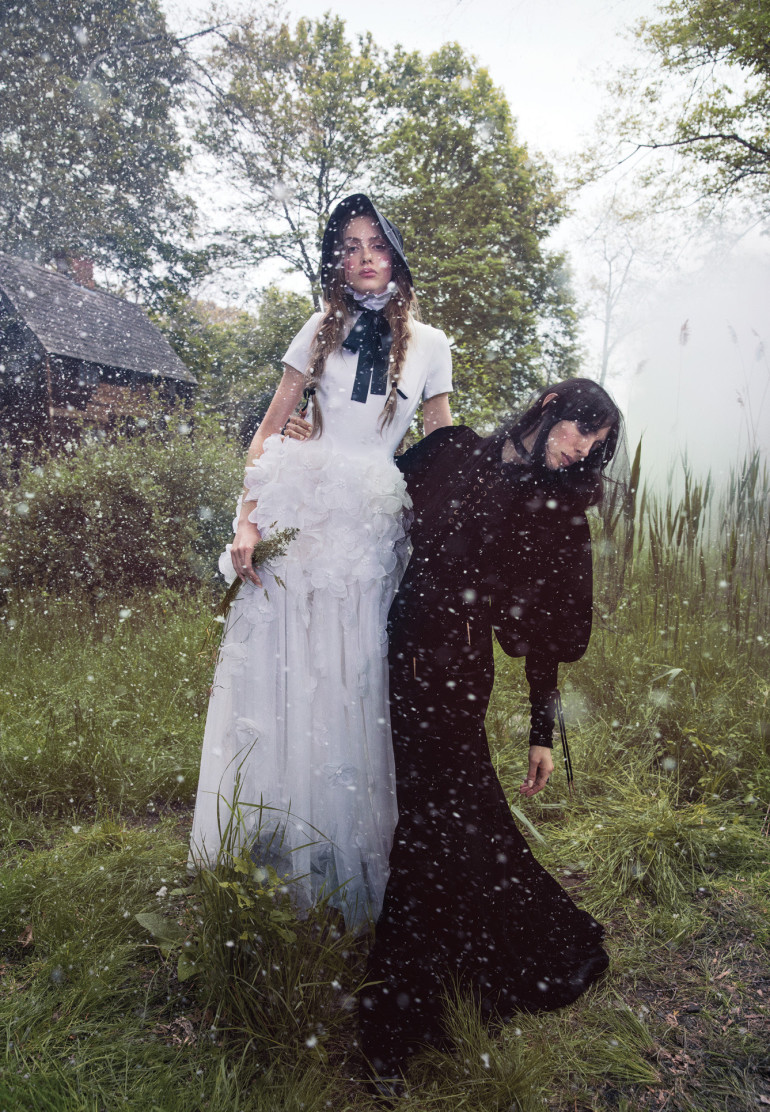 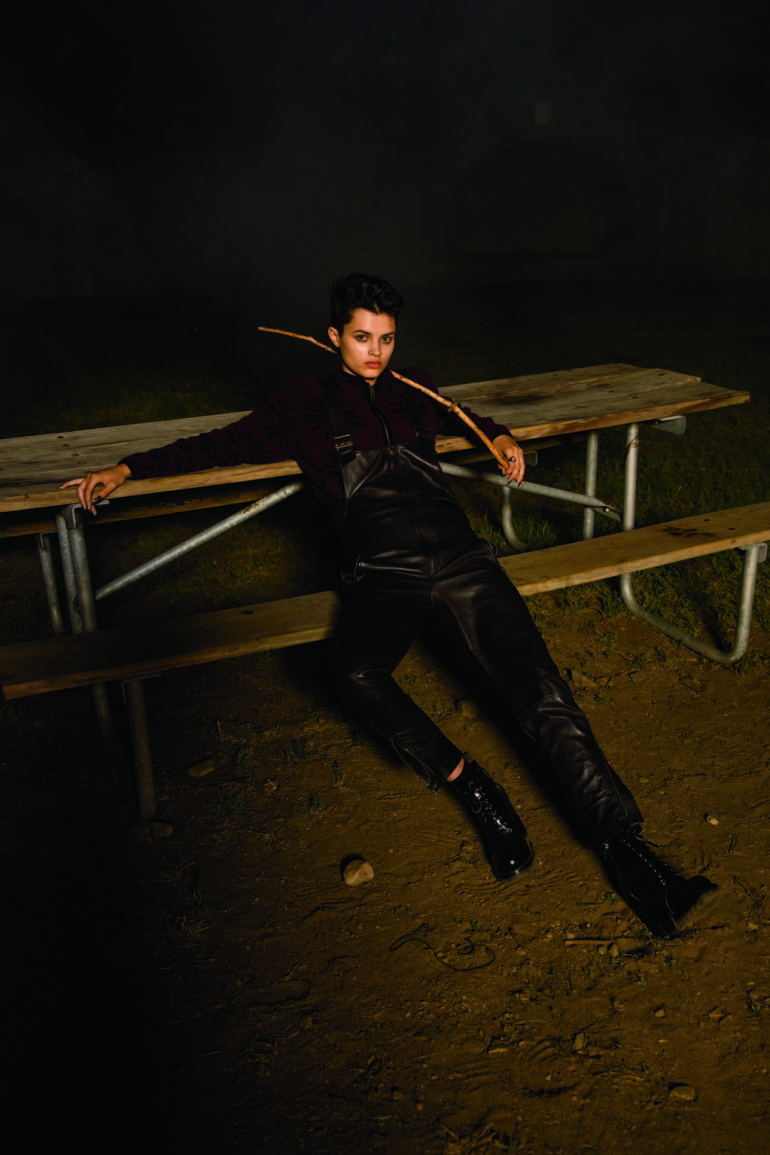 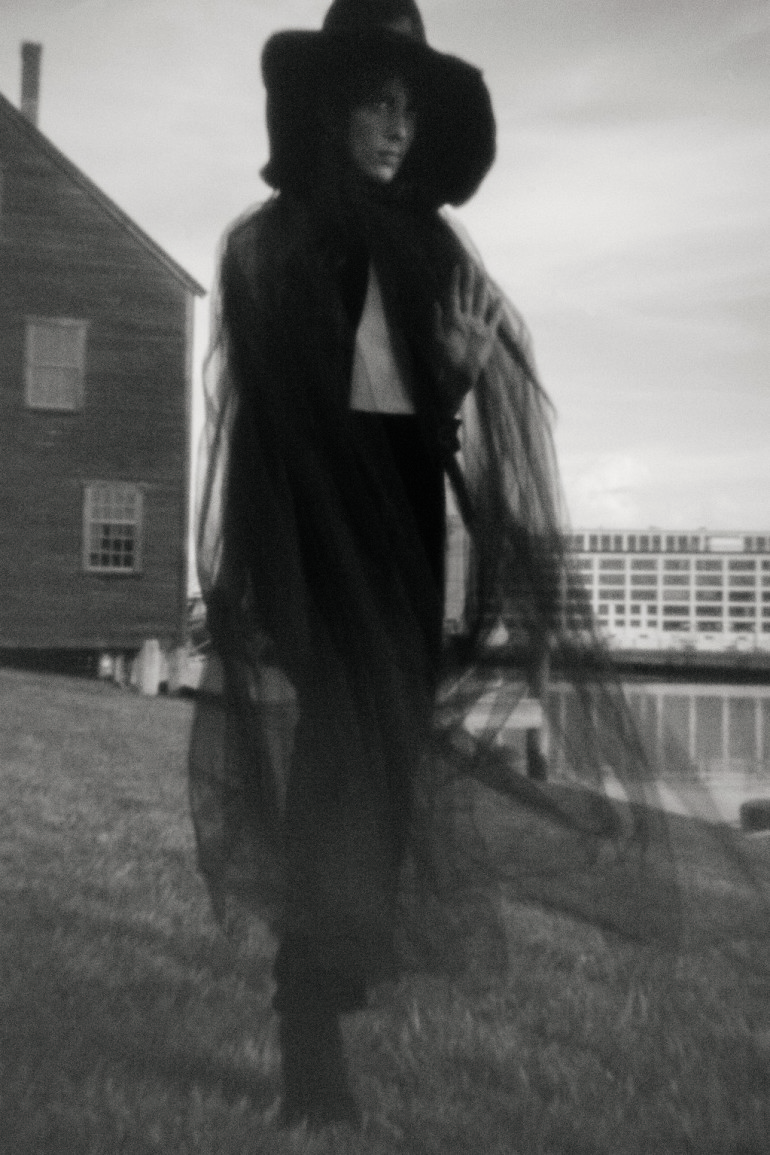 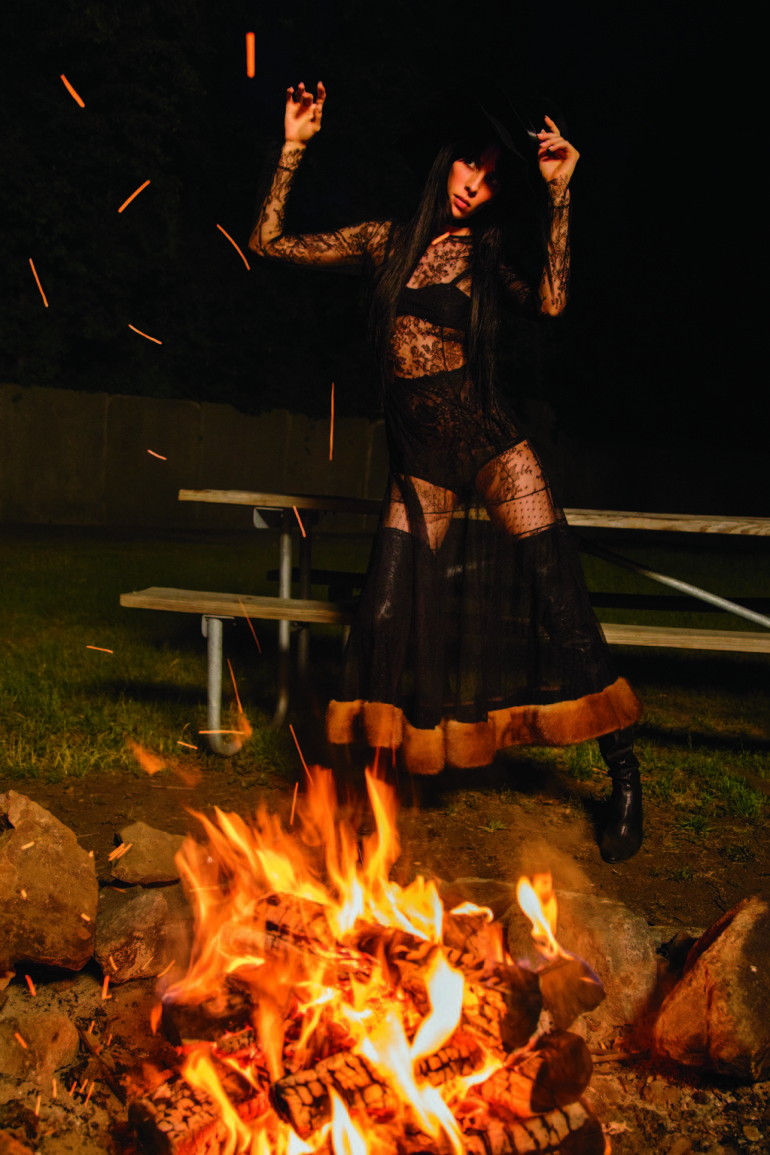 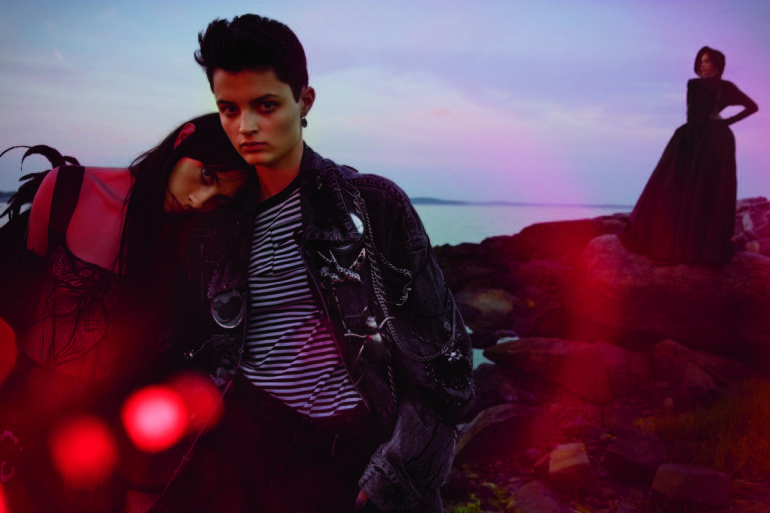 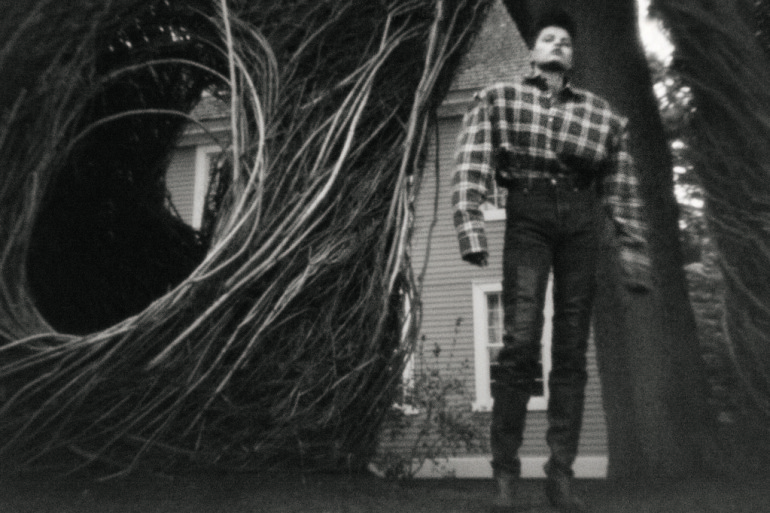 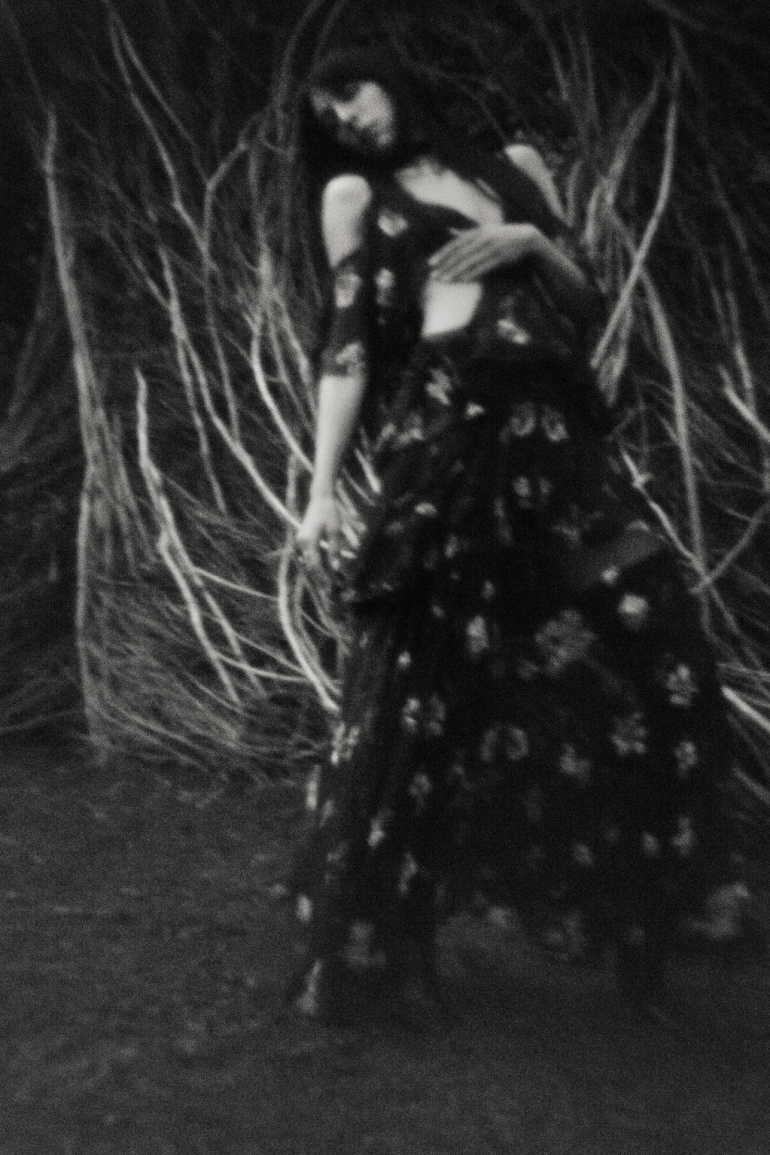 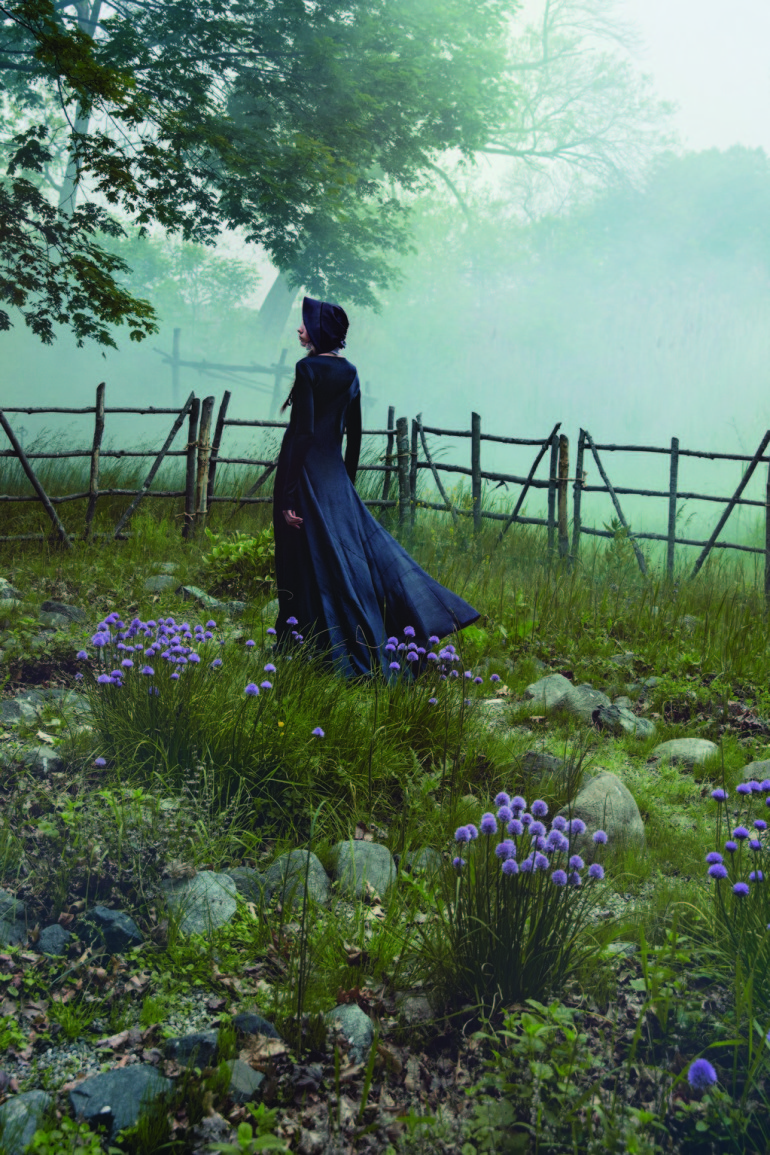