Ali Michael invites us to join in the “Jungle Beat” by Mario Sorrenti for V Magazine, September 2016. Tribal goes tectonic in tapestry of tactile. Join the jungle beat as confetti drops across the page in this collision course of creativity. Authentically inspired imagery forms an artful revelation, as Michael finds herself caught in a conceptual explosion. A plethora of pageantry plays itself out with rich dimensions canvassed by succulent colors. Costumed apparel captures our imagination with garments that are garbed with edible accessories. Mel Ottenburg weaves a flora of today’s fashions with a wonder of fine fabrics. A wealth of rich pieces brand her body from an appliquéd dress with high boots by Balenciaga, a sweater by Versace, skirt by Nicolas Andreas, dress by Dior, fringed mini by Adam Selman, pants by Discount Universe, a jacket by Prada and tall boots by A.F. Vandevorst. Vintage pieces sets the stage from a necklace by Leekan Designs, a choker by Ashish, and divine designs by Richard Quinn and Gaspar Gloves. Playfully progressive yet aggressively avant-garde, couture captures the Jungle Beat.

Embracing the culture of tribal face paint, Kanako Takase uses the skin palette as an expression of progression. Body art takes center stage, transforming each picture into a masterpiece of creative makeup. Masks are drawn on paying tribute to the many indigenous tribes. A dizzying mix of artistry and excess, through the use of tones, texture and space we see each character come to life. “Designs are inspired from nature, as rich combinations attempt to convey spoken and unspoken expressions with the stroke of a brush,” Dramatic colors project a theatrical theme with dynamic concepts divined to be seen. “Makeup is made in such a way as to indicate the intrinsic nature of each character.” Hats are the thing… headgear plays a part in this masterful mix of food and fashion. The notion of extremes is poetically portrayed, as Bob Recine explores the essence of haute headware. He starts the story with a custom head-piece that projects pictures of a black Bengal tiger on each leaf. While, a see-thru, plastic circle surrounds the face with a twig explosion happening behind. Bubbles, fruits and flowers make a statement, as a wicker crown with a leafy green headdress falls over her shoulders. Ali moves to live art territory, with grapes on her head & a flower in her mouth – she exposes the future of fusion. 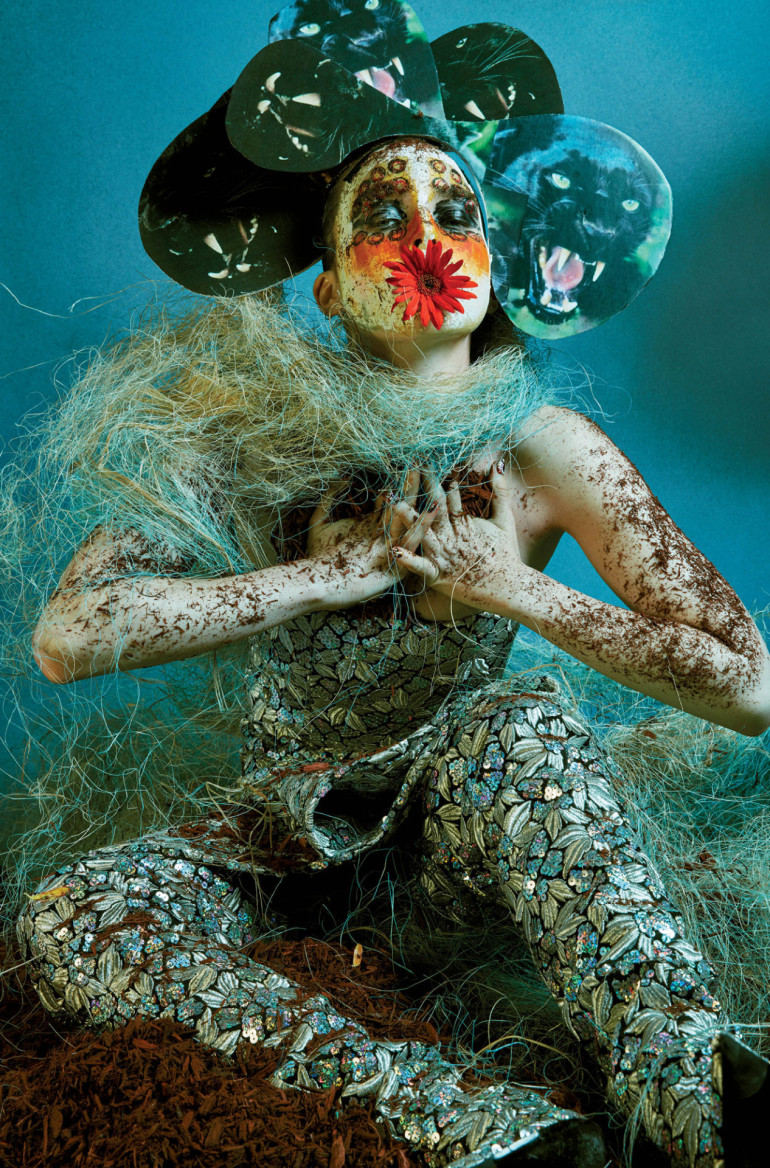 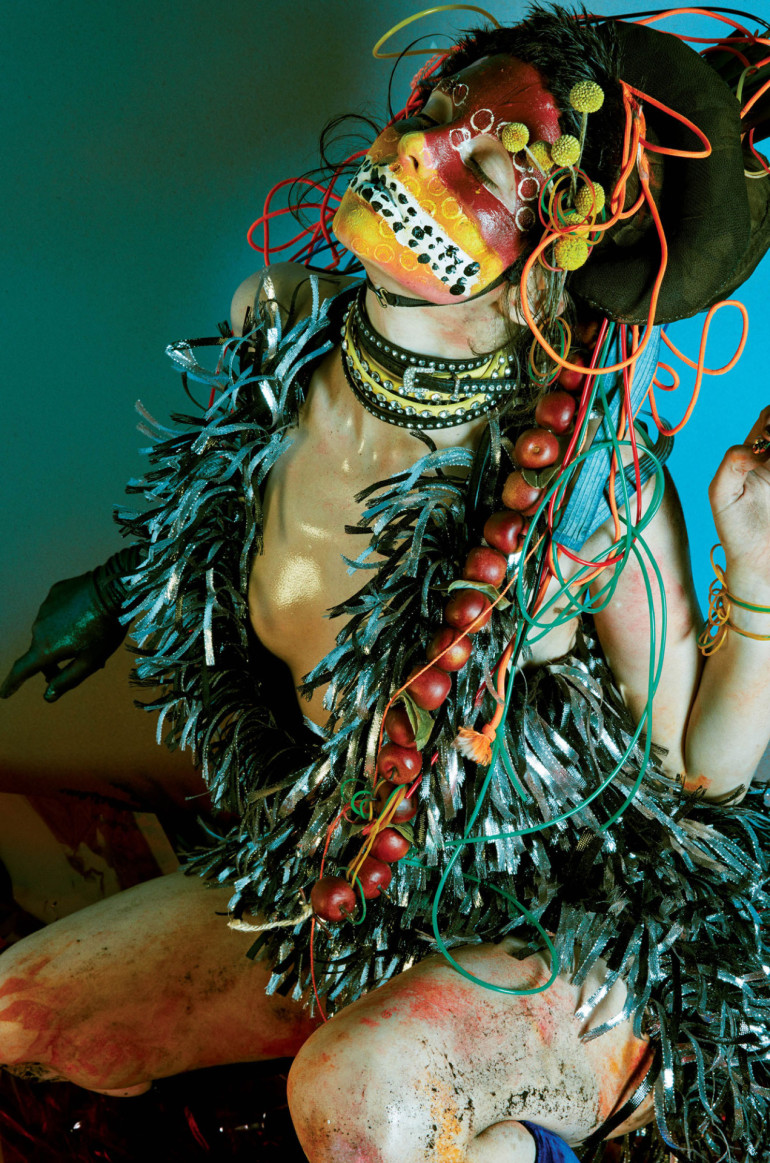 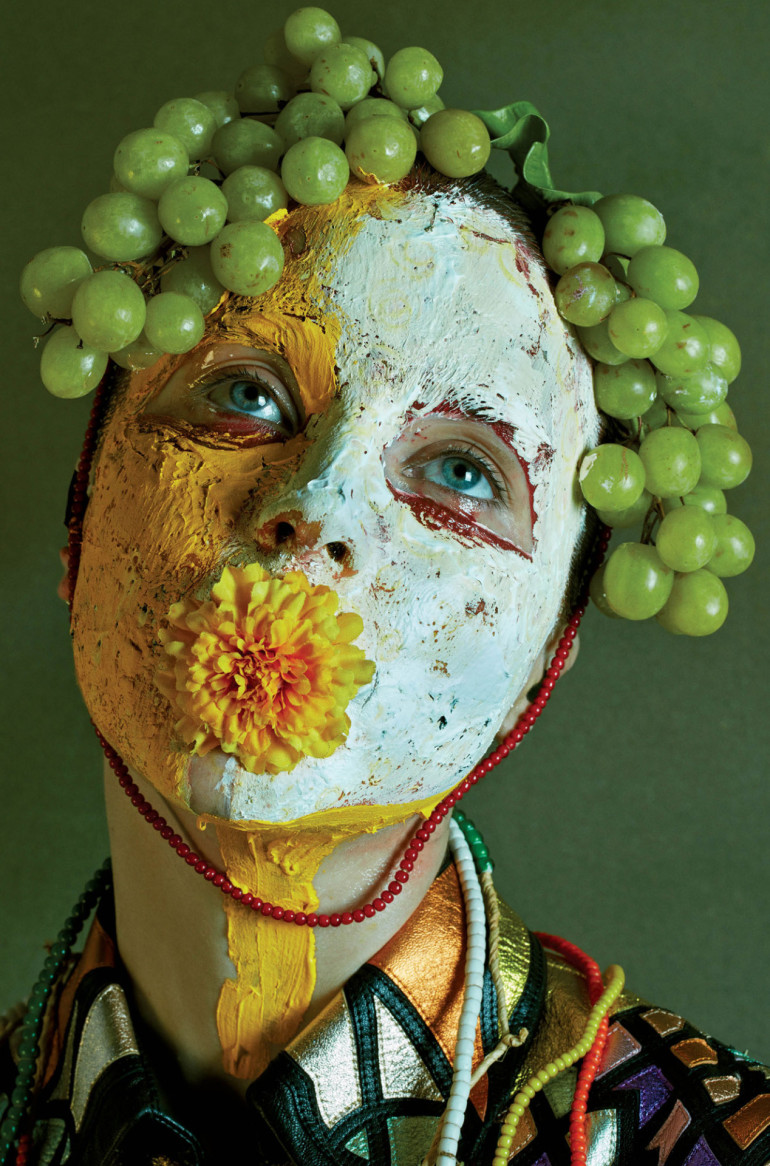 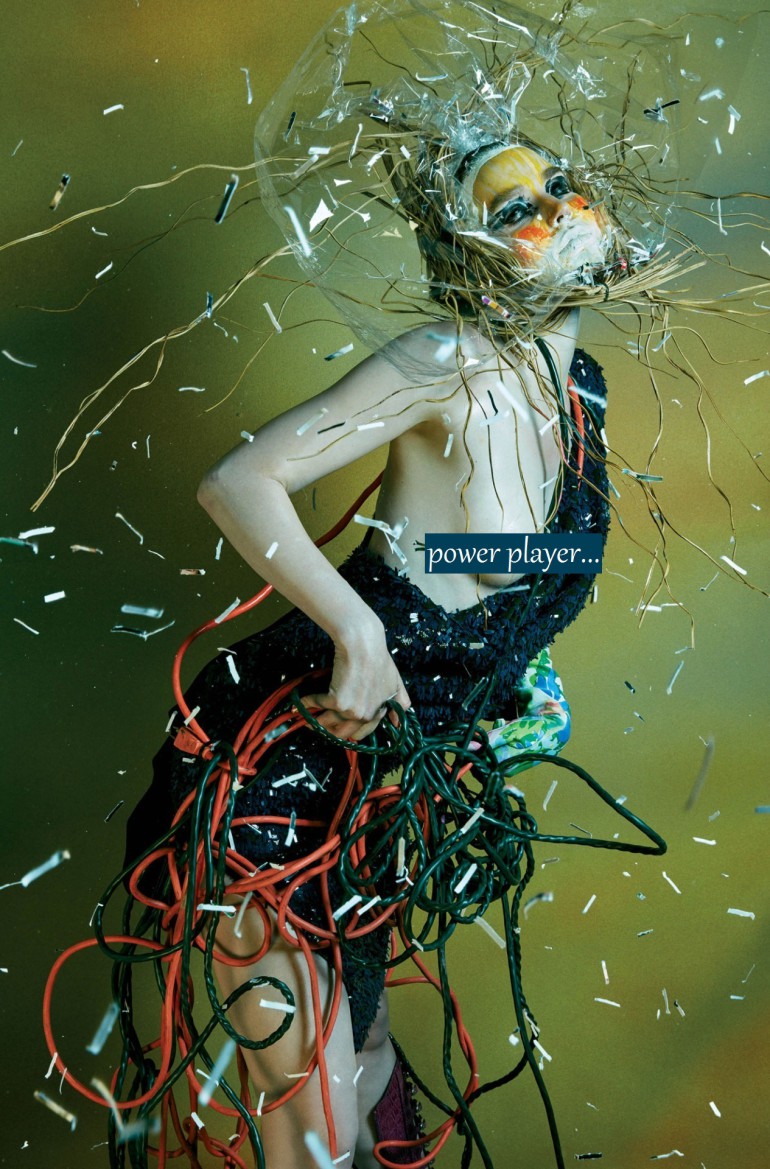 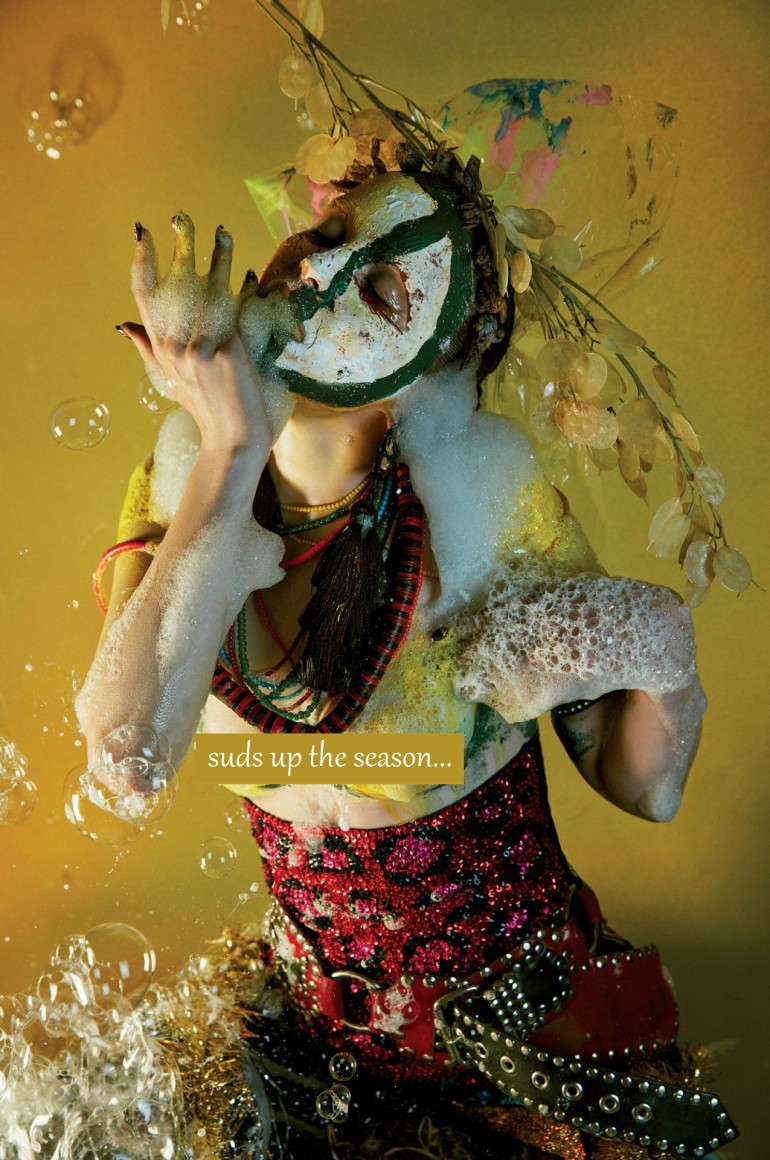 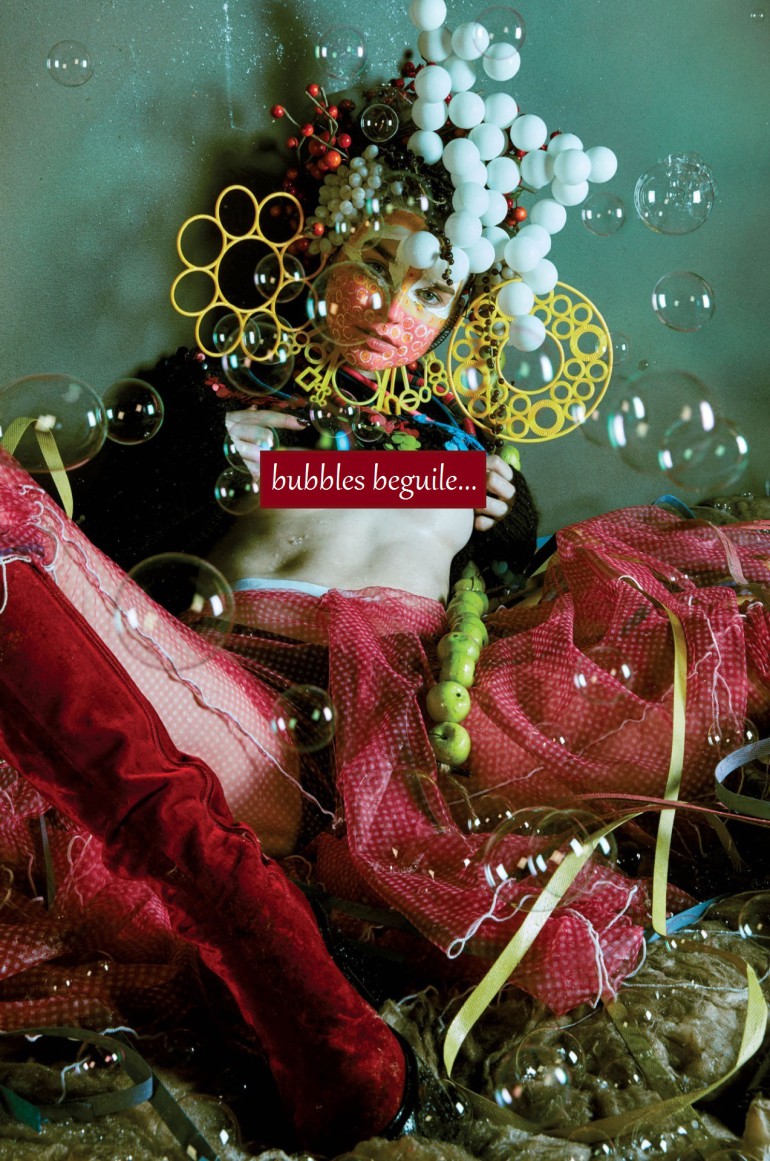 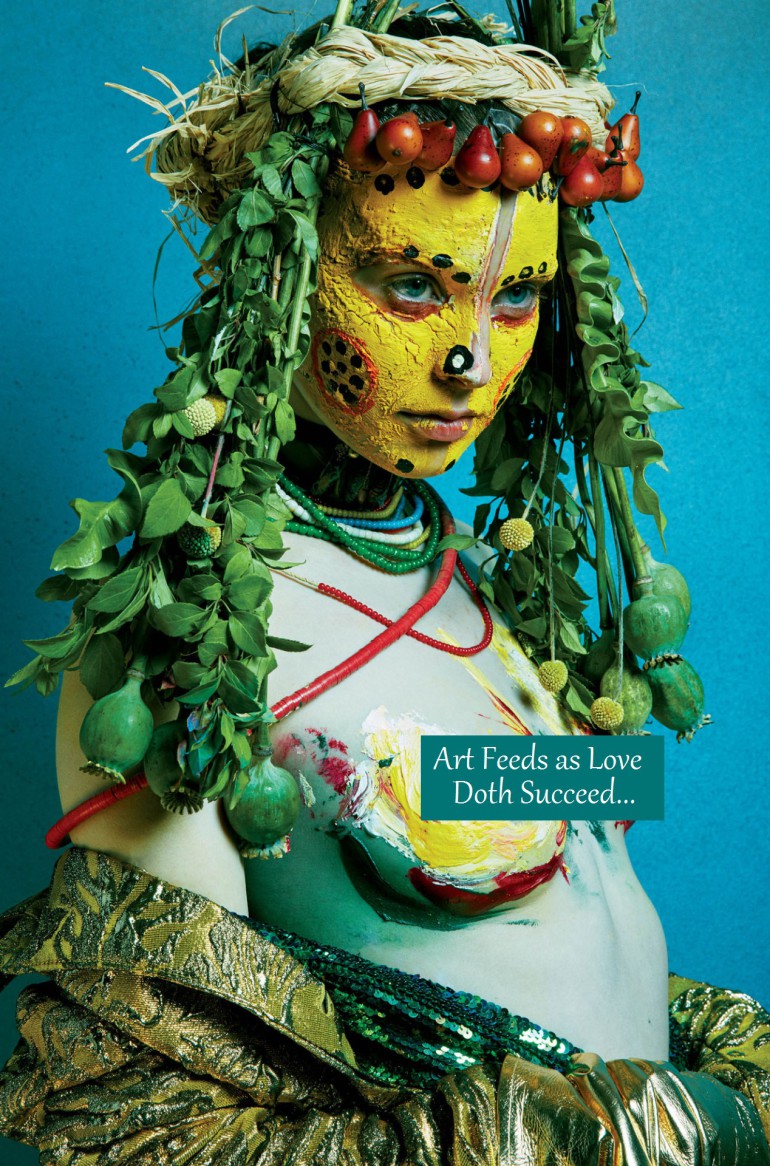 Sorrenti Captures the Art of the Family Tree ~ Cleveland Style

Ali Michael Shows Us She's the "Queen of the Internet"