Hannah Bennett faces her fears in “Phobophobia” by Dima Hohlov for King Kong Magazine, Issue #2, A/W 2016. A fusion of phobic fears and photographic fantasy, this story delves deep inside the human psyche. A compelling take on the art of the unknown. Dealing with everyday anxieties – in the form of phobias – can lead to a disorder. For many people the first step is denial. Suffering from such a reality, makes it’s natural that your body would respond to the concept of concealment. We aren’t speaking about the descent into deception, rather, the sink into shame. Kim Howells invites lightness by using fashion as a way to mentally fly. Couture combats the pain of phobic inclinations through avant-garde excess. Bennett is brilliant as she depicts the fear of heights with clear trepidation. Saran wrap has her stuck steps from the bottom with her feet dangling in mid-air. Standing helplessly at the top of a ladder, we watch as she begins to wobble. Is this true or is it fantasy? Those who suffer from such debilitating fears know that, it matters not what the facts are, but what our body reacts to.  We must understand, this isn’t about convincing someone they’re wrong, it’s about healing the minds of many.

Makeup shifts as Ariel Yeh adapts to this ever-changing picture. The face starts simple with a touch of white lining the upper eyes, as intensity builds beauty acts in kind. Under a sheet of plastic, innocence starts to crumble. We witness her pain emanate out, in an act of masterful artistry, with no mascara and just a hint of brown shadow. Yeh uses subtle sparkles under her eyes, as if she were crying a dusting of white diamonds. Thick brows are brushed up to push a panicked like affect, as melting color creates a look of confusion. Red radiates as this oral fixation leads to an artful revelation. Crimson gloss oozes over the mouth making it look like the lips are bleeding out. I hesitate to say what I’m thinking, but this hair emulates the saying, “Business in the Front Party in the Back.” Nao Kawakami captures this killer new dew by making the Mullet the coolest thing around. Watching with empathy, we see her scrub her legs so hard we can almost feel the skin being ripped away. This is what it would be like to fear something we take for granted… like being under a blue plastic sack and not being able to breathe. 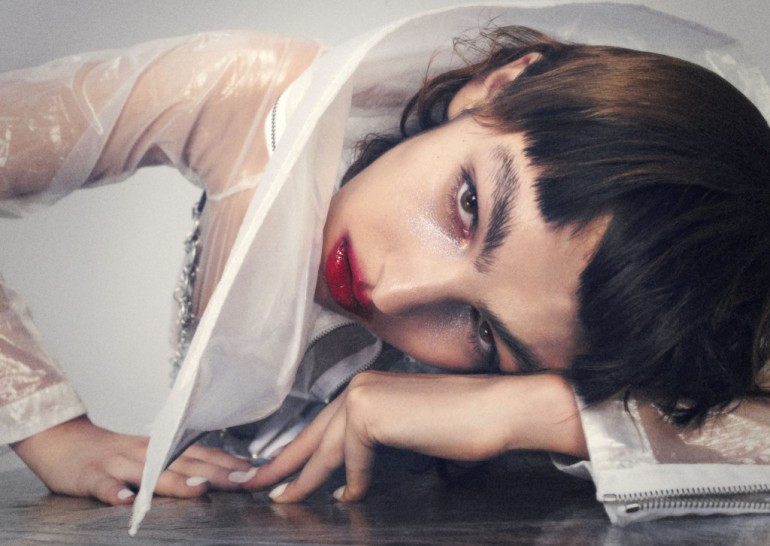 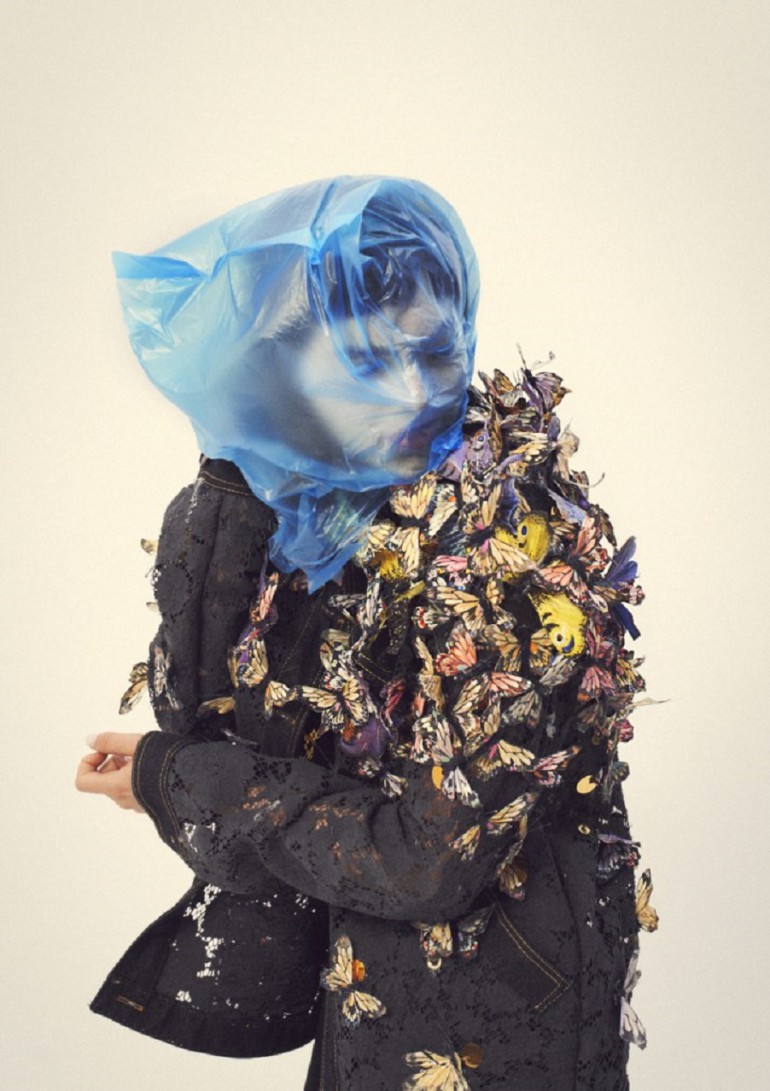 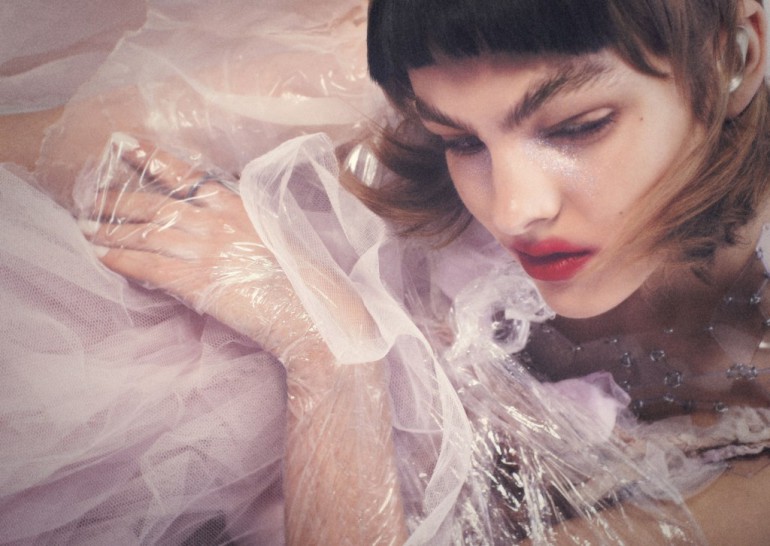 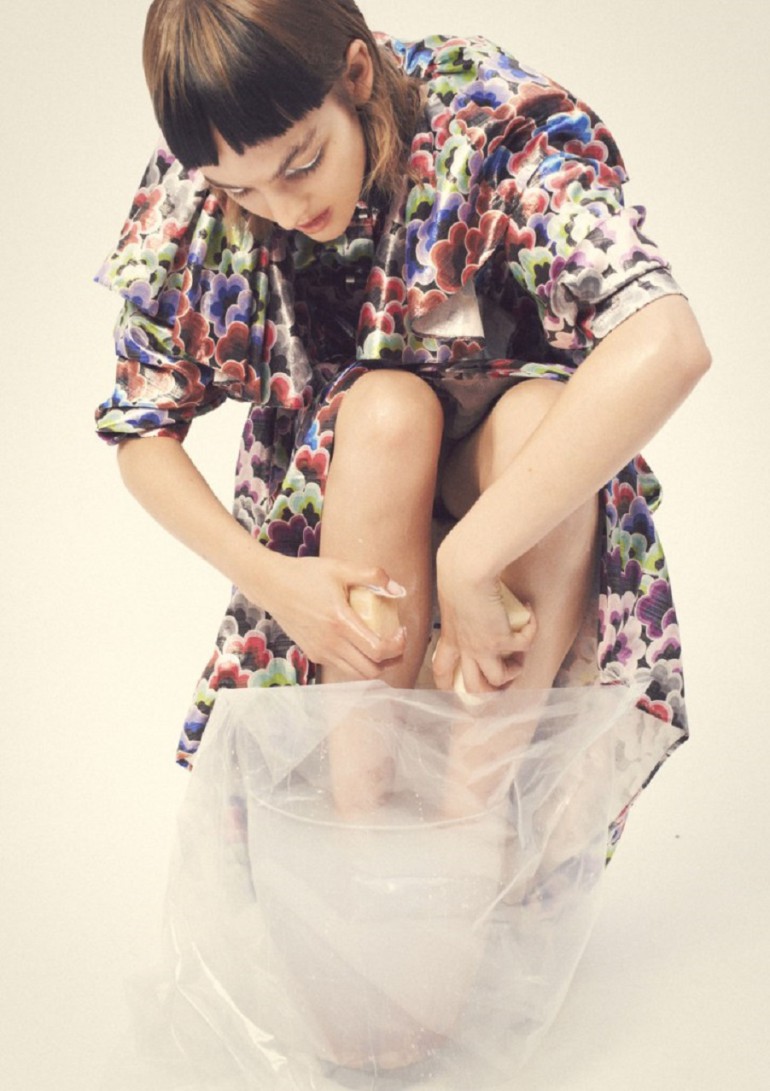 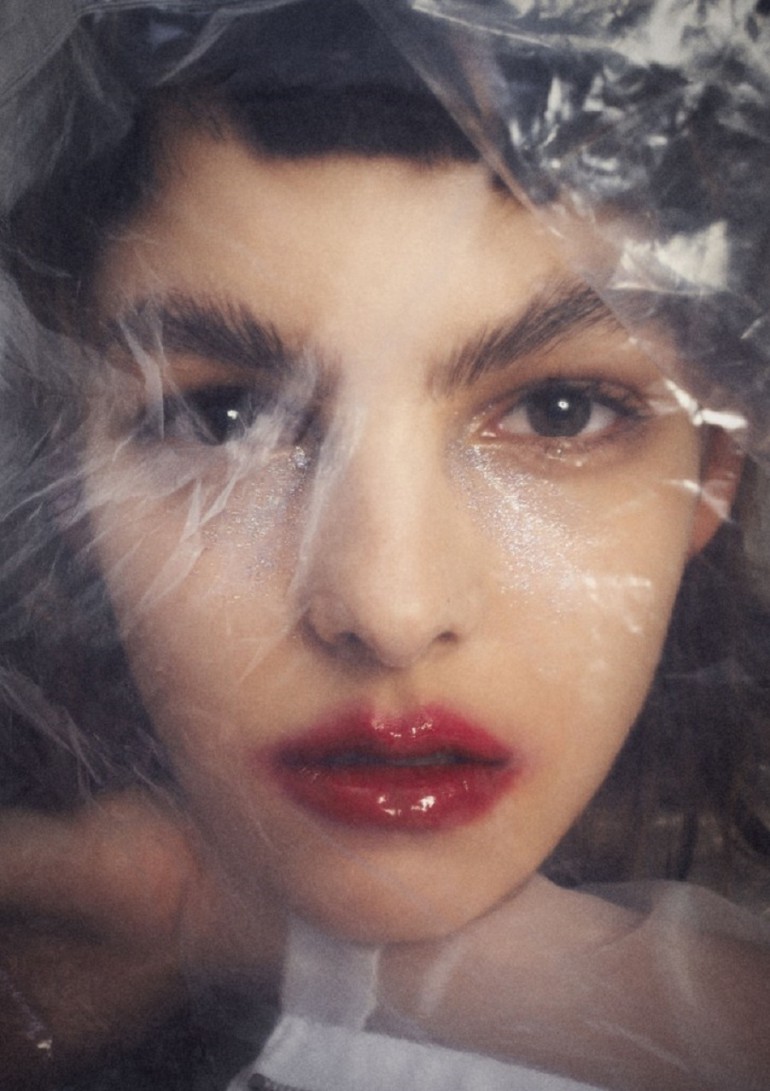 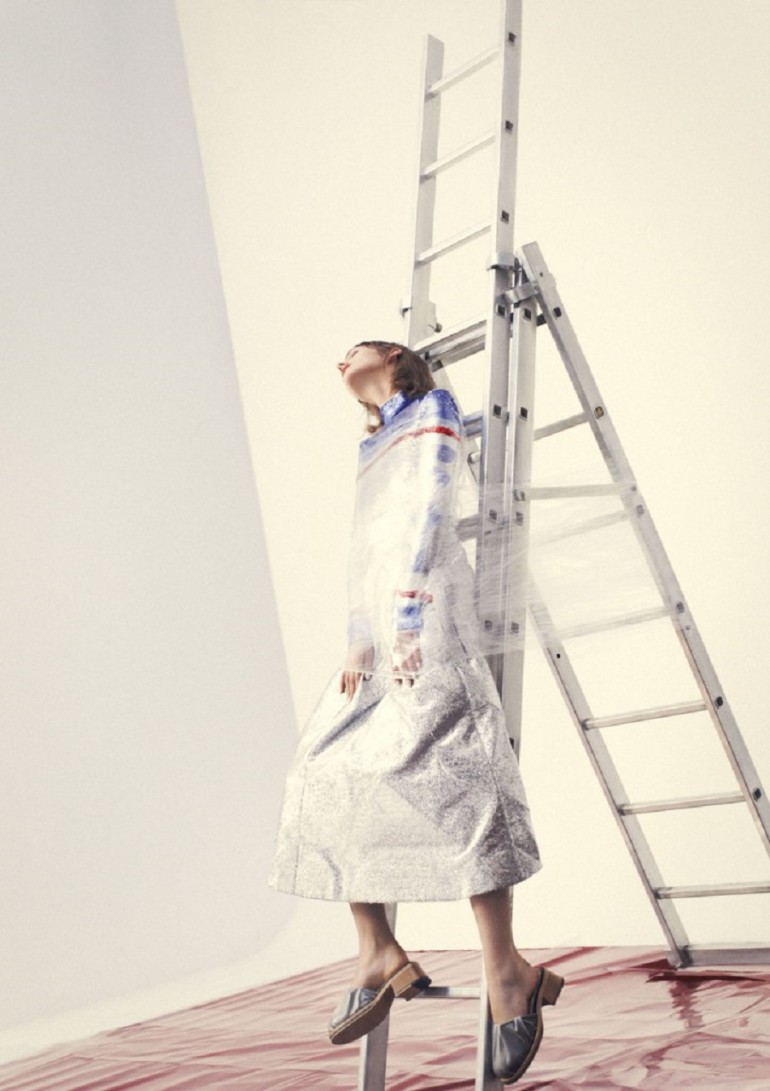 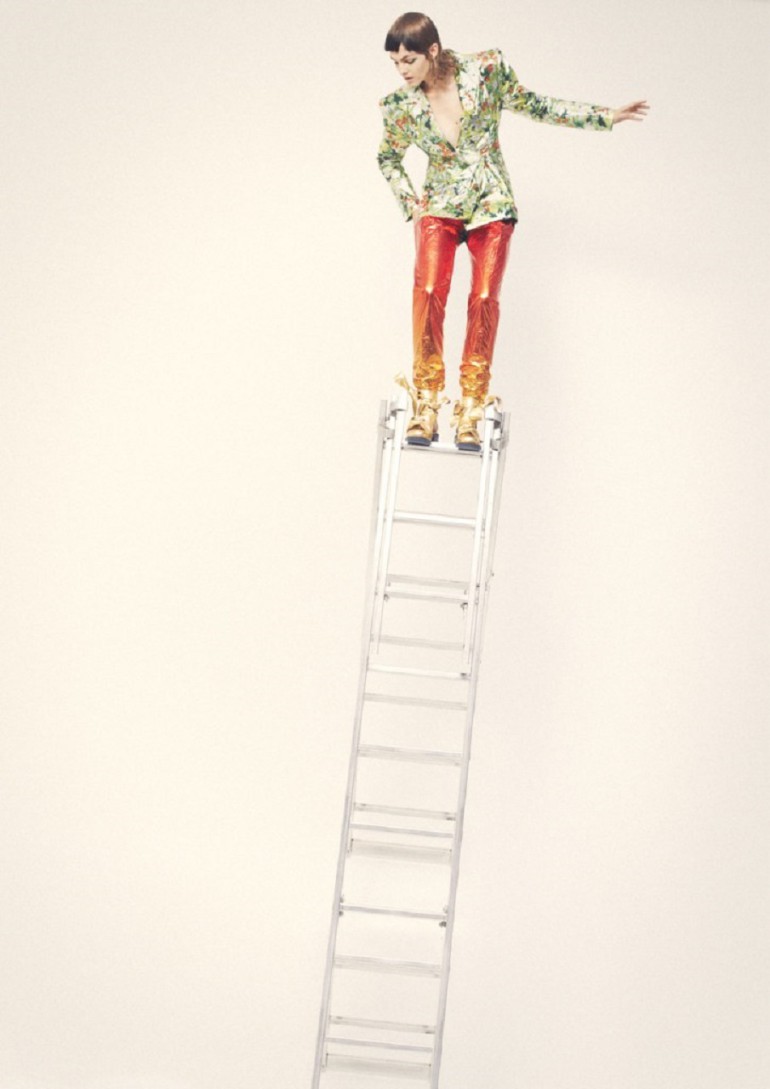 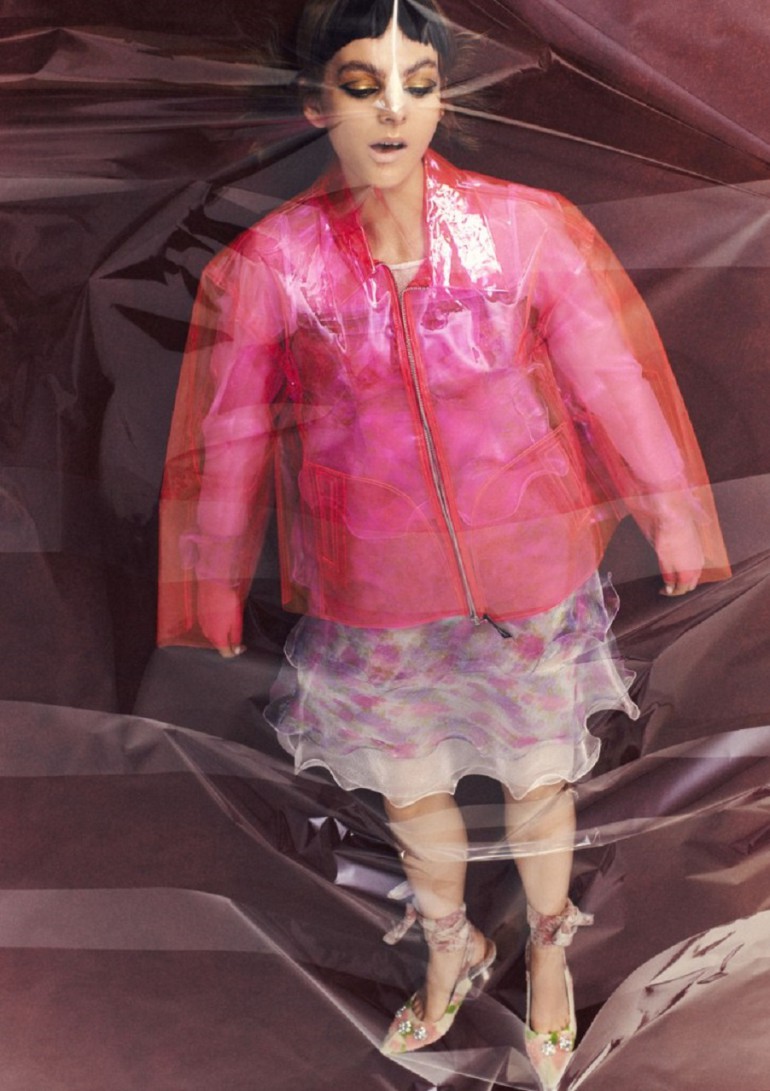