Katie Moore plays a fallen angel seeking new wings in “L’ange déchu” by Txema Yeste, Numéro #178, November 2016. This story presents an opportunity to reconsider the boundaries of certain verbiage. Words have meaning. Here we have placed upon this pictorial our past understanding of the term… fallen angel. So what I offer forth is a challenge. To break free from our “wicked” world, and consider a definition that moves beyond such typical depictions. That’s not to say any one term is innocent & the other evil, rather, I’m looking for something that instills a greater sense of context. The depth by which we go to search out and attach such meaning, is as much a considering factor as is the final decision. And here in lies my message. Is what we are searching for any more important the effort it takes to get there? Is the final destination our final stop? I hazard a no. For what I am compelled by is the journey.

Patrick Mackie brings to the page one of the most compelling constructs of couture that we’ve seen this season. Allowing black beauty to cover the body like a siren finding song. High fashions find a true calling as forward fabrics pay tribute to nature’s earthly elements. This is not a picture of pagan rituals, rather, it’s one that celebrates the ingenuity of modern design. Yeste rises above the clamor, using still shots so compelling one would bet they are in motion. Natures’ unequivocal excess is seen, as trees expand and the land seems to breathe. A moody mix of a fog and fantasy. The bold backdrop provides a visual landscape, with images that look like portraits painted on palettes. Careening through the camera’s lens we watch as Moore makes her way over humanities wall.

Monochrome makeup appears as Tyron Machhausen mimics the color of scorching coiffure. Her fair skin radiates the light allowing beams to bounce off her cheeks and onto the film. Brows are bleached into submission, whereby what we see is simply an echo of what once was. Vermilion tones take over, as a similar shade touches every feature on the face. Lashes are left empty as burnt red races around the entire lid, leaving nothing in its wake. Beauty propels forth while her blue eyes penetrate the page. And the mouth exudes a just kissed hue, with lips that mimic a similar pigmentation. Edward Lampley brings a 40’s vibe to this modern dew, by creating a forward version of Vidal Sasson’s iconic cuts. Red radiates off of the head matching the tones of the hair with the embers of fire.

Hungering for this kind of raw imagery. Artfully exposed dutifully derailed, this is fashion photography at it’s finest. When the conceptual landscape mirrors the virtual intent, then what we have is creativity captured an unexposed. I’m sure you ask, as you should, what do you mean – unexposed? Isn’t the whole goal of editorial work to reveal? To somehow cajole, the innovative and interesting among us, that has a penchant to hide? Or in easier vernacular to get the ungettable get? An obvious question, that deserves a somewhat obvious answer. In truth, I believe what real artists set out to accomplish is two-fold. First they try to relay a message in its original form. That’s not to say an image isn’t already artfully altered, rather, the ultimate intent hasn’t been disturbed. Then the next step is to move on and transform. To bypass any one thing is to take it from one form to another. By enjoying such a success, Txema accomplishes something most find utterly beyond the pale of promise.

Nature tells the real story. Standing in front of a wall made of fog, Moore mimics the tree trunks as she is poised in poetic reflection. Yeste conjures with a camera allowing us to enter the country as visitors. Coming not to destruct or destroy, rather, to honor and obey. Blessed with beauty that is beyond our belief, the rule of nature unequivocally states that all living creatures are to be created equal. Perusing each picture, we are reminded that this is an artistic masterpiece. We often take for granted the talent it takes to accomplish such a feat. Forgetting that the photographic mastery we’ve just witnessed is nothing less than genius… Beauty beckons from another world as Katie stands under an arc made of bark, grown graciously overhead like a rainbow carved in wood. 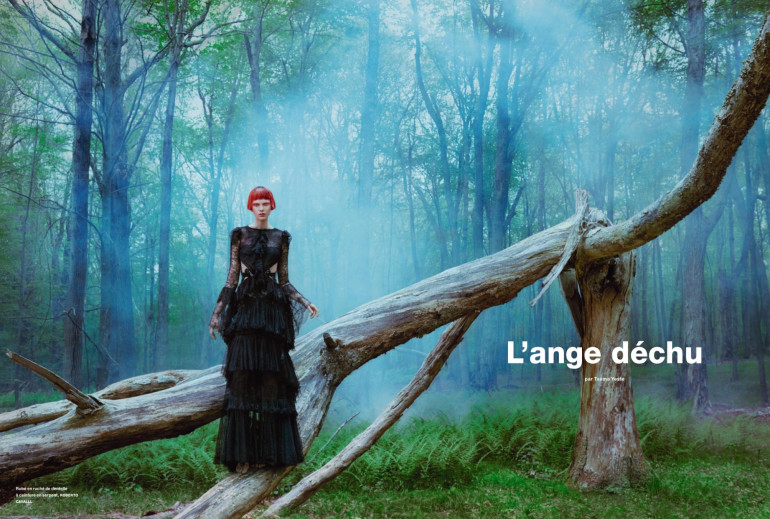 Txema Yeste Ushers in Season of Strength for Numéro