Lili Sumner falls head first into a high fashion fairy-tale, in “Dreams About Something Bigger” shot by Txema Yeste, Vogue Russia December 2016. Creativity wraps around the imagination as art encircles the mind. Olga Dunina reminds us how deep we can dream by showing us how big we can go. A long gown and draped overcoat work like a projection screen with a story told in visual display. These forms have been elevated from their standing as mere fabric, into a place of symphonic mastery. Decadence defines the scene with each piece crafted like works of stunning sculpture. Textures titillate as textiles transform, changing high fashion into a modern fairy-tale. In the name of drama we are asked to forgo our ideas of editorial excess, in favor of a tale told through the craft of couture. Transparent fabrics fly through the sky as see-thru dresses drape on high. Fashion & fantasy fuse allowing design to dictate visual display. Black Chiffon wraps around the shoulders, exposing the feathered accessories below. Projecting a sense of feigned weakness she falls into the arms of her dark, masked hero, while fiery legs seem to extend forever. Sitting on a floor wearing nothing but a suit made of red ~ Sumner looks like a nymph with a secret.

Decadence defines the times as Marie Duhart allows each feature to take us in a new direction. Lili stands as white lace surrounds her entire face in one of the most dramatic images of the editorial. Her skin lights up like a flower in bloom, with one eye colored in a deep orange hue. Chiffon explodes all around as she stays in the center as material builds out. Bleached out brows give the guise of being gone, letting those big saucer eyes swim in a pillowy pool. Blue goes crazy with lines drawn in either direction, while one line drives through the eye and the other wings out the side. Powder falls over her face as her milky skin gives off a glowing allure. The nude illusion is infused with a hint of color, as angelic lips are kissed with a natural hue. Painted legs peak from beneath her torn dress, as beauty breaks into another world.

Franco Gobbi creates coiffure that stands by one mantra – conversion is the thing. Haute hair transforms with changes that feel less about adding wigs than the insertion of ingenuity. Gobbi crafts his heads like works of clay, with each one delivering something unique. Embellishments are worn like a masque made of diamonds, with wiry extensions that stick out the top. Txema’s set soars allowing inspiration to come in many forms, as Lily lays peacefully over the swan with their long necks mingling in poetic display. 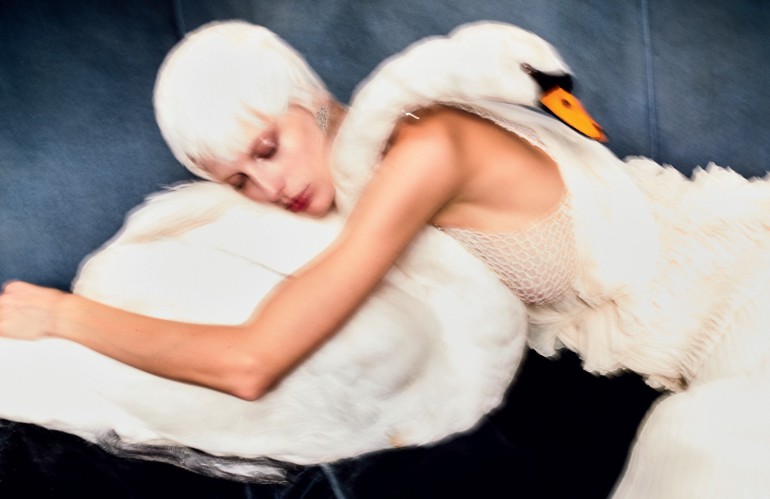 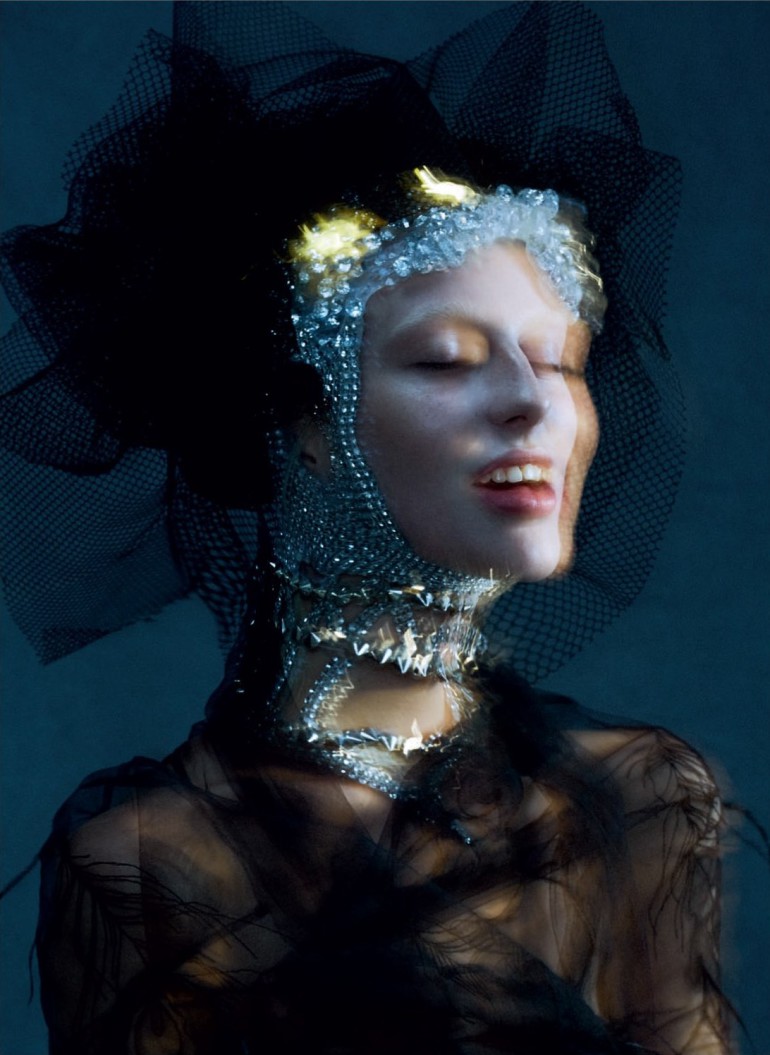 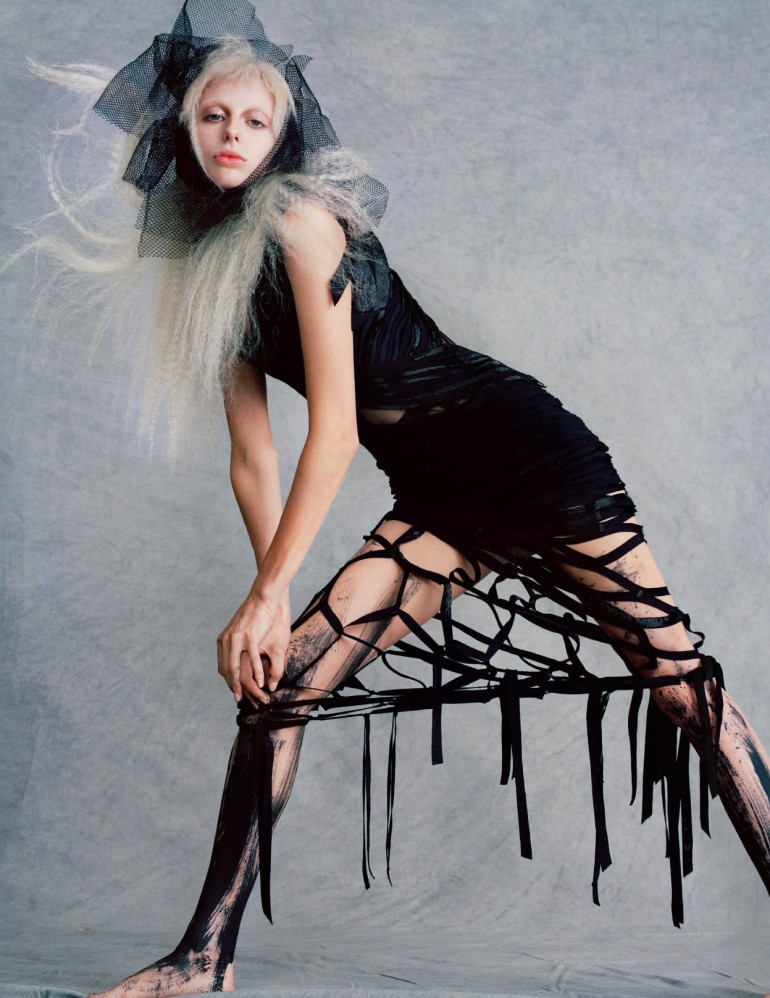 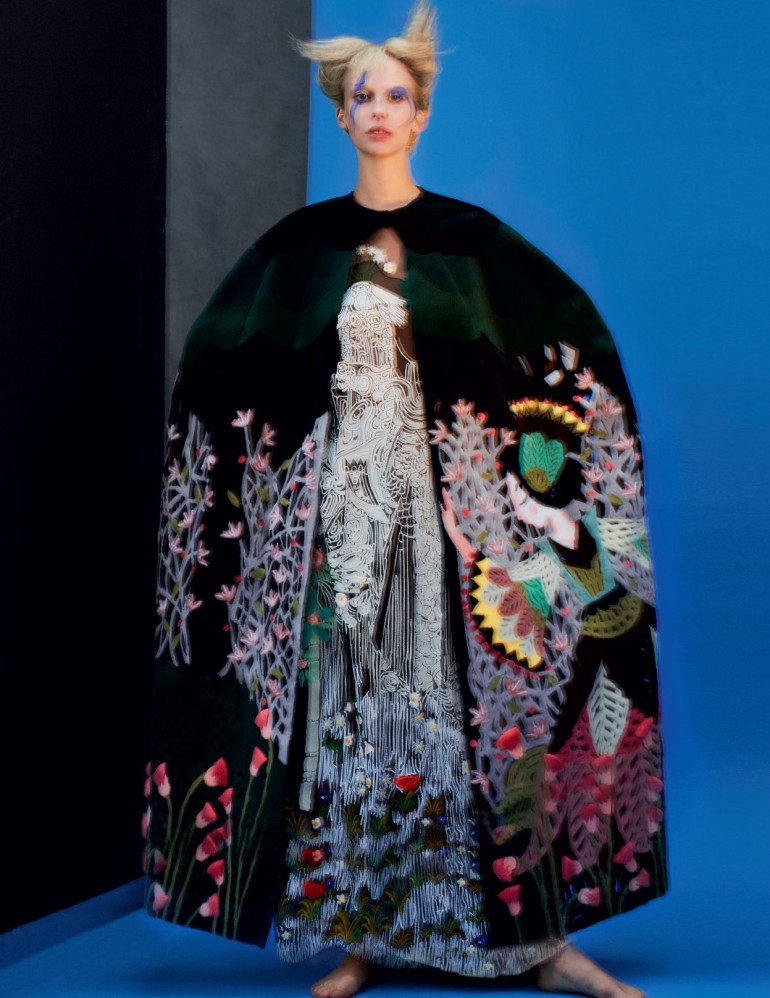 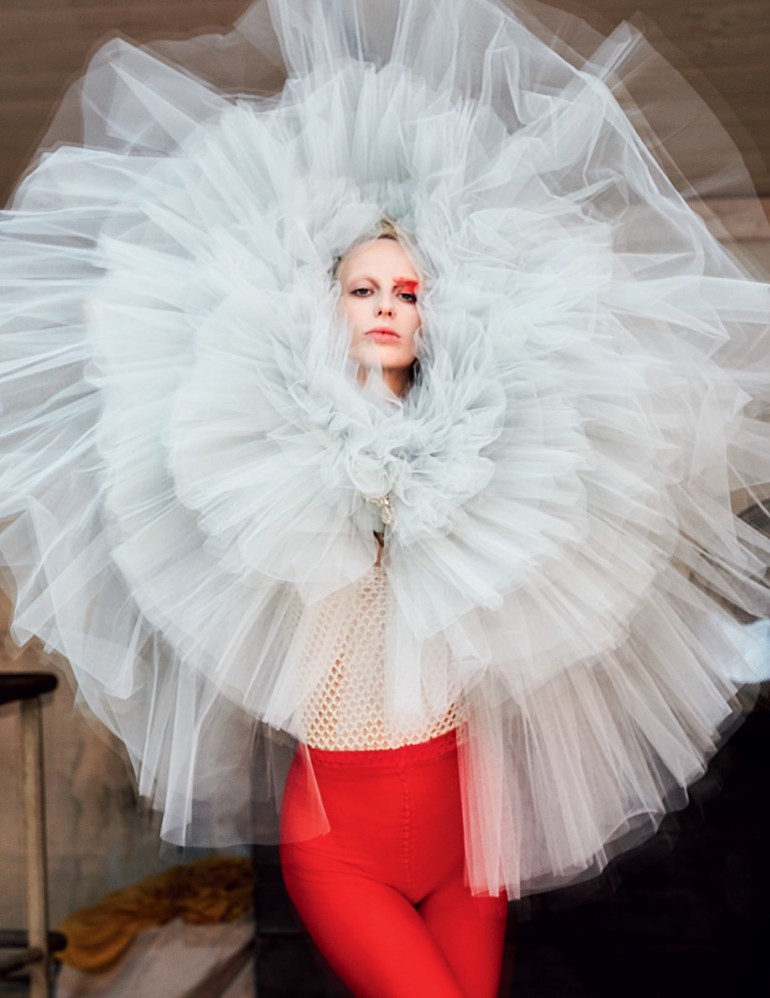 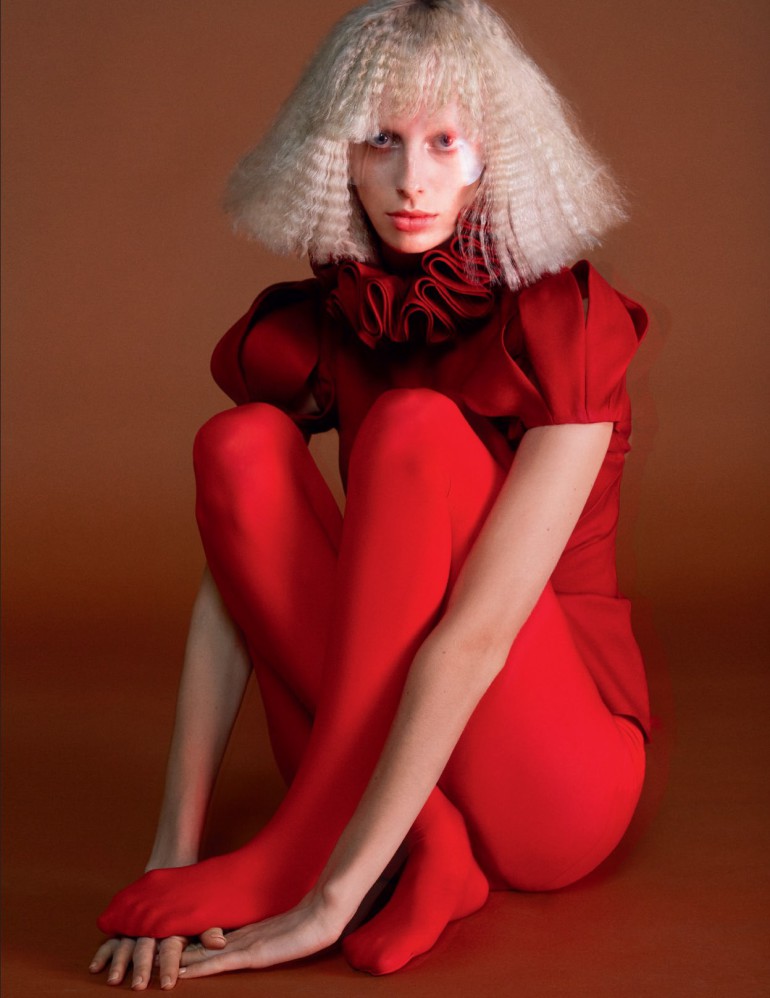 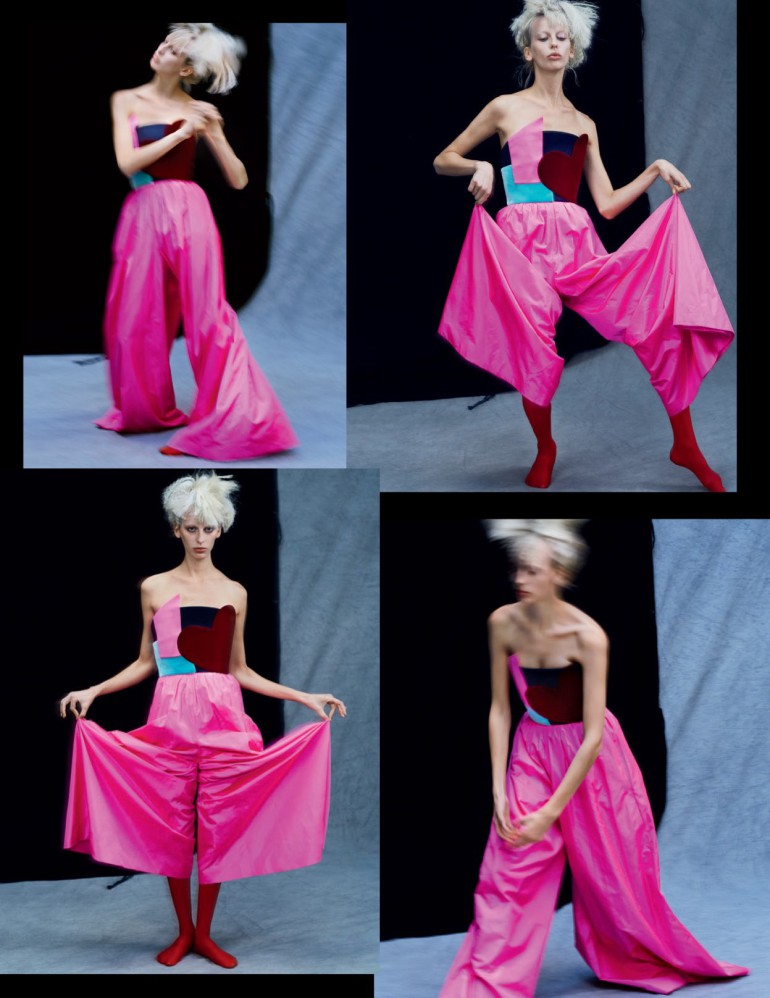 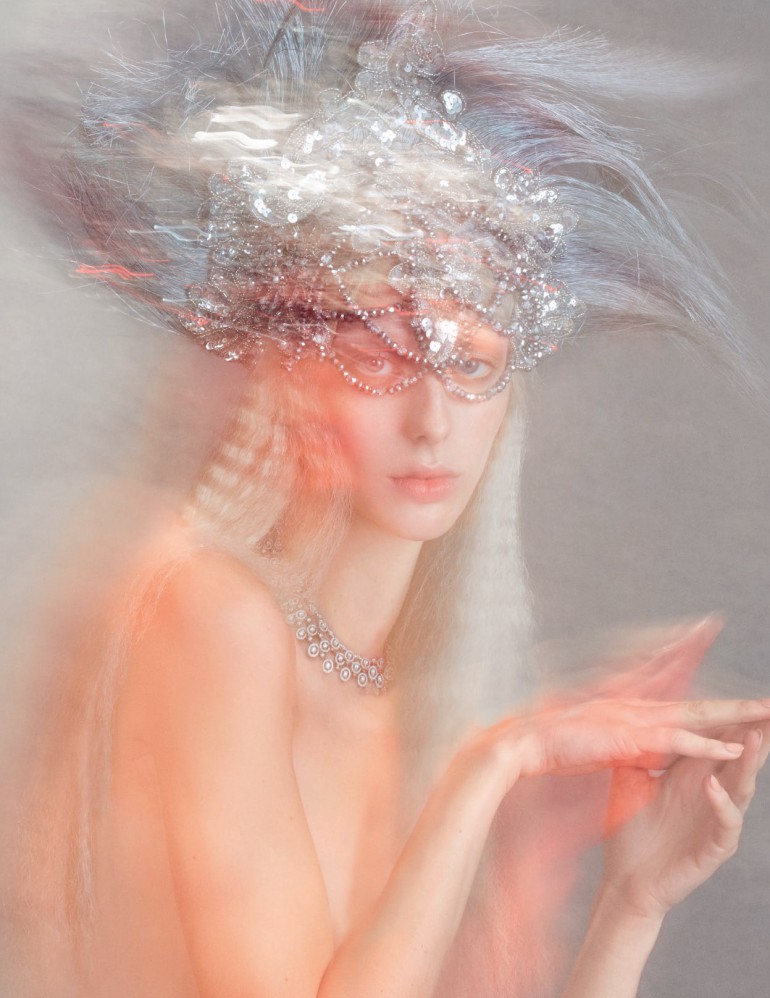 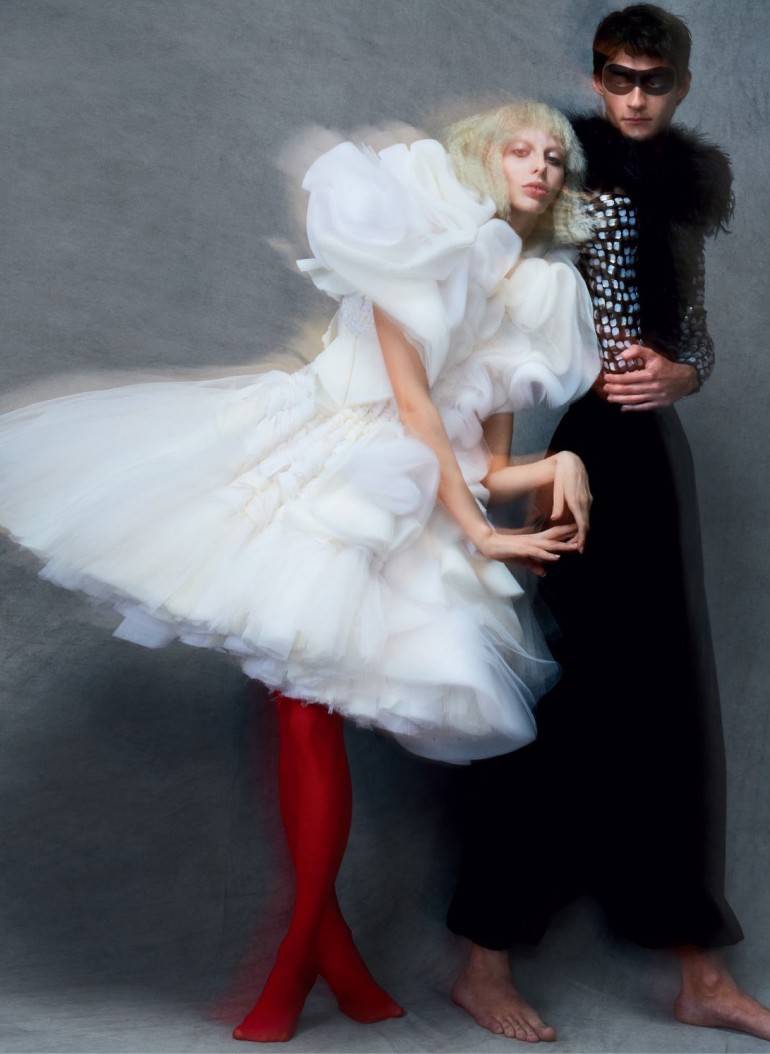 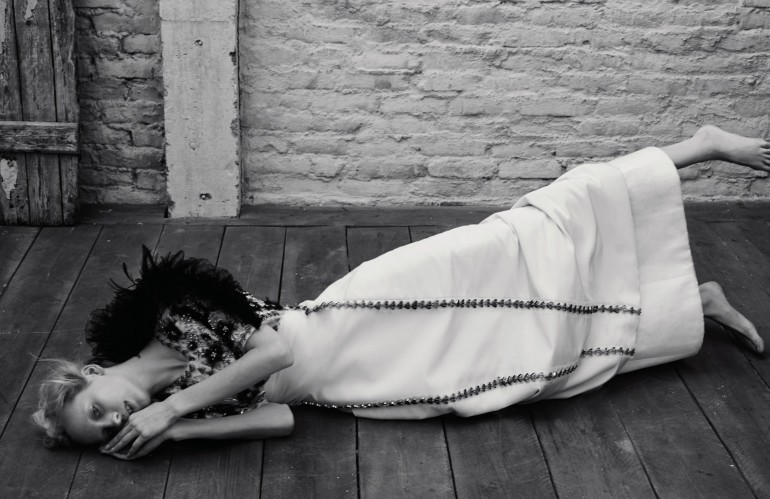 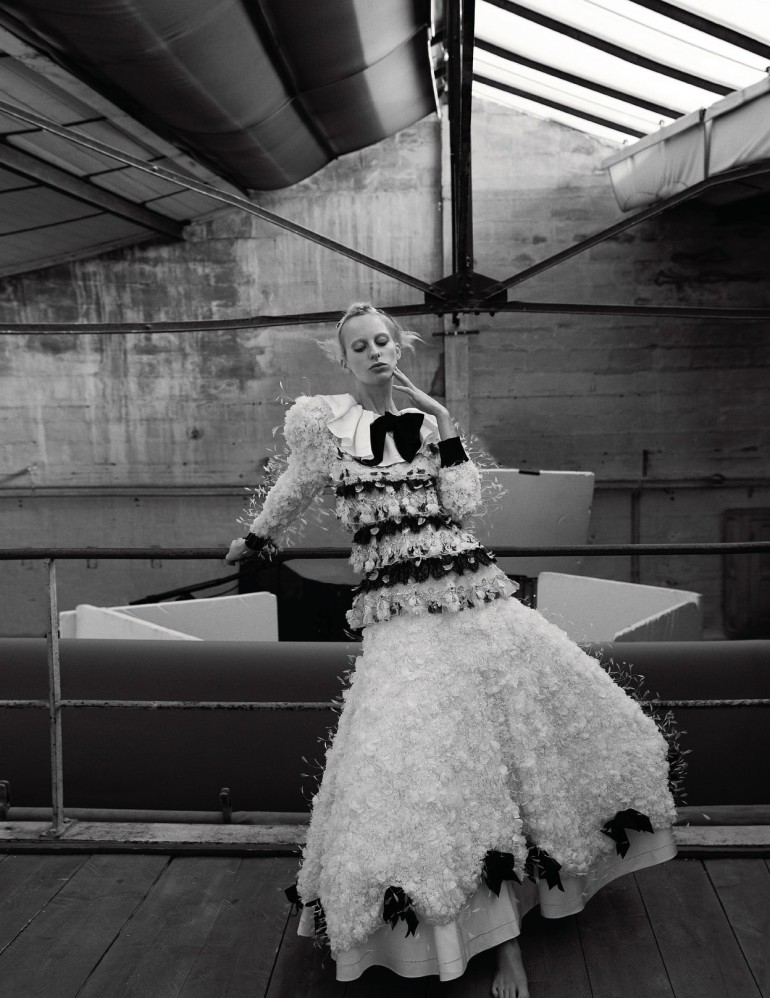 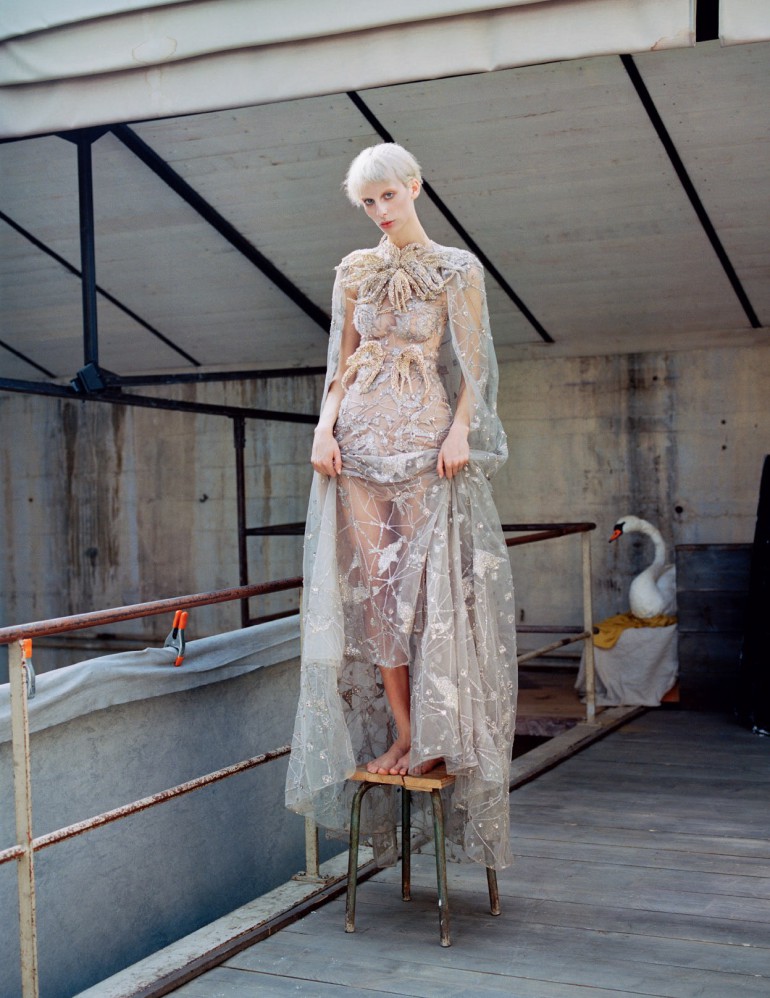