Jena Goldsack stands tall as she embodies the ferocity of the female spirit, in “High Style” by Txema Yeste for Vogue Russia, February 2017. Reaching high she can touch the sky, rising high in triumph over the rooftops. Txema captures our thirst for the extreme as Jena ascends strong in the middle of a dream. In one of the most dramatic stories of the season, this plays with proportions as it elevates the excitement. Our relationship to that which we are viewing becomes an important element in the visual landscape. Shapes create a sinuous silhouette, but here, it’s height that captures a sense of superior style. Yeste plays with scale, as he gets us up close and personal with optical photographic illusions.

A revival of epic proportion has arrived. Paying homage to that fabulous film from the 50’s, Attack of the 50 ft. Woman. Decadence defies the imagination, as this shot captures the over-sized theme with brilliant details. Art & excess fuse together, with a neon palm tree extending to the sky. Superimposed imagery sets in motion the concept of multiple exposure. Mirrored graphics creates a ghost like effect, with double exposure capturing Jena’s natural silhouette. Olga Dunina takes the retro vibe and brings it into the 21st century, with shots dripping in silver and gold. Shiny and slick with an 80’s twist. A flash of the past reminds us of the era’s affinity for over-the-top. Her feet are firmly planted as she takes a step apart, exposing the city skyline between her legs. Long and lean she screams to be seen, in all black Balenciaga, from boots to a bodysuit. This gorgeous giant turns to her left, spitting enough water to fly across the sky and bring down a plane.

Beauty brings out the beast as Victor Alvarez transforms this story into a makeup feast. Bold colors are cast across the face, leaving us to gaze in wonder. Going back to a day when bold applications were the thing. Wings are done to the extreme with blue and green shadow that screams to be seen. Eye paint is drawn to mimic makeup from the past, while giving it a hyper-modern twist. Facial artistry celebrates the era of opulence, as a flash of pink blush rushes up the cheeks. Tectonic tones appear in a flash, touching every inch of skin. Colors flow in futuristic form, as an ocean of aqua flies out the sides of the eyes, and yellow bushes over the brows. Luscious lips seal the deal with a raucous, red shine that speaks to the time period. Alvarez invites us to compare, the hard lines of the city scape to the soft angles of her supple skin. Laurent Philippon delivers dews that are utterly reminiscent of the big, bouffant 80’s. Like everything else, her hair seems to behave by the laws of gravitational beauty. Oozing in luxury, Yeste provides a bit of control as he harks back to a time of unrelenting excess. Each image reflects the era’s indulgence, while still reminding us of women’s undeniable strength. 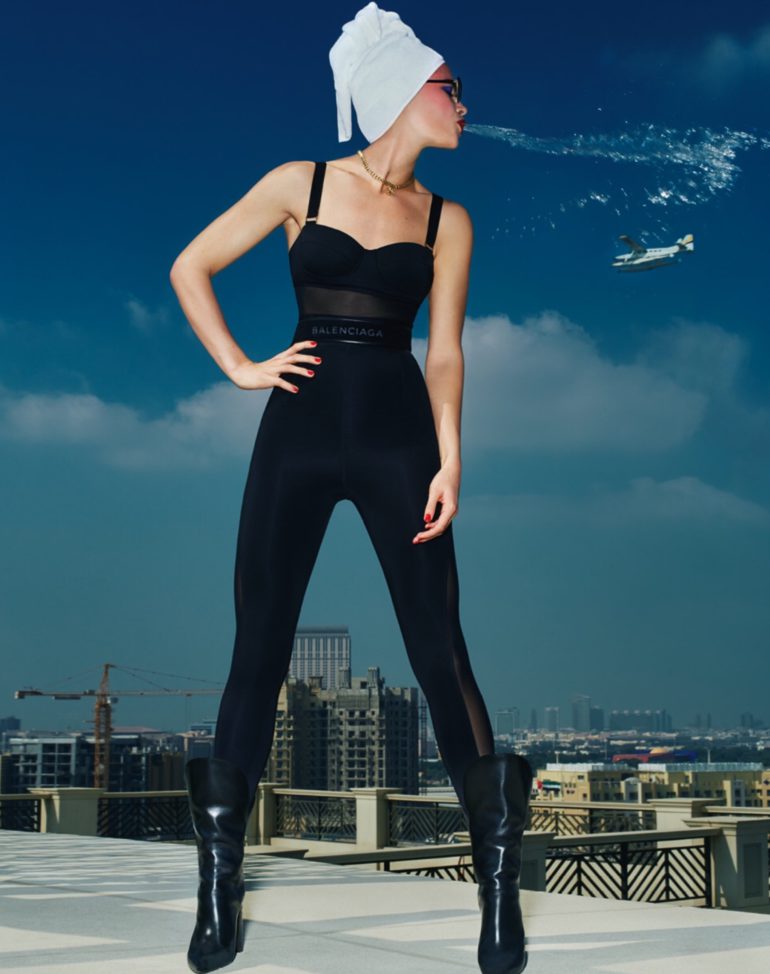 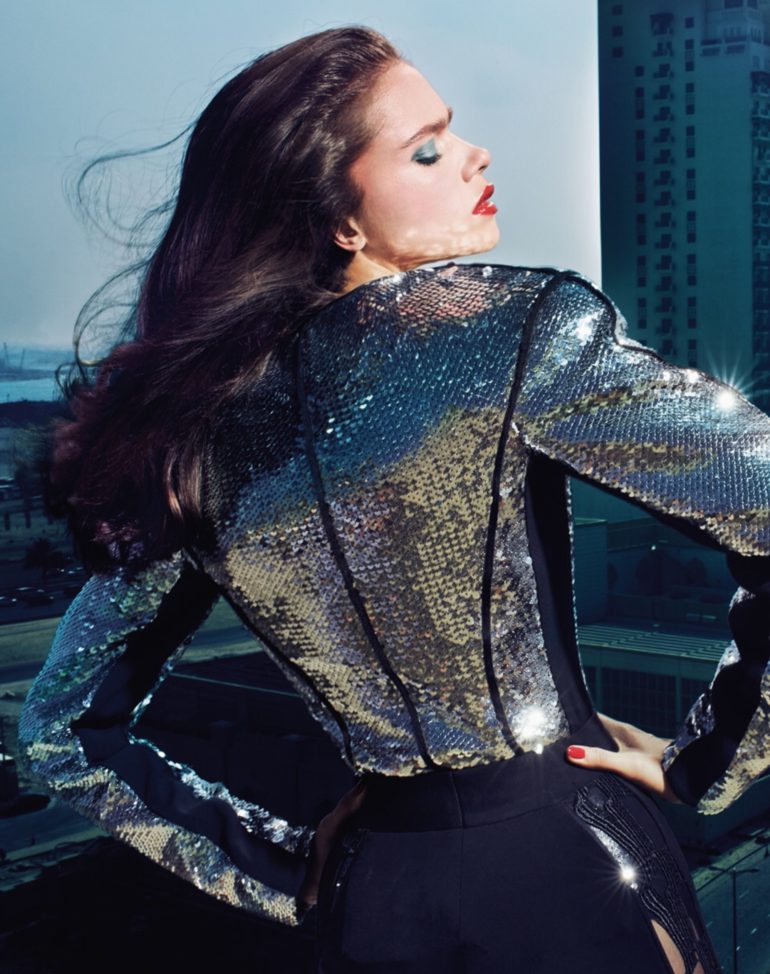 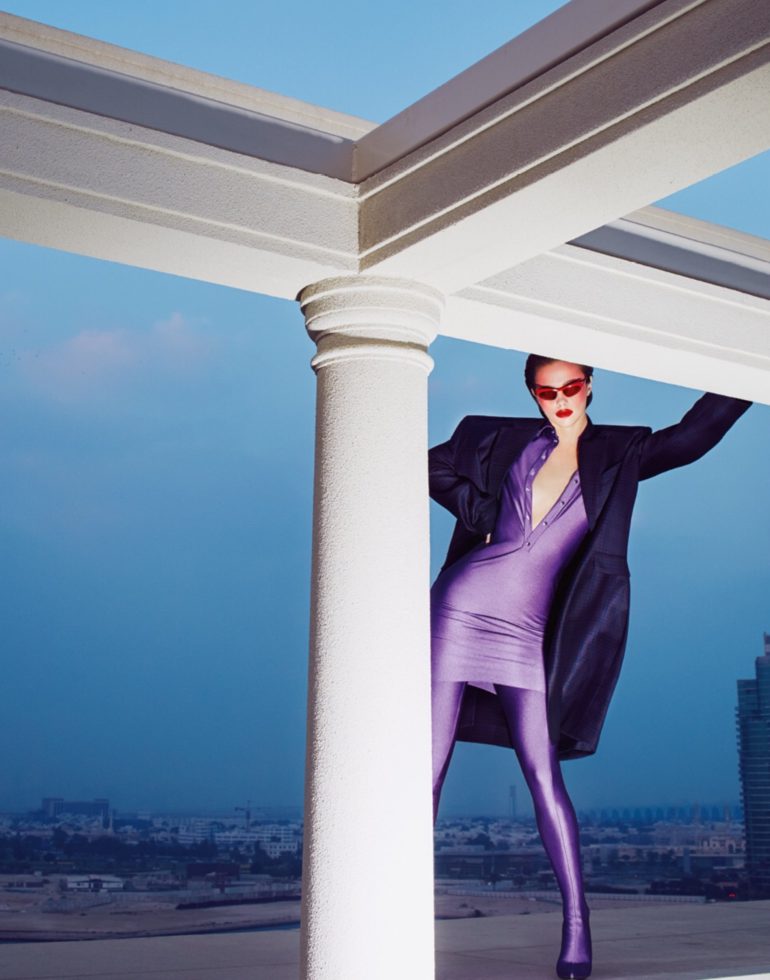 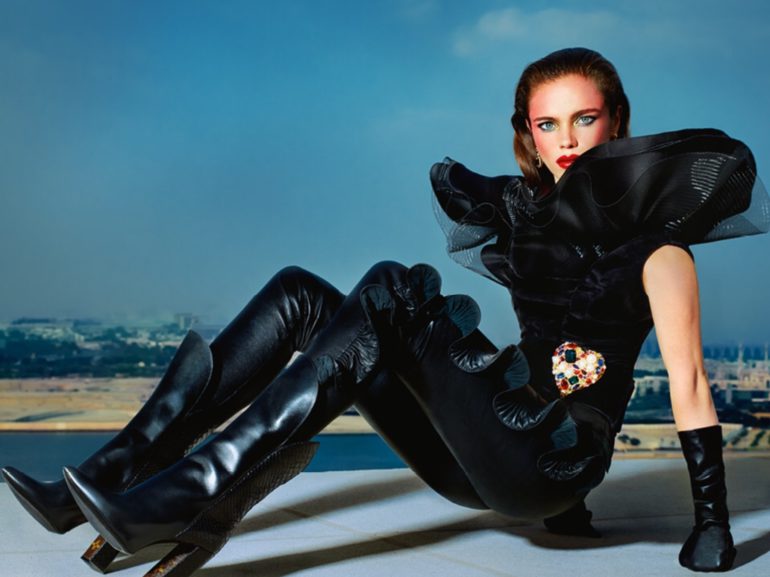 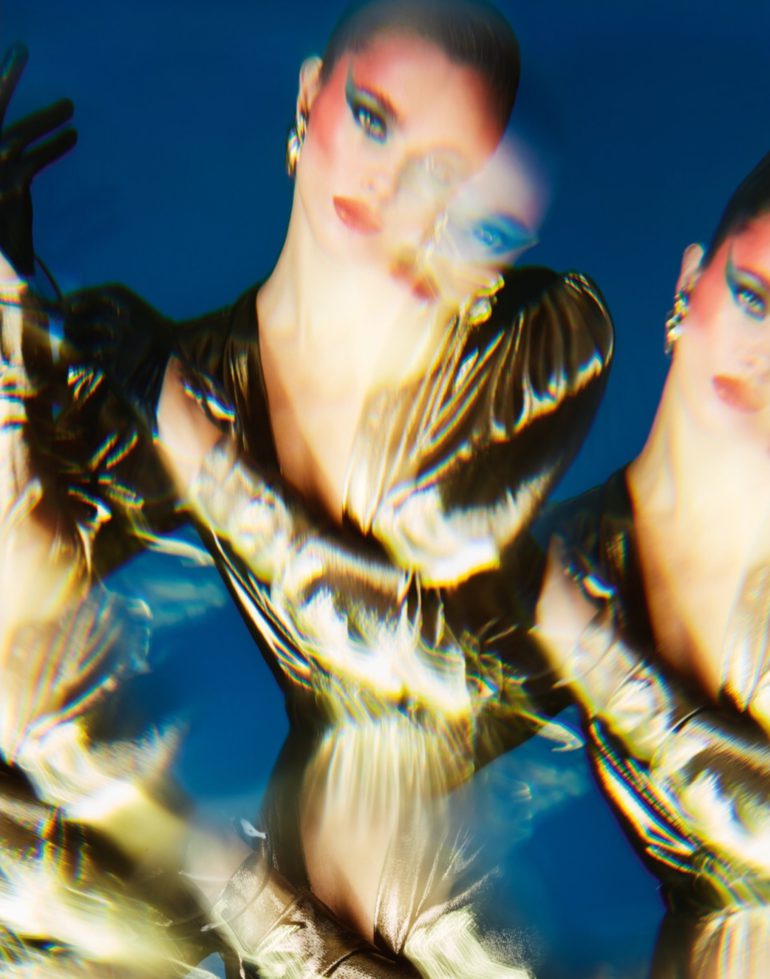 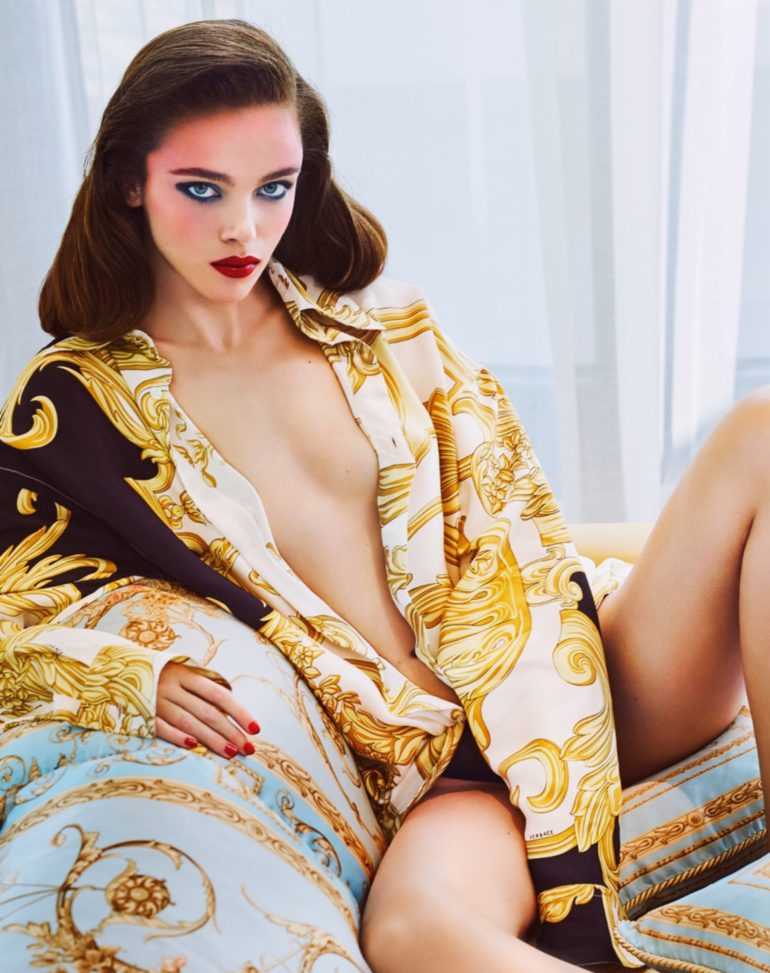 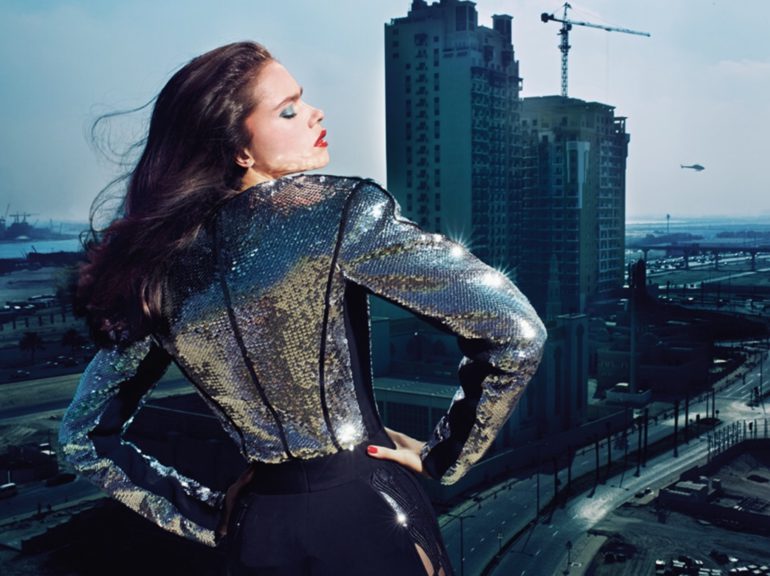 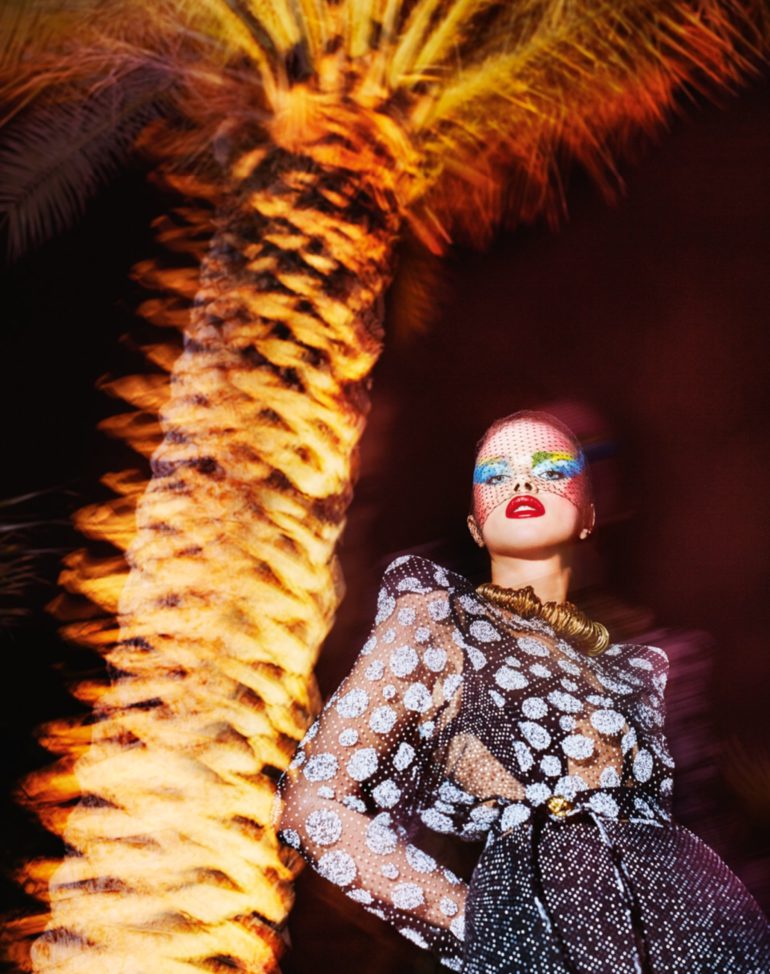 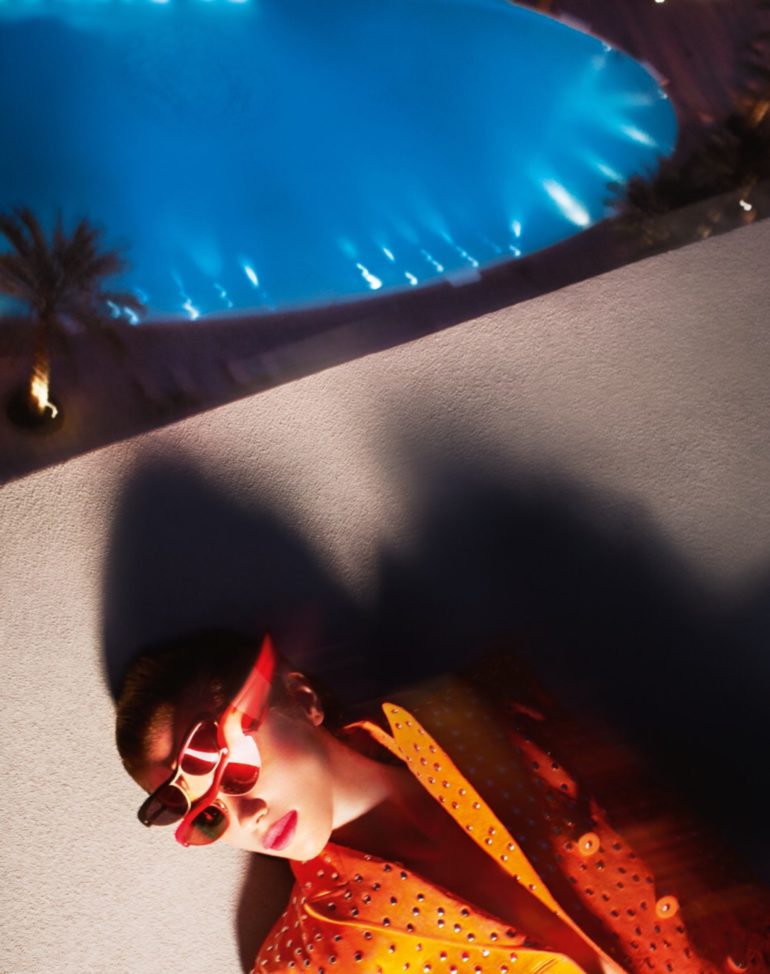 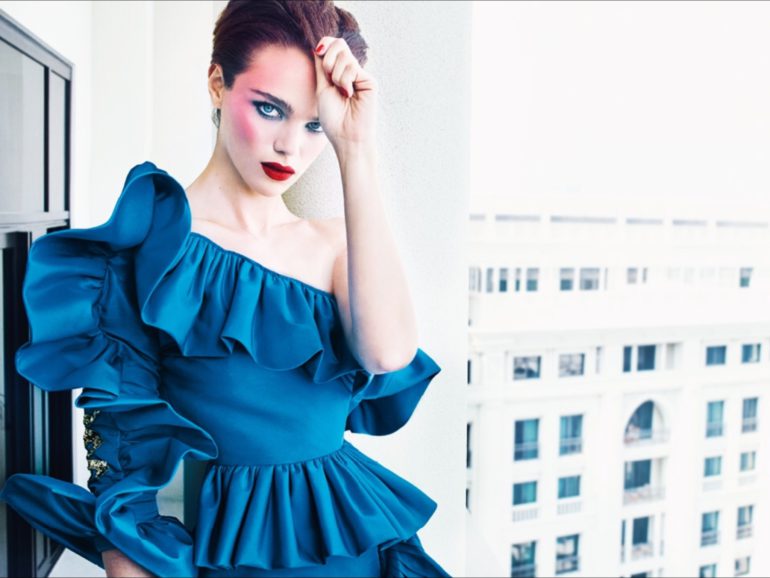