Anja Rubik arouses excitement in “Erotic” by Chris Colls for Vogue Ukraine, February 2017. A dark tale told in the light of day, with a dream like effect that will take you away. Stimulating images send us into another dimension. as Rubik comes in close, for shots that take us back to the age of 20’s erotica. This sassy story was built to highlight the idea of excess. Unlike sexual titillation of more the recent fare, this is a tale told on the cinema of a stare. Real Erotica was built on the concepts found in silent film. Body language began to take center stage, allowing it build upon its natural nuance. Julie Pelipas sees each style as an extension of skin, using the bends to expose the strength of her shape. Caught in the moment, black leather rides over each curve as patent projects a sense of pure power. Allowing skin-tight fashion to find a way, each embellishment adheres to the streamline structure. Going from a slick body-suit to a sleek jumpsuit, they both adhere to the one-sided arm concept. Creativity captures the imagination, with a bustier built by sewing a stack of belt straps together. As we peruse the page we find that the construct of fabrics function as a conduit of coherence.

Her eyes invite us inside as her intoxicating stare will take you there. Moody makeup bares out the beauty of intensity, while suffocating shots make us feel breathless. Devouring that just slept-in look, Maud Laceppe uses black & white as a call to poetic arms. Dark, sooty shadow steals the show hiding one eye behind hair so nobody knows. Mastering the nuance of double duty, Anja slithers around each shot, simultaneously exposing while she’s concealing. The no mascara look gives the face a modern look. Leaving black lines to define the inner eyes, and charcoal to emanate out in smeared form. A just kissed lip drives us crazy with a hint of caramel to melt into the skin. Diego Da Silva gives the neo-dew double duty with strands that work to conceal. Exotic images lend themselves to the comparison of film noir. Taking a page out of the book of bondage inspired fashion, these are looks that purposely blend high-sex with haute couture. Steeped in double entendre, this story aches with a kind of unique intensity. Risqué with a hint of S&M-inspiration, this provocative and erotically charge imagery makes us think of such masters as; Helmut Newton, Herb Ritts, Irving Penn and Richard Avedon. Art and edge have a natural connection as plastique peruses the bends of Anja’s body. Coiling and twisting the limbs of her loins ache to be found. 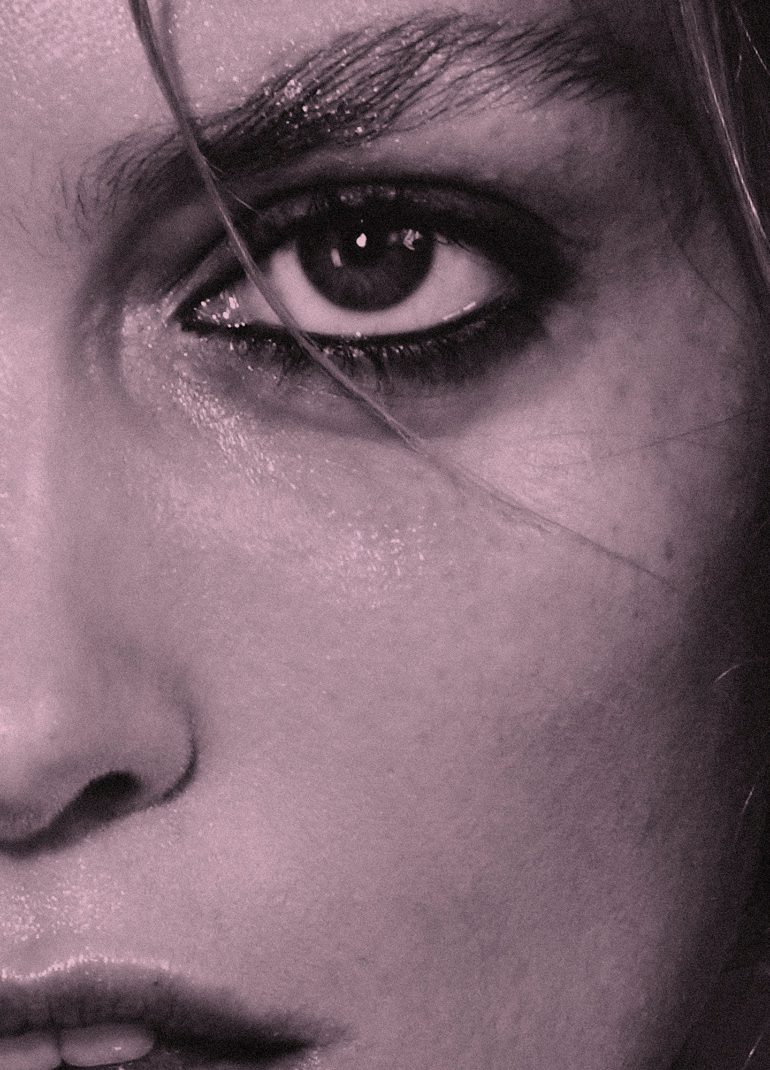 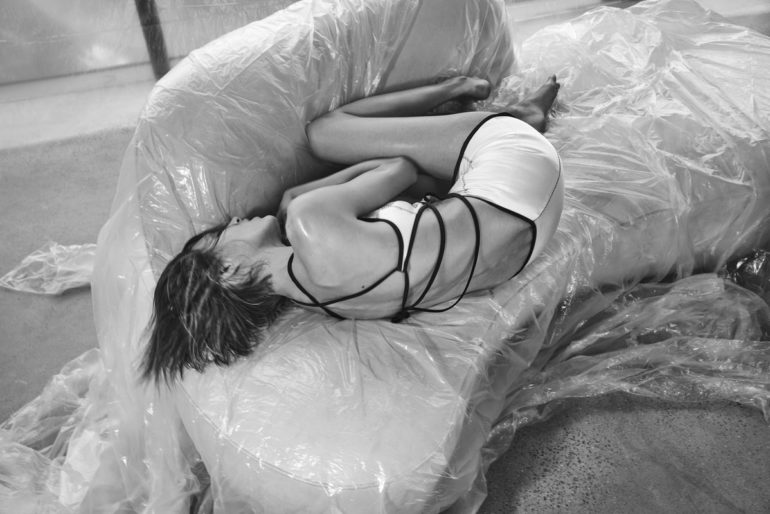 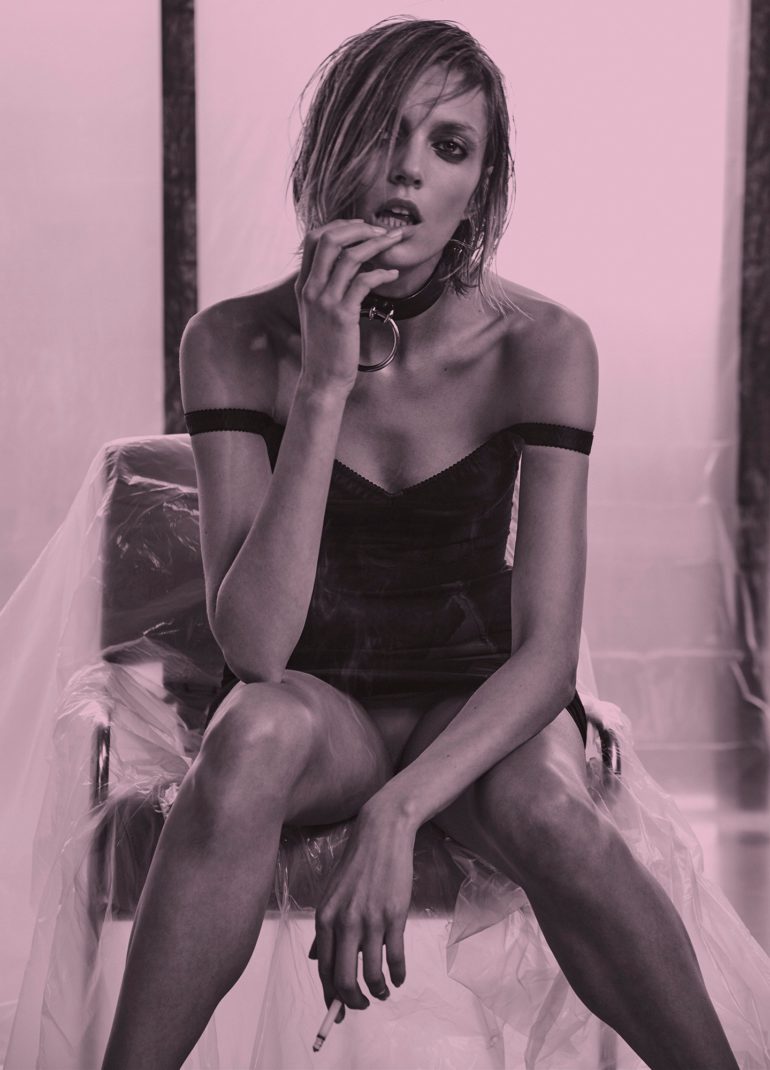 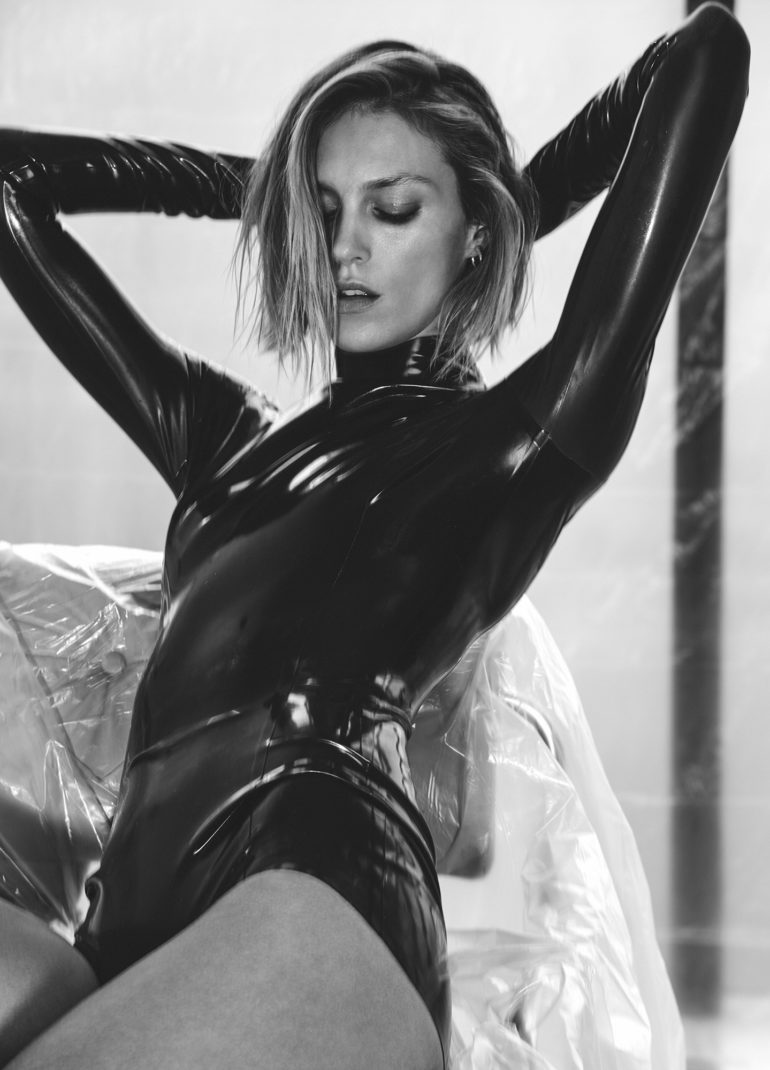 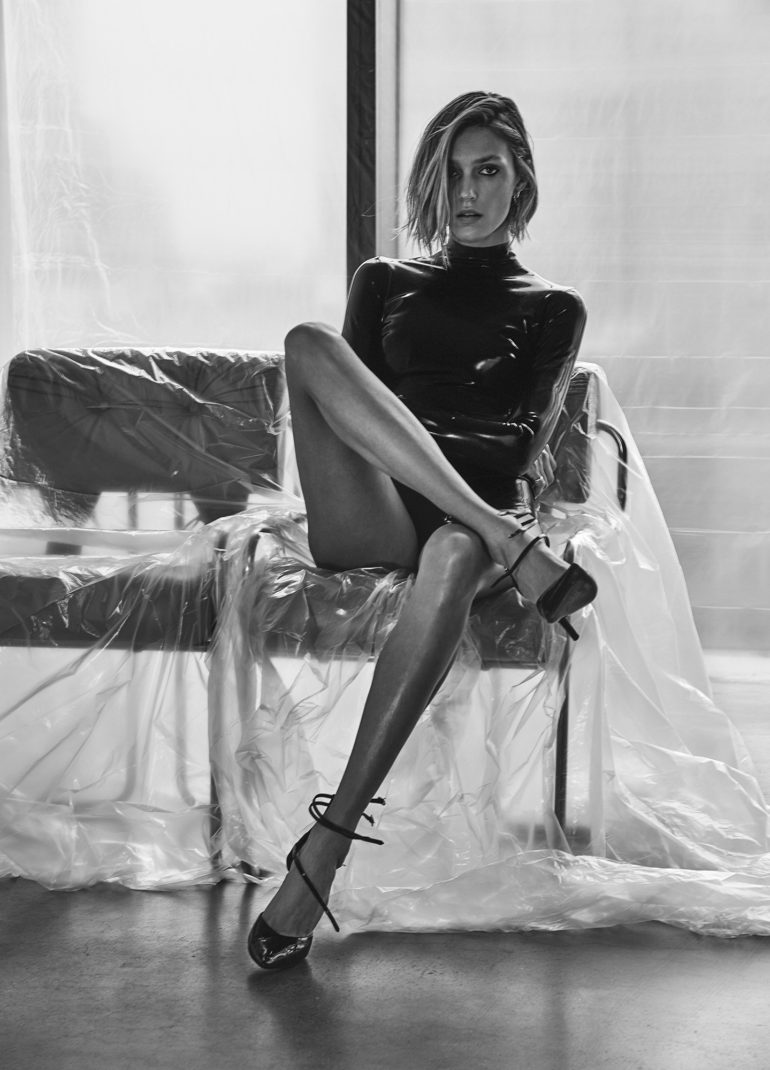 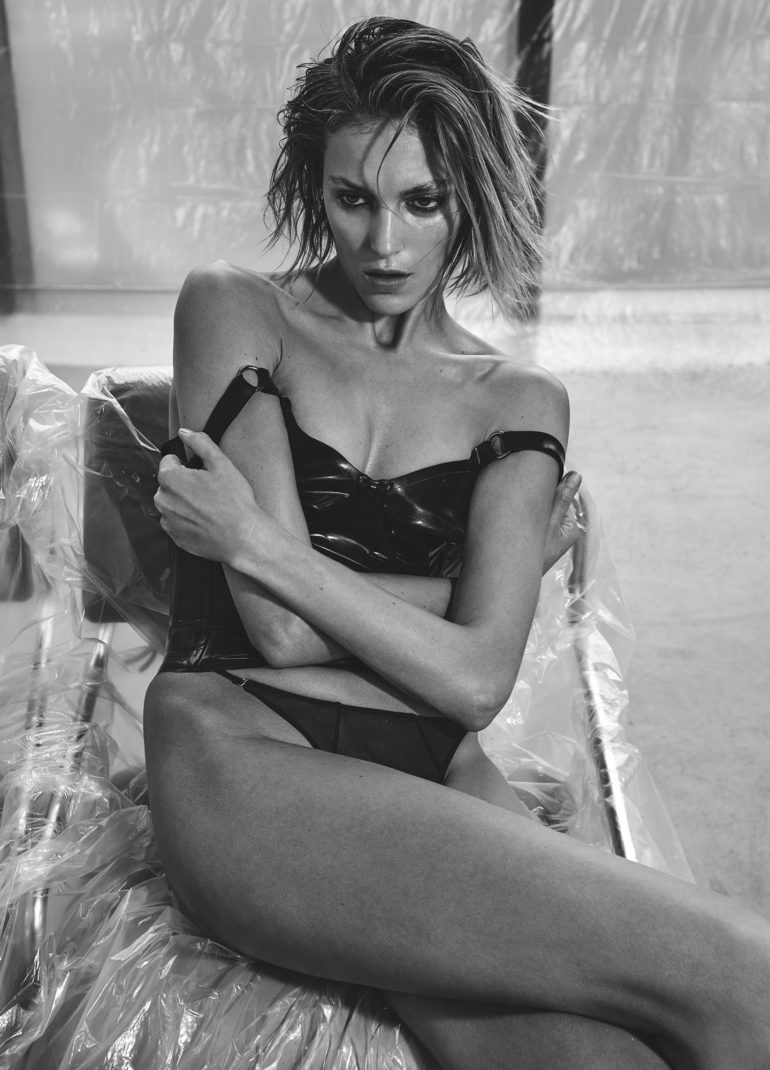 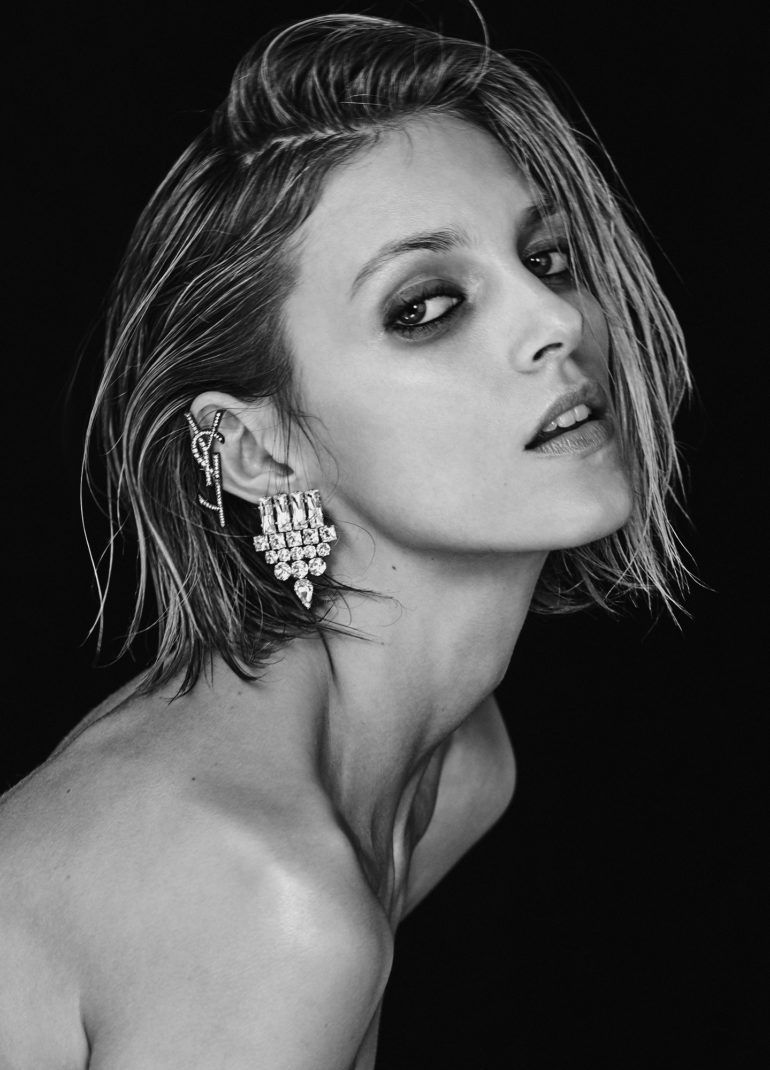 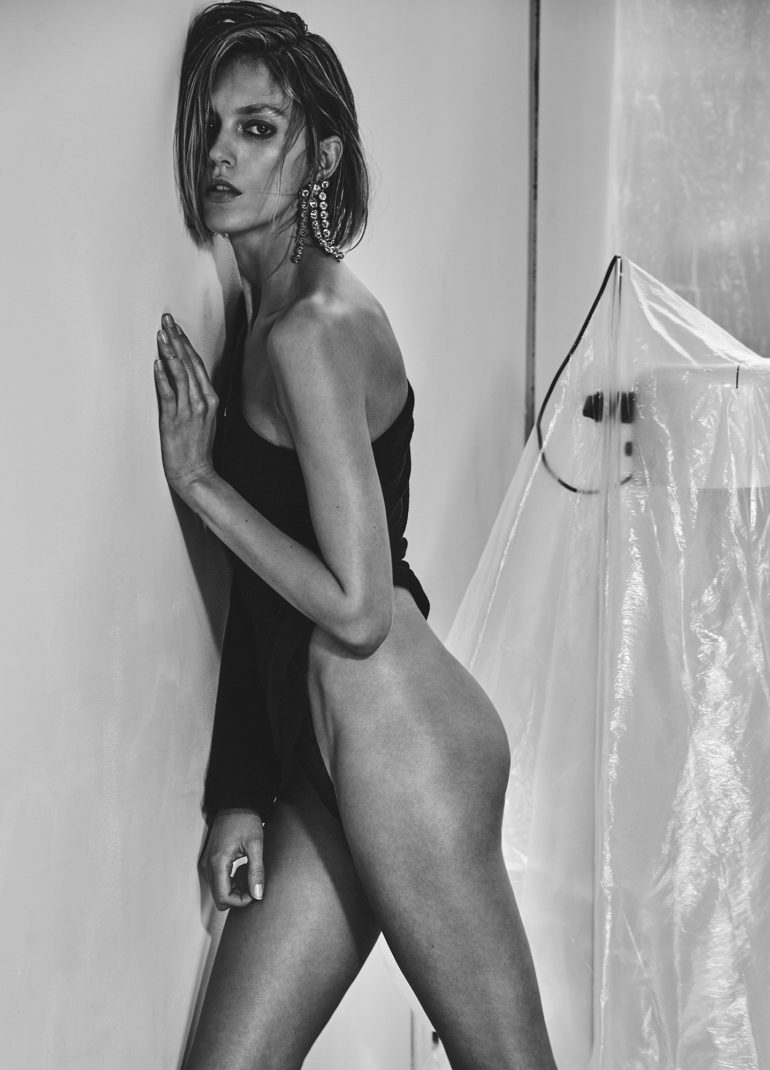 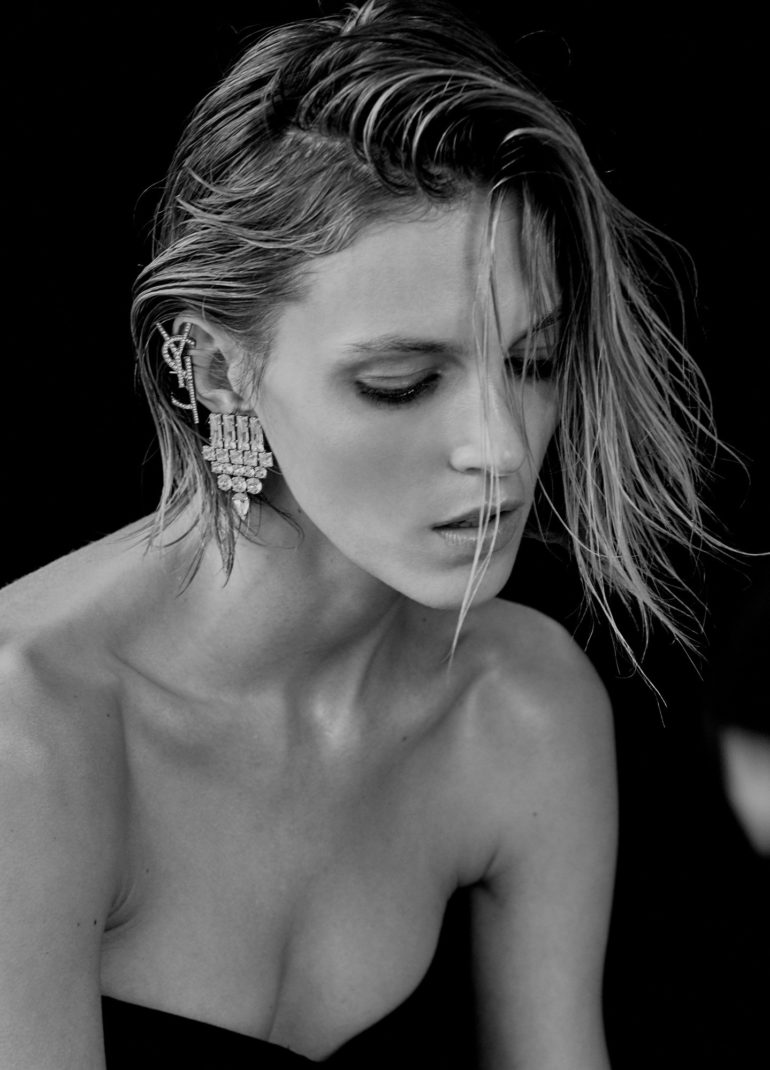 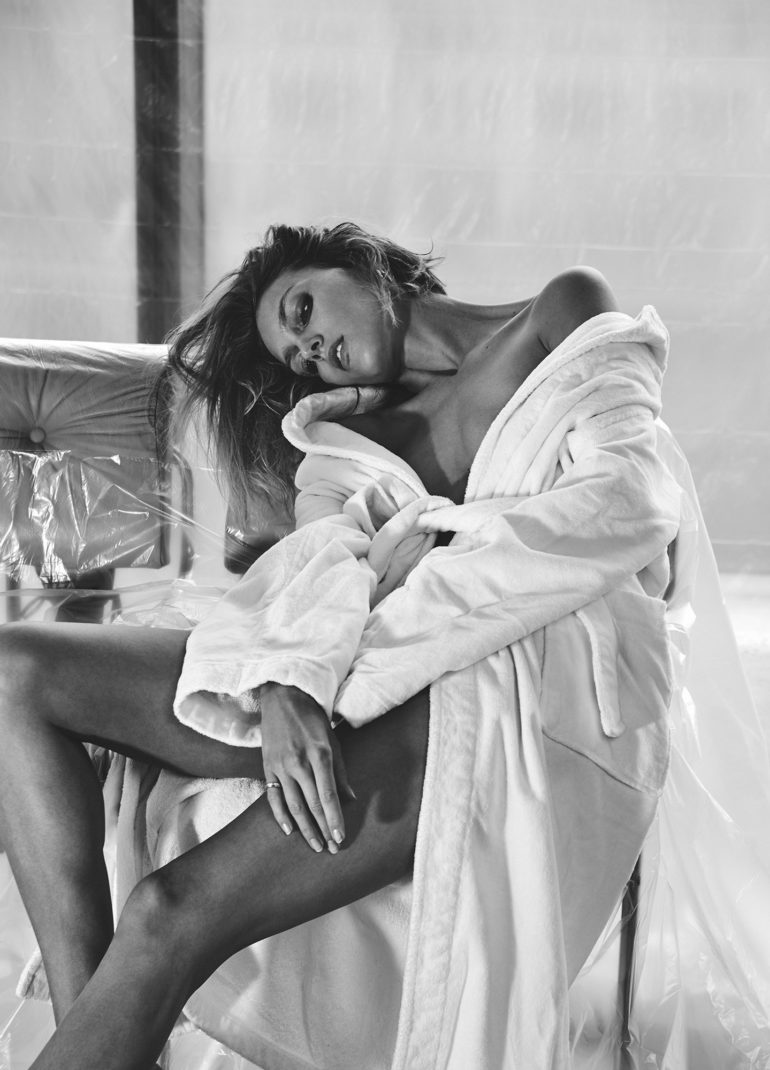 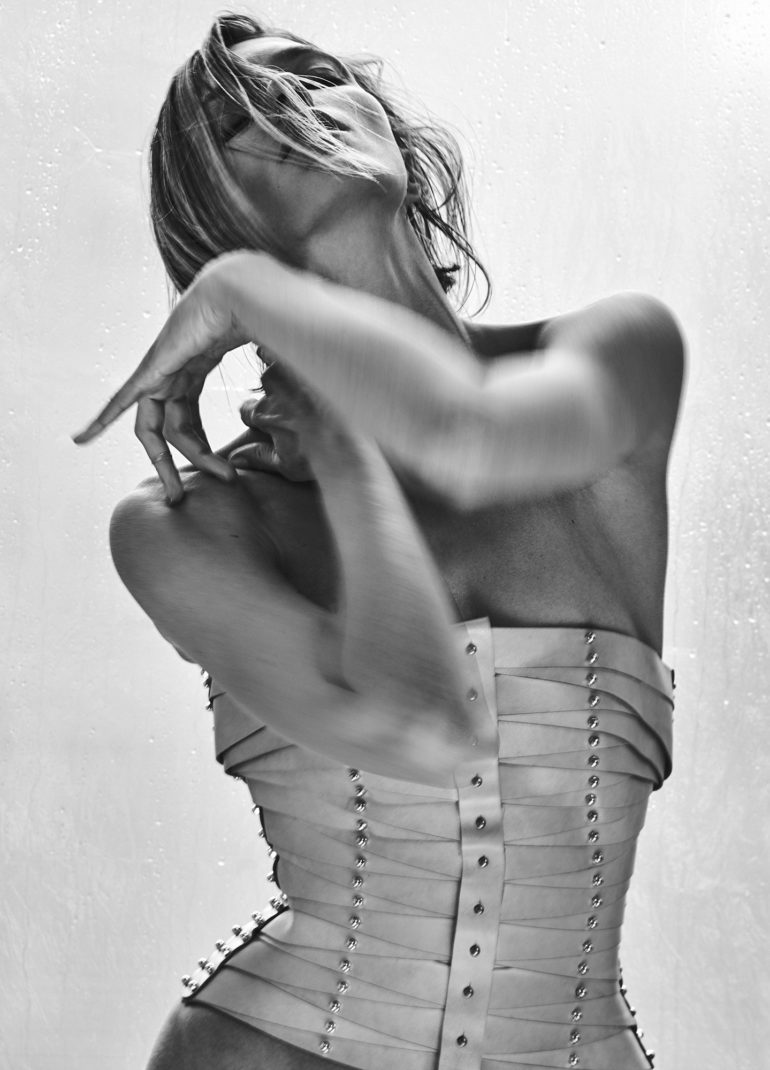 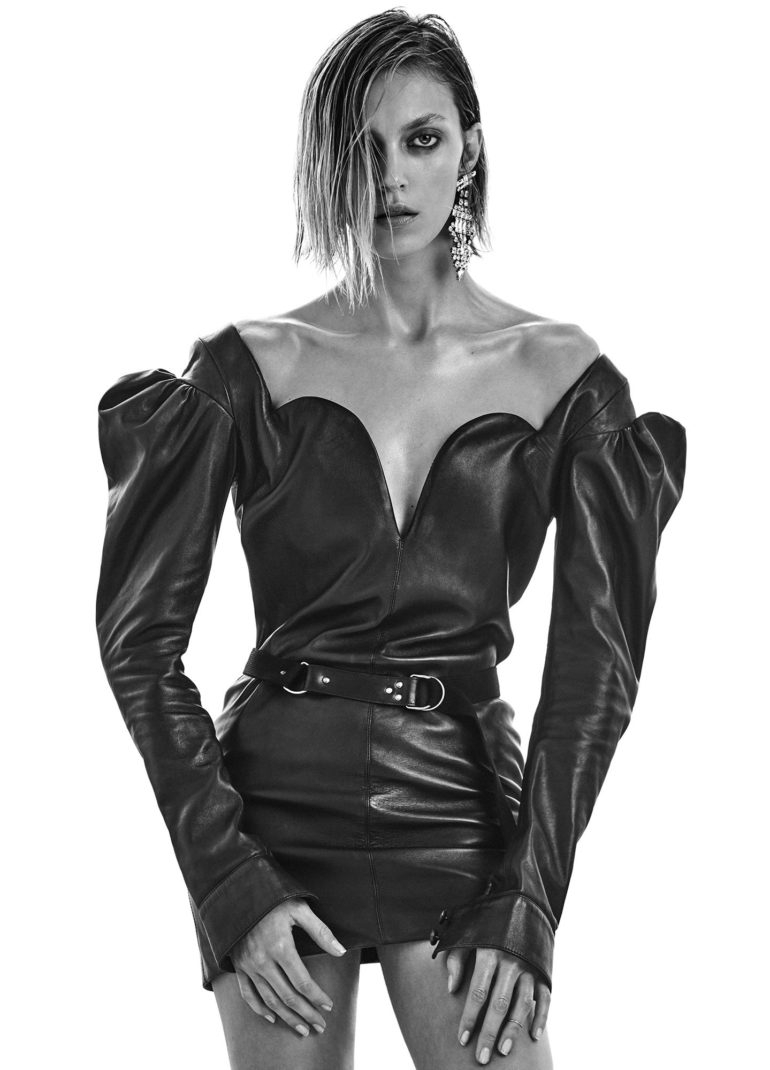 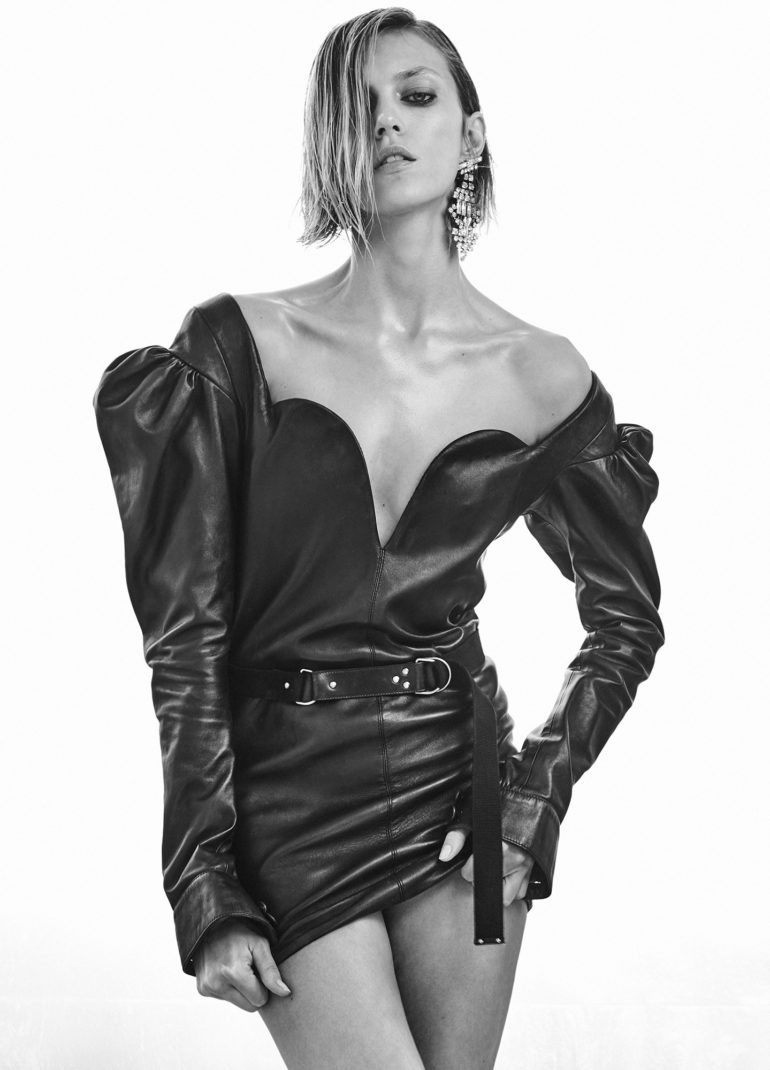 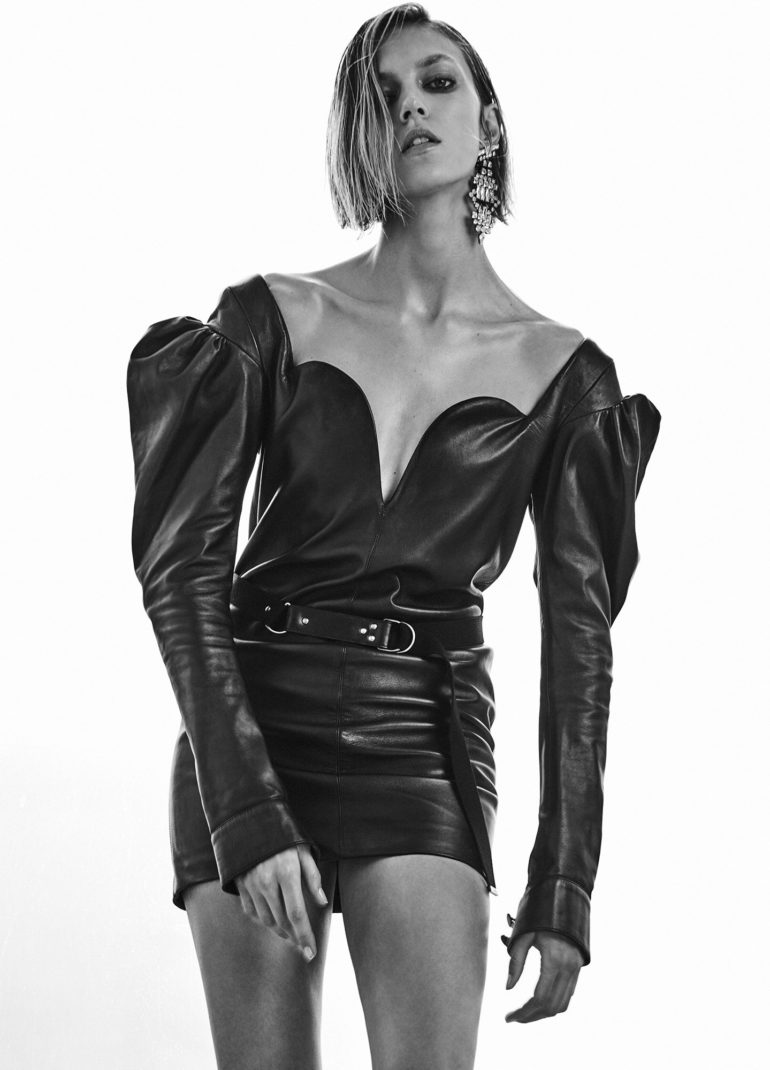 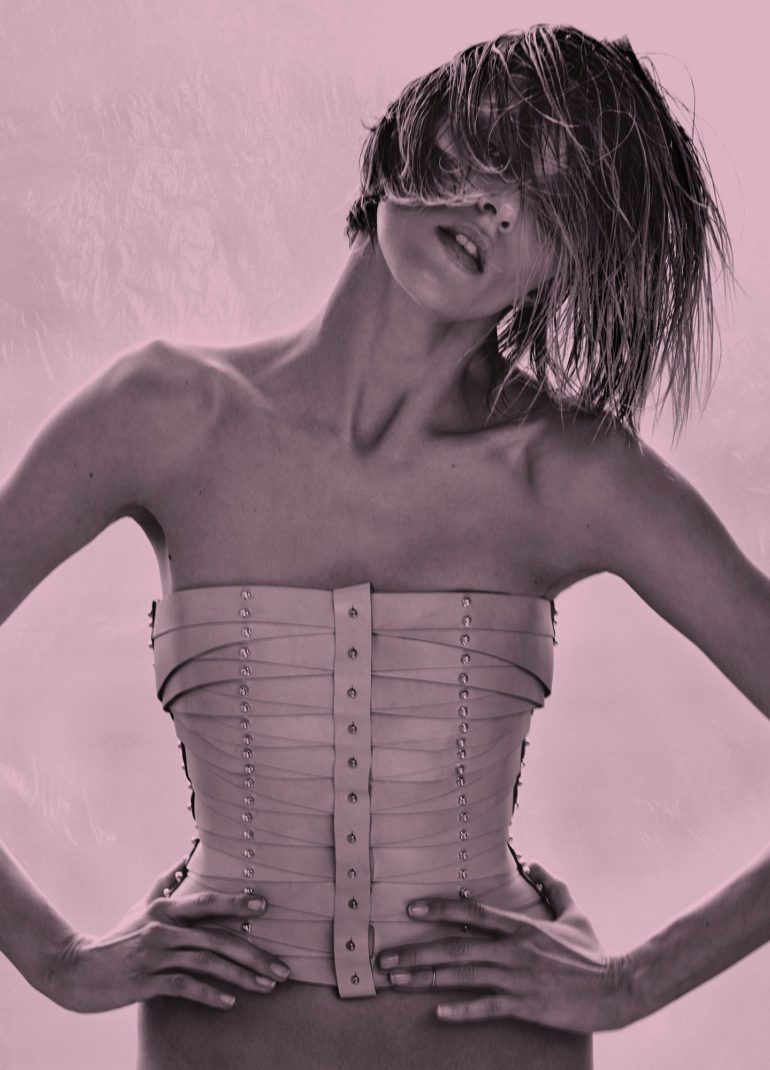 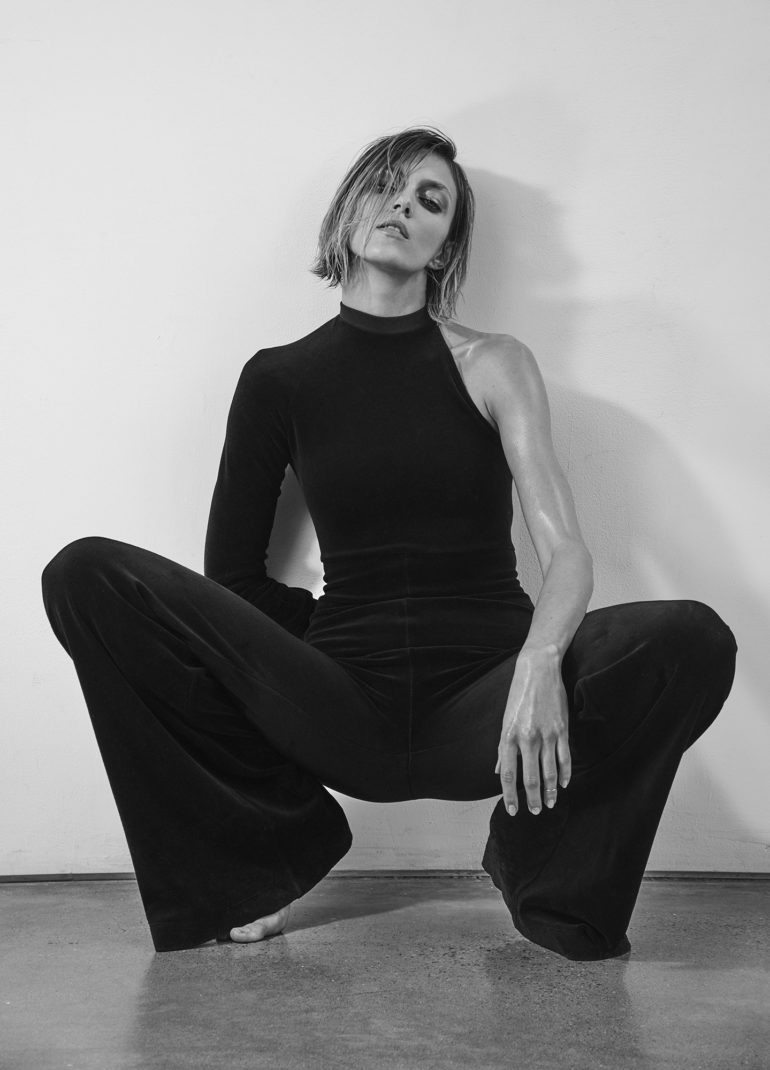 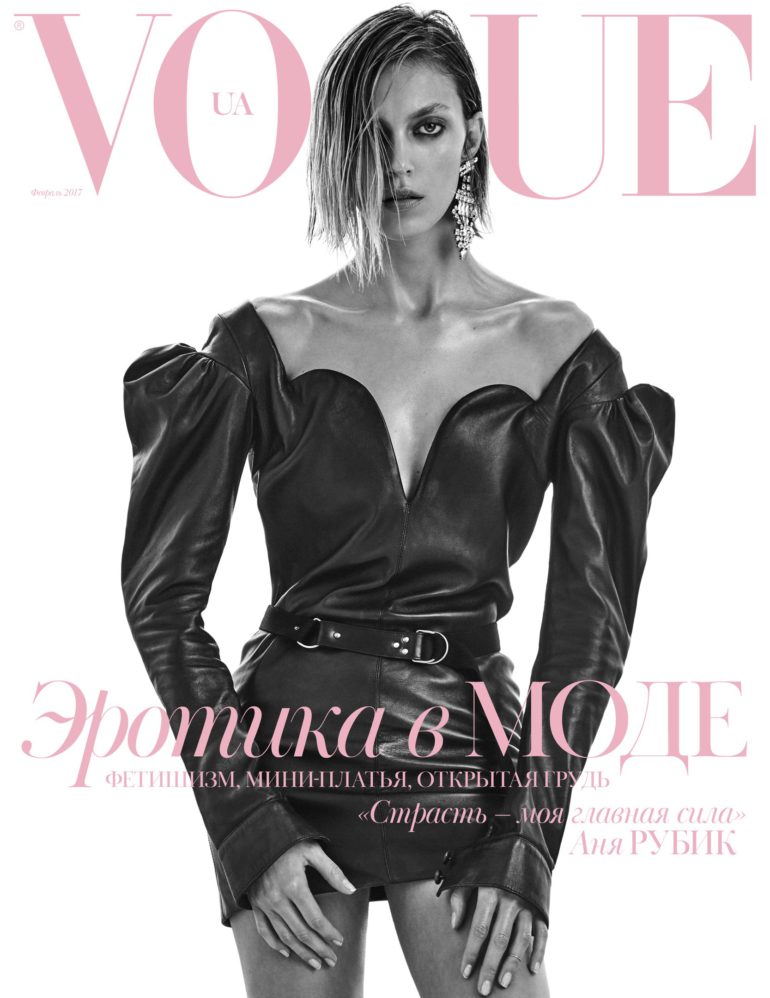 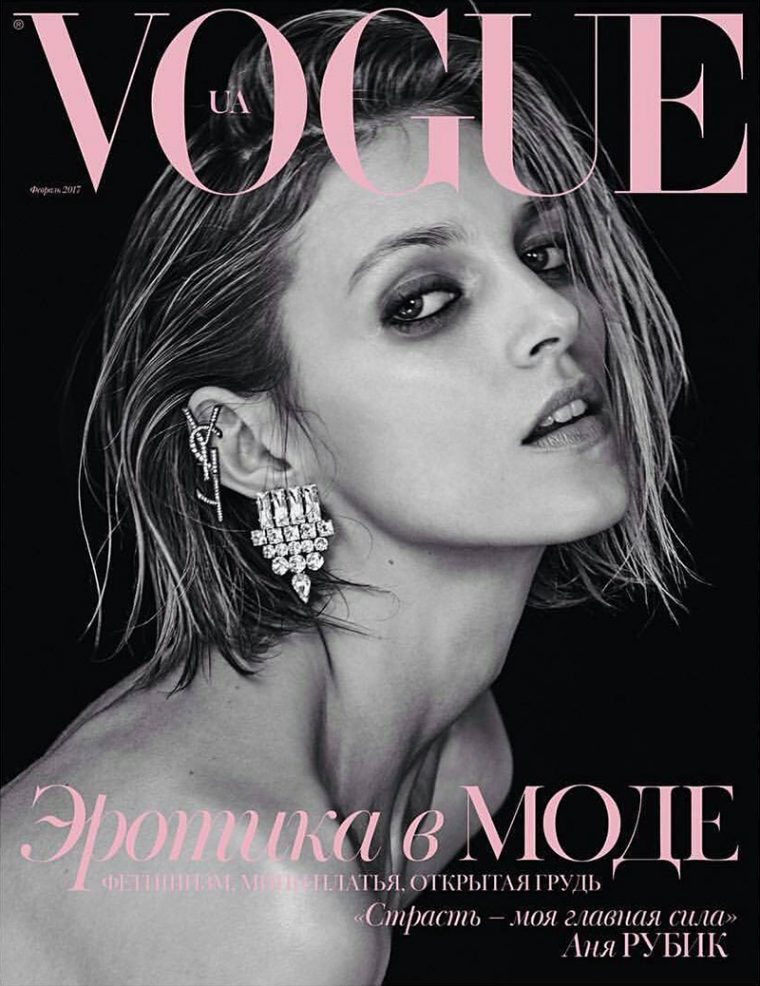