Guinevere van Seenus & Coco Rocha lead the way, proving sometimes life requires that we go astray in “The Polaroid Issue” Part III, Steven Klein for Vogue Italia, 02/17. The third story in this compelling quartet comes out strong, as art involves us in a kind of swaray of the senses. Secrets show in the dark, as the cameras catch them consorting undercover. The lithely frame of Erin O’Connor is covered up, showing a side of her visceral intensity. Like an avant-garde Buddhist kneeling in fashionable form, she does what she does best, by drawing us in with her quiet intensity. Never a model that fed on the frenzy, she seems a force of the formidable. Reeling from her untenable power, she sits in quiet wonder as we watch with bated breath. An exquisite mix of passive and power, she moves not a muscle yet she’s speaks is silent form. This is one of the most satisfying images I’ve experienced within an editorial set. To witness Erin’s strength surging through her body, is of itself, as thing to behold. Patti Wilson garbs her in a dark overcoat, falling over her head like a nun’s habit.

The art of the 80’s erupts. As Rachel Williams, a model who once dominated the page, heats things up in a righteous rage. Holding her long leg in full extension, she weaves her fingers together, cradling her spiked heel in seductive form. The elegant shapes of her skin lay out like a piece of living art. As her body speaks in poetic passages… with balletic movements portraying the tattoo line marking up her left arm. Like a moment from the film, Flash Dance, done with a more intense effect. Patti Wilson compliments the leather dress, with back seams climbing up her sheer, black nylons. The simplicity of a single chair can speak with immense intensity. As we watch this fearsome female strike a sexually suggestive pose, while her seated portrayal gives off a sense of self-awareness. The curves of Ashley Graham’s body are only matched by the exquisite form of her face. Her lion eyes catch the light with shine that makes her skin alive, as rich, red lips reflect her riotous nature. Like a painting come to life, Klein captures the sweeping lines of her voluptuous frame. Both of Ashley’s shots are caught in stunning profile, as Sammy Mourabit highlights the ferocity of her fierce features.

Breaking in a new era of mosiac beauty, Mourabit’s makeup is a masterpiece. Crystal Renn continues her morphing ways as she literally transforms before our eyes. Welcome to the neo-millennium. Time without a place and a place without time. Revolting against the norm, this eccentric kind of technique centers on the idea of radical change. The forcible overthrow of common cosmetics has made way for the epoch of the avant-garde. A golden hue covers the brows giving the illusion of absence. While shine surrounds her tanned skin, leaving nothing behind her but a gorgeous glow. Subtlety speaks volumes, as her face is touched with a tint of Crystal, leaving her eyes-wings to fly high. Red lips seize on the opportunity to sizzle… as drama is left for the mouth. The wall takes shape as the sensual lines of her body are captured in stunning silhouette. Her standing portrayal gives a sense of strength, as Ward wields his magic wand we watch this fearsome female strike a sexually suggestive pose.

Guinevere van Seenus kisses (stuffed) snow tiger, smearing red lipstick over white fur. Playing with a series of stuffed animals, Seenus steals the show. Committed to each scene, we watch her go from riding a playful pony to slow dancing with a spotted leopard. The thrill isn’t in watching her dance with plushies, it’s in witnessing her truly transform. Wilson changes things up by selecting a series of styles that morph into the scene. She rides in pride a white pony wearing a graphic pattern, to stunning us senseless in black silk. We blink our eyes and in a sheer surprise, we witness the fair Guinevere donning a different dew. Ward delivers high-end haute hair with coiffure that captures our imagination. The face paint resembles the eras obsession with white powder, as a tawny touch gives the eyes a futuristic edge. This cosmetic collective comes forth, with no brows or shadow & flaming red lips. These grand looks brings us back to the aristocracy of the late 1800’s, with big-blonde-wigs that resemble a nest. High hair never looked so brilliant ~ as Backcombing delivers the Bump of the Day.

Coco is all over the board baring out her gift for being gregarious. Wielding her wonder, Rocha wears a red dress surrounded by a wall of the same shade. Then, as if the color has all been drained, she shows up on her back in black/white. Wearing precious adornments and lustrous accouterments, the juxtaposition couldn’t be any greater, as she’s fully dressed in all white 40’s inspired garb. She dons a flowered Cloche and fabulous fur. She’s ready for her close up – gleefully posing while taking a selfie. These pictures play with limits pushing the idea of the Selfie Nation. Succumbing to the madness of her own self obsession, Coco falls off the bench lying on the floor as if she can’t take another tweet. 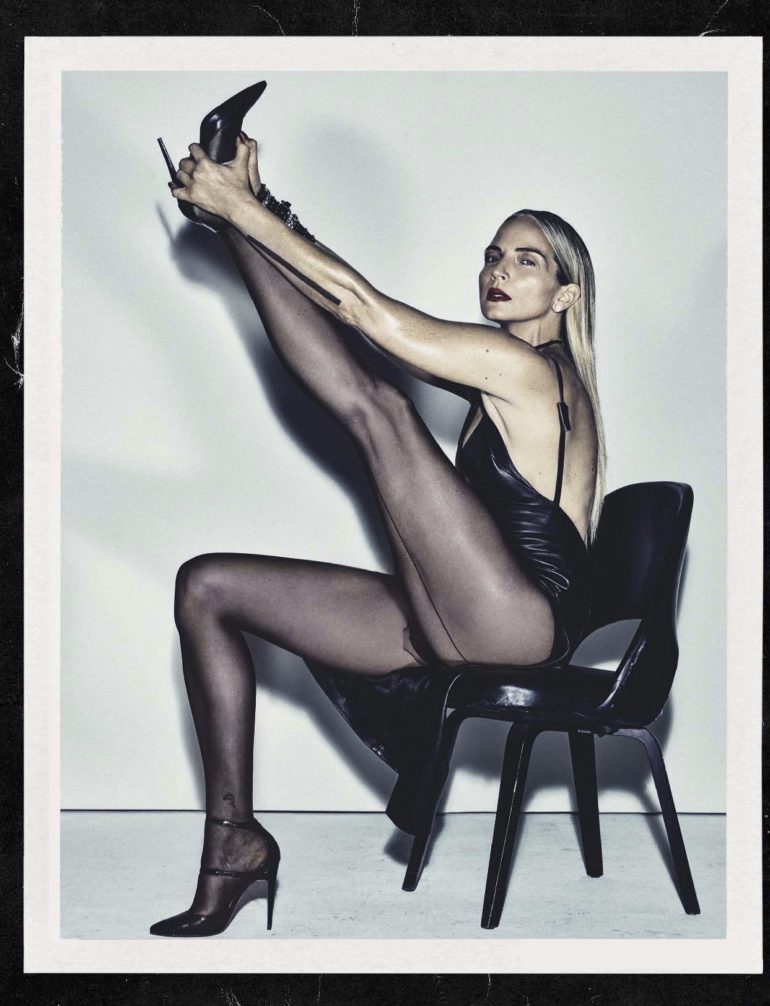 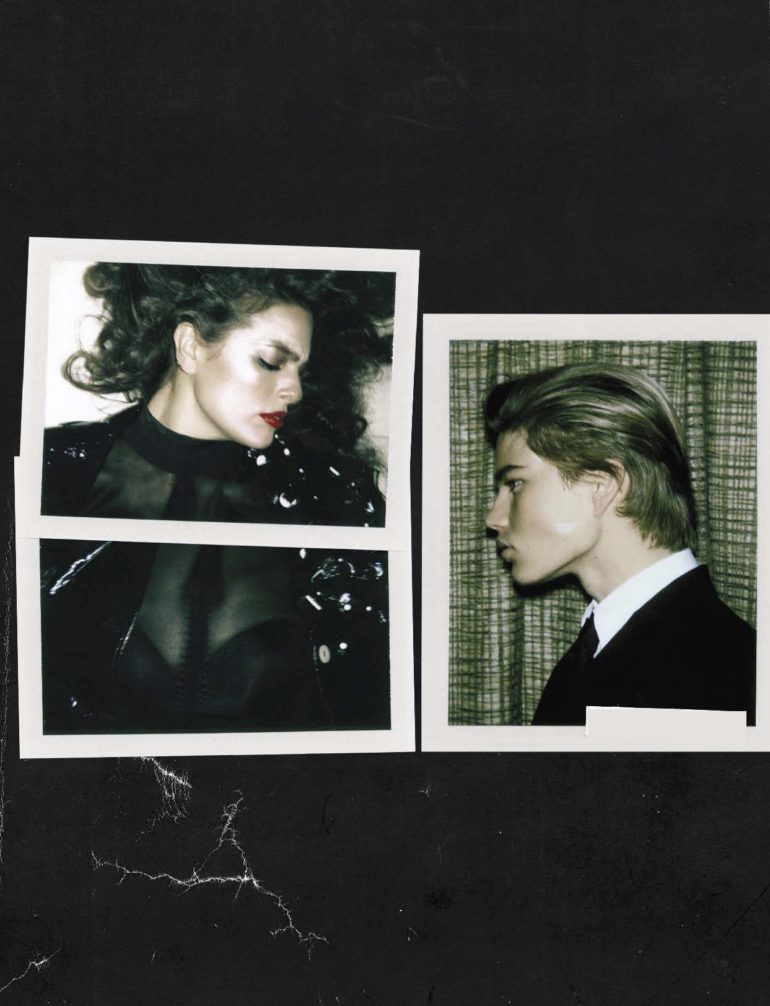 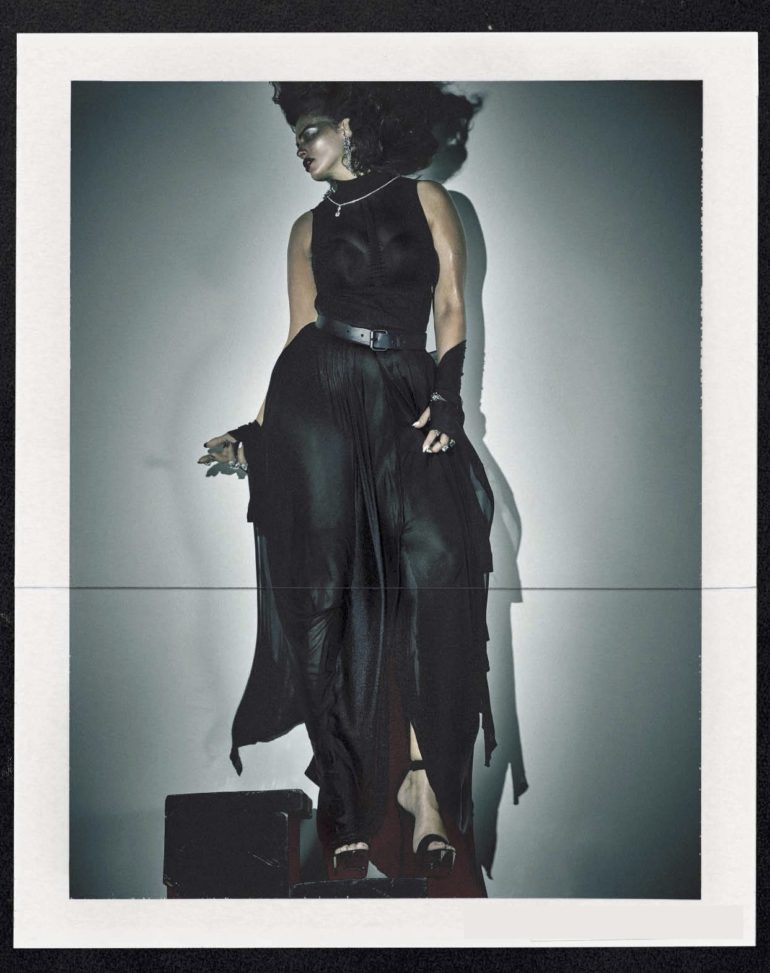 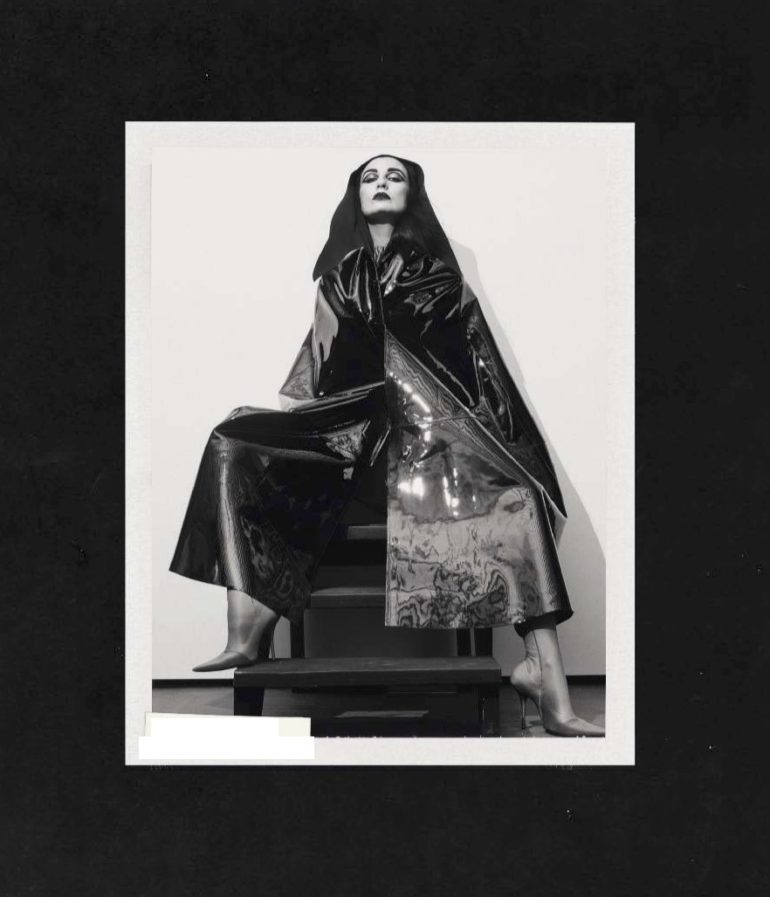 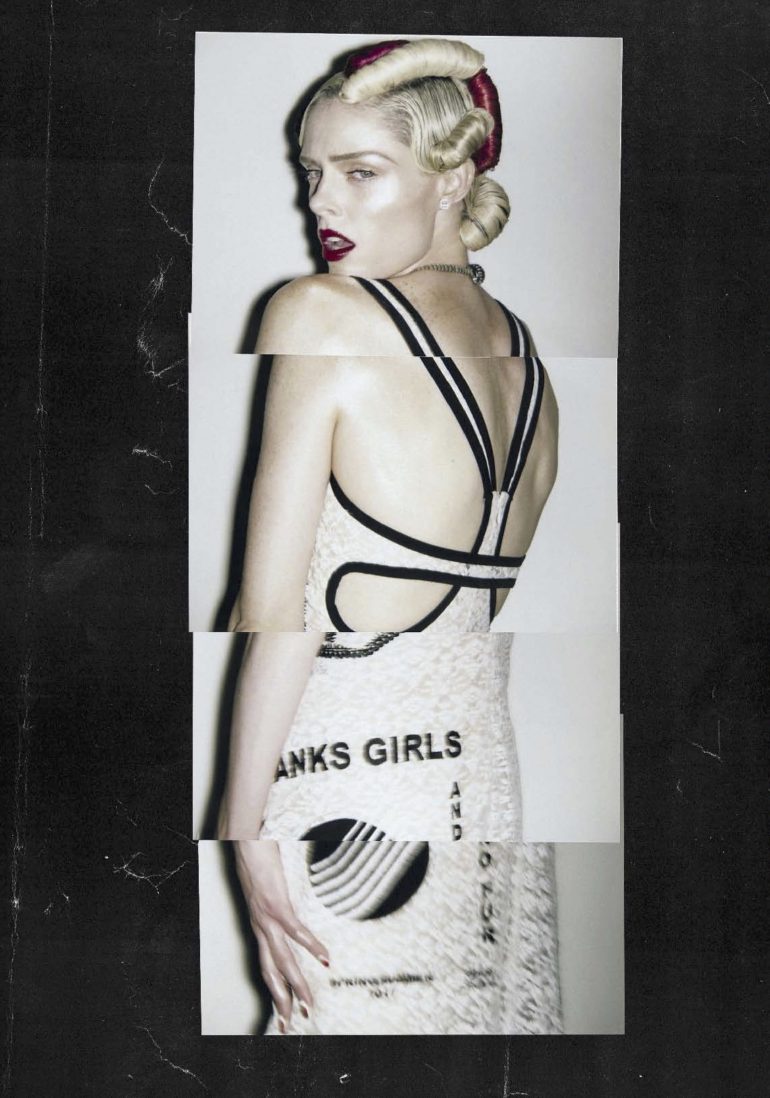 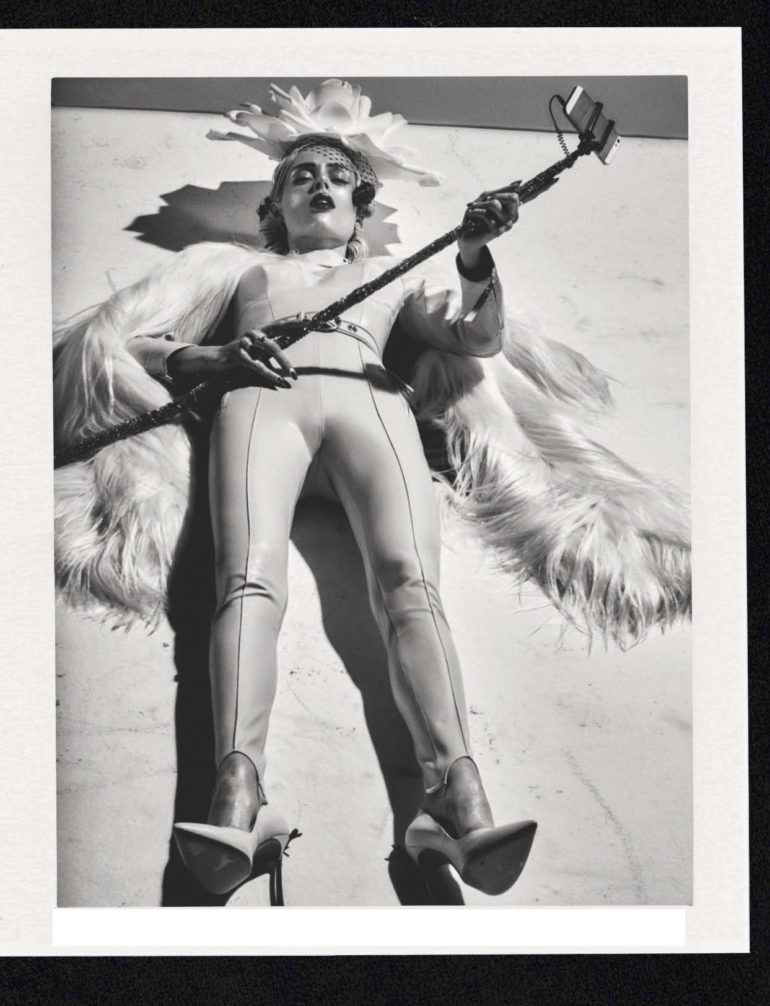 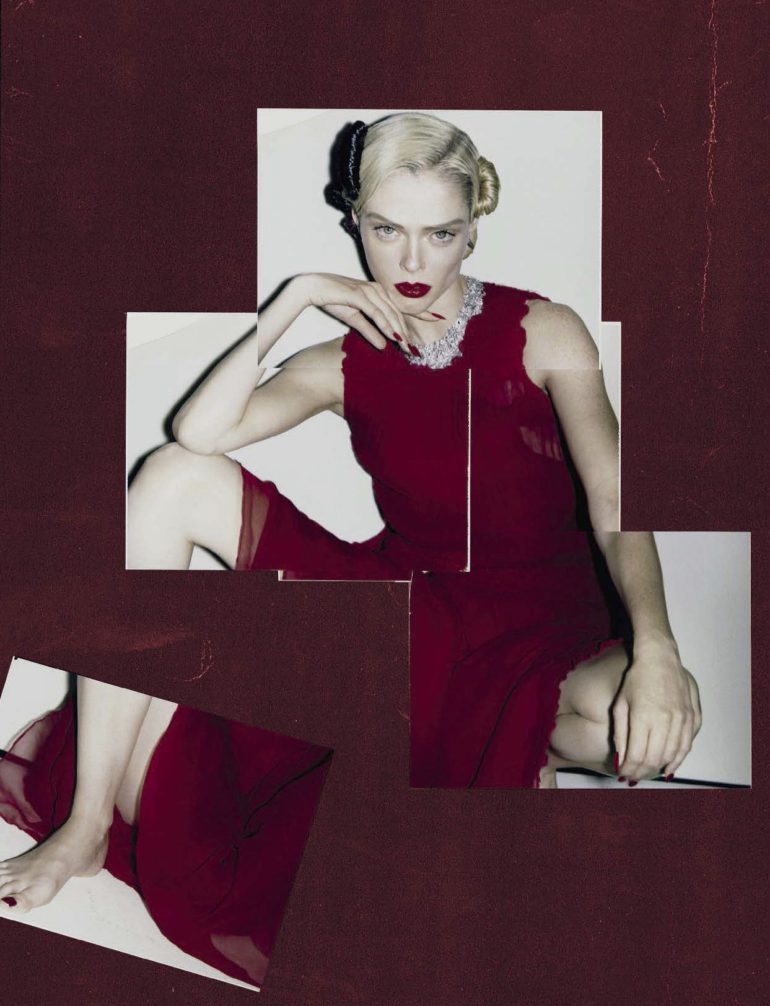 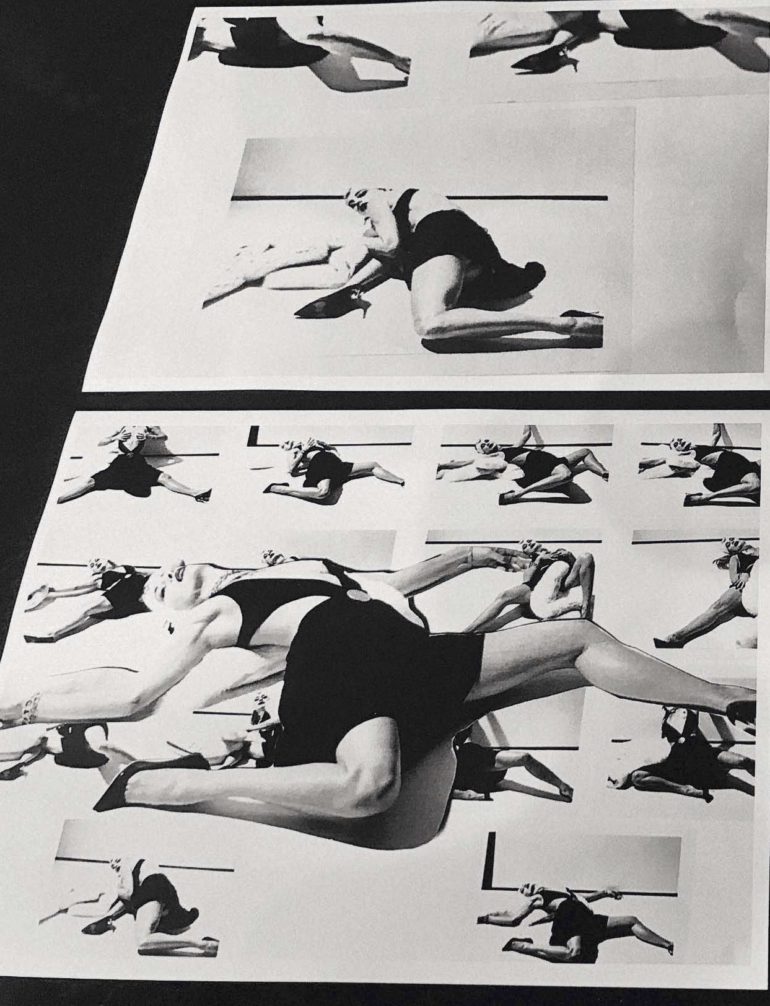 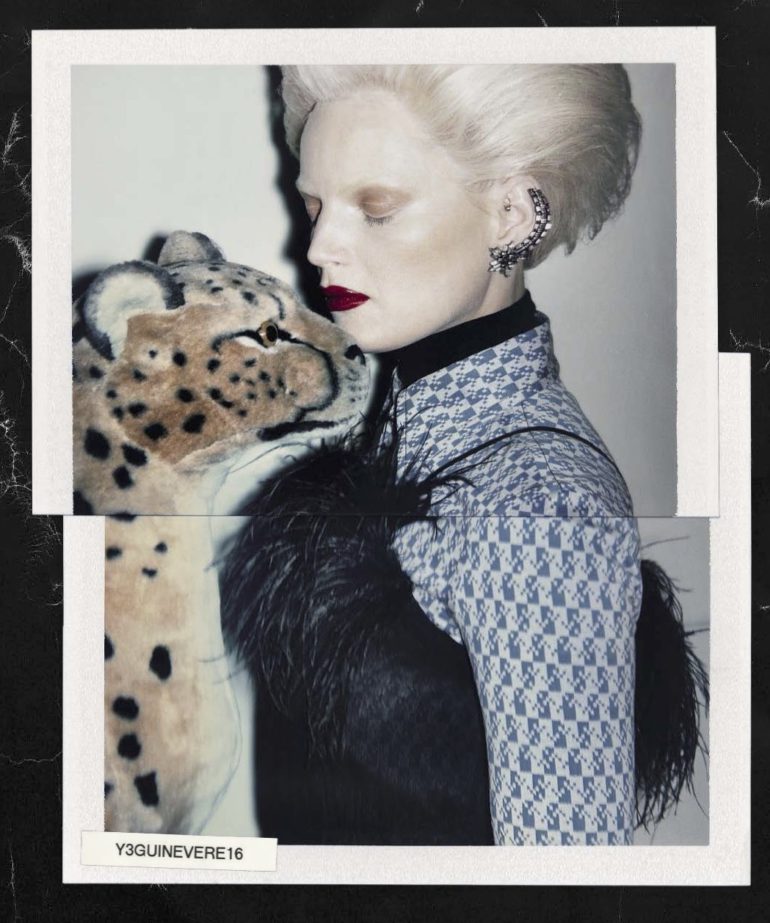 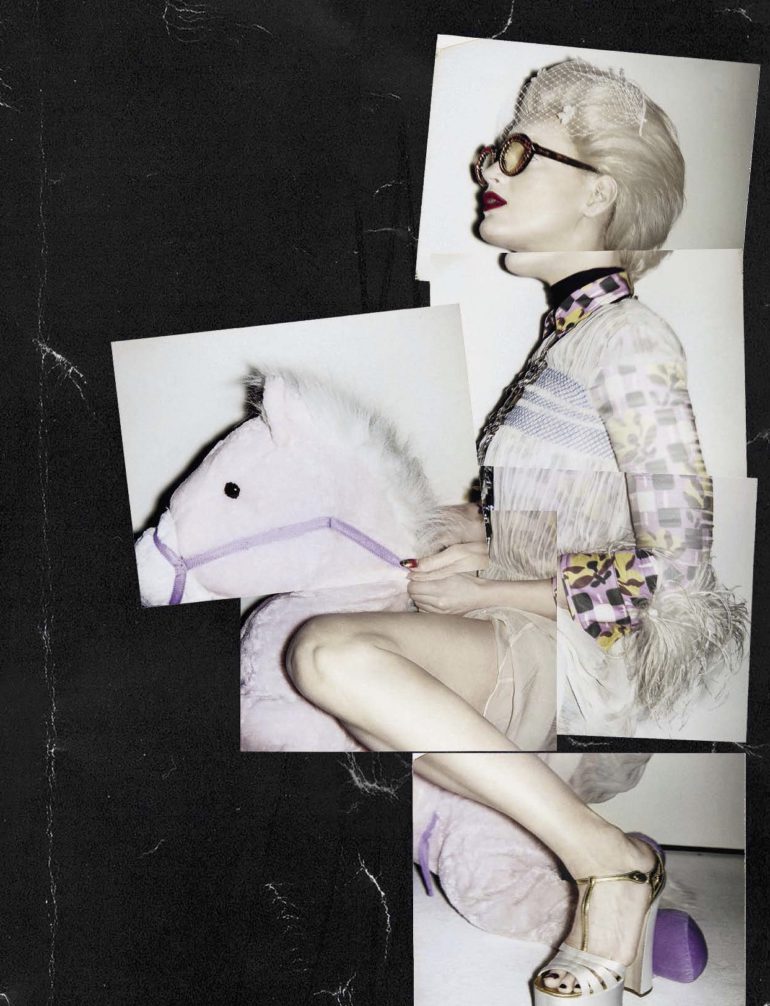 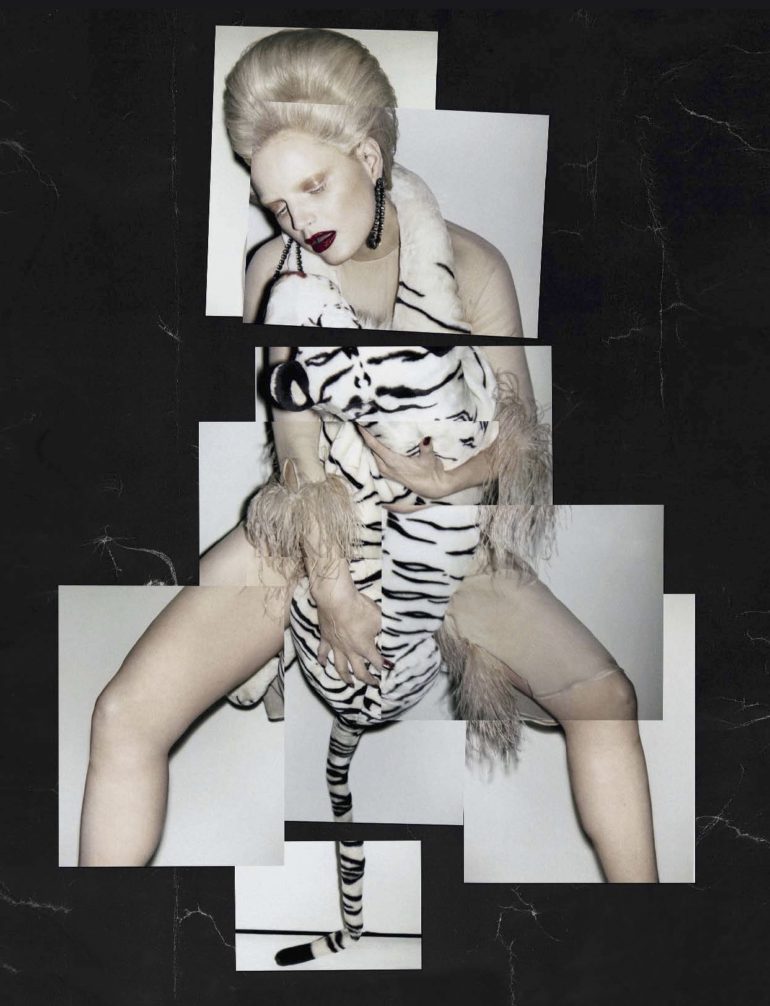 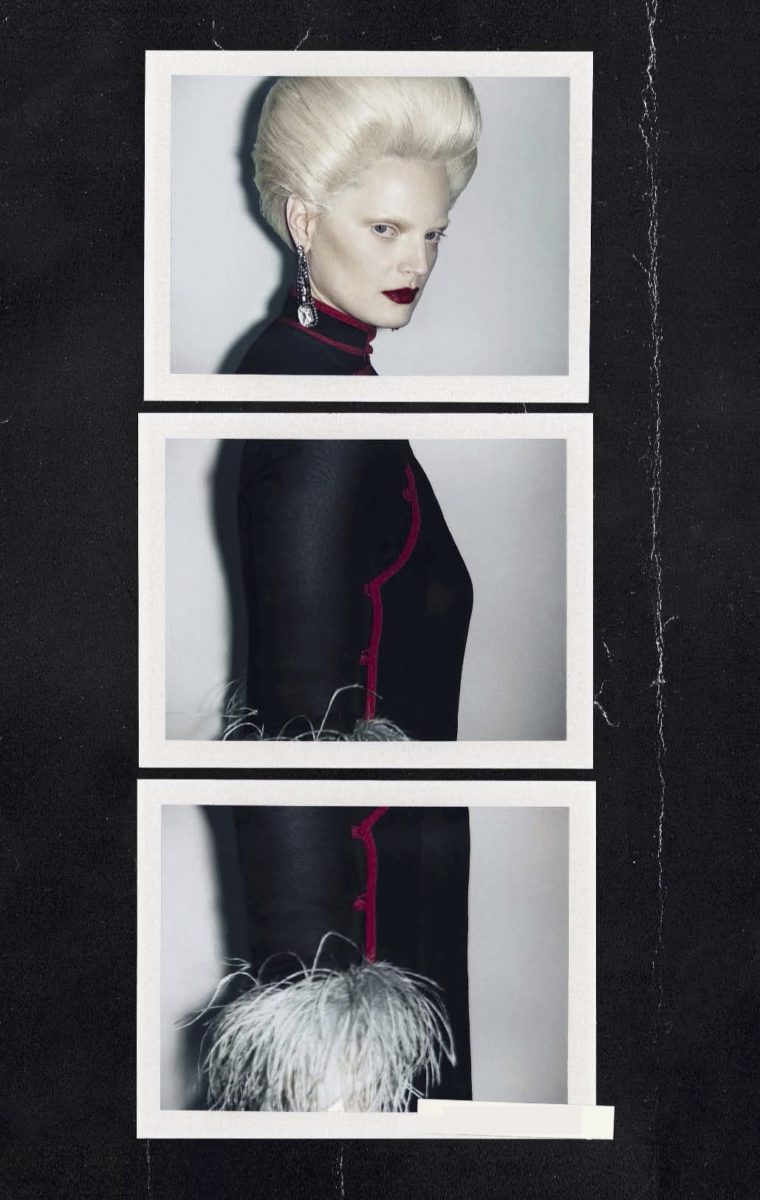 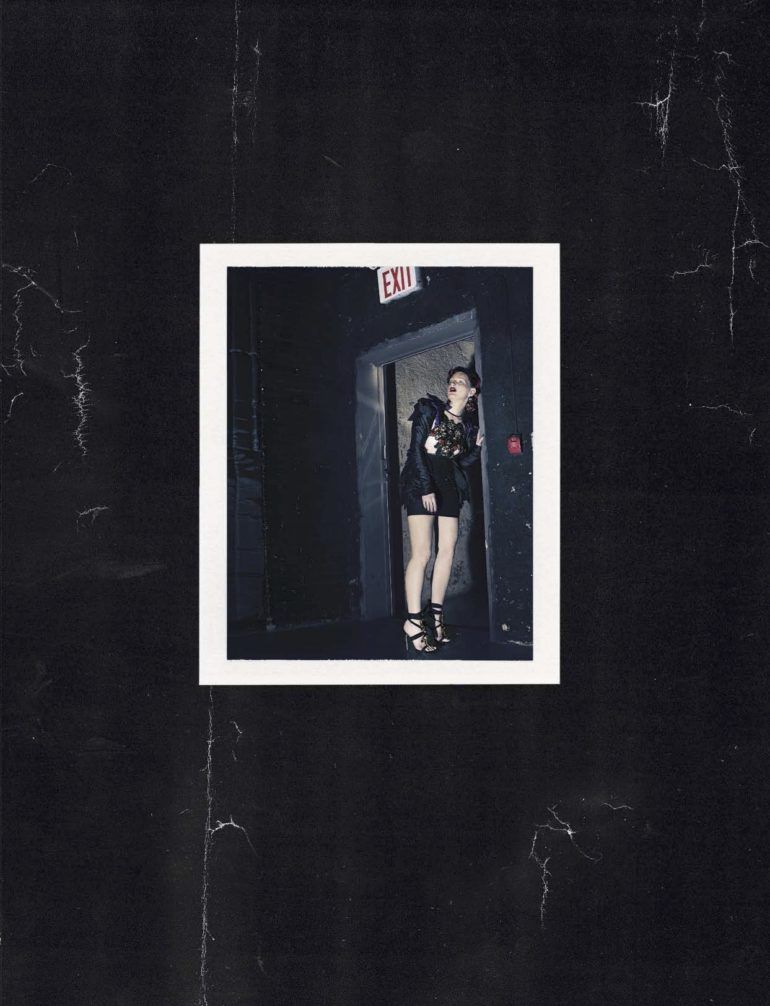 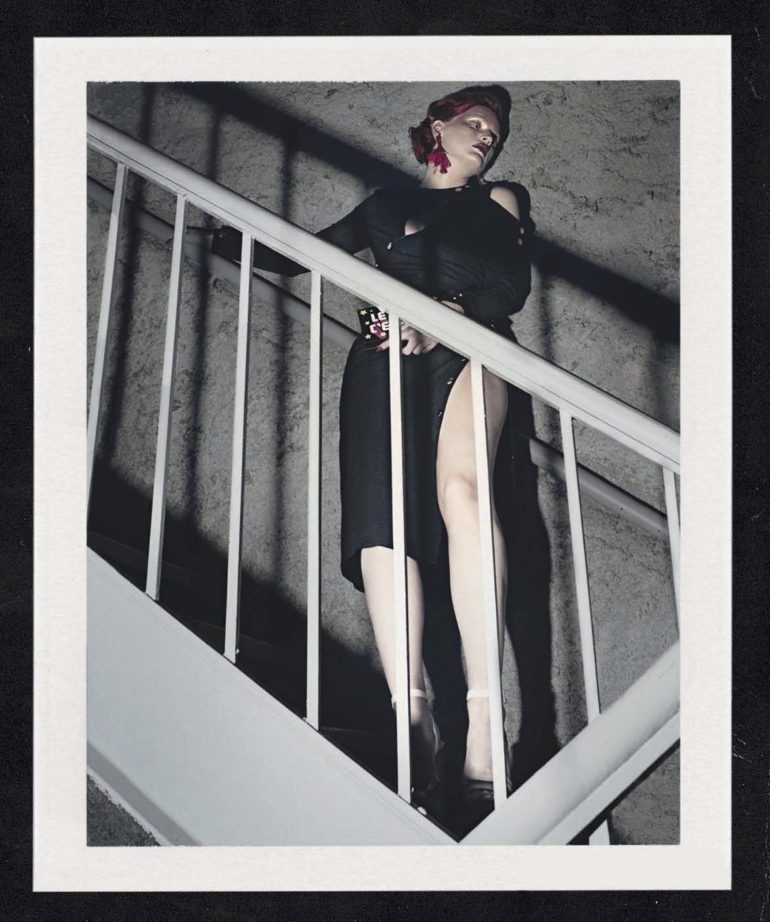 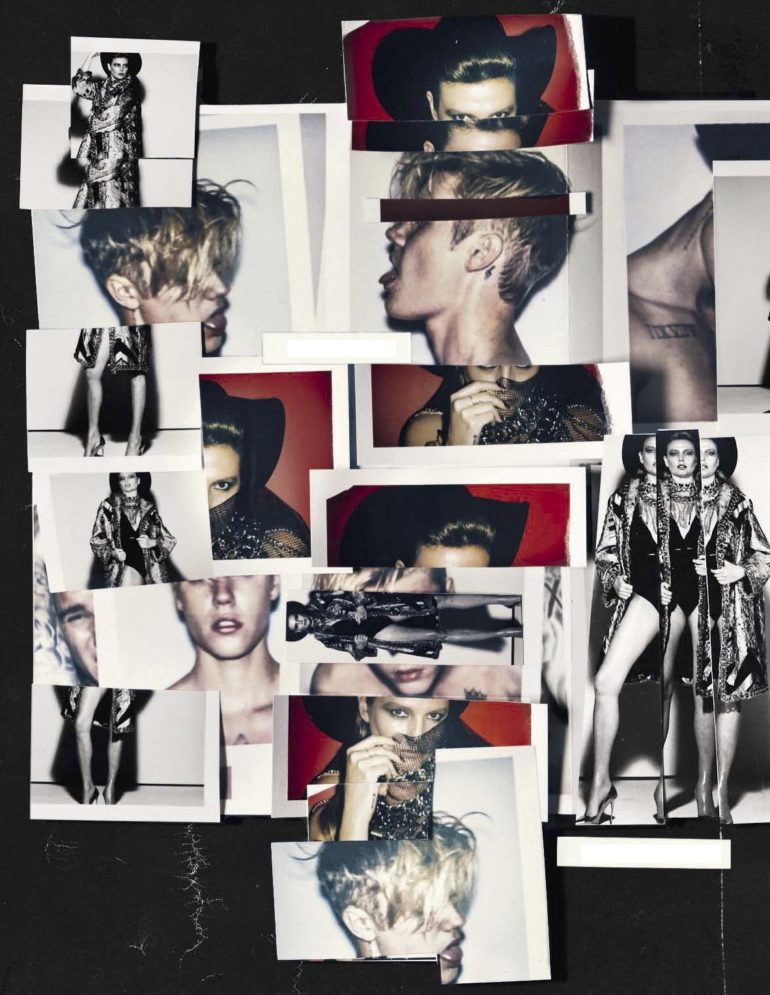 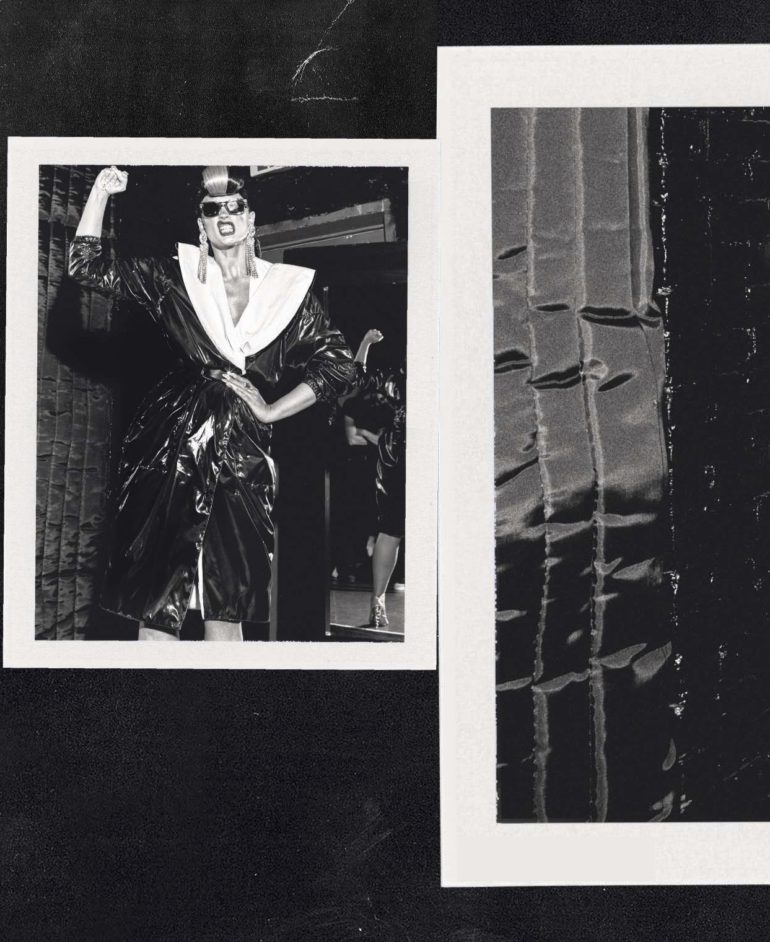 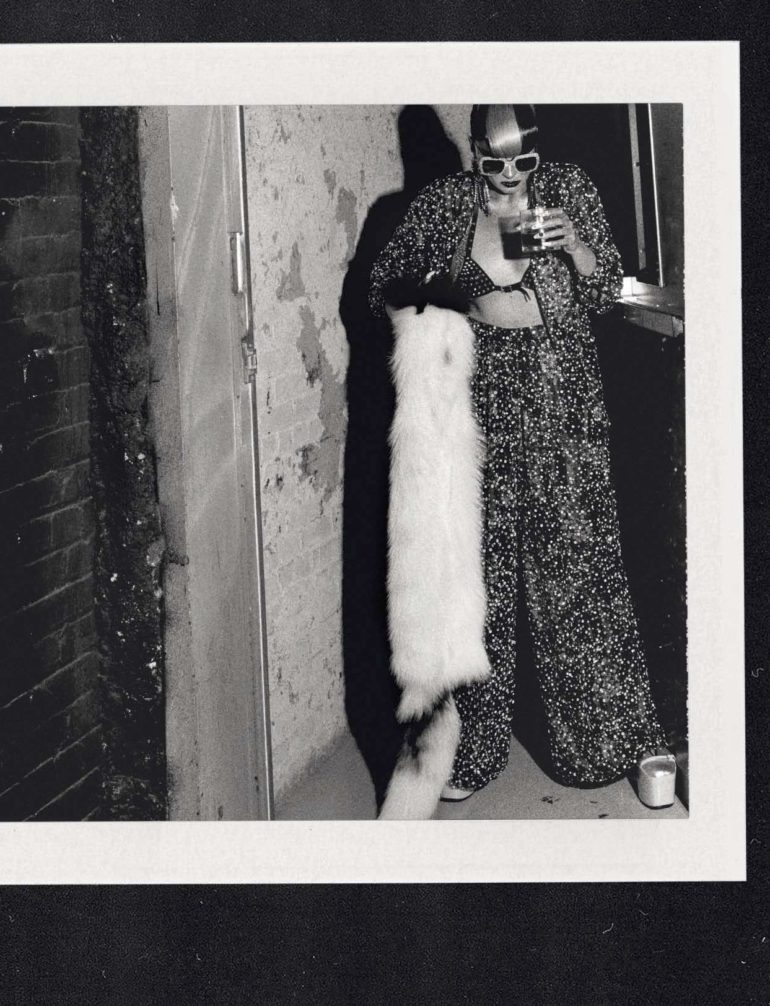 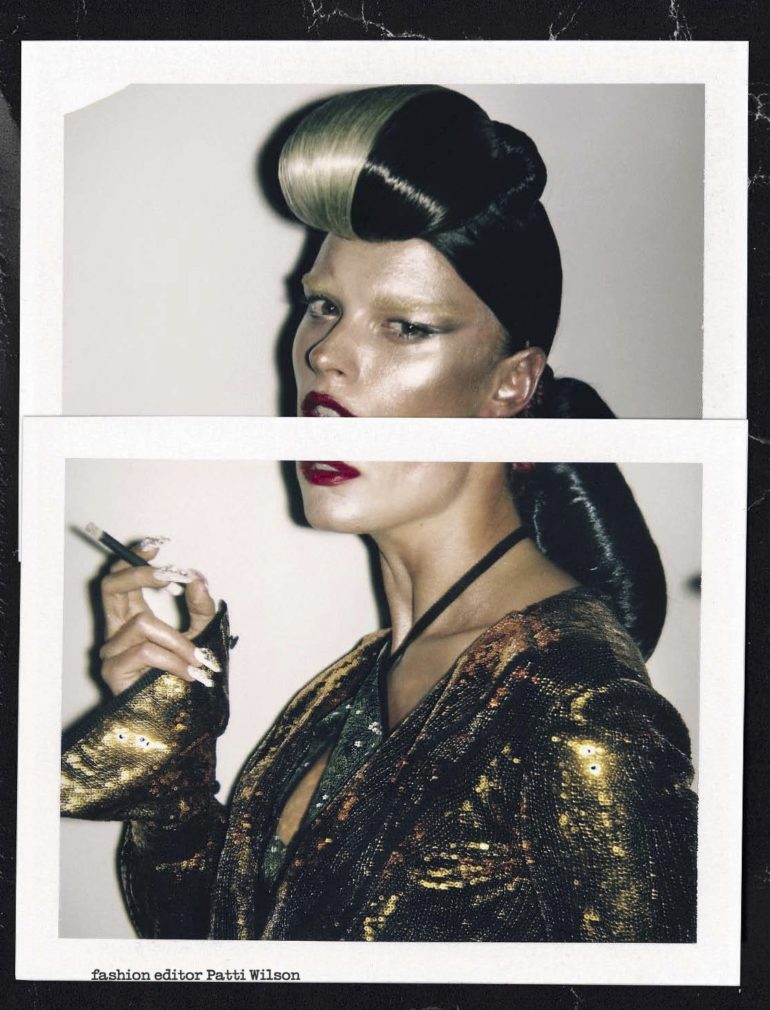 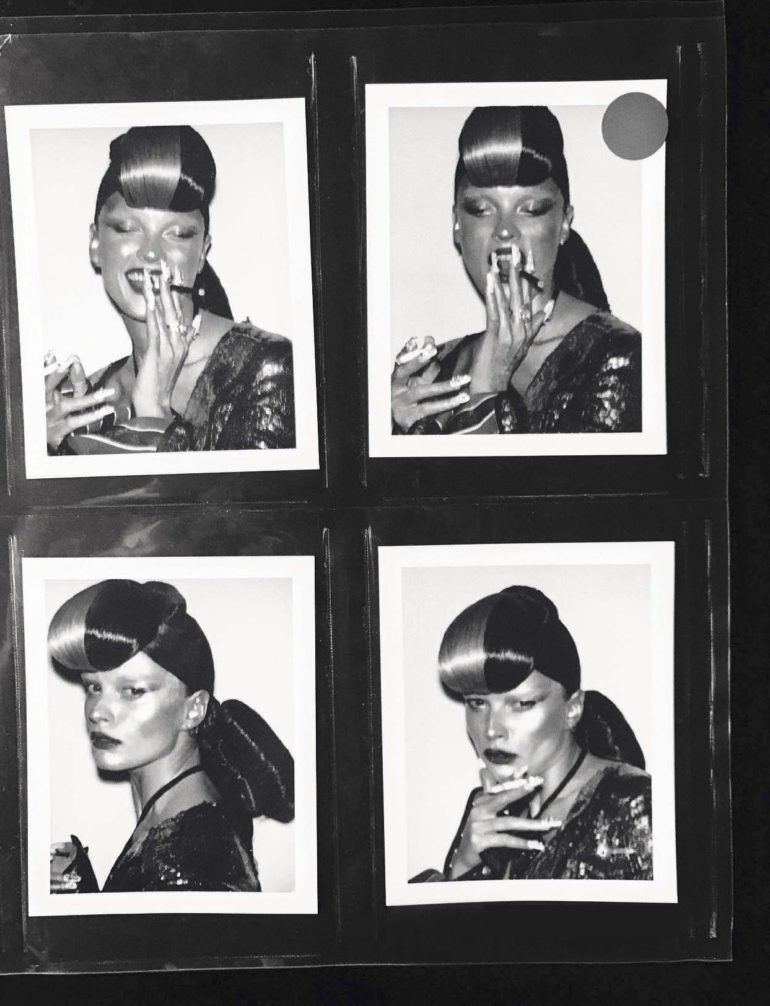 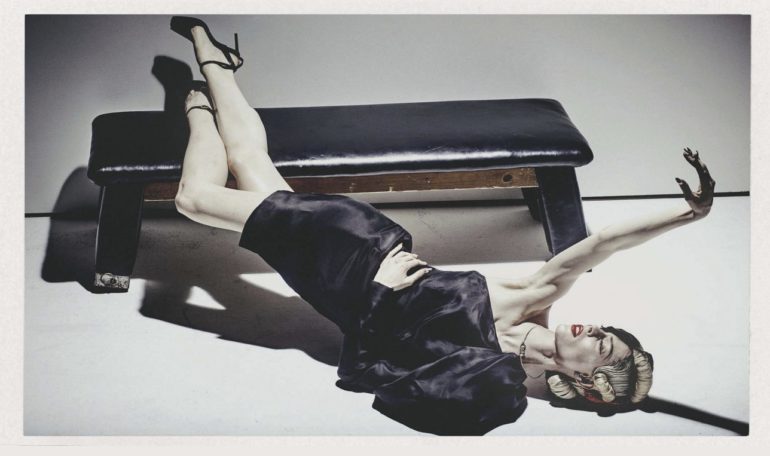 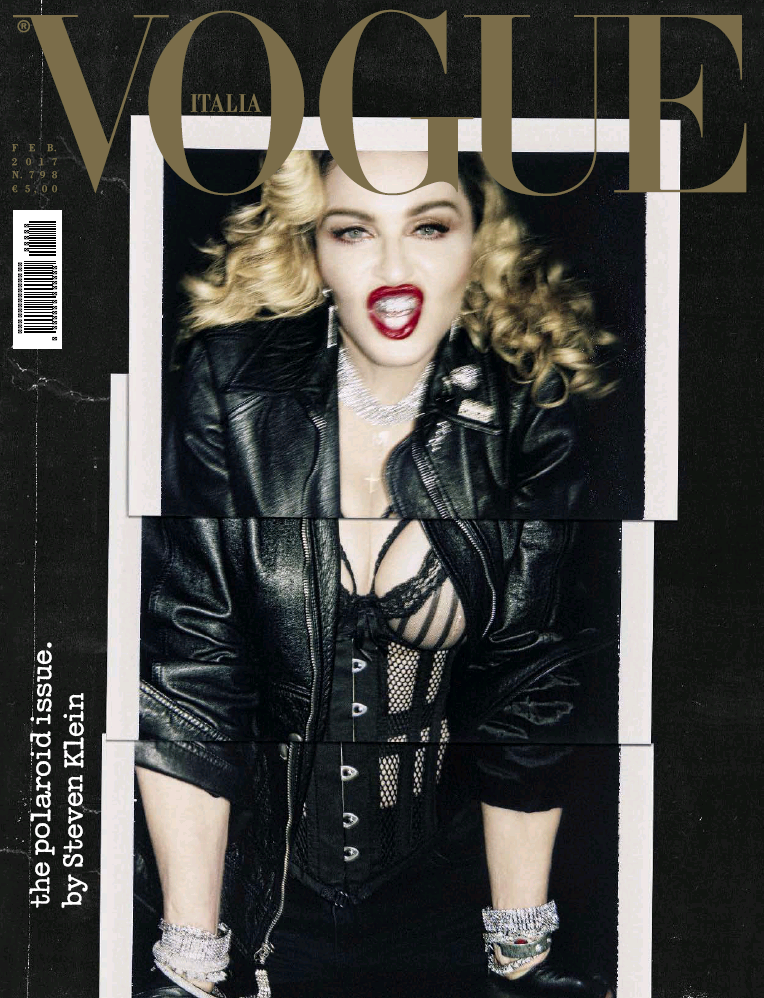