Madonna opens the show for a story set to go in Part II of “The Polaroid Issue” by Steven Klein shot for Vogue Italia, 02/17. Something kinky comes our way, as this four person game is set to play. The art of fantasy fuels the fire as Klein shocks us into submission. Darkness brings life to the night, as it invites us to explore the other side of light. Guinevere van Seenus, Hannelore Knuts, Natasa Vojnovic & Anna Ewers merge into one as they travel inside pleasure’s palace. This is a tale that consumes the sanctity of pleasure as it excites the art of excess. An orgy erupts, as they gorge on the gorgeous, with the singular intention of stimulating the senses. Like moving pictures this story unfolds in fluid form, as Arianne Phillips embraces the theme by creating a collection of couture that is definitely haute. Styles are set like liquid and firm like gold, as each outfit pours over the body luring black silk to savor every inch of the skin. Dark designs ensure the thrill is not gone with pops of scarlet that let the sizzle shine on. These ballsy brawds aren’t afraid to get their hands a little dirty. Proving… It’s not always the flame that dictates the rules of the game, sometimes it’s the sultry heat you’ll have to beat.

Secrecy and obscurity are the themes, artfully expressed in a kind of whodunit style. The fast-paced fusion of art and fashion come to the page, leaving dark, silky styles in an eruptive rage. All the worlds a stage and we are merely players. Words to live by. We may benefit from the vast beauty that these shots bestow, but, we are swept up in the savviness of each scene. Leopard skin growls its way into gorgeous while silk slithers into seduction. See-thru fabrics give a glimpse of what’s hidden beneath, as high fashion is caught in a spinning whirlwind of sexual exploration. Traveling to the epicenter of excitement, the heart races as the spirit soars. Hannelore flies over the front of a speeding car, riding it like one would catch a wave. Balletic in their movements, each picture plays off the other, while there seems to be an ever-flowing element of emphasis. Riding high, drama is met as Knuts pushes Ewers against the side of a car, leaving no question who’s in charge. Vigorous, dramatic, chaotic & real, the pawing hands represent an insatiable appetite for the spotlight. Feeling like we’re spinning out of control, we travel to the center of sanity where we find we’ve gone too far. In one of the most dramatic depictions of the editorial, we witness a woman hanging off the bumper as hands reach out over the backseat. The power of “The Polaroid Issue” continues, as this is Part II of this decadent display.

Seduction envelopes the scene as Sammy Mourabit elevates this story to full body coverage. Forward is the direction and fast is the speed. Brows be gone, as nude illusion gives the eyes a new view. We’ve entered into an era of makeup that will leave some of you reeling. But, I will say from an artistic standpoint this is long overdue. Shine is not left behind as this brings the skin to another level. Beyond the normal, this is what I call the Uber-Glow. All things start with the circle of light surrounding the eyes. Evocative and moody touched with a hint of liner, the lashes are empty as the lids give off an enticing glow. A white light ignites the eyes, climbing over the forehead and falling down around the cheeks. As the succulent addition settles in, touching every inch of the body. So ~ this isn’t body-glitter we are witnessing, this is skin transformed. Dazzling lights hit in such a way as to evoke a response, as glistening sheen shows that luminosity is the thing. Ravishing red celebrates the color of the night, as embolden beauty breaks free with scarlet in sight. Mourabit uses it as a means by which to escape. Rebel beauty is the standard by which to bare as fearsome females ensure the theme is extreme.

Beauty bites off more than it can chew as “The Polaroid Issue” explores the raw idea of overexposure. Thrown into the limelight we find ourselves seduced. This plays with the mind, by switching things up it turns the watcher into the watched and the follower into the followed. As the hunger and passion by which each scene is built forces us to face the perplexing issue of our time. Is this a picture of where we are headed, or is this a snapshot of where we are at? Standing bare backed with her body facing the camera, the message is clear, behind every person lives the naked truth. Breaking free from the crowd we see Anna walking forward in singular motion. A highly conceptual piece that requires a bit of focus. But, it’s in the memory of the great Franca Sozzani that we embrace this compelling question. 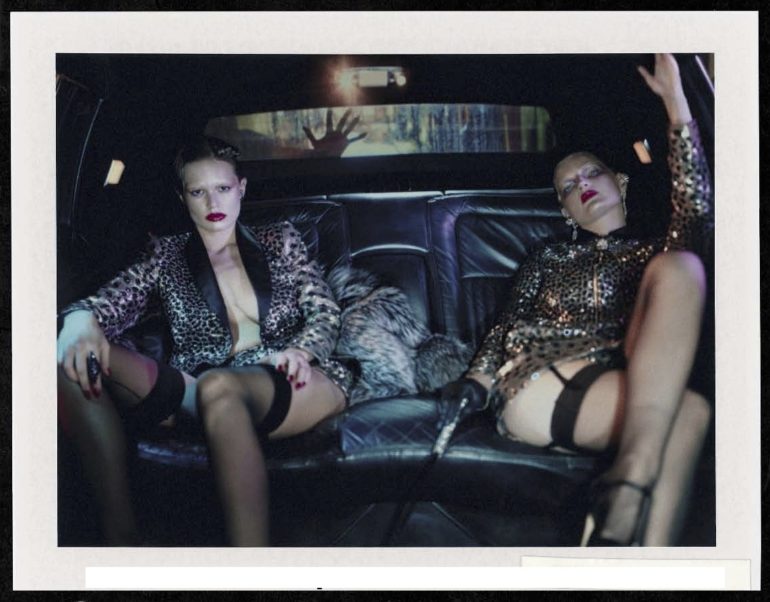 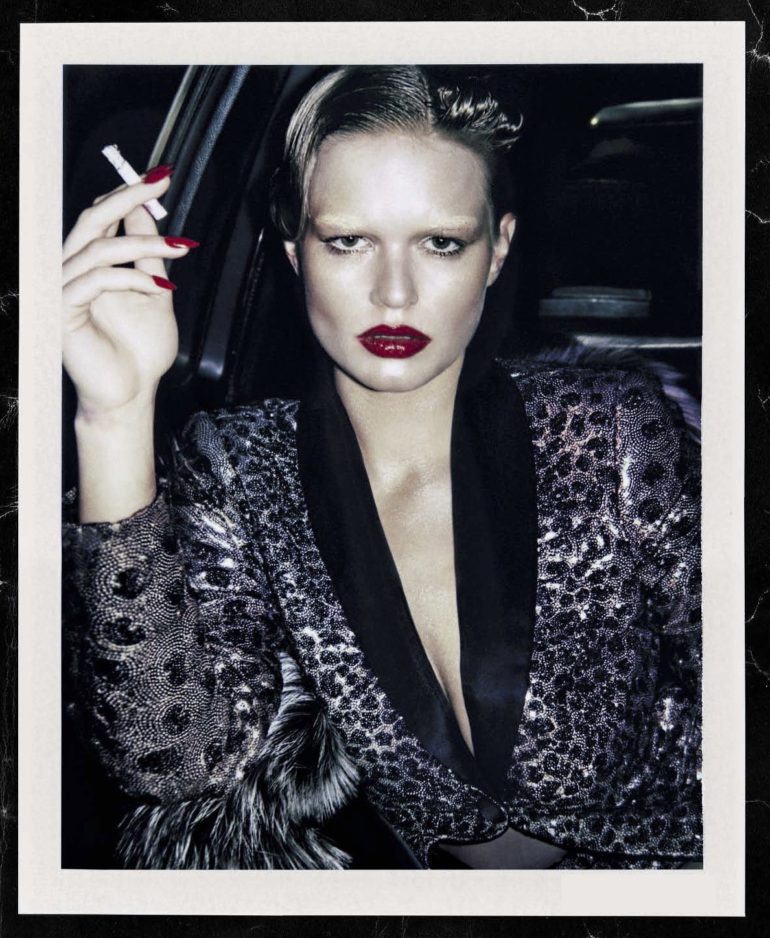 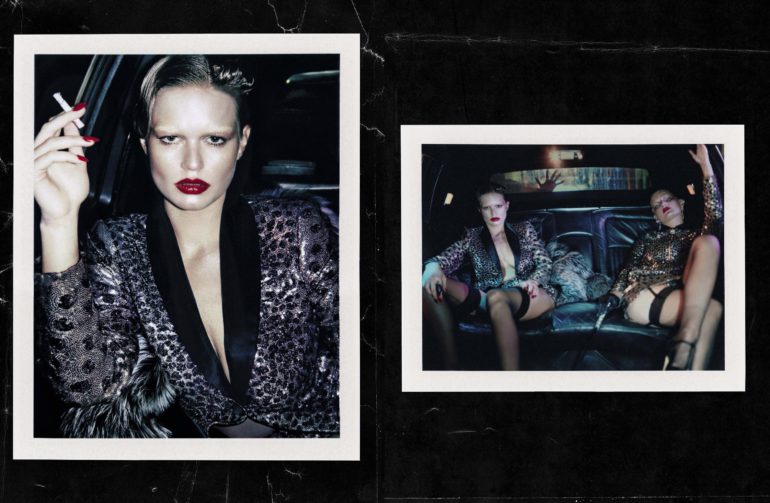 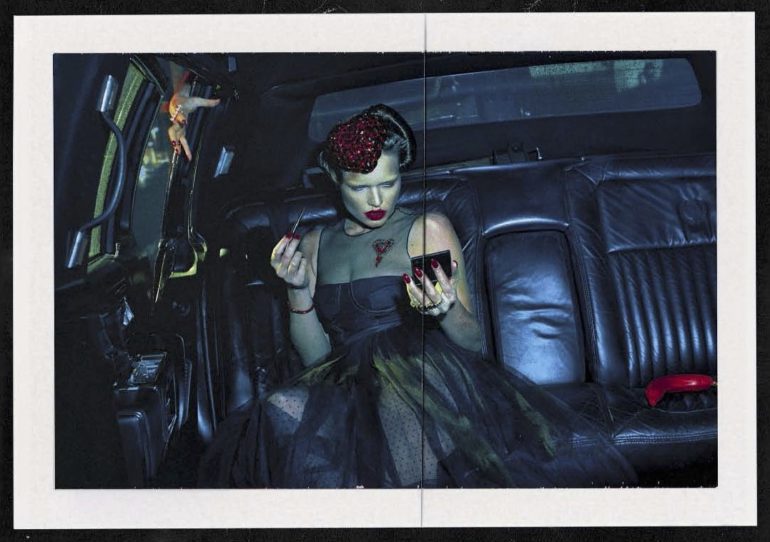 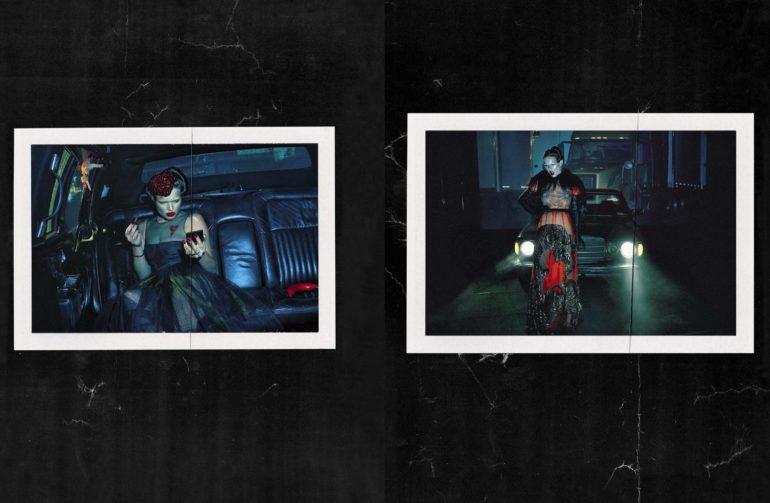 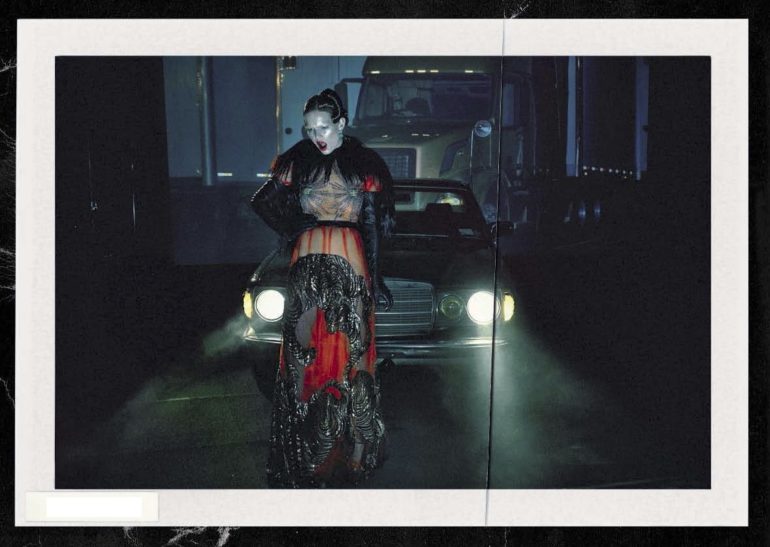 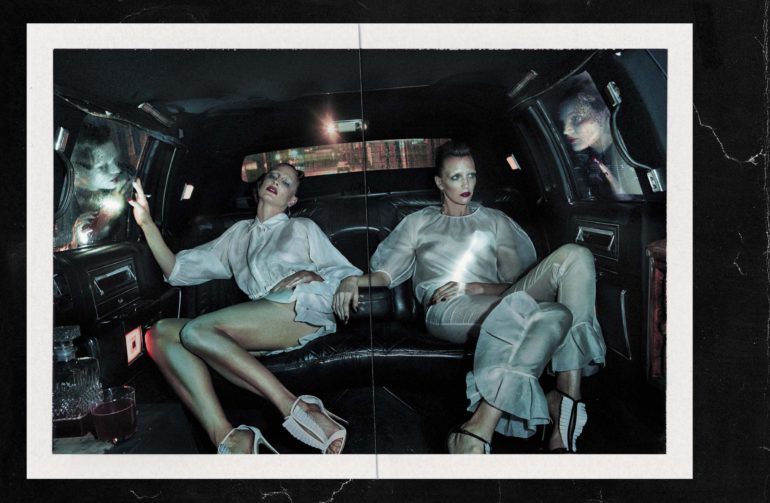 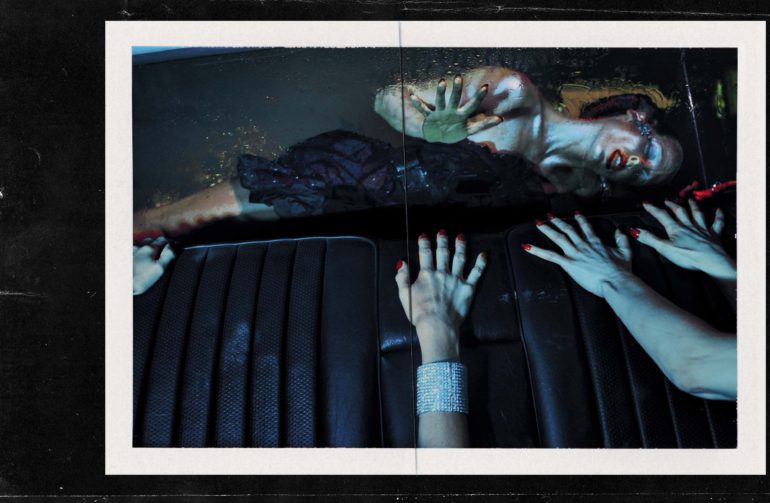 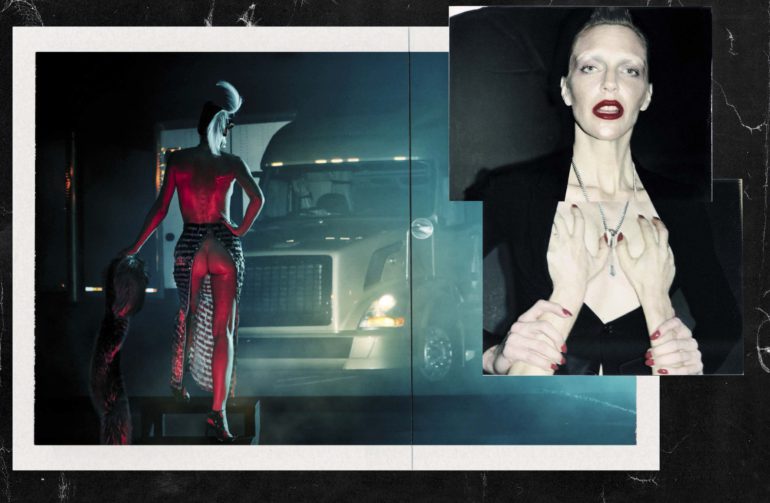 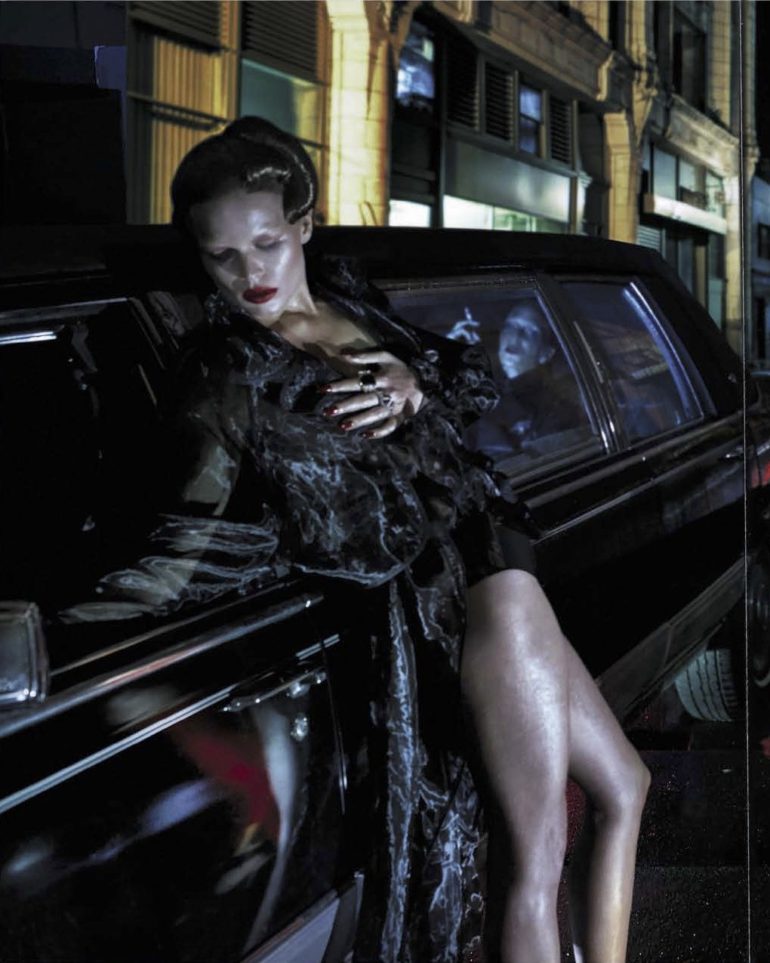 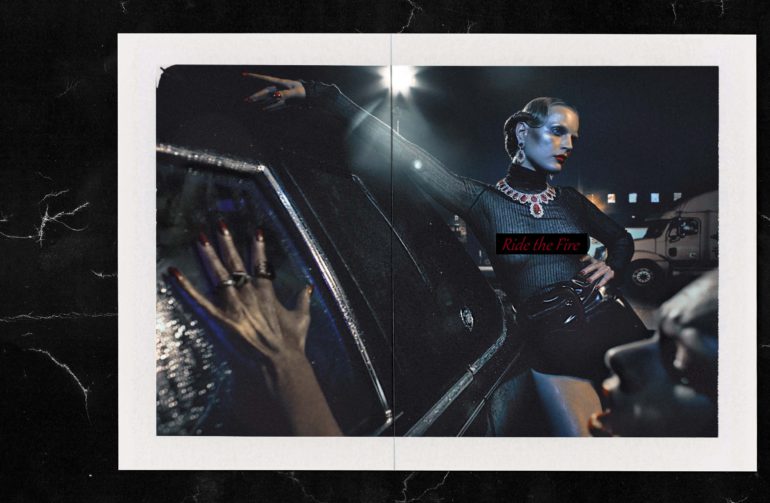 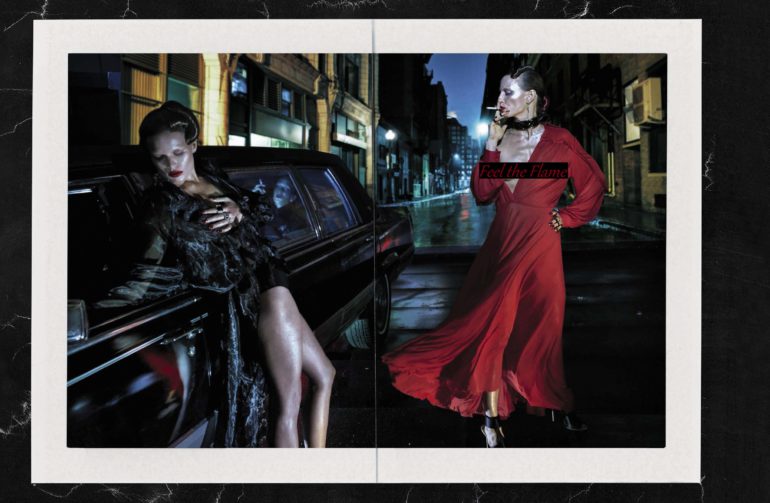 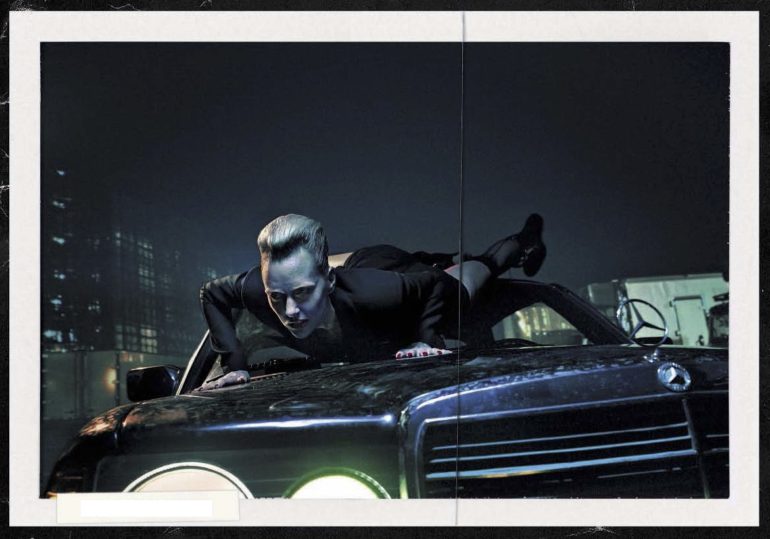 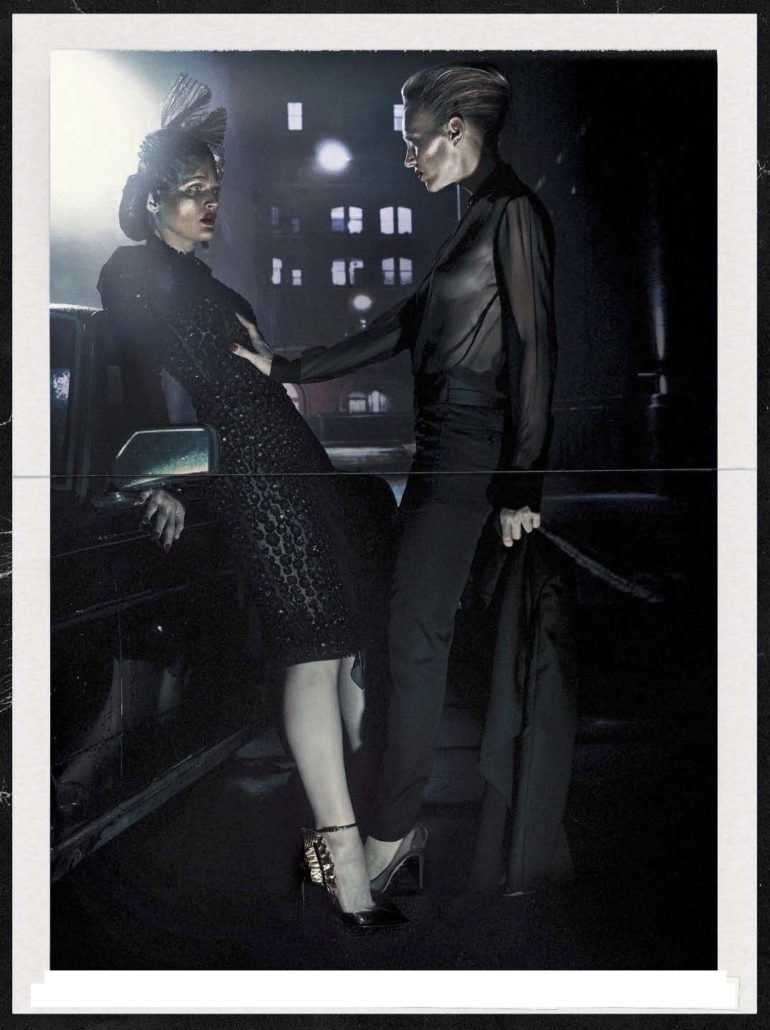 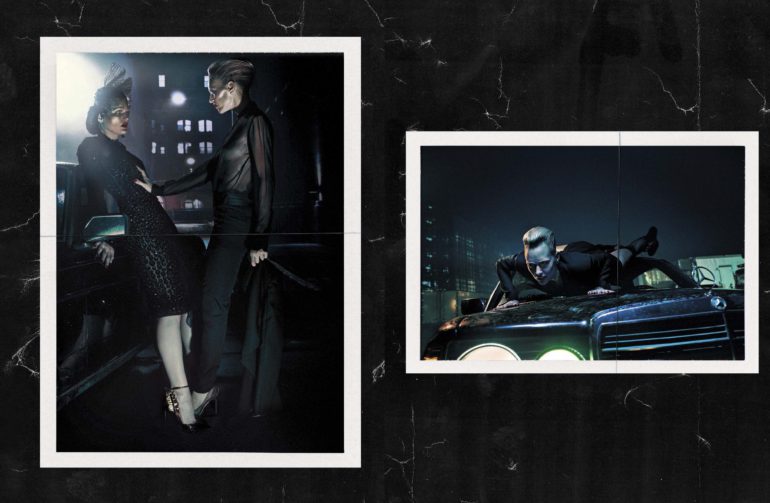 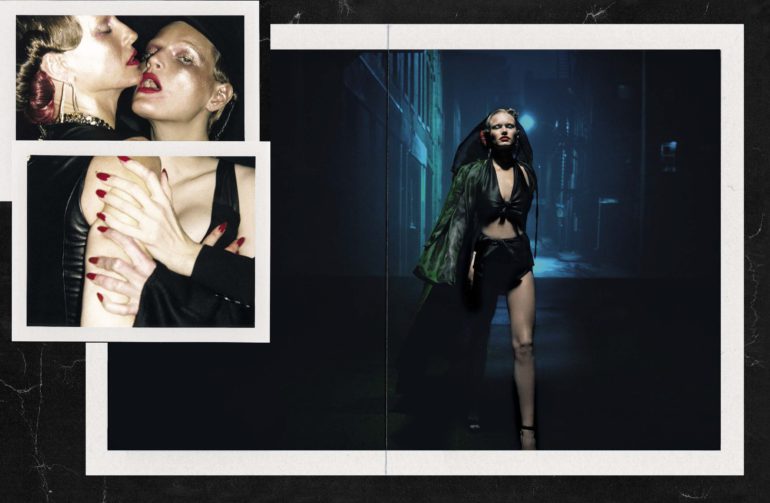 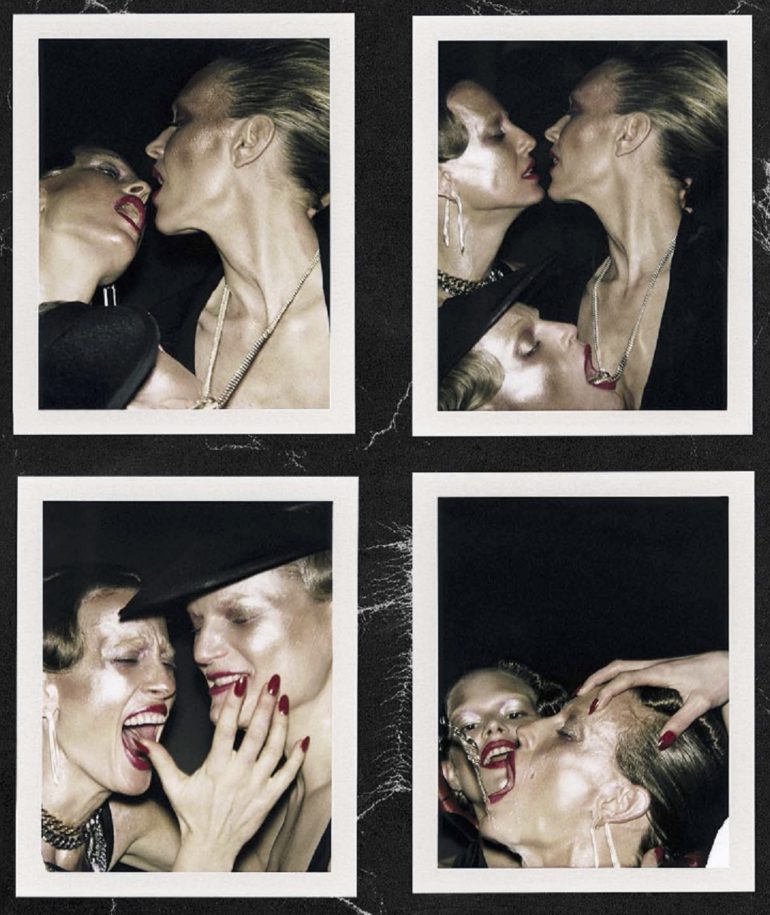 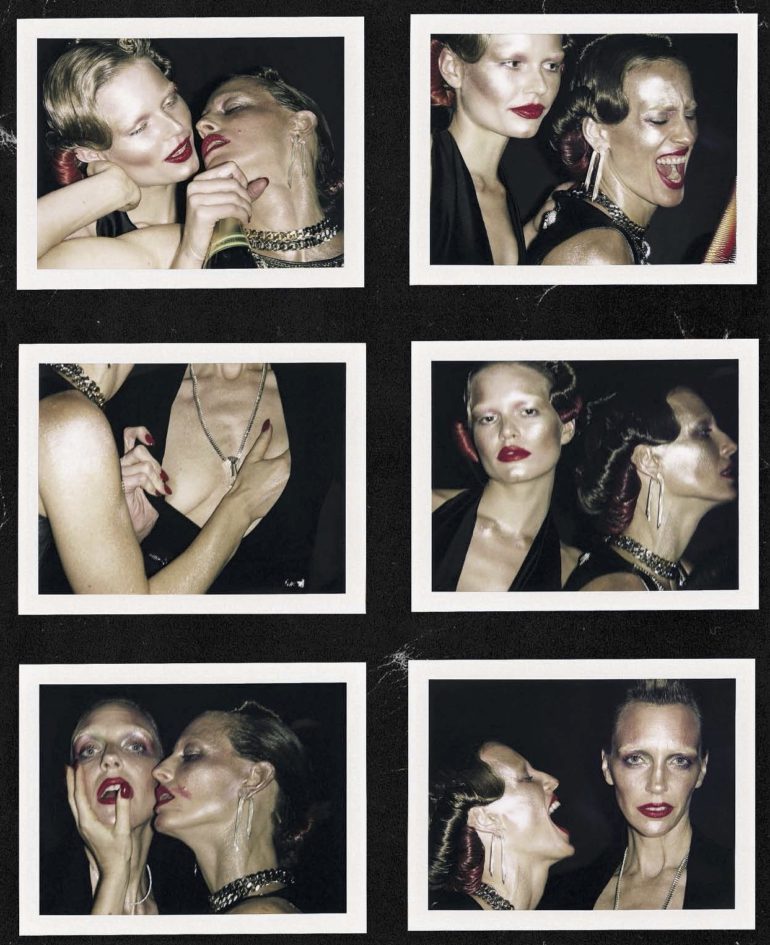 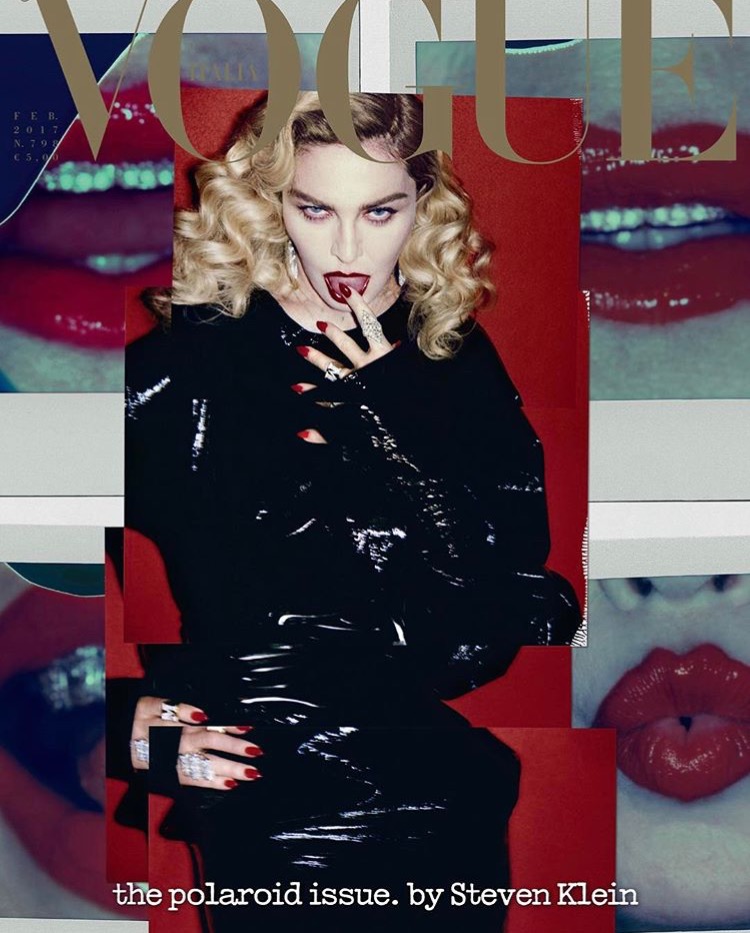