Steven Klein pays tribute to the great, Franca Sozzani, in “The Polaroid Issue” for Vogue Italia, 02/17. This honors the Spirit of Sozzani, a renowned figure of high fashion that we recently lost. Art revels in the unknown, as this story calls out to the liberated souls of high creation. Part 1 of this delicious series is a place where extreme is but a dream. A tale of two worlds colliding. Creativity is on fire and fashion’s the flame, as excess meets an elite class of haute couture. Here we have the vintage elite. Where the eccentricity of decadence was experienced through passionate excess, and, expression was the means by which it was held. This was a decade of distinction known as – The 70’s.

This dips into the vintage playground while spinning in a direction far ahead. And thus, we begin to see the cyclical connection. Working in the Name of Franca Sozzani, one might recognize that there are only a few people talented enough to fulfill her legacy. And, that’s where the poetic hands of Patti Wilson comes into play. In one of the most intoxicating shots of the story, Stella Lucia and her shadow comes down a set of random stairs that are standing alone. Seeming to emerge from nowhere, Lucia appears, with a bejeweled masque covering her eyes and a cigarette hanging from her mouth. Her Dior tulle skirt catches the wind in just the right way, showing a pair of shorts and shin-high motorcycle boots below. Anna Cleveland does double duty as she wears a pair of glamorous glasses, with a white fur jacket with the words ~ LOVE ~ written in red.

The term transformation gets a new meaning, with a change so complete you won’t know who you are viewing. Cleveland pays tribute to the past by putting the 70’s on shout, while simultaneously trekking into the fashionable future. Sammy Mourabit gives us a glam version of modified beauty by daring to bare something strange. Creating a masque like effect, solid gold shadow covers the entire lid, for an avant-garde amalgamation I’m calling, disco rediscovered. Sammy surrounds the orbital field in black, with a thick line running down the brows and around the mouth. Every feature is outlined in the same sinewy shade, giving the skin an extreme edge. Erin O’Connor embodies a walking work of high art, bestowing upon us glamour touched with a beautiful bend. Her face is the stuff of dreams, with an outline of her natural eye-shape circling the orbital area. Touched with a hint of blue, the inner color projects a golden hue. Art invites excess, as her powdery complexion is complimented by a dark wig with blunt bangs. Disco dazzles as sanguine pigments are topped with similar shades of glitter.

Ward Stegerhoek lures us in with a combination of real/faux hair. Guinevere Van Seenus starts us off right with a pumped up dew so exquisite, we aren’t prepared to see it straight on. Satisfied with the side view, we take in the brilliance of her bouffant bump. While, Coca Rocha gives us a red/white/blue version of the victory roll, Karolina Kurkova flashes a bright brimmed hat with stars. Christina Kruse captivates in a leather cap, with netting over the whole of her face. Revved up in a red leather bustier covered with a leopard skin coat, Caroline Vreeland still manages to look cute behind a “Kiss Me” veil. Li Xiao Xing redefines the lines of sexuality by wearing a masculine style Tuxedo. Looking every bit a fearsome female, she stuns us senseless in a top and tales, highlighted by a black, flower patch over her left eye. Luxury and lunacy blend with distinct looks that redefine the idea of beauty. Fertile with fantasy dreams take shape, with strikes of red lining her lower eyes and fully covering lips. Innovation stimulates the scene, as Achok Majak comes face to face with a (stuffed) tiger extraordinaire. 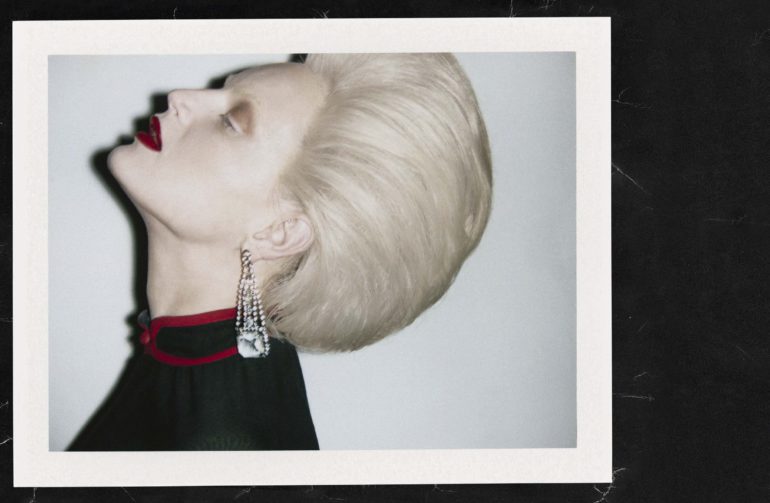 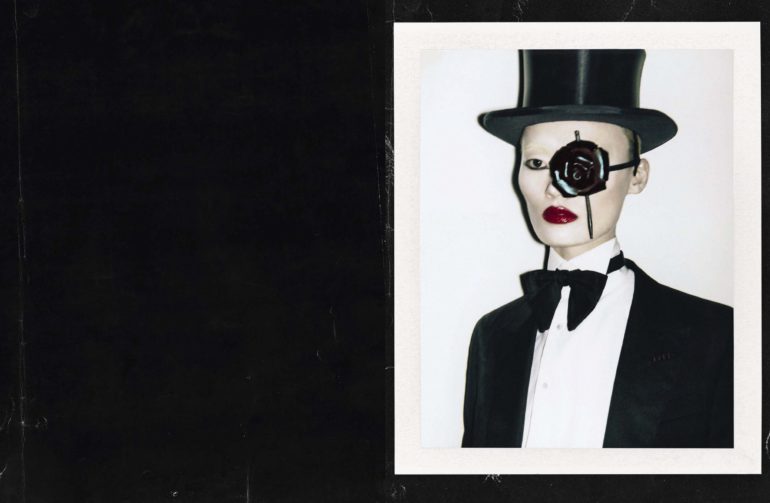 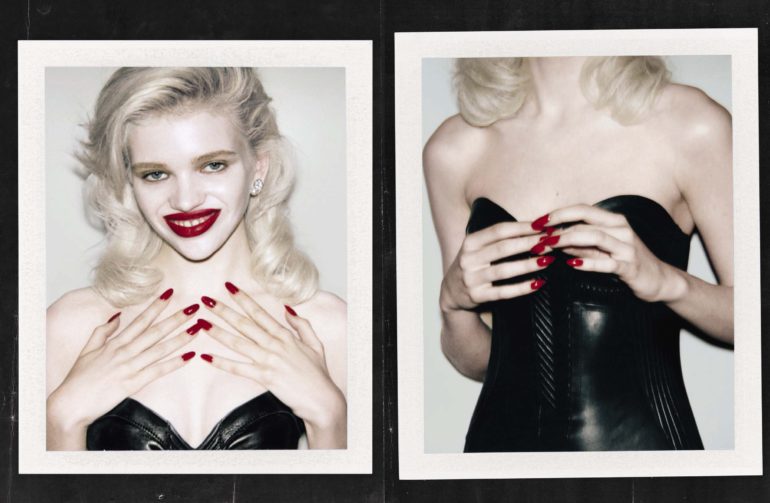 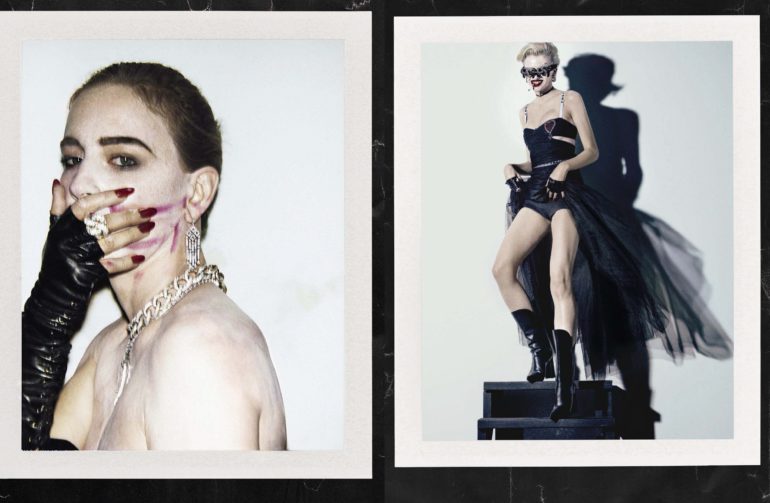 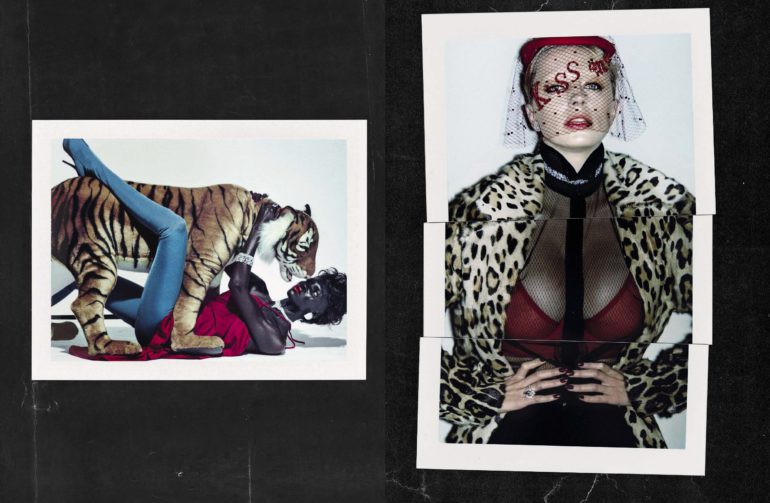 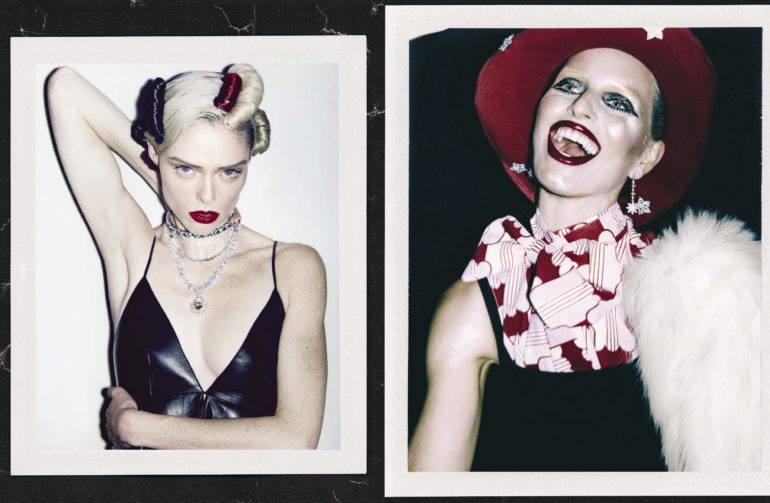 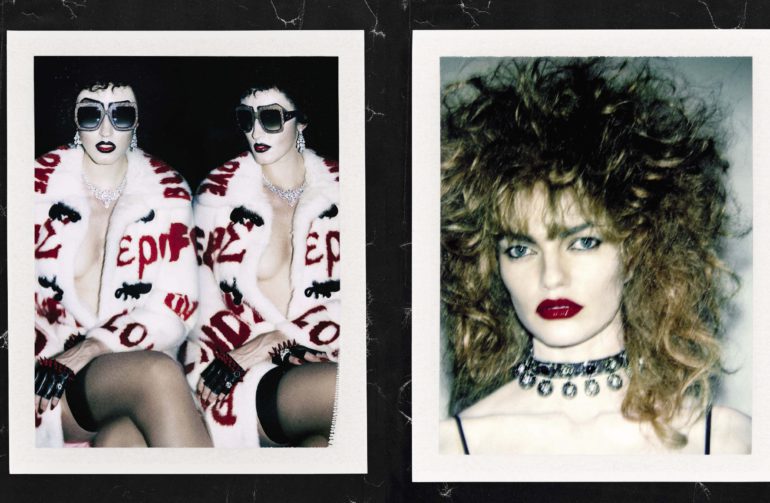 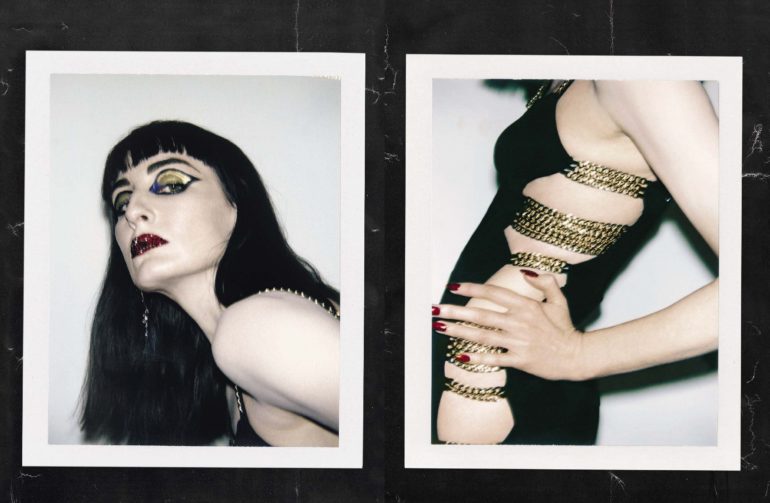 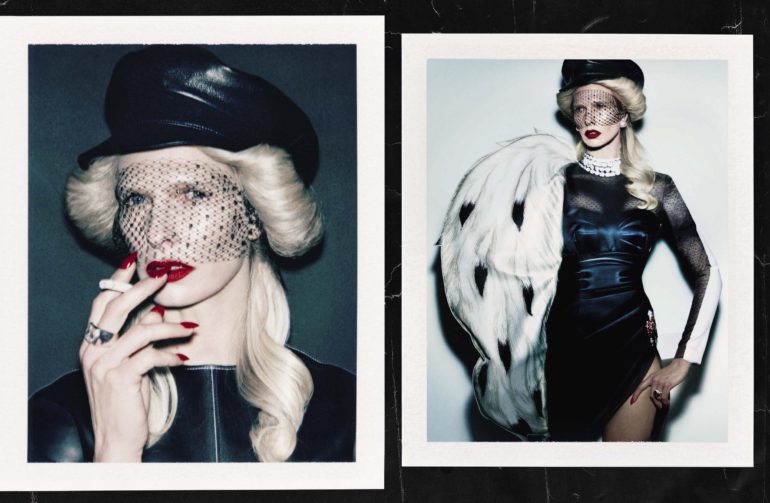 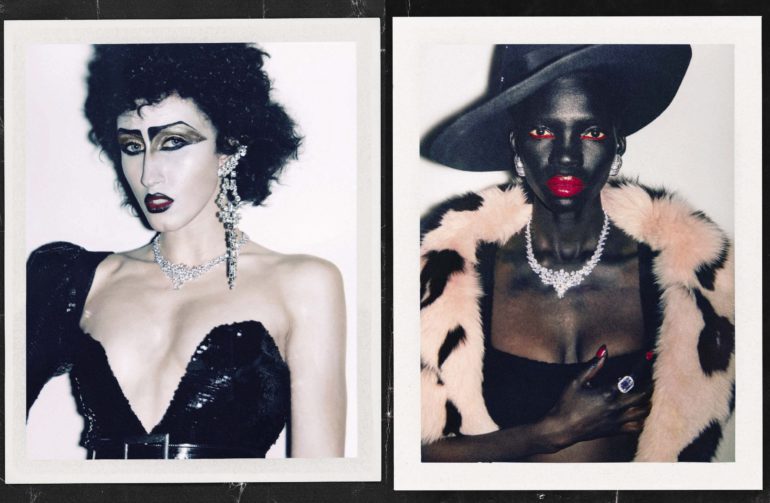 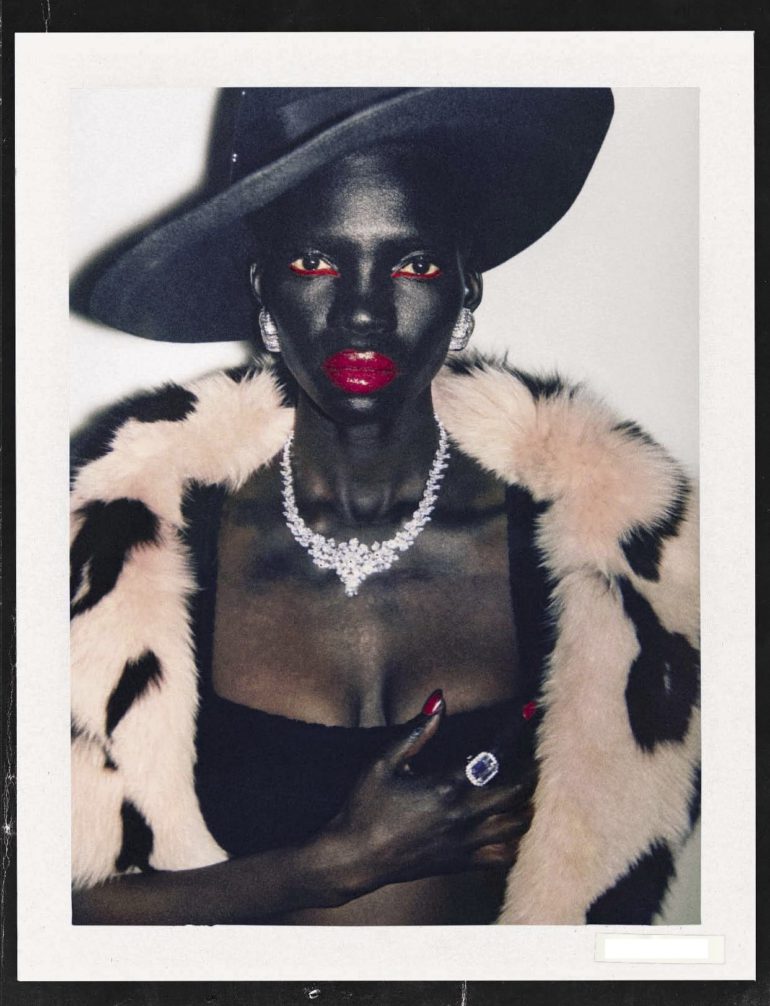 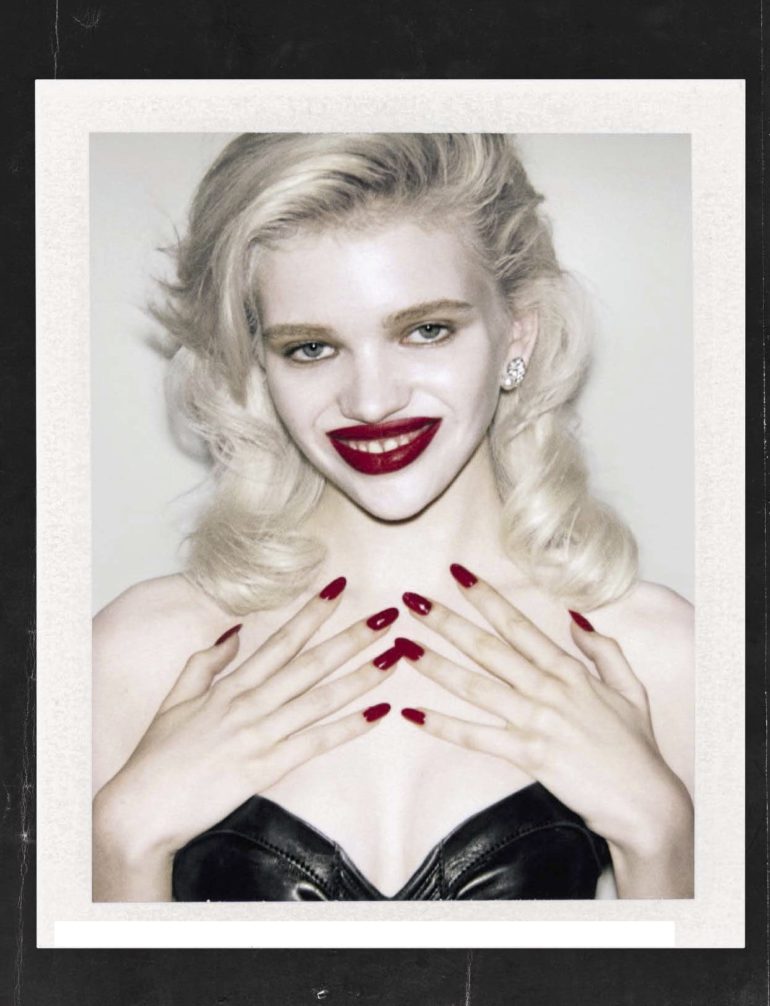 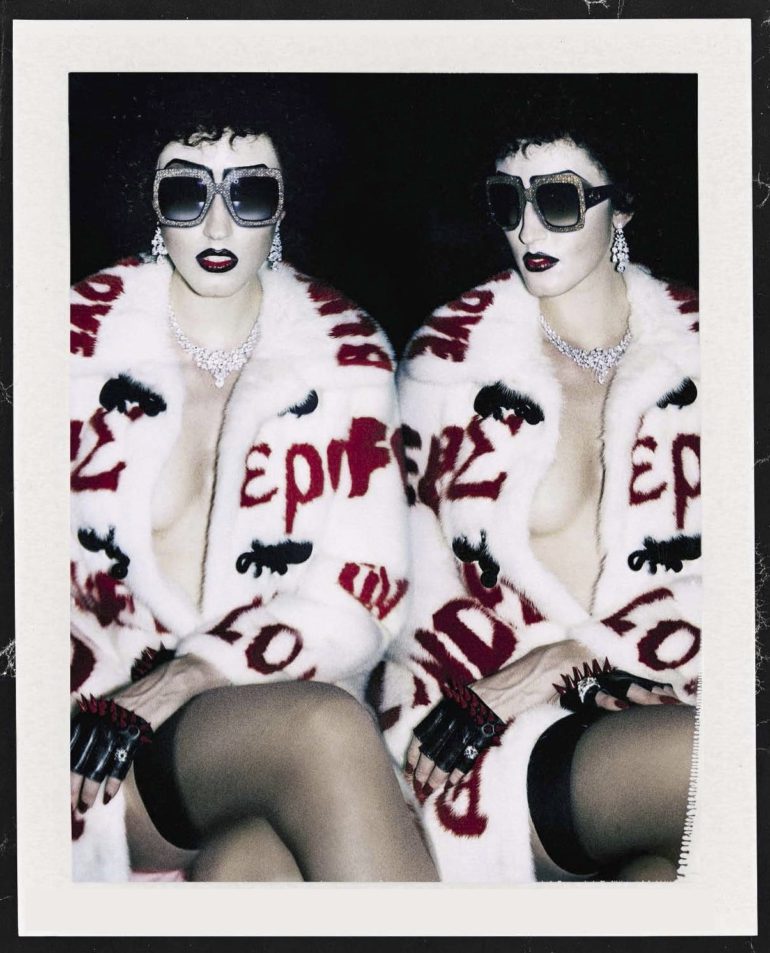 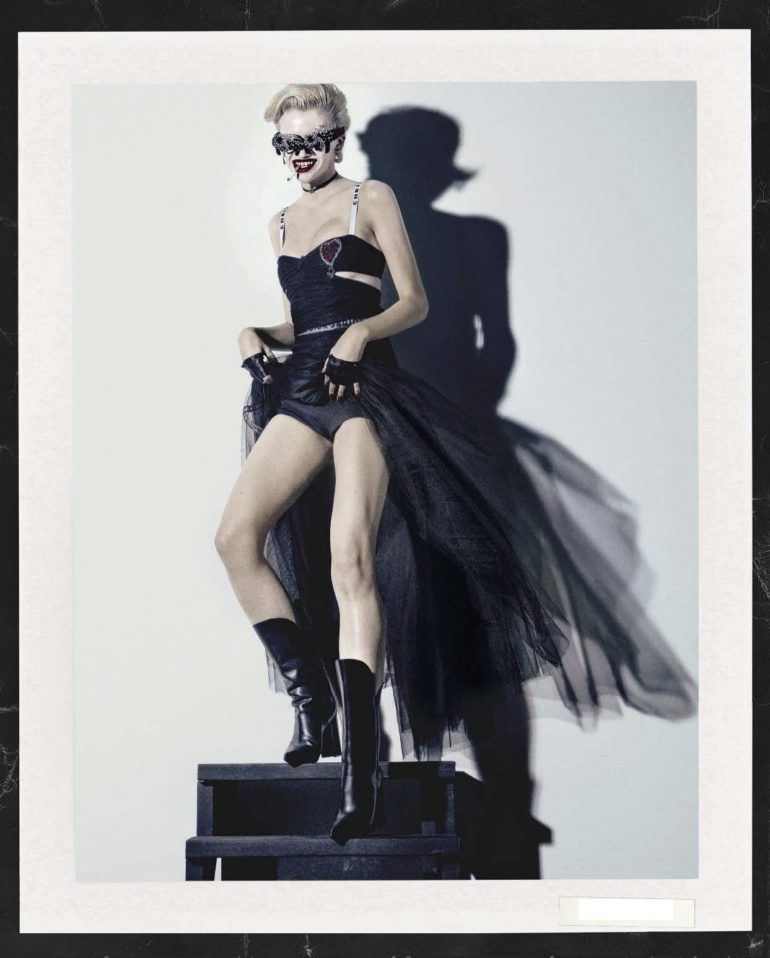 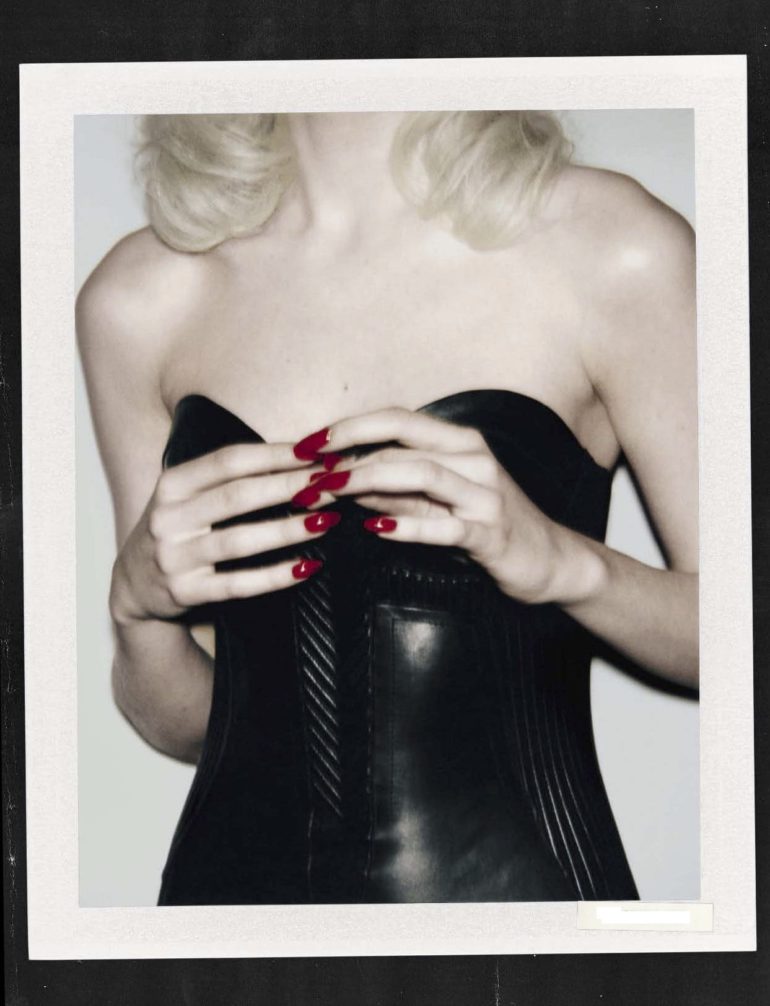 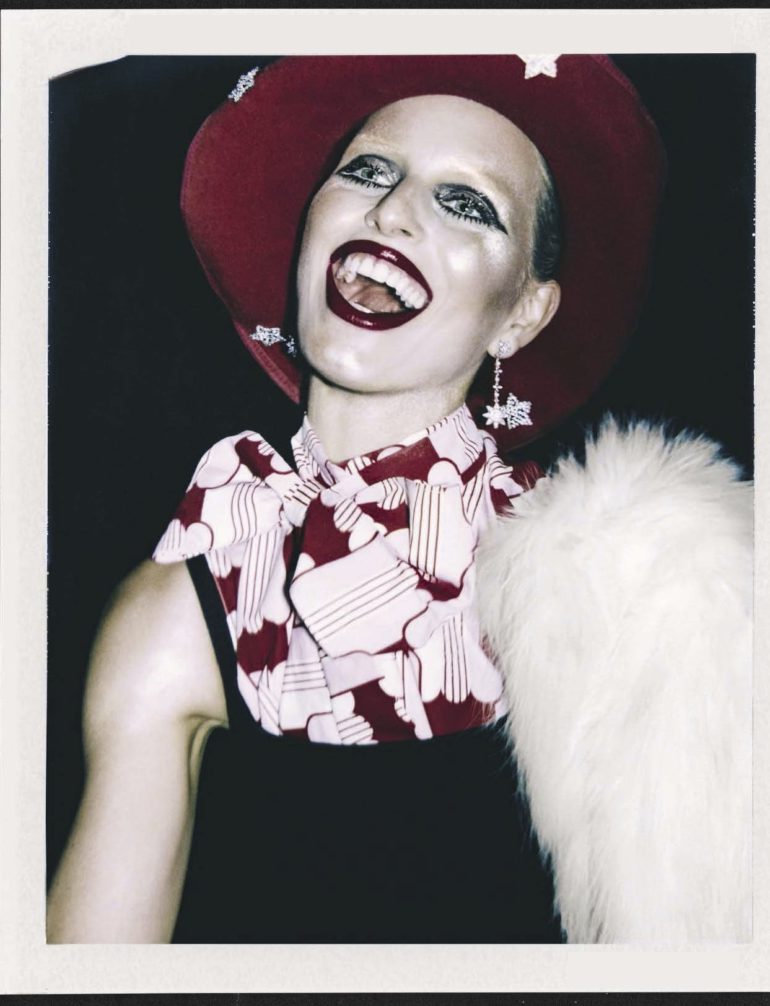 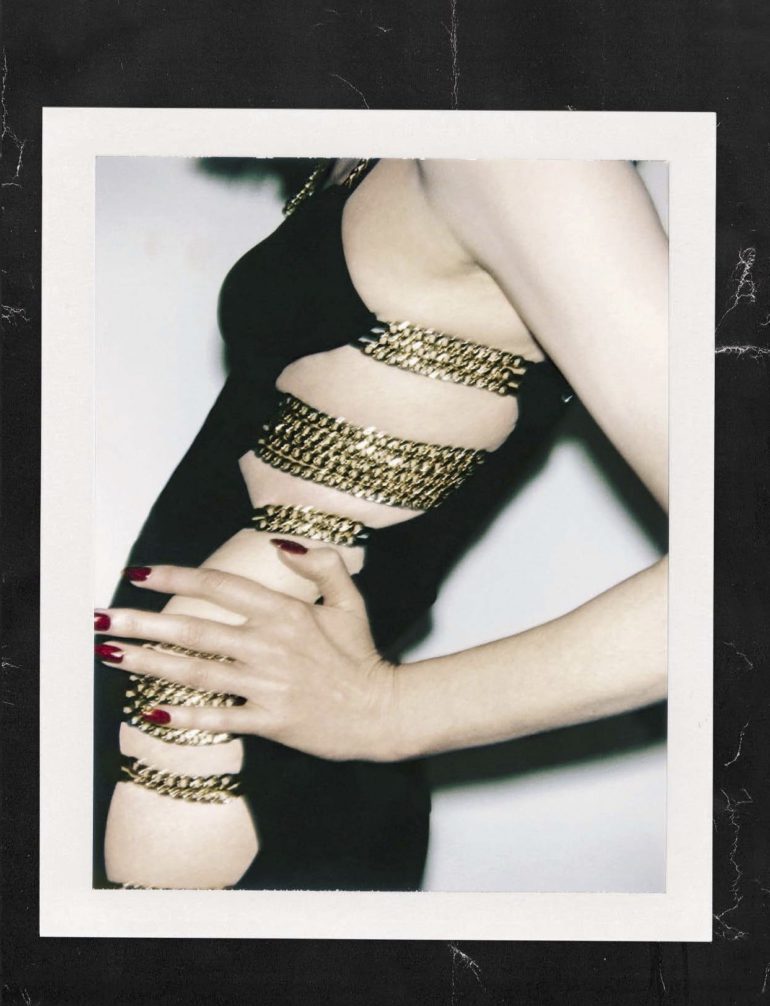 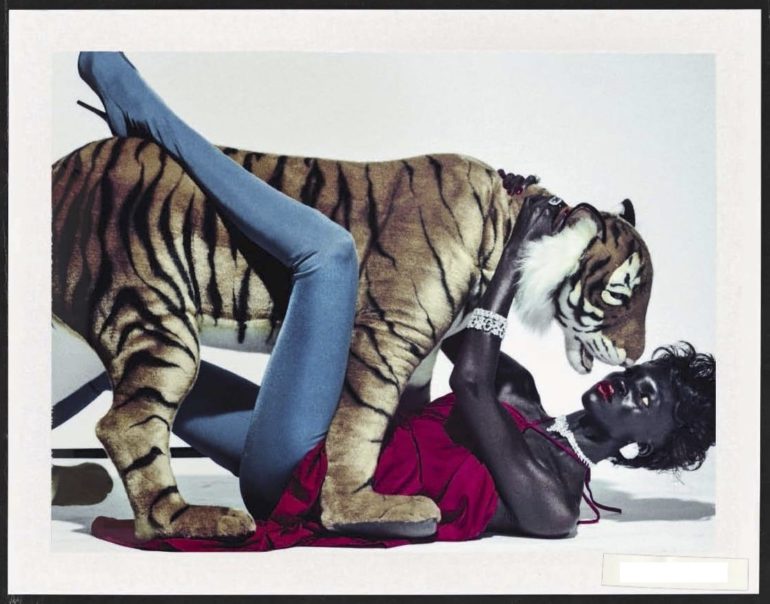 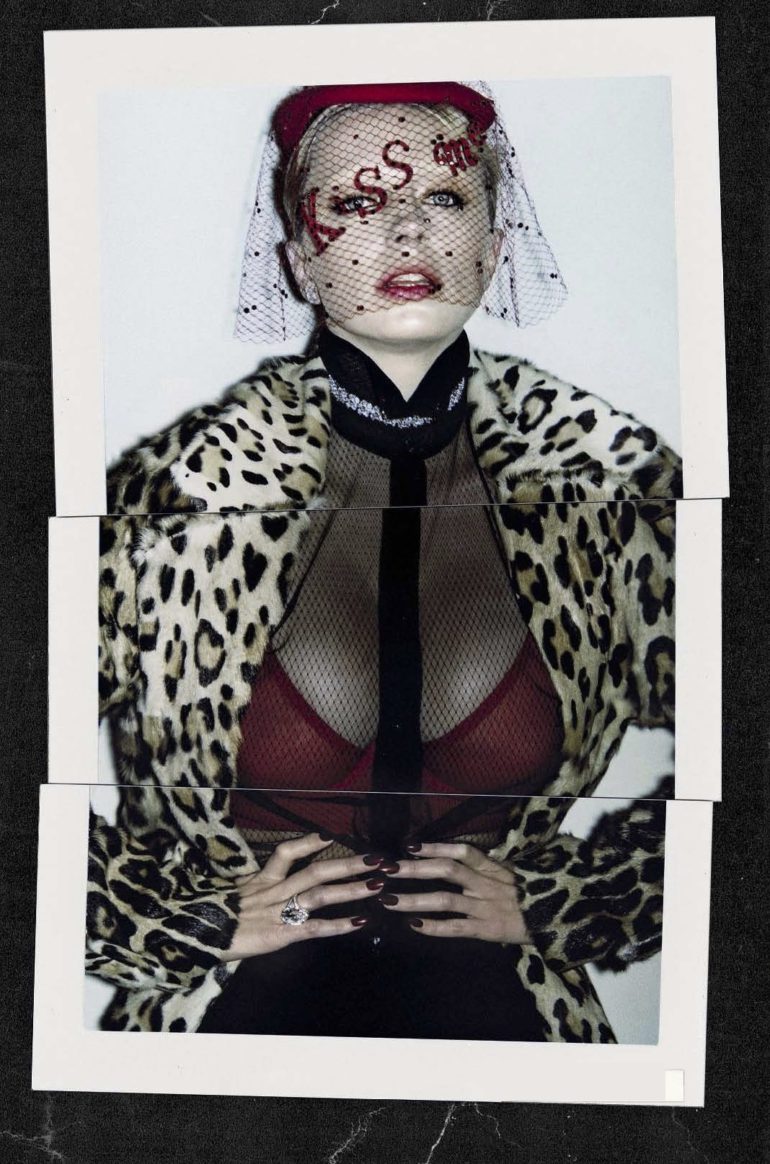 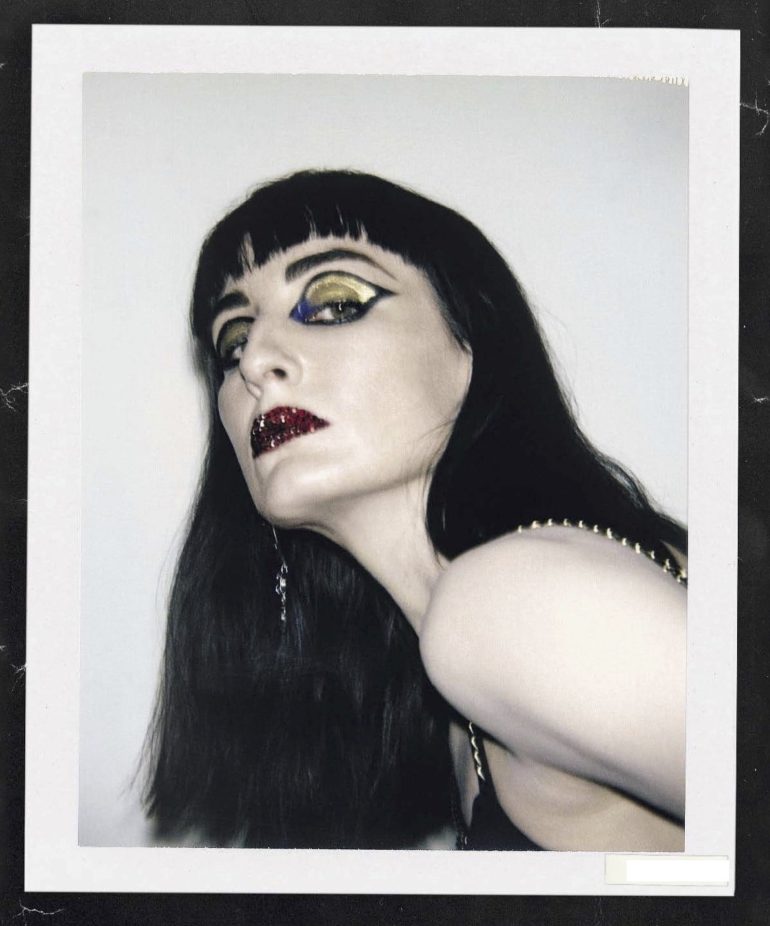 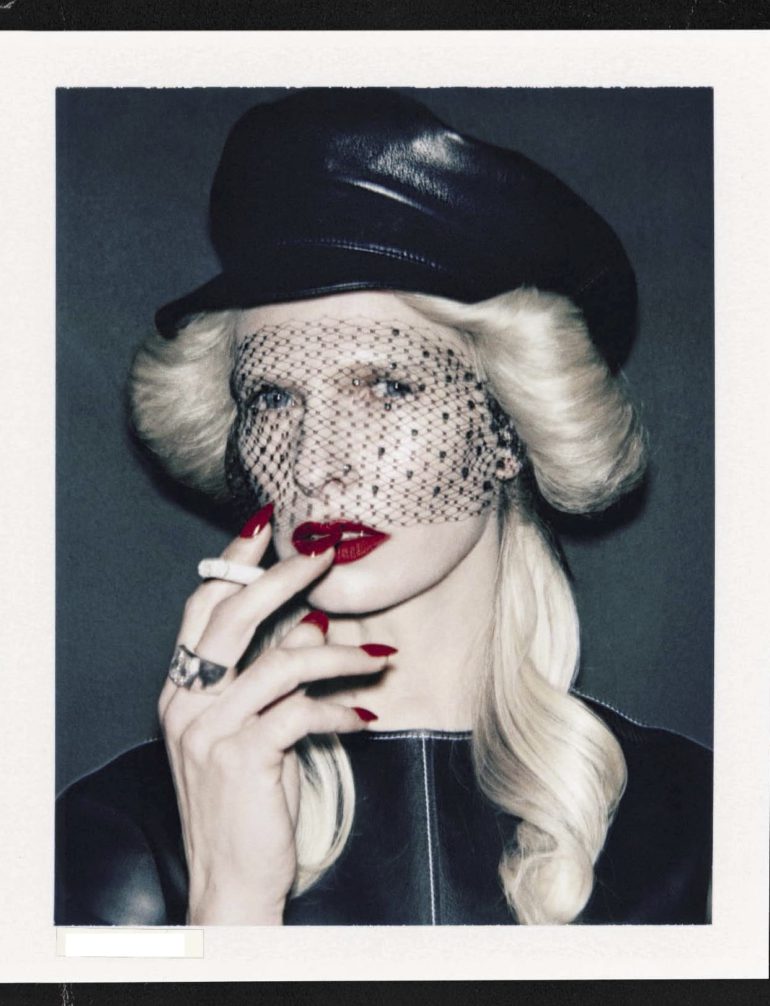 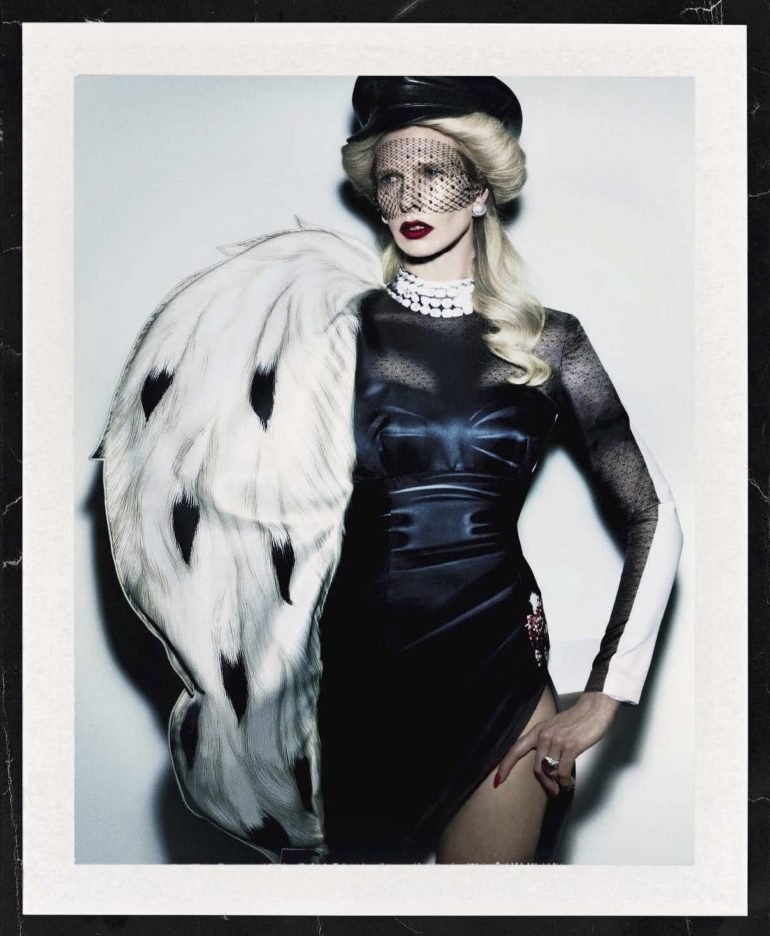 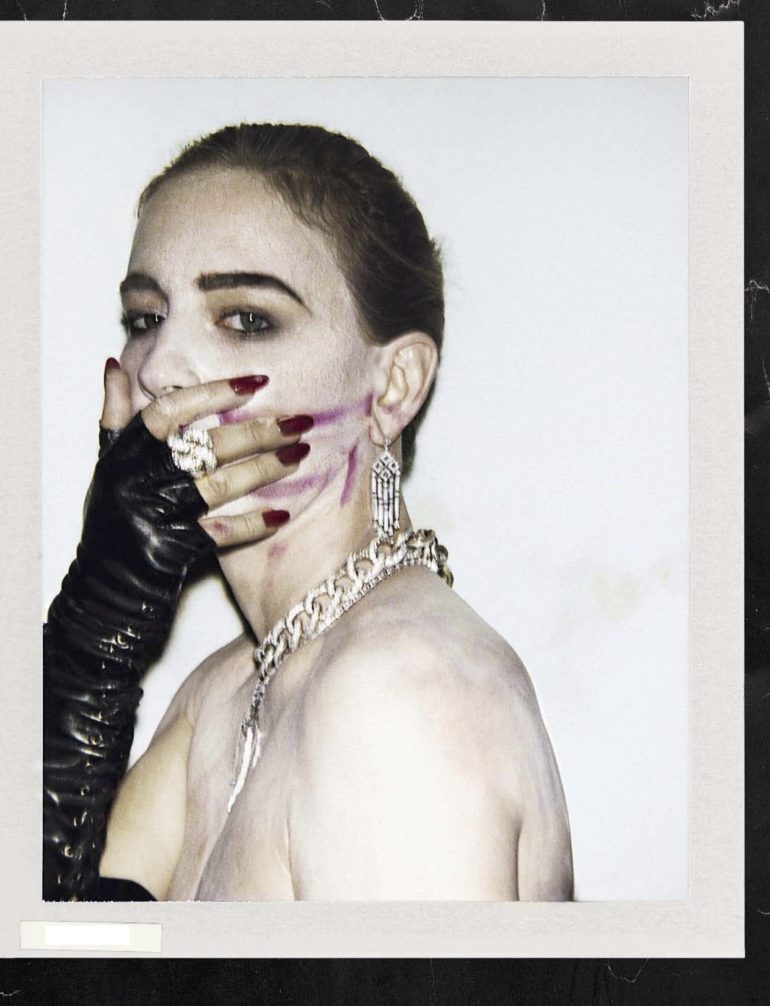 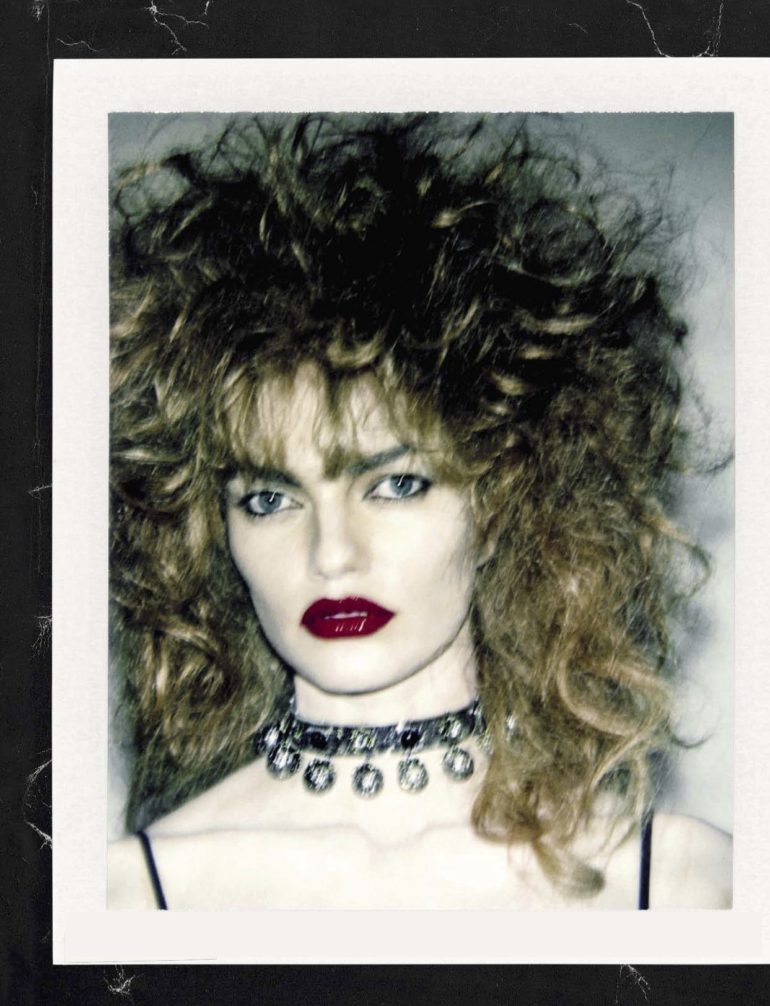 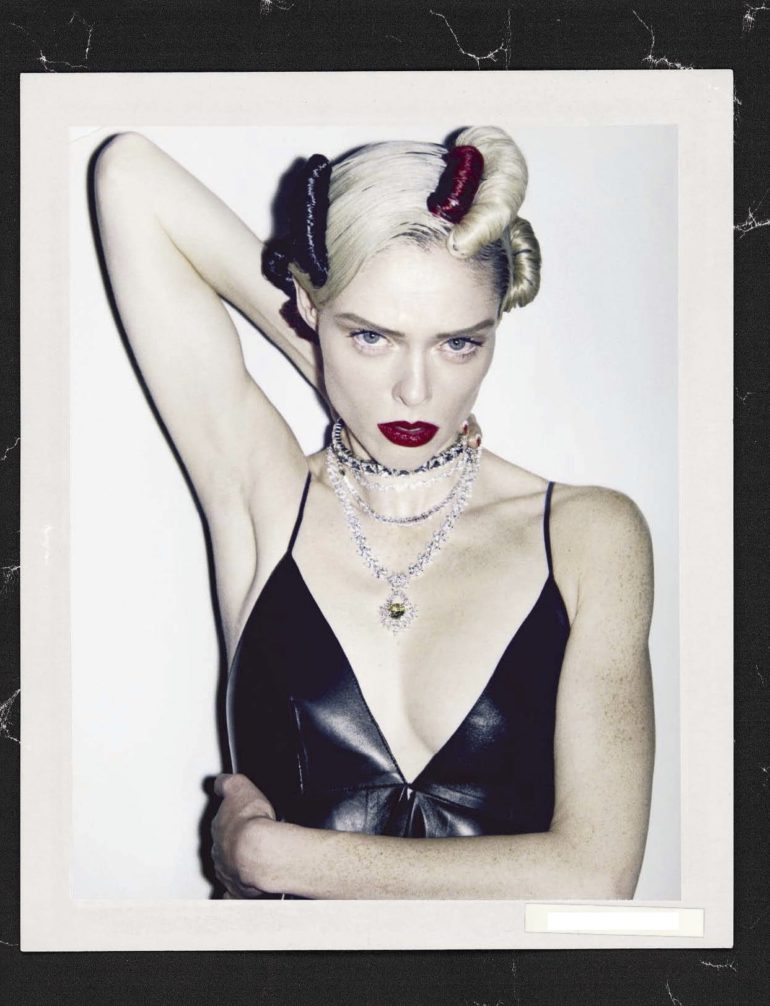 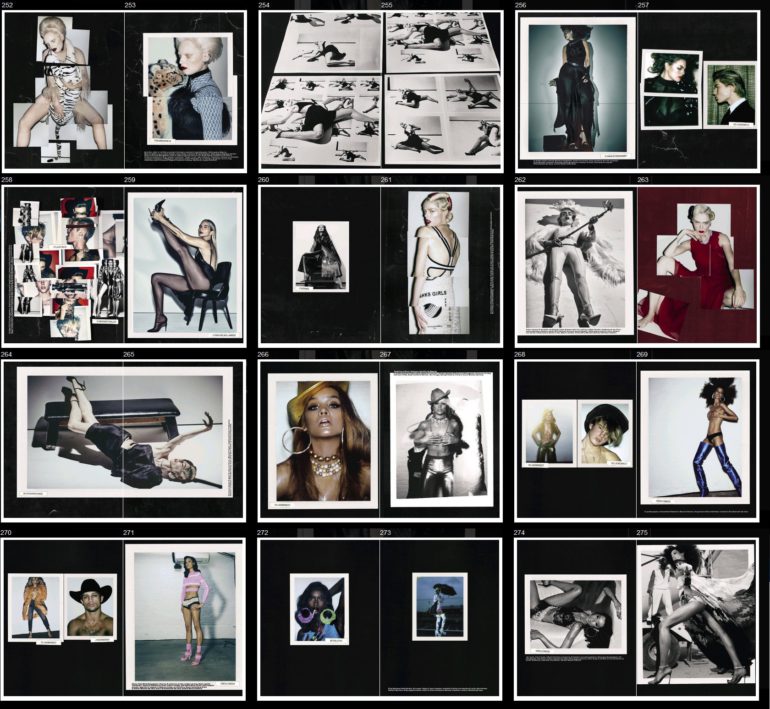