Angelica Erthal, Ina Maribo Jensen, Kirin Dejonckheere & Nora Attal invite energy from the beyond in “Super Creeps” by Sølve Sundsbø for AnOther Magazine #19, S/S 2017. Four fierce females face the fire using their bodies as a source of transmittal. An intoxicating journey takes us to the other-side. We Welcome the Power of Women Everywhere, as We Join the Universal Fight for Our Right to Not Just Survive but to Thrive. Alive with a kind of neo-kinetic super-power, we wade into a world way beyond. Quiet Please… no one shall speak as this calls for a feeling response. In the mystic land of wonder we might be surprised to hear that time has no value. Fire ~ one of the five elements of healing is found in the heart of the desert under the night sky. Expressive imagery illustrates the intensity of vision, with women wielding their supreme strength. Katie Shillingford sinks into the fire of high fashion, standing somewhere between historic hautness and cosmic couture. Creativity combines a cultured overview of society, allowing us to bear witness to the beauty that’s beyond. Finding a universal center, each body is ignited by a light burning brightly behind.

Neither face paint nor makeup can change our truth, as these pictures give a textured overlay of who we are. Beholding such beauty, Inge Grognard honors the truth. Basking in the core of our center we feel ourselves start to rise. Coming forth to meet our inner-guides of wisdom, we hold ourselves open to a new way to be. Compelling creations tell a unique story. Like cave drawings captured on the side of the face, or markings made on the slope of the skin. Each line invites us to visit another plain, while every swirl takes us to another place. Graphic depictions are done to honor native artistry, all traveling down the side of her eye exposing a long held tradition. X marks the spot, with an imprint done in dark shadow over the outer lid area. Letting go of excess, the energy emitted encircles the group, inspiring them to fall to their knees in deference. They do this not in a subservient manner, rather, in an effort to come in contact with earth’s goodness. Feeling the ground beneath them speak, the roar of the spirit is anything but weak. This is not a negative response, instead, it’s the earth showing us it’s vitality and strength. Beauty burns in breathtaking format, as Inge centers this story around the spectacle of light. Not your average makeup tale this feature trip takes us back in time. In the quiet respite of my longing lives a place of truth. Waiting with baited breath we watch as Kirin goes into her own mind. Light flies behind… as she closes her eyes to all of life’s pain letting it fall like rivers of rain. Wearing one of the most unique jeweled headpieces I’ve seen, we watch as the ethereal presence follows her path. Her open silver band bends over the head and then swerves out the back in a curved surprise.

Sundsbø’s work is a quiet source for all things pure. Robbie Doig/Dragonfly Scenery, creates a world unto another world where we are free to be. In the mystic landings of fertile ground we find hope that’s not yet been found. Eugene Souleiman works the story with sweeping gestures mixed with grandiose detailing. Like pieces of clay, he forms hair into works of high art. In one of the most exquisite images of the editorial, we see the tendrilled turnings of Nora’s braids twisting around her head. Standing firm in front of ceremonial grounds, her silhouette is seen in solemn form. Pyramids of purity eject up from the shoulder, showcasing dressing in graphic form. Hyper-modern brows are drawn straight out, giving us an otherworldly illusion. The future rises in her eyes as the black background echos off of her shiny skin. Ina’s red dew blends into a fiery background, while shining from behind, we revel in Kirin’s hair-raising brilliance. Wearing a feathered headdress, Angelica walks away from a burning car with quiet ease, gently putting her finger to her mouth as if indicating the solemnity of sacrifice. Her wild coiffure dances in the dark sending forth a source of inspiration. The hair flairs in a fury of light as this inflamed image is not meant to be absorbed in literal form. It’s meant to awaken our souls and set us free. 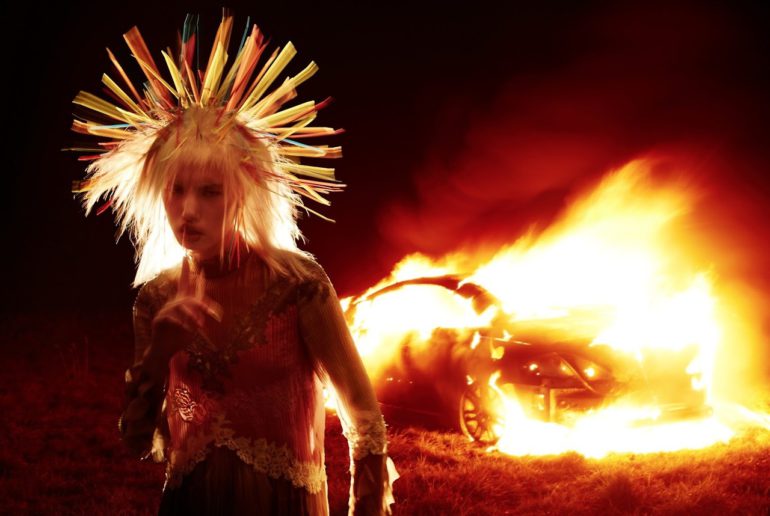 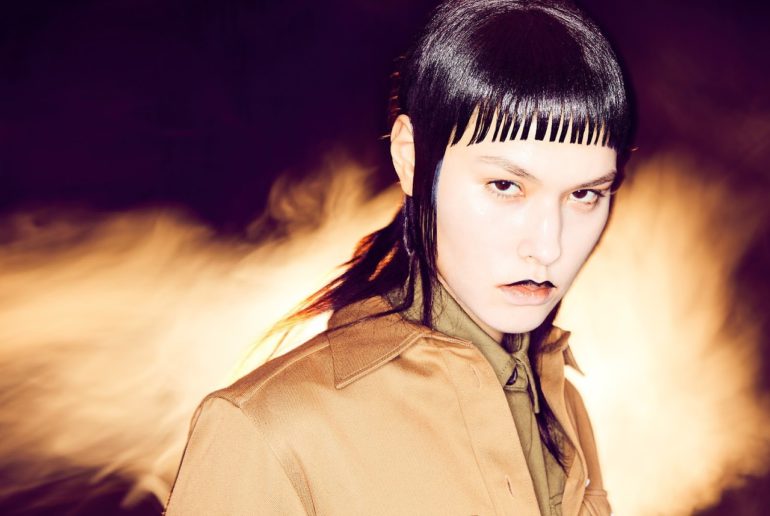 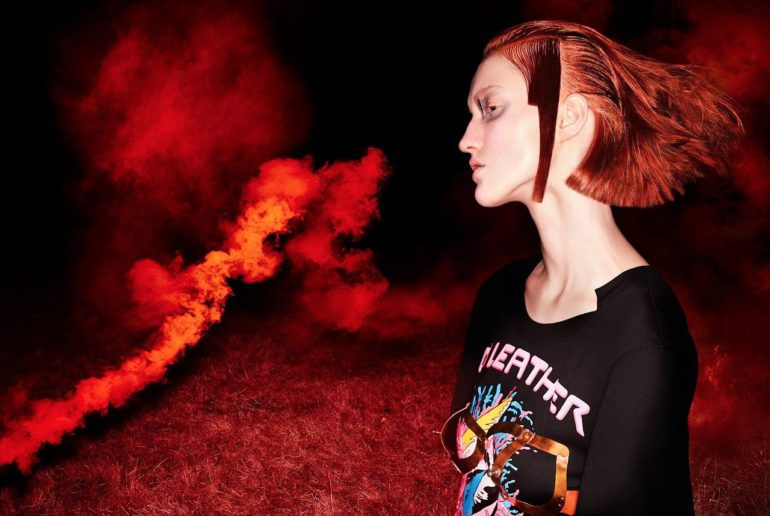 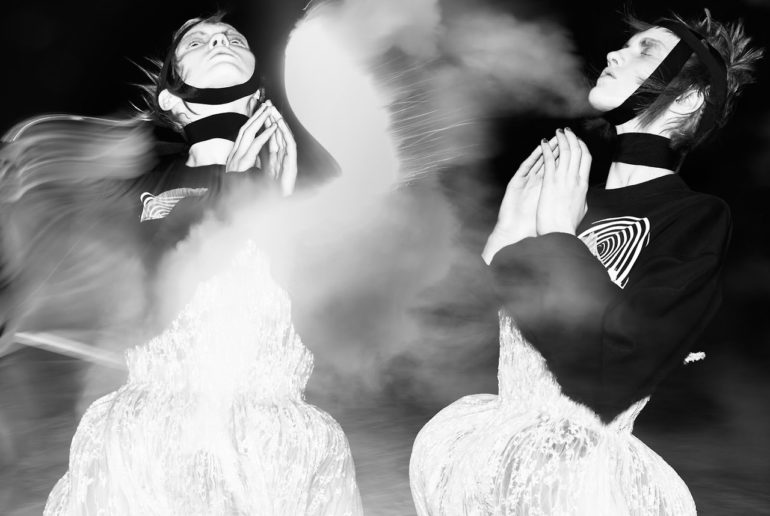 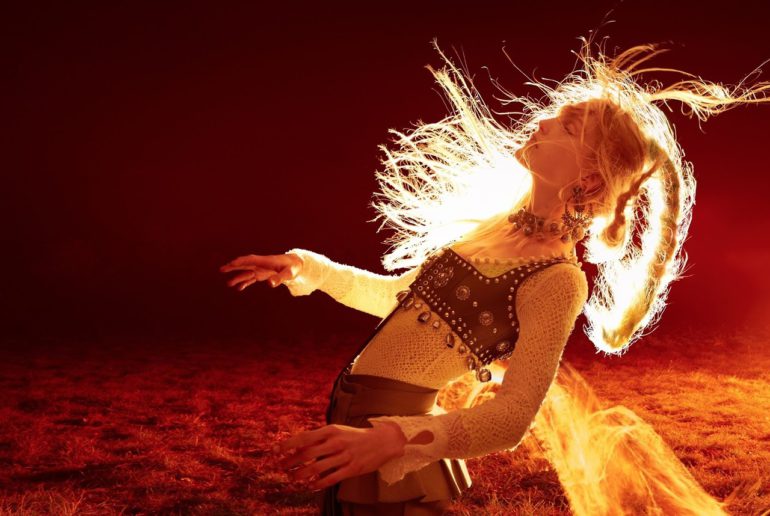 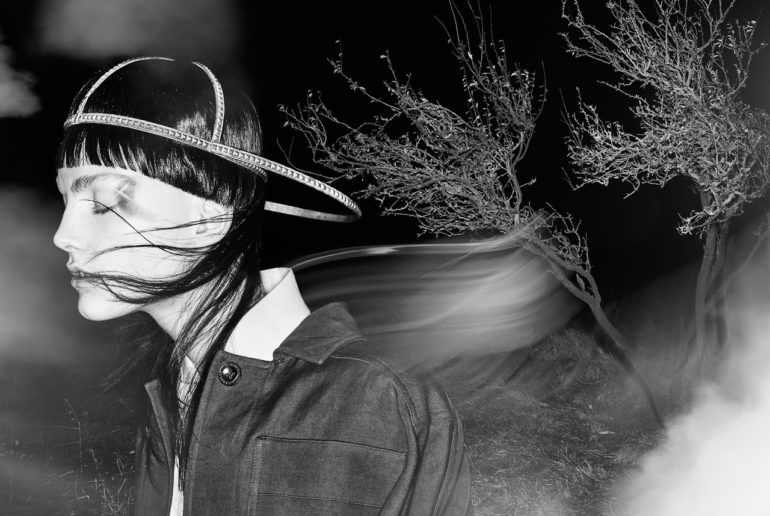 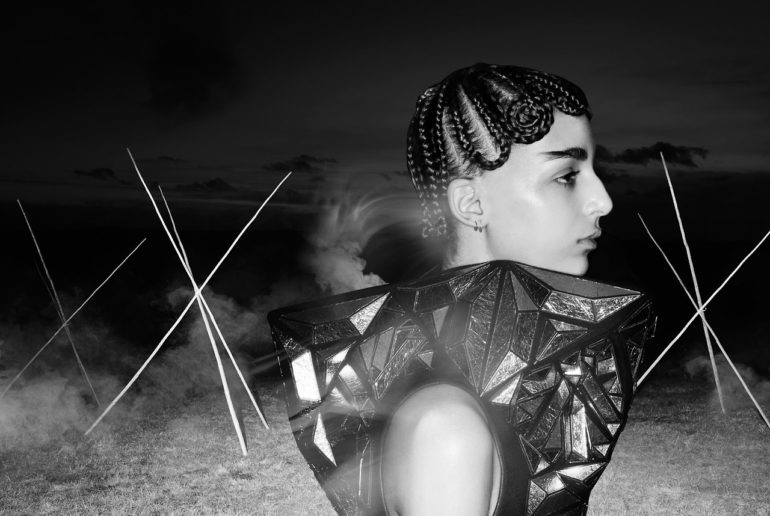 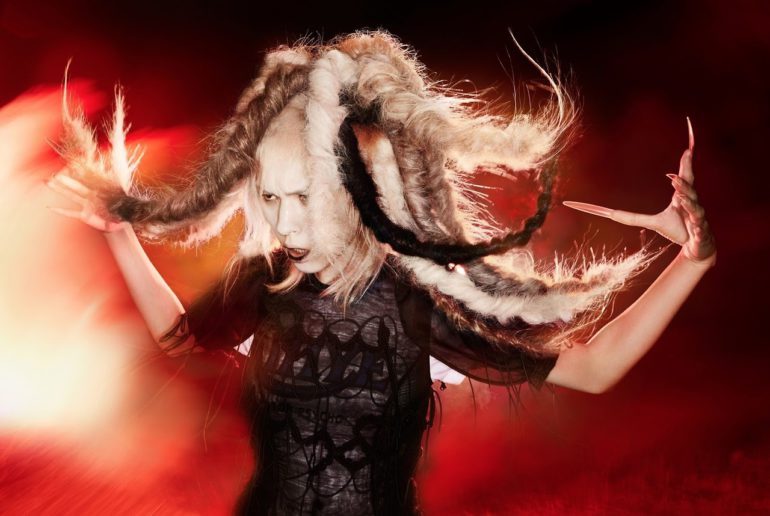