Edie Campbell “transforms into a punk princess” by Tim Walker for The Creativity Issue, i-D Magazine, Spring 2017. The stranger the better, as this story celebrates the punk induced sub-culture of the 70’s. Creativity captures the mindset of the times, with styles that reach back into the era of the evocative. The theater of the streets come alive, as this editorial honors the intent of this movement. Edie says it best when speaking about her beloved London Town, “Nowhere is there a place more plugged into the youth movement without the goal of getting more money.” The cultural exposure of art beyond concept is undeniable. In that same vein, the subculture of punk was focused on freedom. Fashion diversity was a place where all could be embraced. The idea was to create a safe space, where feelings were not only tolerated but were fostered. Different forms of expression were conceived by bringing forth a fusion of ideologies. The more extreme the better. By giving youth the freedom to explore meant the future would reap the benefits. Artistic interpretation is put to task, as each image explores the bounds of spacial reasoning. Walker pays tribute to the haute history of Past Punk. So distinct is the fusion of sartorial artistry, one is swept away by the effect.

Jacob K hits it hard with wares that debunk the derivative styles of modern day punk. This sticks with the power of primary colors, by bringing in bold accents against a black background. Designs make a statement, with conceptual pieces that play to the pioneer punk theory. Jacob goes in for the kill with styles that aim to thrill. Straight forward elements allow him to attach a more modern aesthetic, while still honoring the original treatment. The forgotten element of Punk Inspired Fashion is it’s willingness to make fun of itself. Picking the most opposing items he could find, Jacob fuses these provocative picks. Recycled t-shirts by the London based OLOAPITREPS provide the perfect backdrop for each picture, while, Edie wears shoulder pads by Contemporary Wardrobe Collection. Proving the idea of going punk is alive and well. Louis Vuitton gives their version of punk inspired wares, with a cropped jacket worn over a pair of pants ripped up the sides. Another cool look has Campbell against a wall, wearing a Balenciaga menswear jacket, with a Connor Ives shirt-dress spilling out the sleeves. These looks are captivating, as we find ourselves inspired by depictions of rock legends. These looks bring together the most obscenely chic collection of punk couture.

Clothes are such statement pieces it’s easy to focus on fashion and forget about the face. Art/excess collide as Lucia Pieroni brings beauty back into play. It’s been true that in the pantheon of punk history we often get a view from the top up and the neck down. That’s to say, with such vibrancy the face is often forgotten. But not here. Pieroni plays with the idea of fusion. Application is abstractly realized, as strikes of color are cast over the skin. Each shot is given an altered vision, from black stripes that hit the cheeks to red that sticks with the same football theme. The eyes are alive as primary spies, letting purple plunge over the entire lid, from the lash-line to the bleached brows. Jagged edges get extreme with aggressive green aimed to careen. Opposing colors compliment the scene with converse shades that make us scream. Yellow blasts itself into the orbital round while an aching orange tone bleeds on down. Just to keep things perfectly imperfect, Pieroni adds to the mix poetic red lips. Anthony Turner amps things ups with a black wig. Turner mimics the jagged edge of true ~ Punk ~ with straight spikes that give this series edge. Past Punk Meets Future Punk with Evocative Styles Meant to Push Limits. 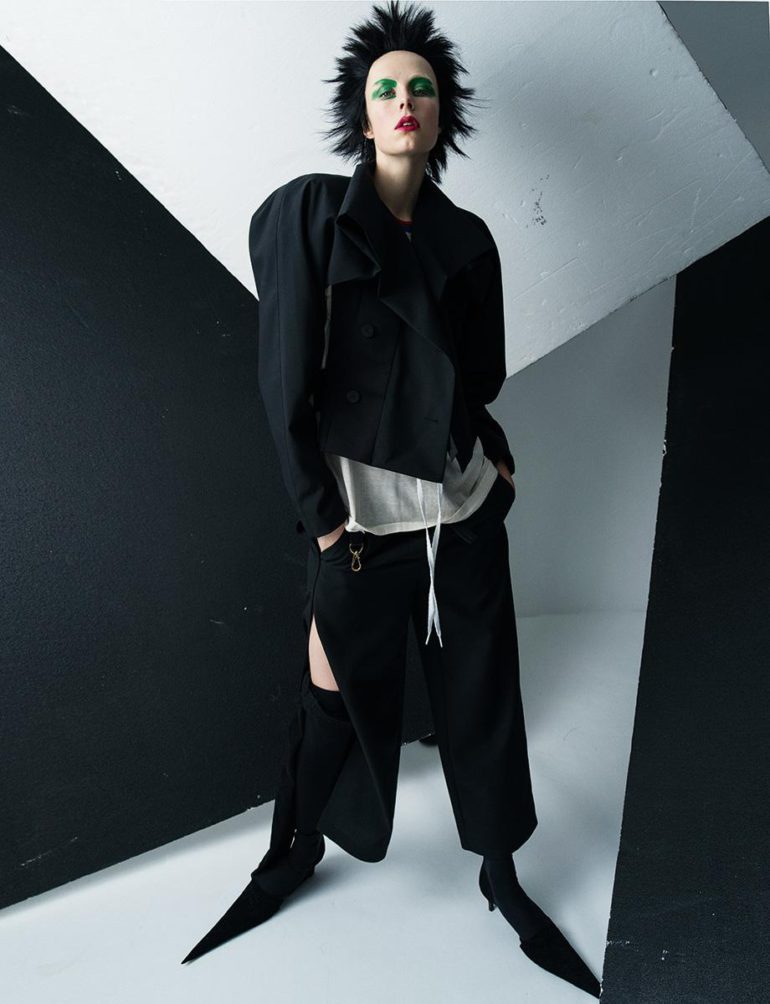 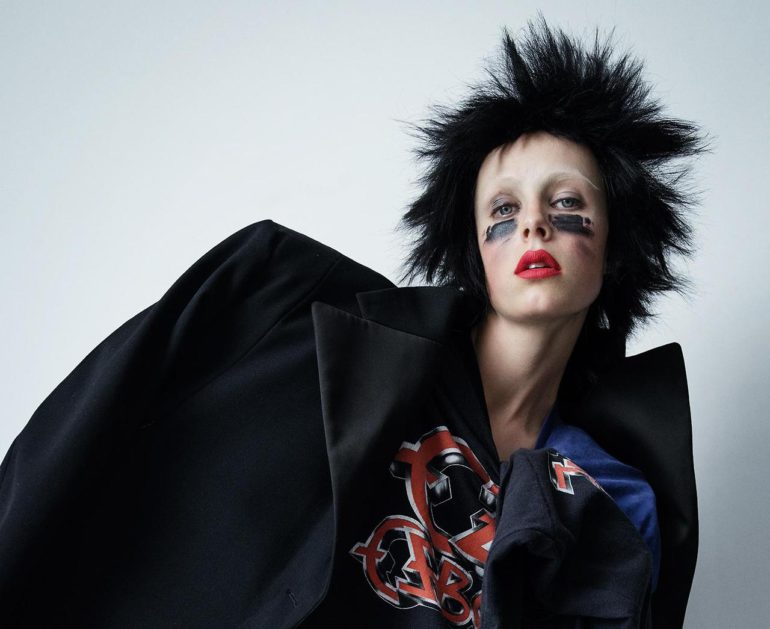 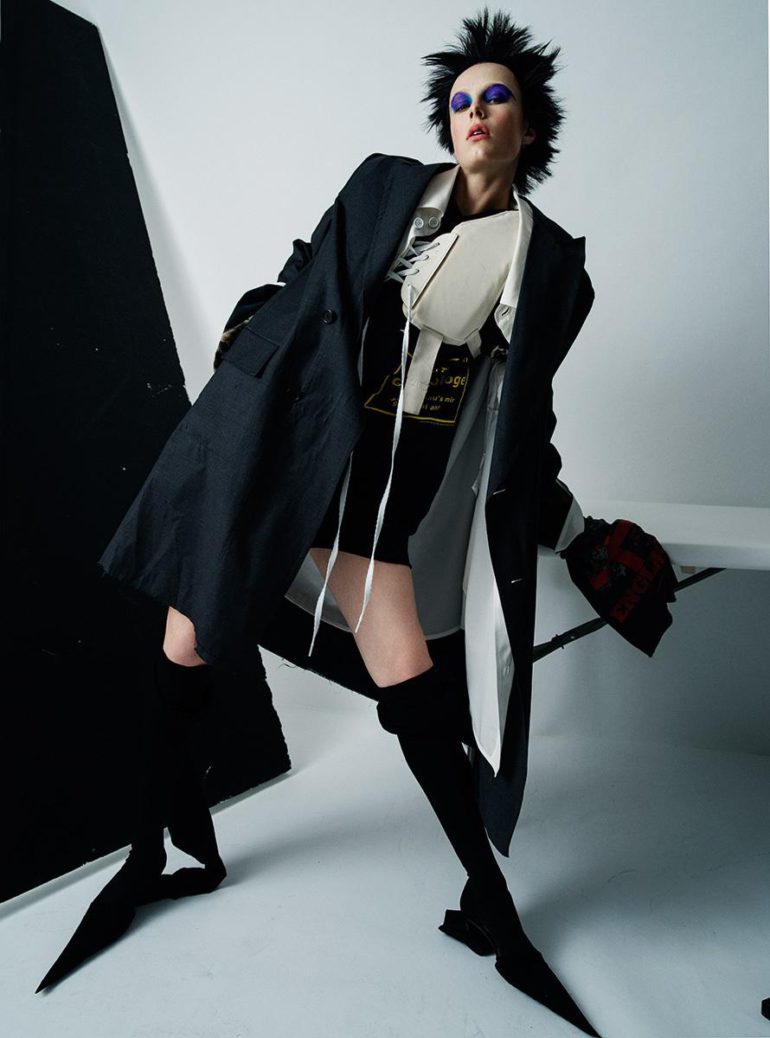 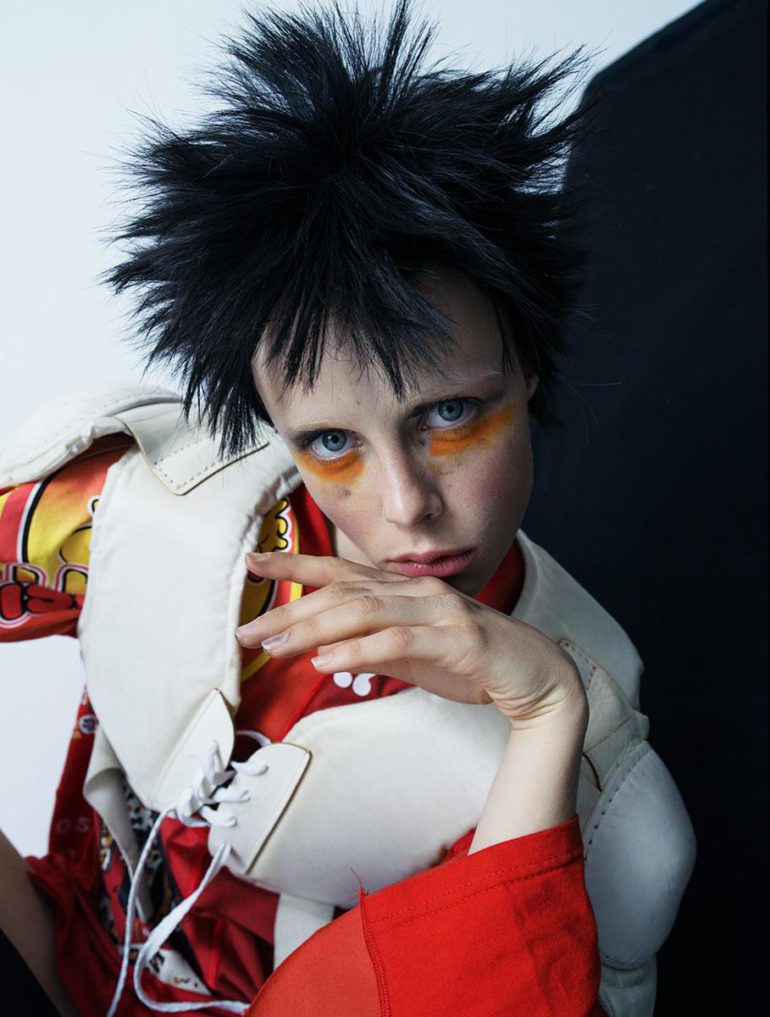 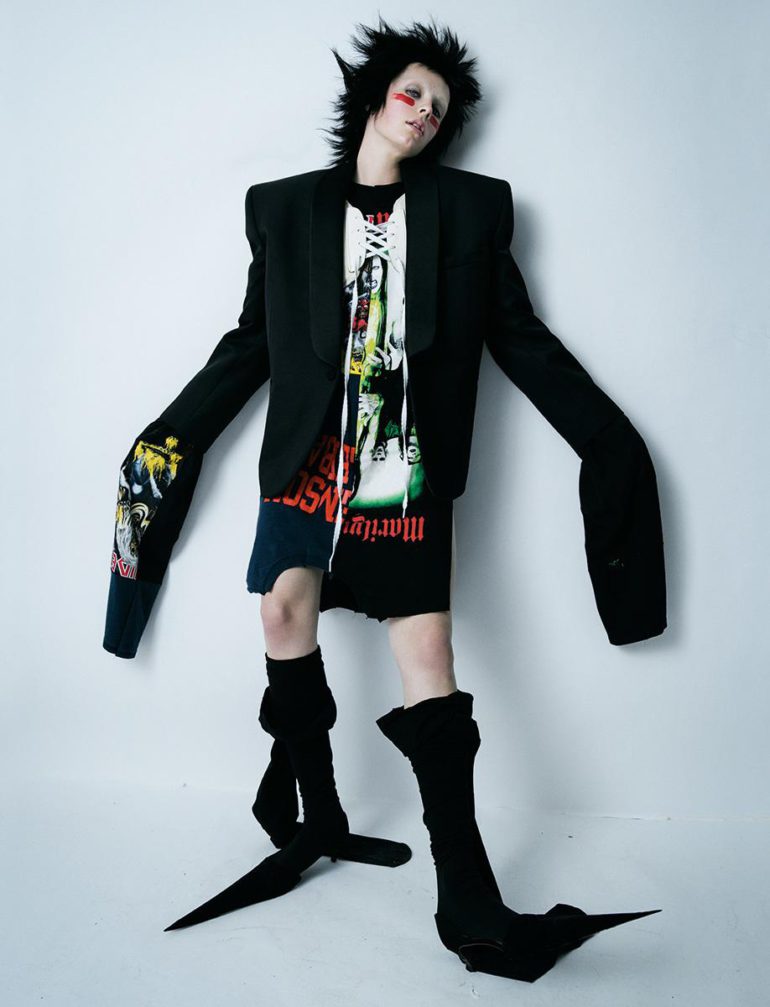 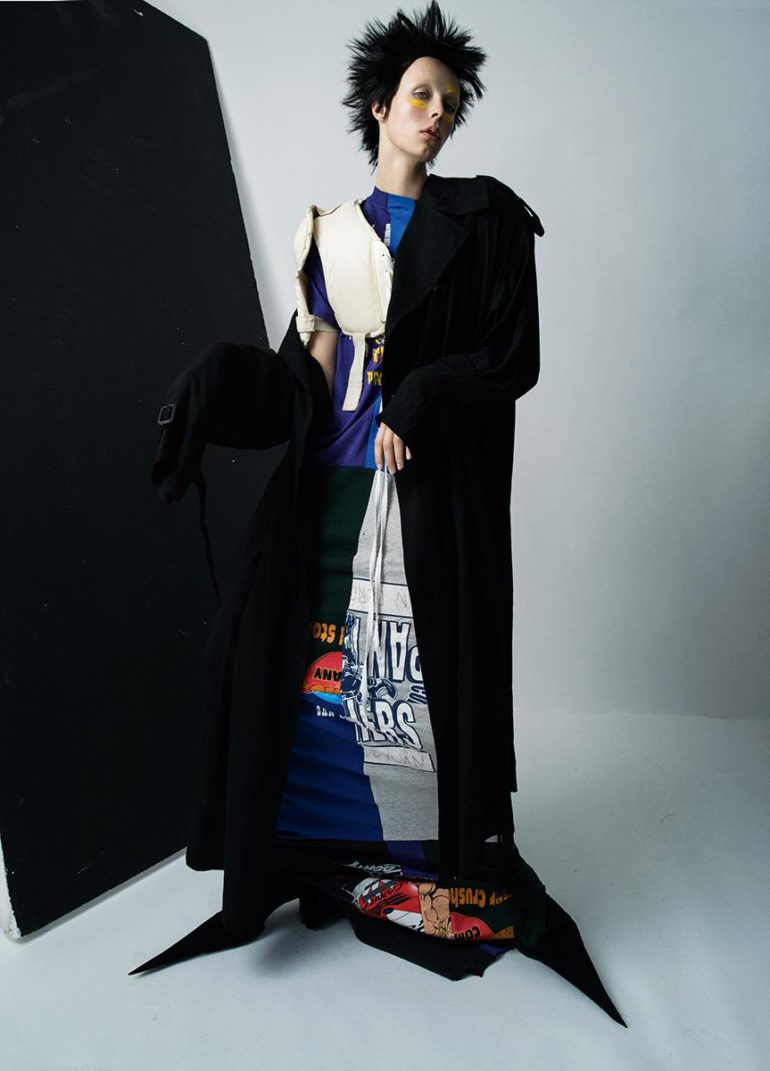 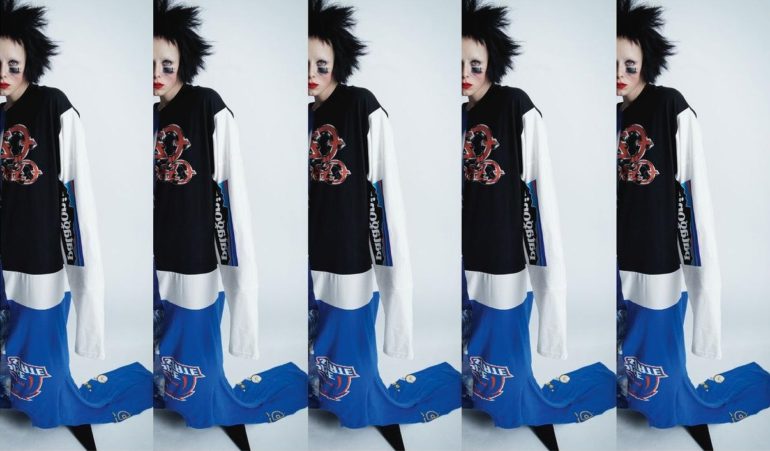 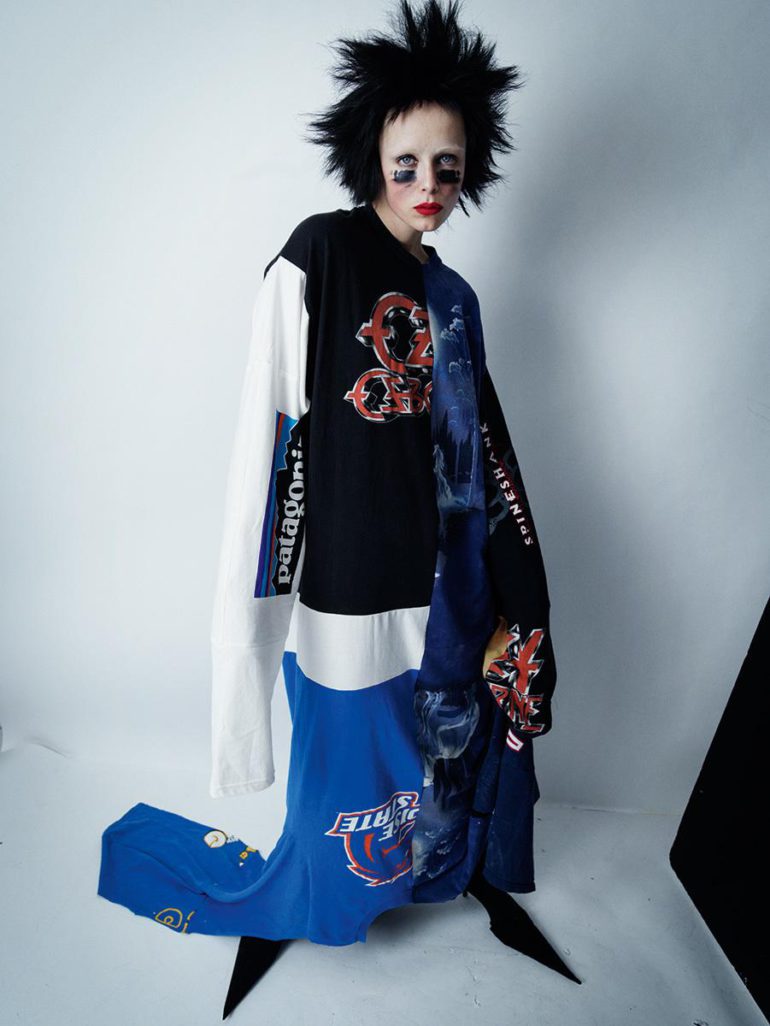 The Theater of Fashion Opens With 'The Lion King'