Mona Matsuoka explores the ancient art of beauty in “Japan Spa Concept” by Michel Comte for Vogue Italia’s Beauty Supplement, 05/17. I seek to devour I long to display as delicacy ponders the pageantry of play. Sitting in the lofty palace of my precious mind artistry is found in the decadence of time. This celebrates the alluring nature that’s found through the mind/body connection. “Wabi-Sabi is the art of finding beauty in imperfection and profundity in earthiness, of revering authenticity above all”. Thought to be, “everything that today’s sleek, mass-produced, technology-saturated culture isn’t”. When I think of this in a sincerely conceptual way, I am drawn to the raw, untamed borders of beauty. Take the idea of evolution expressed as, “tenderness gives way to the aching elegance of an abandoned building or shed.” That image paints a picture of pure poetry. As I let my eyes peruse each page, I understand with stunning aplomb who I am and where I fit into this world.

It may be tempting to look at this beautiful woman and see nothing more than someone staving off the hands of time. However, what I see is a cultural phenomenon at play. One that depends on the regalia of rituals, and the spiritual and philosophical traditions of Buddhism. A female honoring her tradition, we witness her femininity in a way that empowers her being. Whether she’s sitting on silk made from colorful blocks, or laying in front of a picture window as fabric drapes over her body. This is a nurturing of the soul. Ayako Yoshida uses subtle fashion statements as a source of strength. The floral motif of the surroundings bring to mind the centuries old art of flower arranging called – Ikebana. A peaceful state that forms a bond with the branches, flowers and leaves. “The Ikebana is not a way to distract, to the contrary, it’s a path of concentration”. And to that end this phenomenon can be applied to anything. This strict discipline requires silence, searching the balance of forms. Reluctant to show everything at once, preferring instead to explore the intuition of the unsaid.

Comte uses the camera to captures the curves of the skin. It openly allows the pictures to pour over the page, like art slowly erupting. This is not an invasive exercise, rather, it’s the symbolic show of a woman expanding. Shifting in subtlety she seeks to find peace. Here we are speaking about the idea of mind revolt, as we watch her move to the music of Matsuoka. Beauty beckons as makeup proper is not on scenic display. The foundation of the face is observed in creative context as cosmetics take a unique approach. Every female exudes extraordinary qualities, as humanity echoes throughout. Raw and untouched, Aaron Smith Henrikson captures the visual character through the tonal use of color and craft. Meeting with it the distinction of design. Swathes of scarlet show off in graphic format, as a triangular shape rides down the back of the neck. Cinematic colors lend to the dramatic appeal, while a burgeoning blast of red devours one side of her face. Aaron’s tonal abstraction mimics paint on a palate. As a blast of white powder erupts around her hairline, fatefully falling over her shoulders.

Pretty is projected with a sense of truth attached. This story is a sanctified process. For nothing is done in useless measure, rather, it is explored for future good. Chinatsu tops things off with one of the most inspired collections I’ve seen this season. To simultaneously honor tradition while forging ahead. This haute head collection goes beyond the idea of exploration and ventures into the realm of revolt. Beauty blends from the fluid forms of floral head arrangements, to coiffure molded like heads of clay. Revering authenticity above all else, this honors the acceptance of both transience and imperfection. 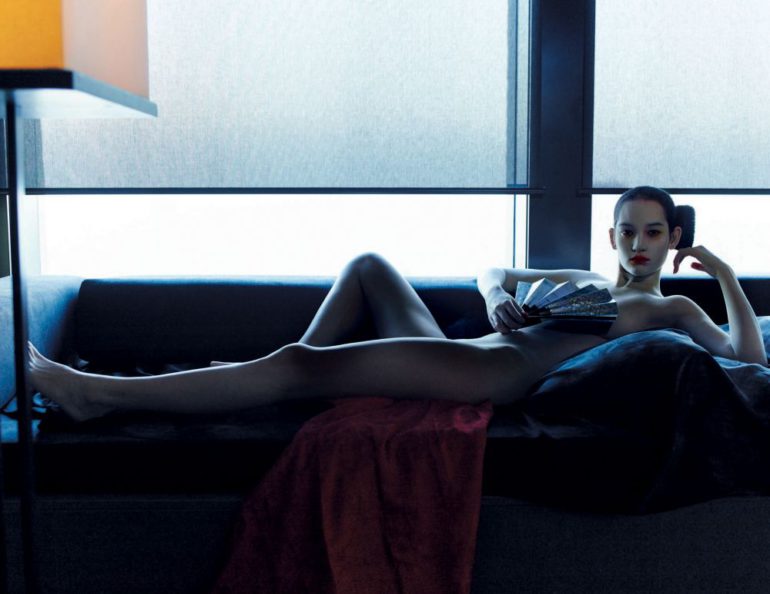 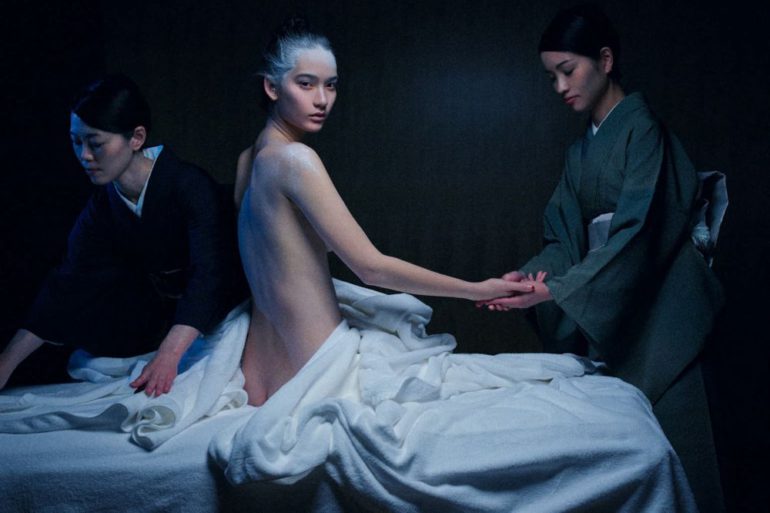 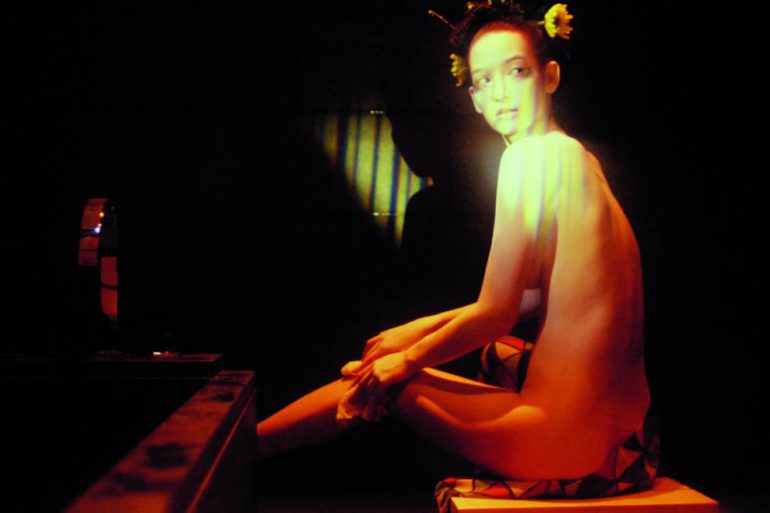 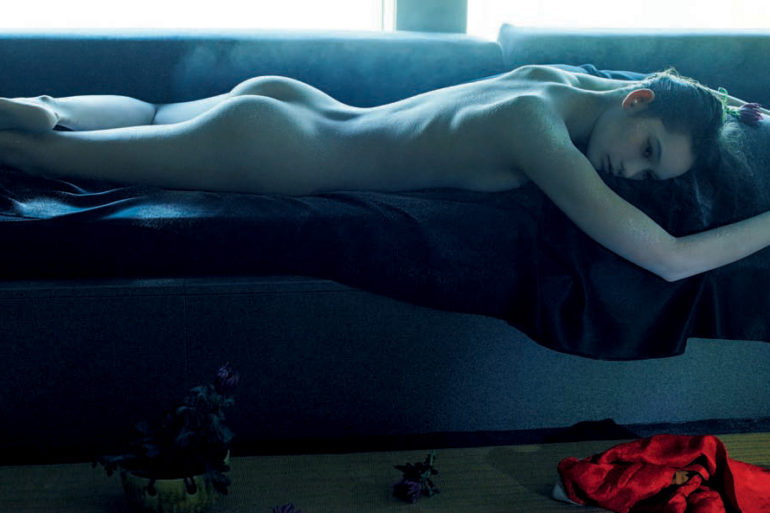 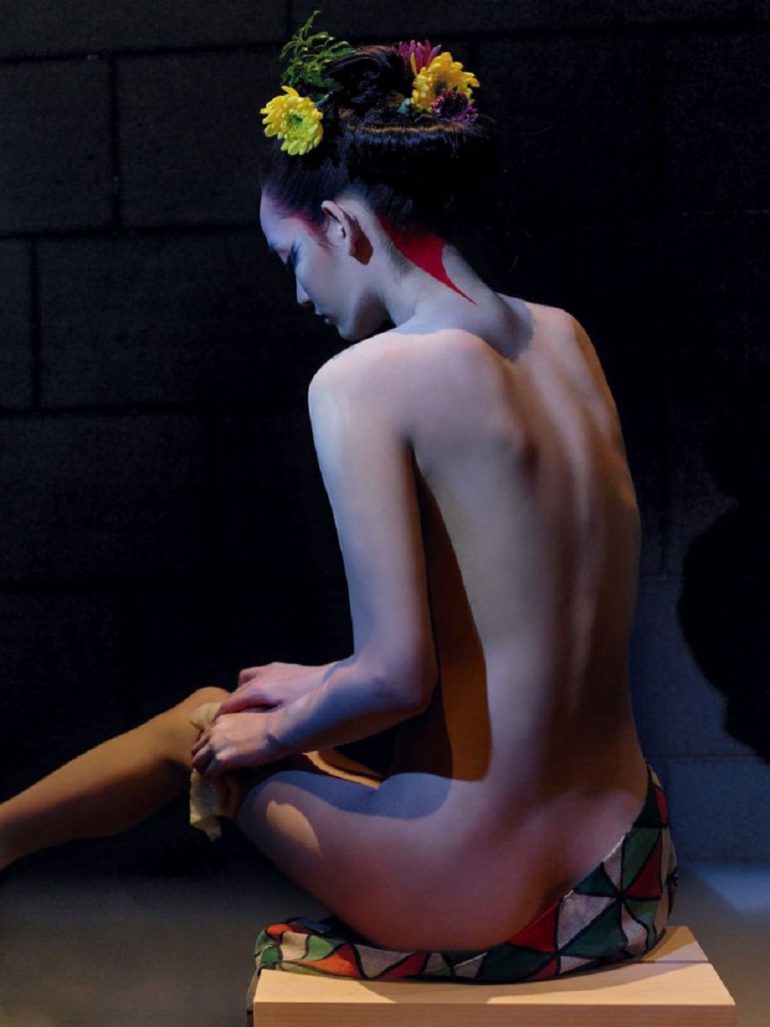 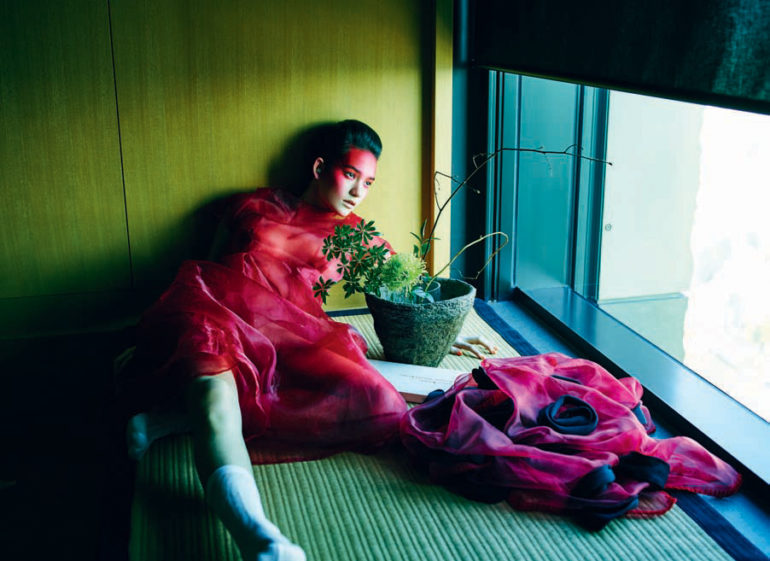 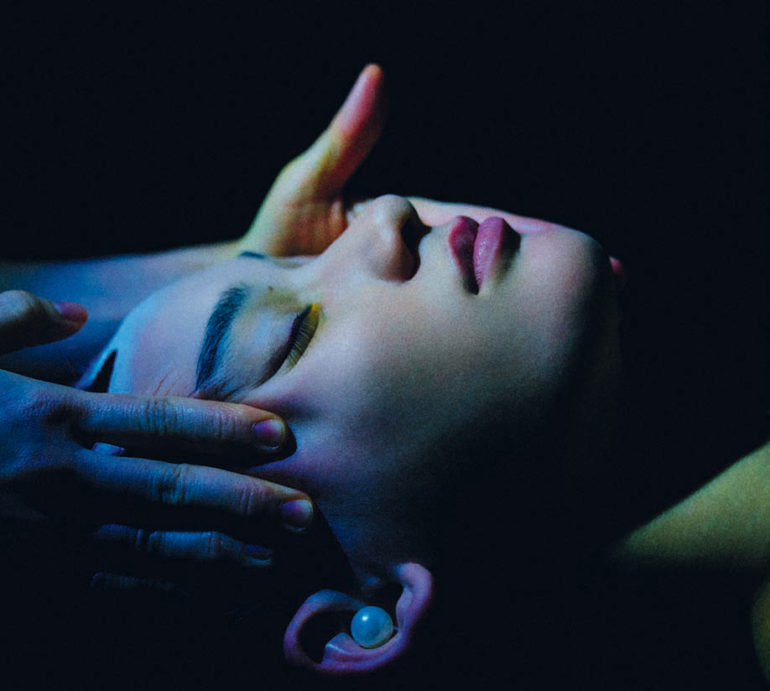 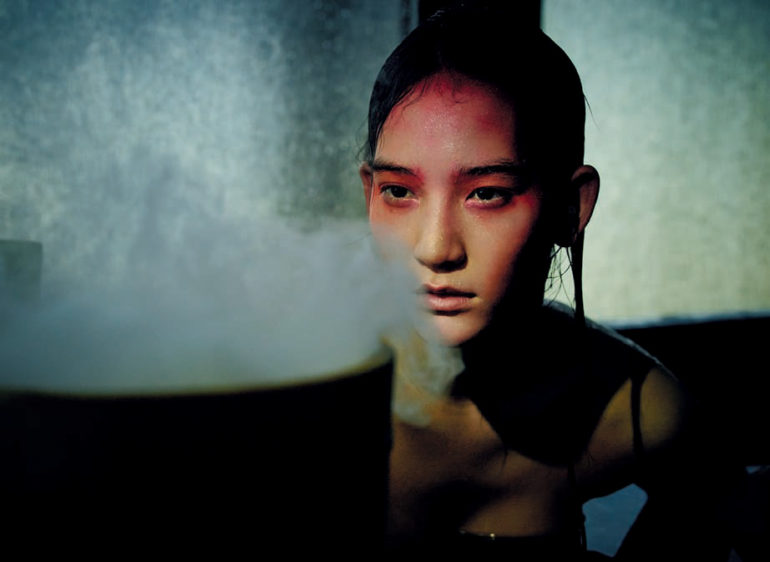 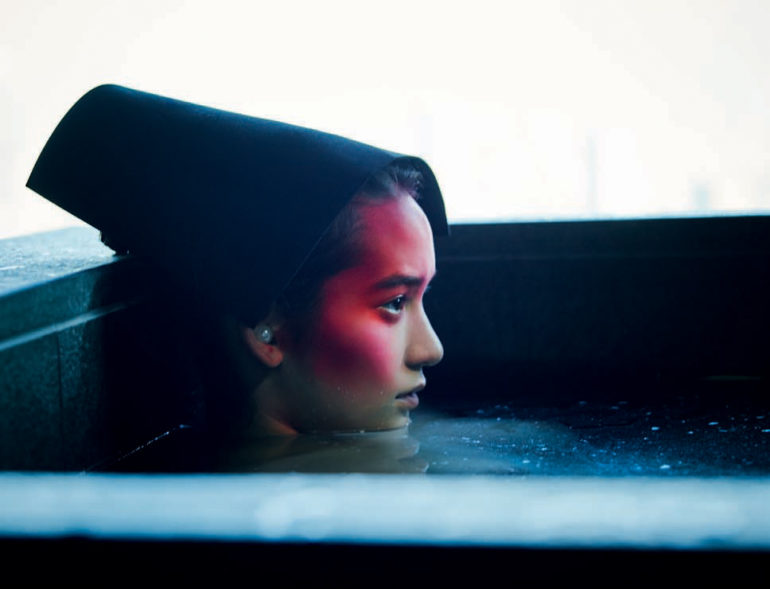 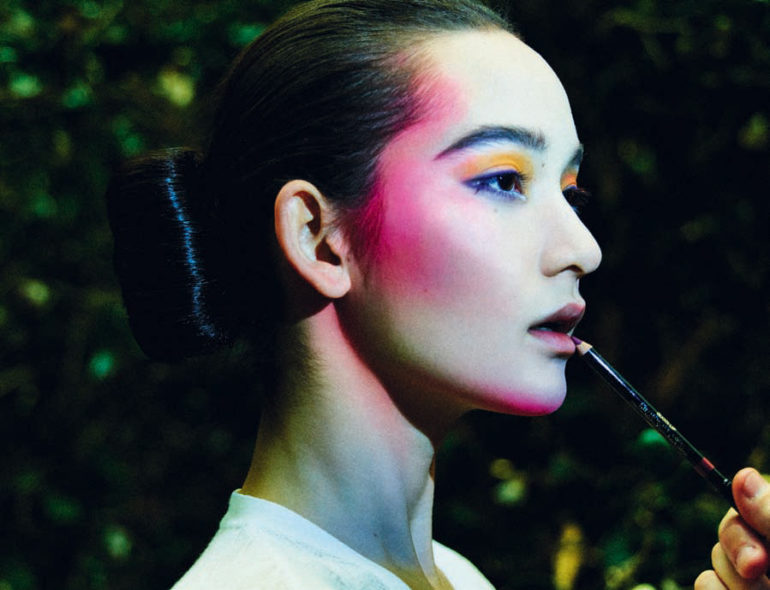 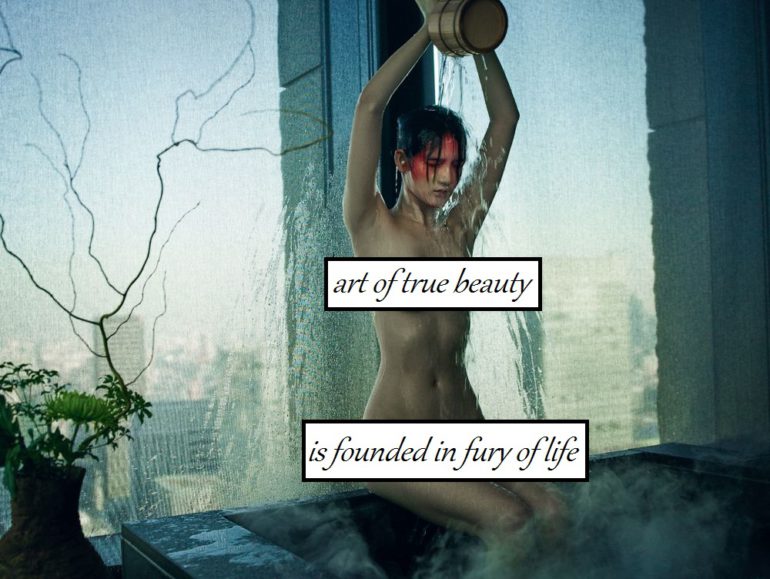 Miles Aldridge Mixes it Up in 'Beauty' Vogue Italia