Karlie Kloss explores the sharpest of contrasts in “A Future Present” captured by Ethan James Green for Vogue Italia, June 2017. A story that celebrates the end of the beginning. This is a compelling look at the possible outcome for our future. Kloss is caught on the baron land of tomorrow dreaming about today. At first we are tricked into believing we are staring at a rich landscape, only to find that it is all in her mind. When the camera pulls back, we realize we’ve been viewing an altered universe. Merely an abstraction, this picture of perfection is a world that’s been constructed to distract. Set inside a baron, brick landscape those around her are all in protective gear to protect them from the elements. At first she’s viewed in front of pictures that portray a different time. When the world was abundant with the fruits of salvation. Now, we see that things have changed. Karlie is covered in a variety of couture that would never betray her surroundings, except for one constant. On her face she wears a combination of eye/head gear, giving the impression it’s not a style statement she’s making. Patti Wilson doesn’t allow the fashion to betray the secrets of her circumstance. Instead, each image is alive with a kind of obscene sense of symmetry. Standing in front of this lush background, it’s hard to remember we are viewing a cinematic construct. What appears like rolling hills of wheat-grass is just an illusion, as the camera takes on unique angles we are presented with a sad truth. Dressed in all white the workers begin to take on a sinister stance. We aren’t sure how she’s gotten here or what the future holds, but we can feel this is a land that destiny has forsaken.

Her drive to survive is so much alive we can feel it break through the black and white film. Not willing to accept the destruction around her, she models with an intention to escape. In one photograph she holds in her hand a batch of fresh daisies, where they came from we can only guess. Gripping those sweet flowers it appears as if she’s going to flee, with a look that borders on sheer madness. Wilson’s style lineup is alternatively absurd and intoxicating. The workers are dressed in head-to-toe white, wearing what looks like nuclear protective gear. Everything we witness is at once artfully unexpected yet supremely disturbing. Running through a synthetic puddle, Kloss splashes the water with a twisted sense of doom. While we can see with our own eyes the darkness that surrounds her, we can’t help but be memorized by the conceptual construct.

By molding her features Kanako Takase gives her a semi-human appearance. Beyond a simple arch, the brow takes on an arrow like shape, giving her a semi-human appearance. Not meant to instill fear, the darkened arch is lifted up into a permanent state, a move that enhances the intensity. Creating a cat-eye mixed with a smokey shadow takes on an otherworldly appeal. Her skin is made shiny and her lips are wet, giving off a just-bitten hue. A look that should equate to clean, but this beauty is instead marked by a hint of emptiness. Like a doll with no emotion, her reactions range from abstract flatness to a curious look that transforms into an altered scowl. By using unique materials to both protect and to project, Shon creates headpieces that give the ensembles a sense of something strange. Standing on there own, each outfit falls into a pantheon of high design, however, when paired with millinery they take on a new meaning. Kloss stuns in a series of stand-out styles, from a simple scarf with a pliable band around the top to a plethora of plastic that’s made to look chic. The crème de la crème of couture captures a giant bubble around the whole of her head. Patti Wilson has her in a one-piece outfit that cinches in, allowing for the arms to slip through the front like a poncho. The combination of this haute, helmet like head-piece and 60’s inspired day dress will leaving you spinning.

The Music of the Mannequin Plays On, as we watch her reach to meet her humanity. Is it too late? As she runs through the open hallways, we are met with a truth that feels nothing like freedom. Here on the baron land of tomorrow we find the fury of today. The workers fill in a few spaces, like gardeners planting on the sparse lands hoping something will sprout. Don’t turn your back, don’t walk away, for what we’re seeing is a picture of a tragic possibility. In an attempt to fight what’s going on, her human side begs to be seen as her soul deigns to reign free. Art is found in the unobstructed view of (wo)mankind. Here we see a future not impossible to imagine. For in a world of alienation it would be easy to find yourself cut off from the truth. And, that which we hold dear, Our Freedom, obliterated. 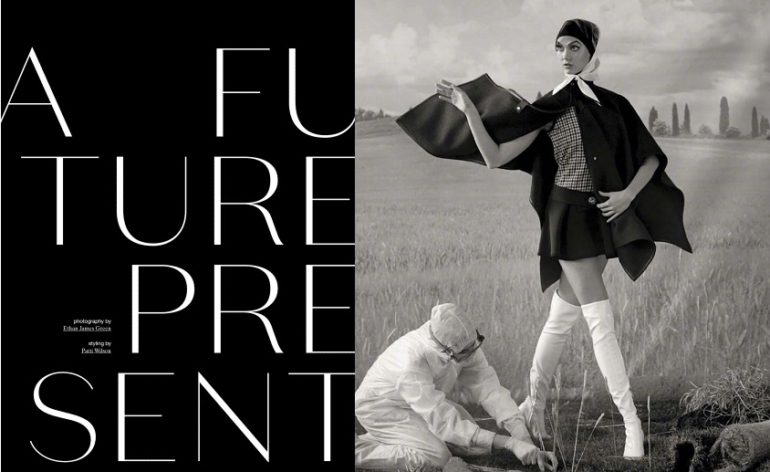 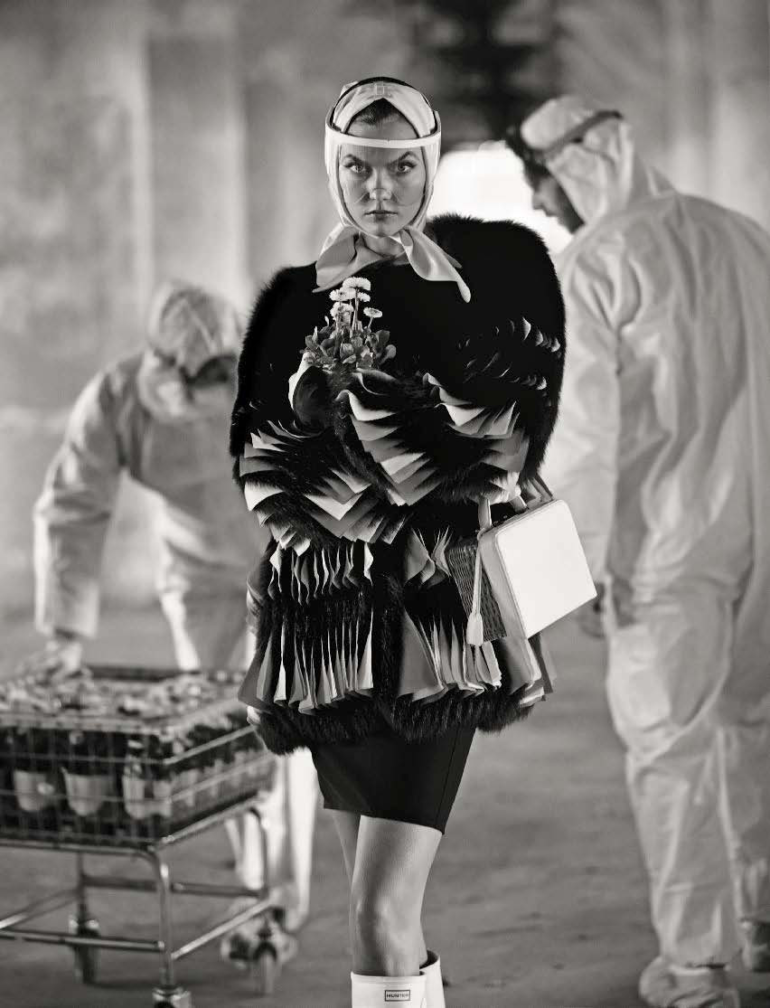 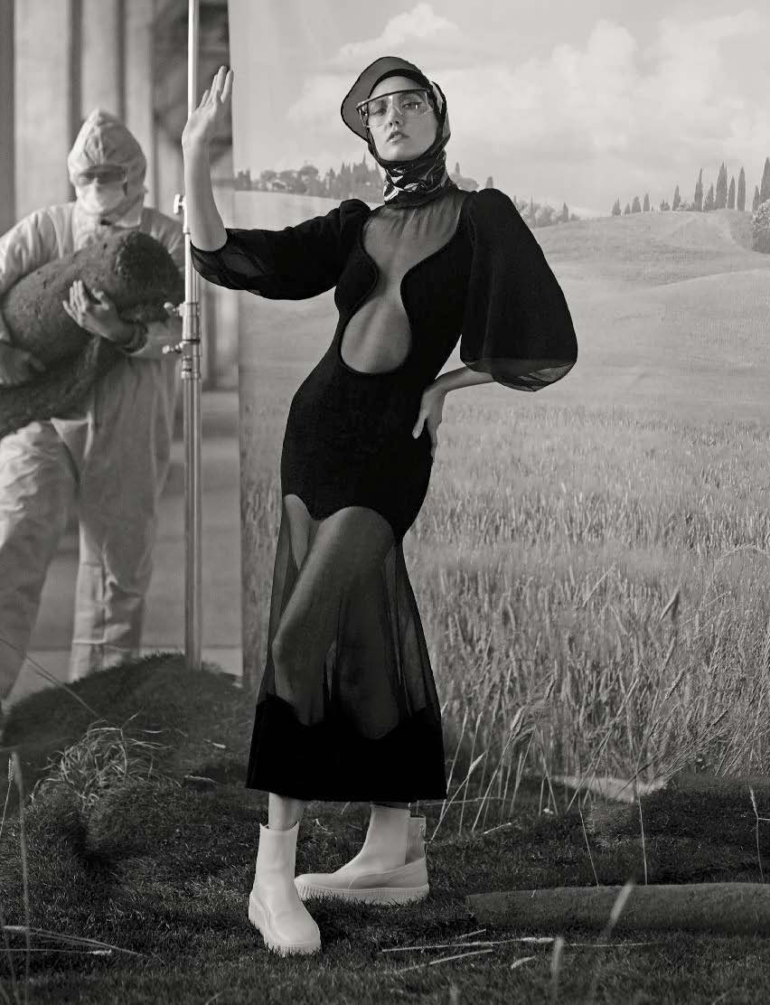 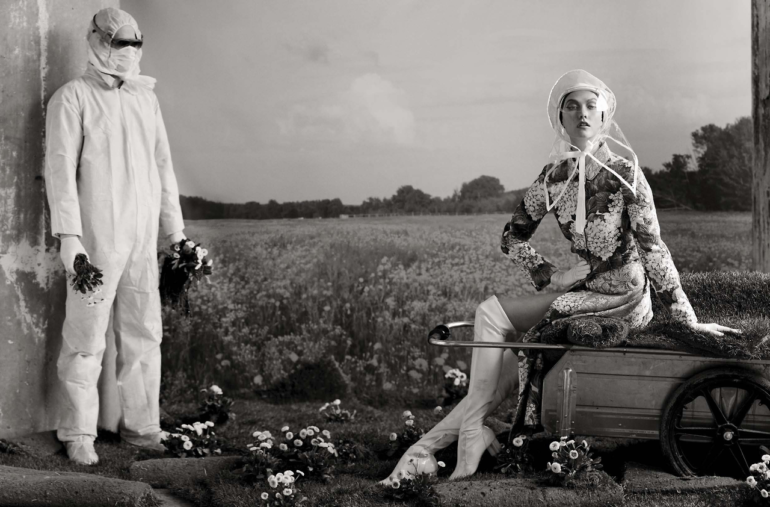 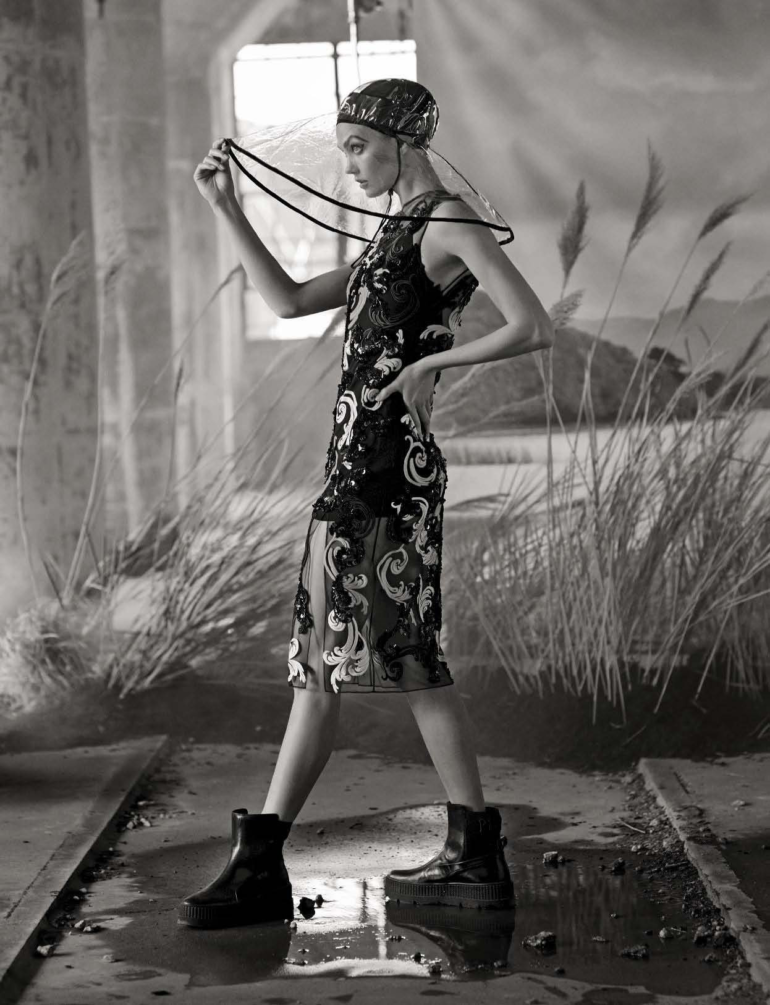 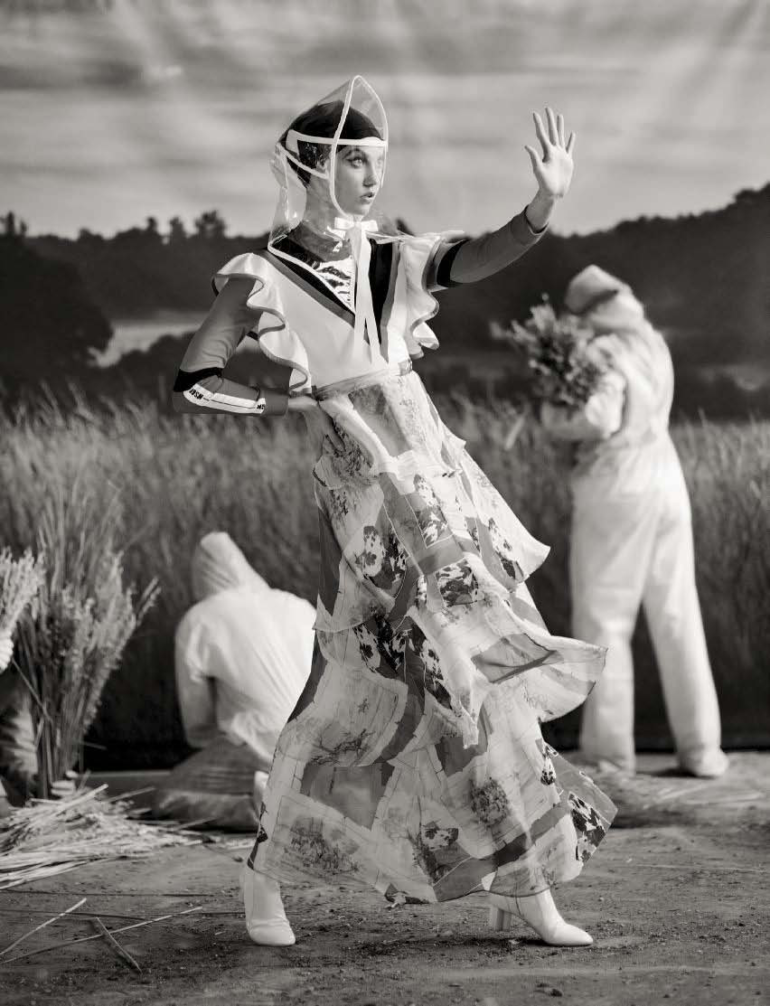 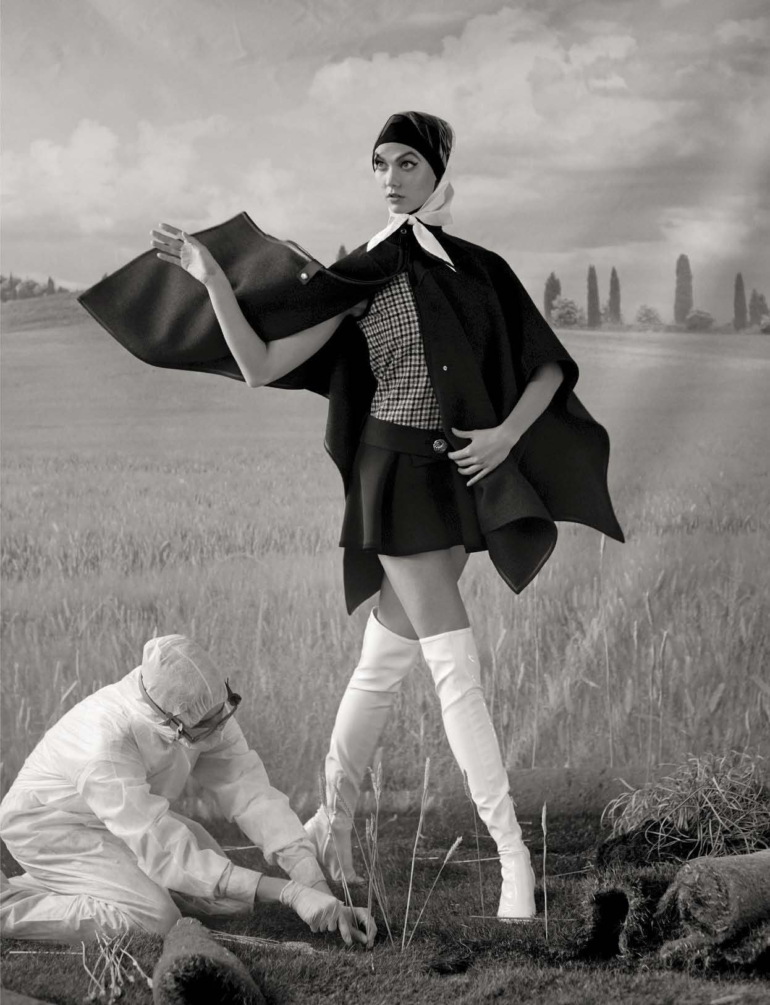 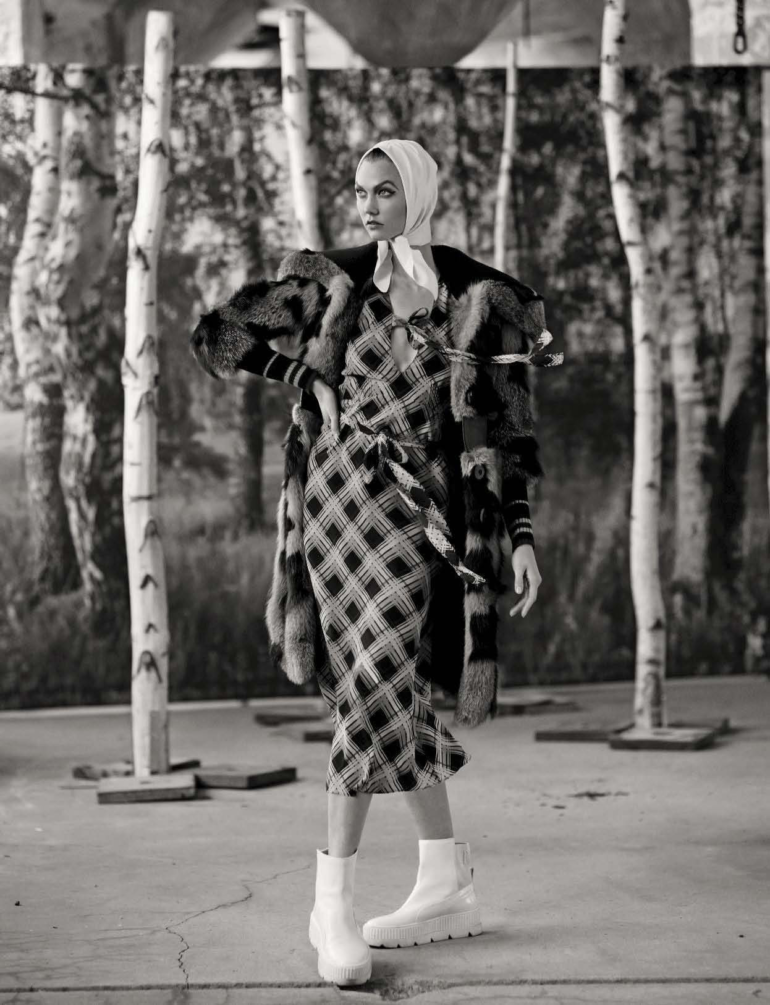 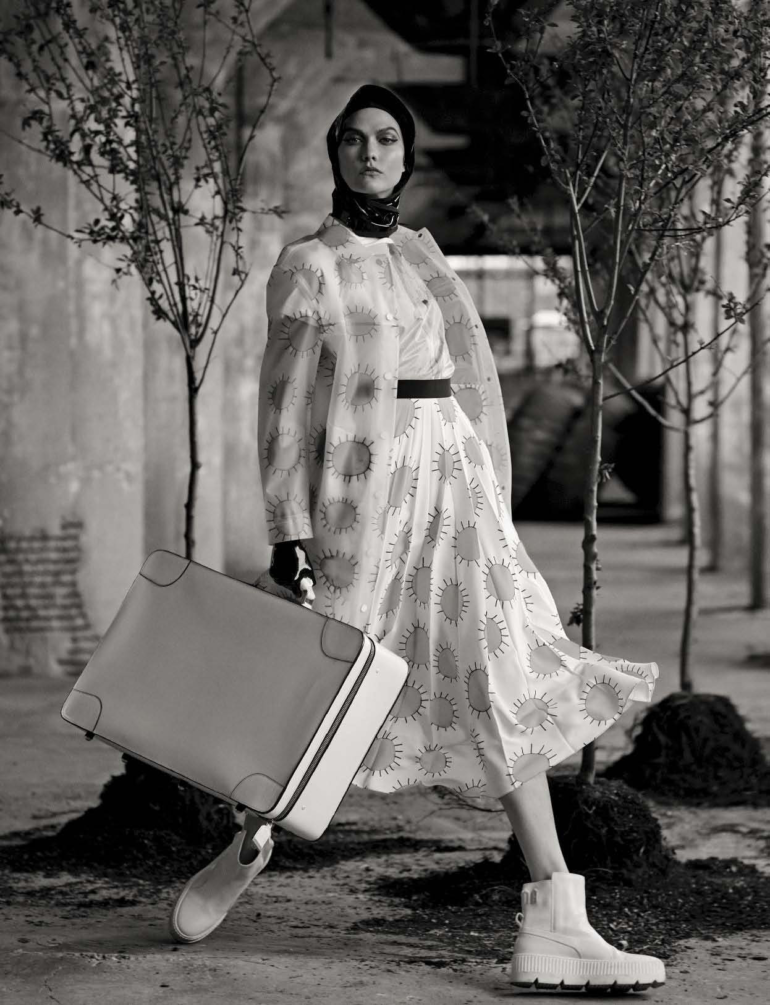 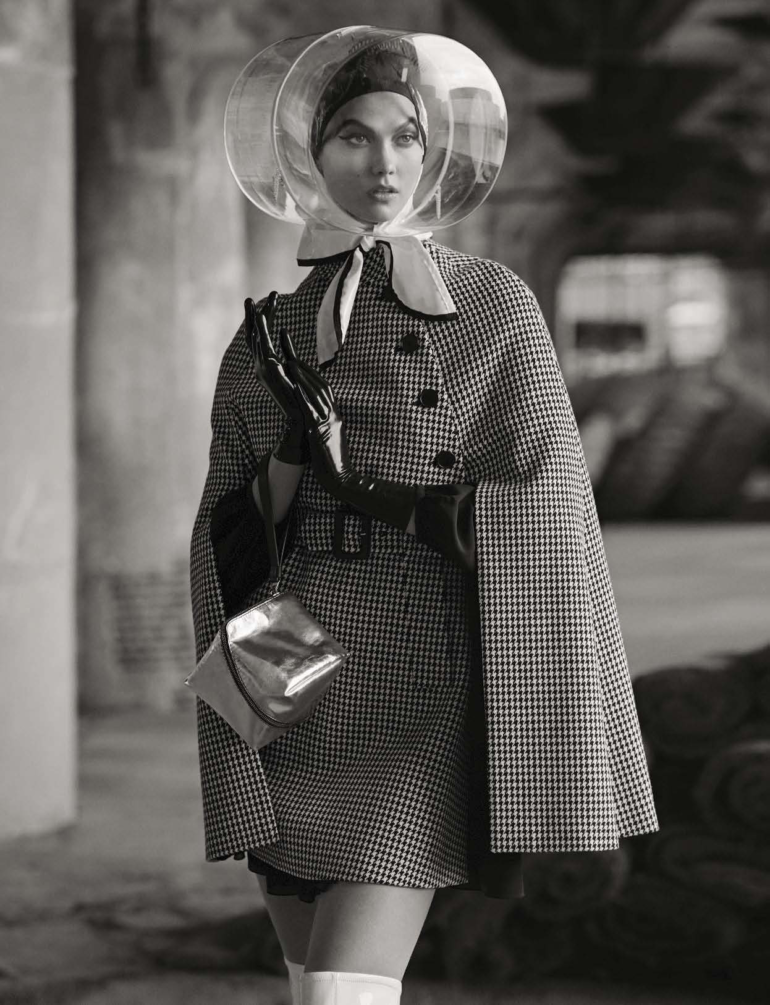 “On the Run” Karlie Kloss is Locked & Layered in Vogue US