Jessica Miller is ready to go and ready to show in “All Night” by Inez & Vinoodh for Love Magazine #18, F/W 2017-18. Often it’s seen that extreme mixtures almost cancel each other out. However here, in the midst of mayhem we stumbled across fashion magic. Panos Yiapanis delivers designs that not only speak about a style selective, they manage to mimic and transcend their own structural lines. The most brilliant form of couture is captured in what I call a haute hodgepodge. That’s to say, what we think we are seeing is nothing more that a pile of clothing, but, to the trained eye they are witnessing the making of pure magic. Jessica devours the decadence with designs that are seeking an escape from the norm. Panos has taken the concept of layering to another level, with piles of styles that reek with opposition. Witchcraft & wizardry mix in fast form spinning and twisting like eyes of the storm. The aesthetic nature of these pieces scream to be seen, as the clash of clothing has only just begun.

True art evokes a strong combination of feelings. This creative selection goes from goth to vintage and country to rock, with a wild variety that doesn’t leave much to the imagination. Bold looks bring in the blend, with big-shouldered blazers that speak to the 80’s and period pieces that appear straight from the prairie. So eclectically grand in scale, one might think we would be left with nothing but a pile of mish/mashed couture. But instead we have a unique mix of eclectic fashions. Like a musical genre that has no business blending with another – these opposites quite certainly attract. It’s not often that we get a chance to witness the rebirth of modernization. But, here we have a true view of era blending. The Victorian era presents an expansive view with bustling skirts that are made of looming lace. Veiled headpieces speak to the drama of the day, while black tulle extends up in a hat like format, as silk spills over the face and falls down the front of the body. Leather and lace never went so deep as graduated Gothic elements are sure to surprise. Pointed booties capture the allure of the late 1800’s, while black, lace tights bring us back to modern times. The poetic intent is masterfully met as the vision of innocence is clearly vanquished.

Avant-garde eyes make an appearance, as Yadim opens our minds to the mysteries of Gothic inspired makeup. Couture is chaotic as cosmetics are extreme. In place of plain pretty we find ourselves in search of something new. Taking advantage of Millers’s linear face shape, every application gets a new view. The lower lines are done in black, making them appear even wider than they naturally are. Her palate proper is given a powdery makeover, ensuring the makeup moves ever closer to the edge. While, the lips are done in a frightful white, exposing the darkness that reigns below. Showing like a magenta mask, the deepened hue surrounds the orbital field, looking like almond eyes made of fire. Alternative sources advance the application technique, with otherworldly elements that excite the senses. Shadows transform as the story progresses allowing each image to ignite the page. The deep saturation of pink passing up the front and over her forehead, mimicked in kind on the tips of the fingers. Ward Stegerhoek parts her dark hair down the middle, creating stick-straight locks that fall down the front. This all moves toward an aggressive end. A gem covered Jessica stands with her head tilted back, as a herringbone jacket sprouts out of the tiara marked with saturated stones. The magenta masque has migrated into a permanent position, as a dark line has moved into place taking it’s position over the orbital space. Scary yet seductive, we stare in awe as we imagine her brows are black wings set to take flight. The look is ominous yet intoxicating ~ leaving us with one final treat ~ as her haute mouth is filled with blackened teeth. Inez & Vinoodh erupt from collective contemplation as they click forth into oblivion… Gothic Magic from the Witching Hour to the Edge of Darkness. 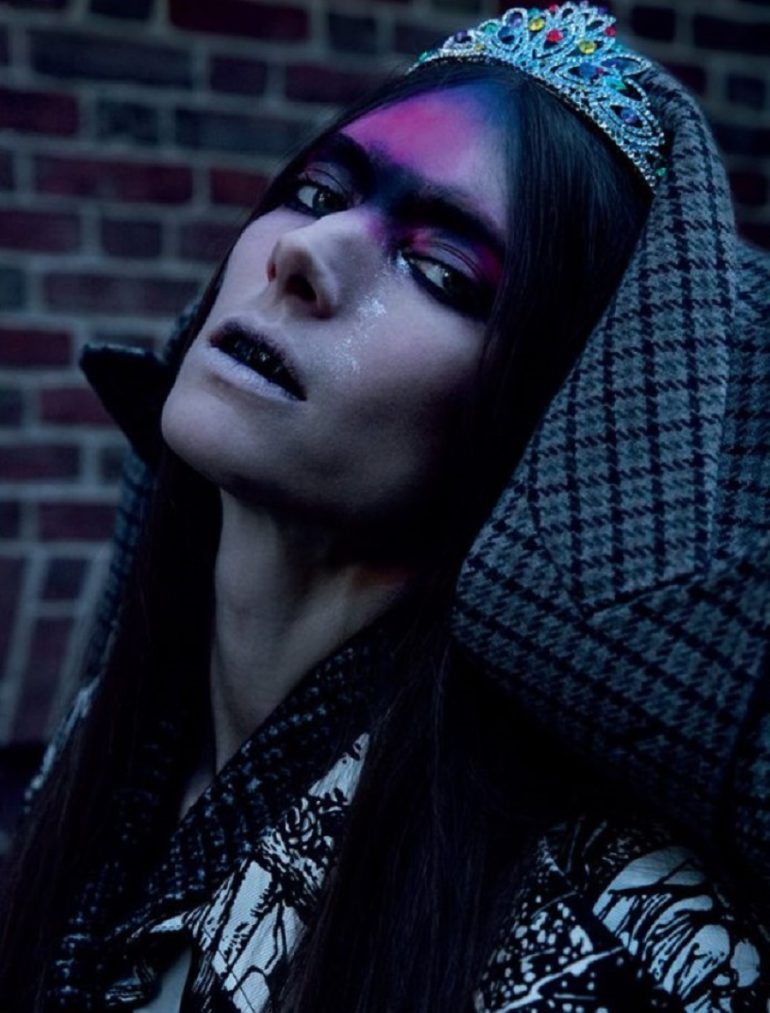 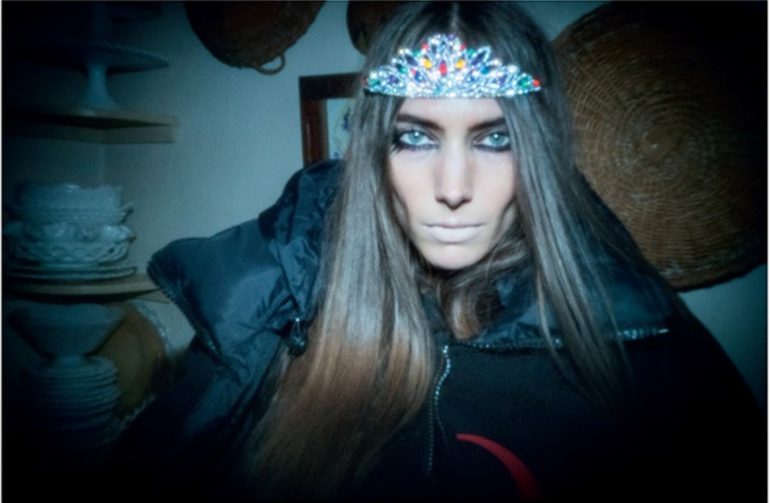 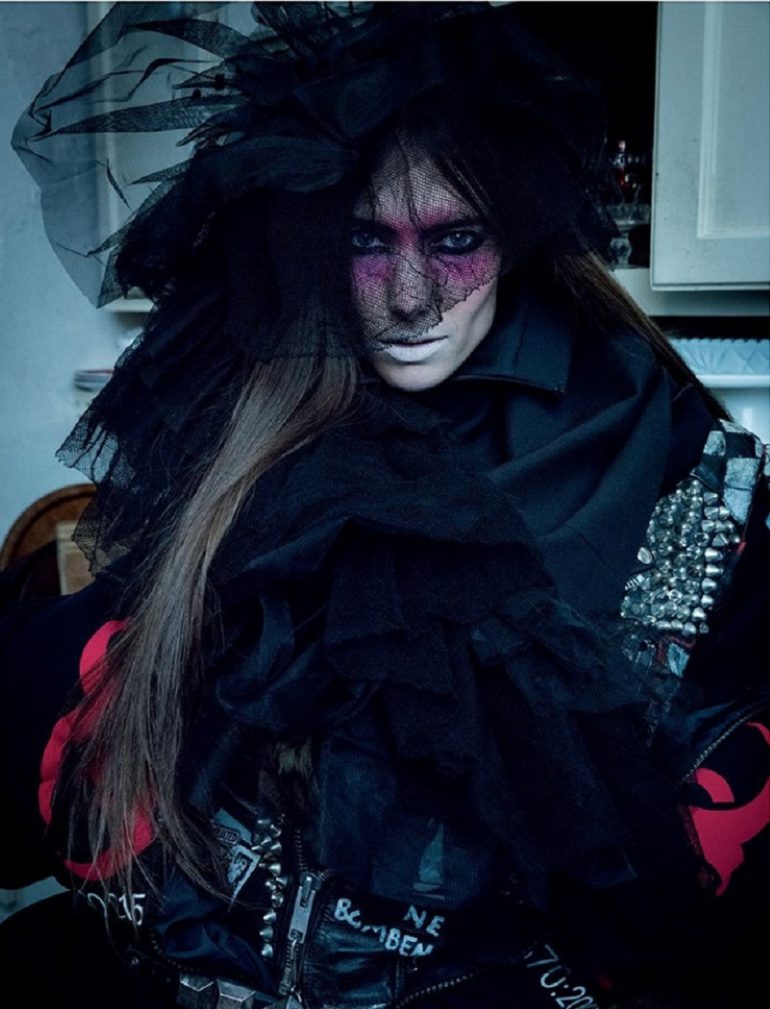 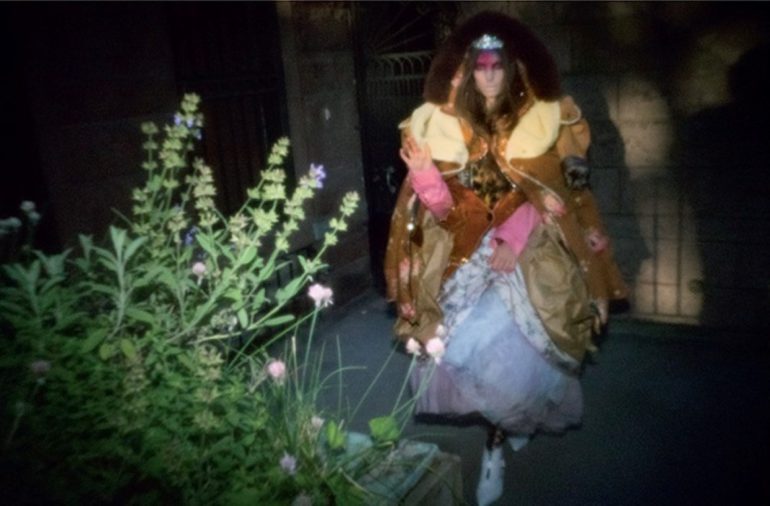 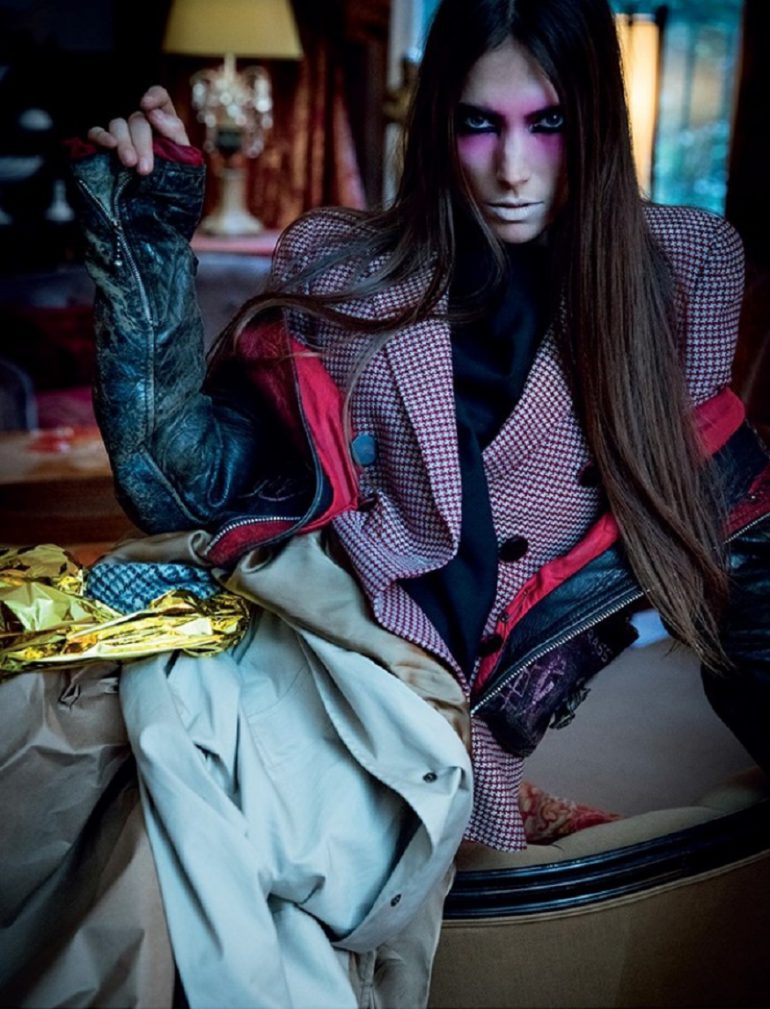 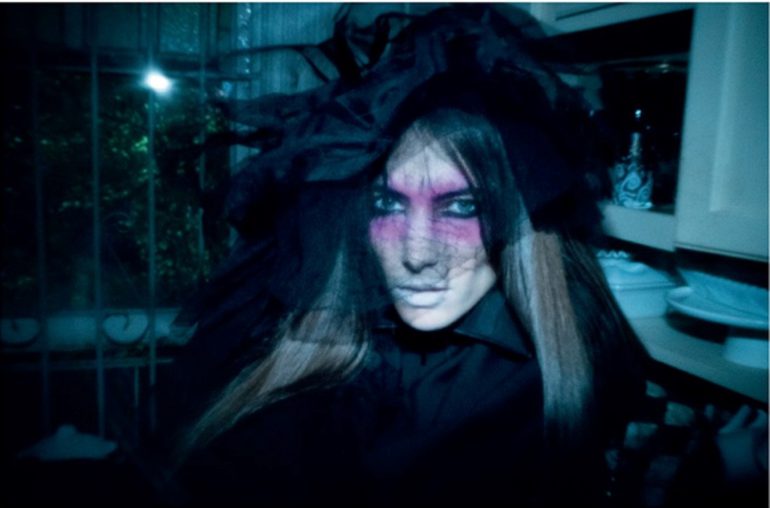 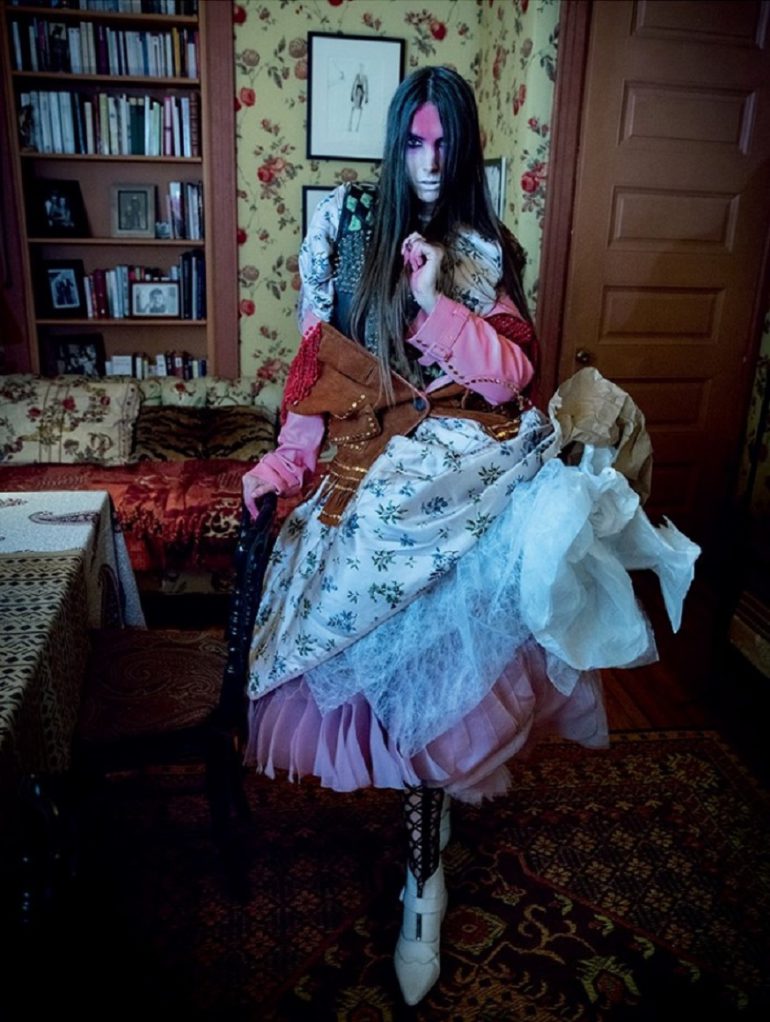 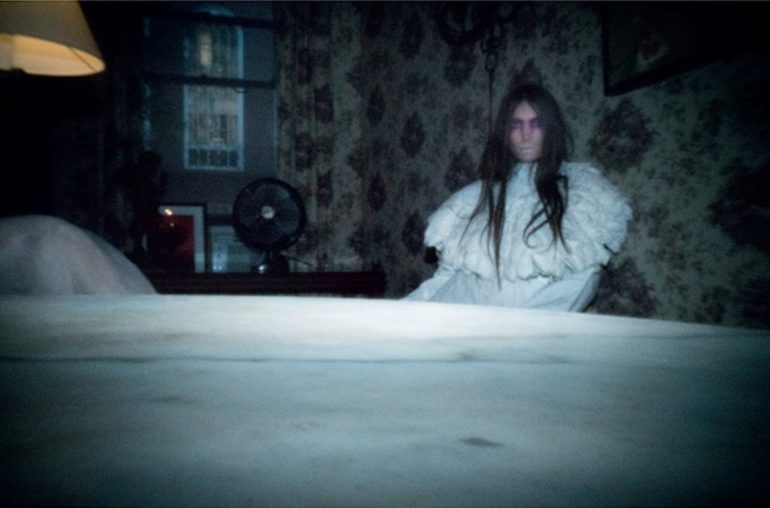 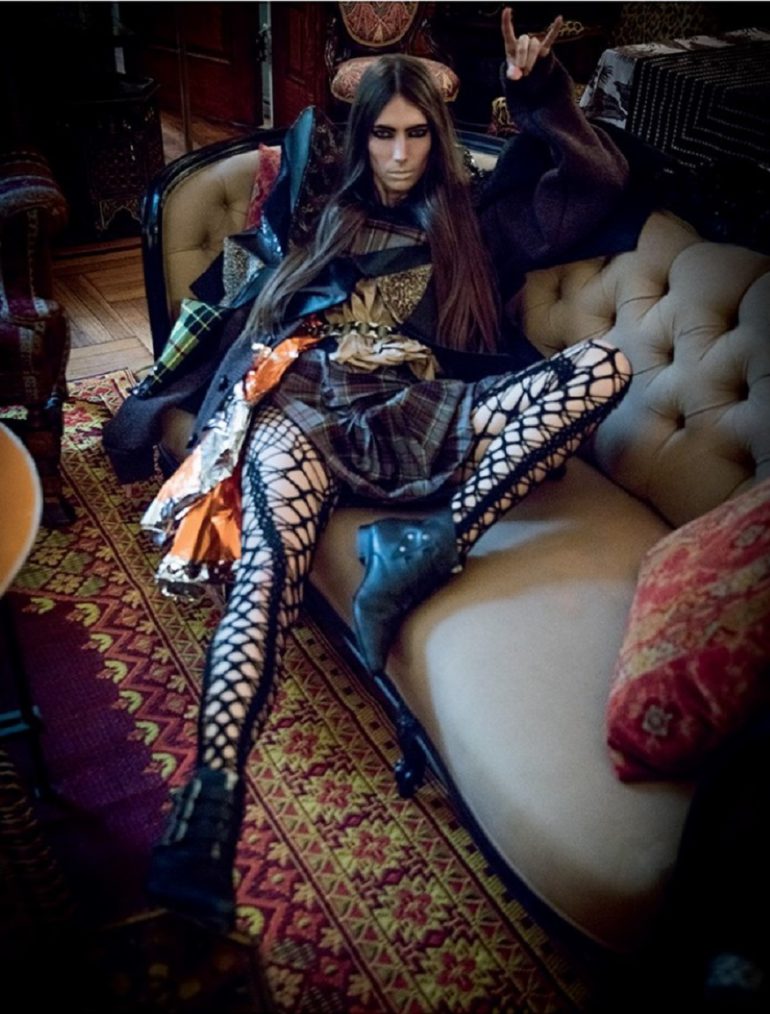 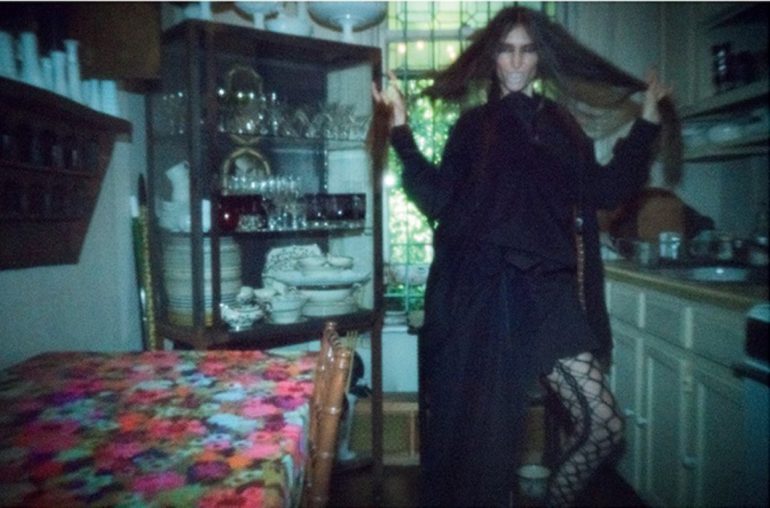 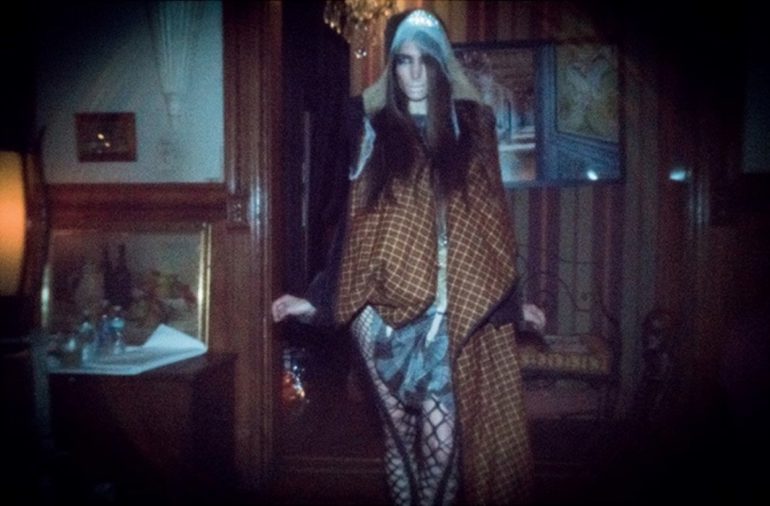 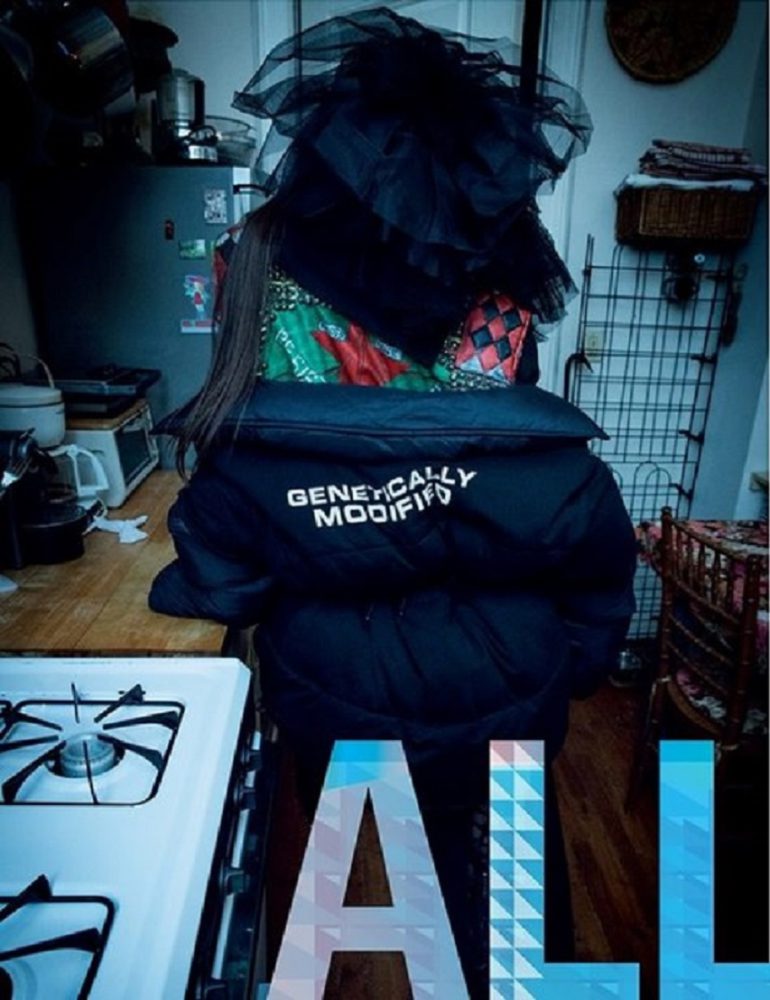 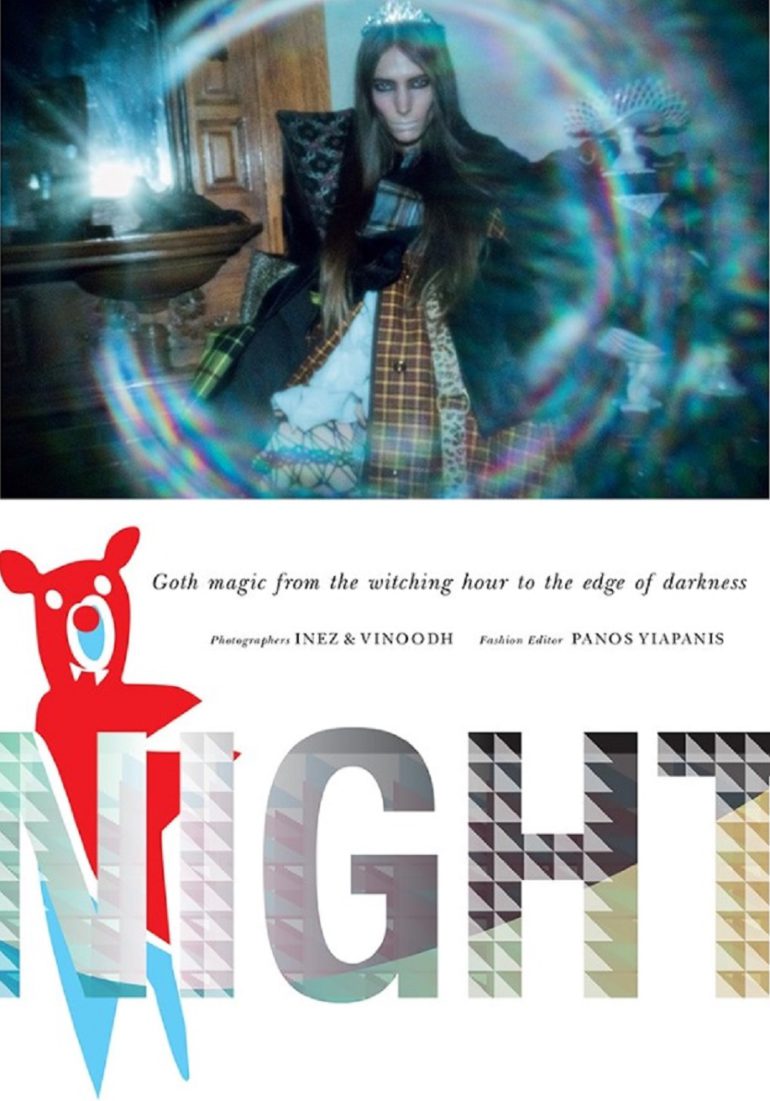 Jessica Clark “Owns the Night” in Sheer for Amica Magazine