Katy Perry future trips from another planet in “Listen Up!” shot by Steven Klein for W Magazine, The Special Collector’s Issue, 09/17. Paris lights up the scene set inside this neon dream. The frenetic pace of this story reads like a city under siege. This editorial is less about a famous name and more about a visual escape. Klein cuts no corners as he takes on this fast-paced tale with a filmic edge. We watch as the Eiffel Tower glows against the defining French backdrop. A Grand Farewell… this spectacle plays like fireworks in the sky, as we say good-bye to the great, Edward Eninnful. His talents are taking him away, as he heads off to become, Editor-in-Chief of British Vogue. Perry plays an alien creature that has the power to project her inner feelings across her forehead.

Enninful invites us on a future trip through the city of lights. Seen from a unique vantage point, Klein takes care to capture a variety of views. Like traveling toward an unknown end, we arrive at the place where the sender doth began. A tortured tale of love and other yearnings, Perry plays a future bot that finds herself unprotected from the powers of love. Drama defines the story-line, as the fast paced cuts give us a feeling of adventure. Long distance love rings true no matter your planet, Klein gets us with one of the oldest stories in the book. This alien creature takes on a human form, wearing Katy like a coat. Quickly adapting she finds herself donning a variety of slick, new styles. This couture covered creature hits the page chasing her lover in a riotous rage. Futuristic looks capture the tone and tenor of this fierce piece, as the streets lights ignite leaving Perry to tear through the city with one thing on her mind. A picture of pure poetry is seen as a boy’s image floats behind her. The only picture in which we see the object of Katy’s affection. Like a thought being formed we begin to feel the pain of her loss. Standing strong, light spills over her skin as the Eiffel Tower power glows from within. This plays like a large scale performance piece. And, while most of this story is done in digital format, the conceptual notion is still one that’s highly artistic.

Makeup Maestro, Yadim, turns her features to on, capturing the subtle nuances that exist between digital and reality. His remarkable ability blends the now and then allowing us to see her humanity. Working as a benchmark of time, beauty beckons on high reigning on down from her house in the sky. Uncanny imagery invites us to see through the eyes of tomorrow we can witness the hope of today. Raw emotions expose the truth as Yadim uses her lips like a bleeding heart. Bright, blue eyes pop against her pale palor, leaving her red mouth to stand out. Shay Ashual highlights Katy’s new dew, treating almost as if it were a shaved head. Bleached on top, her buzzed hair lets her dark brows steal the show. This story explores the outer reaches of the imagination, as it trips toward the digital end. Streaming across skin like a digital dream her thoughts are portrayed like film on a screen. Pictures project over her forehead filling it with personal images. Flying across the neon sky the moon is gone in a blink of an eye ~ from the headlights to street signs the glow floods the city. 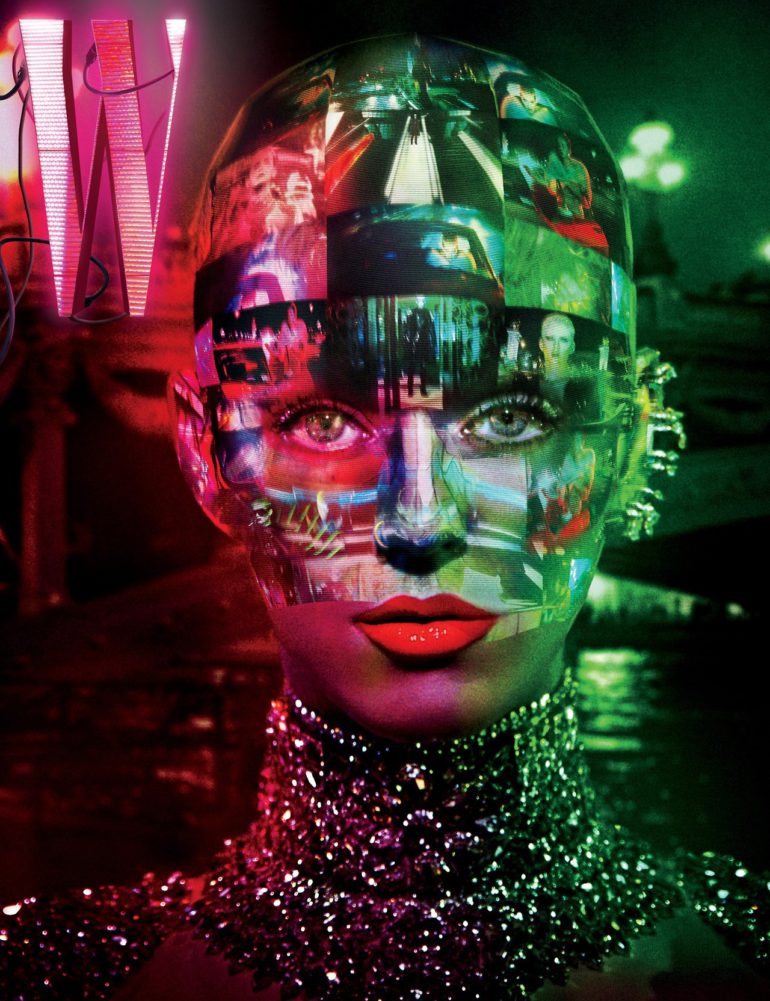 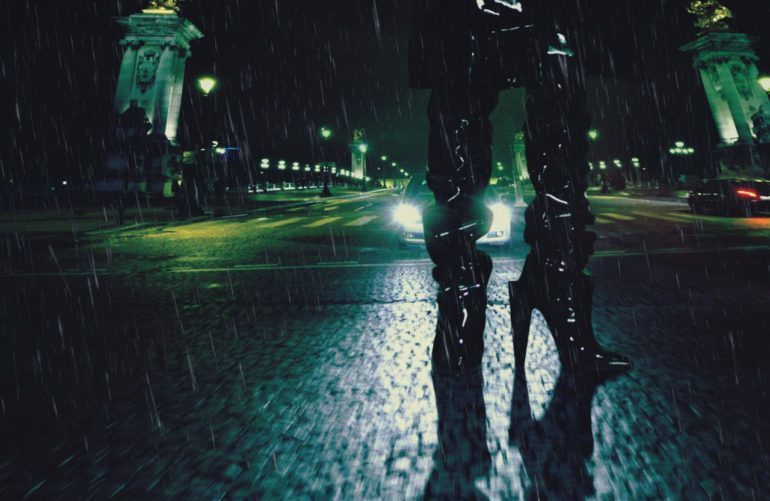 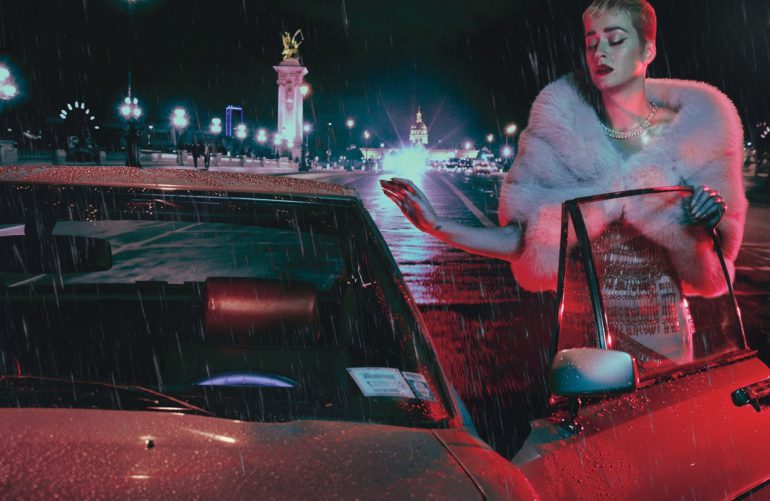 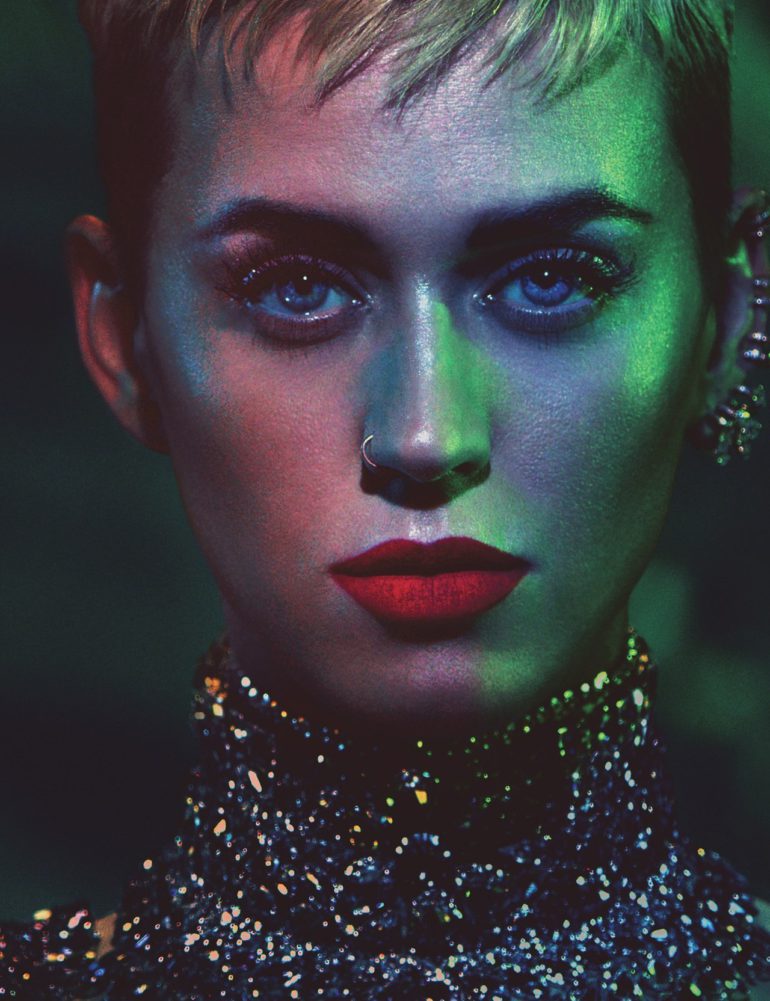 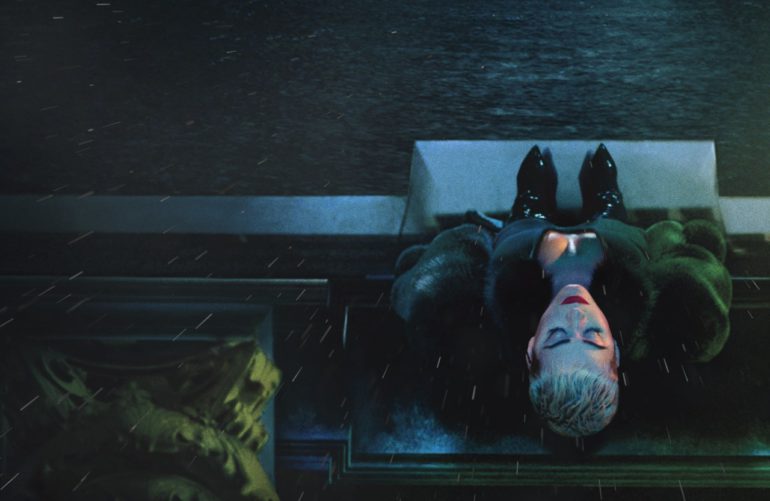 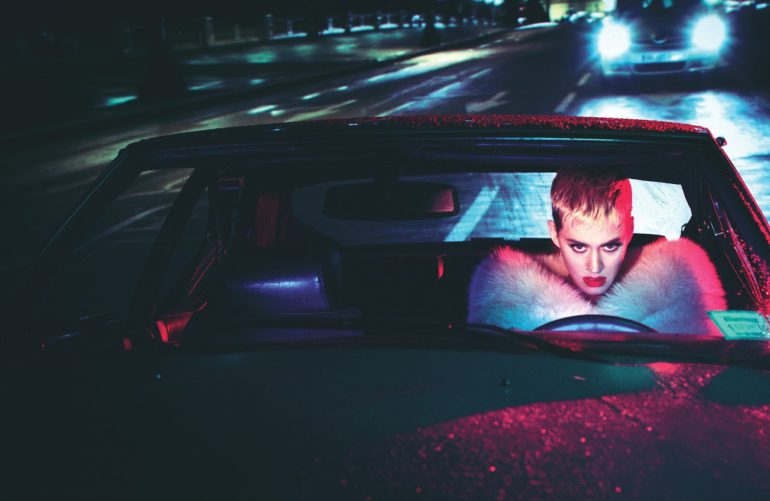 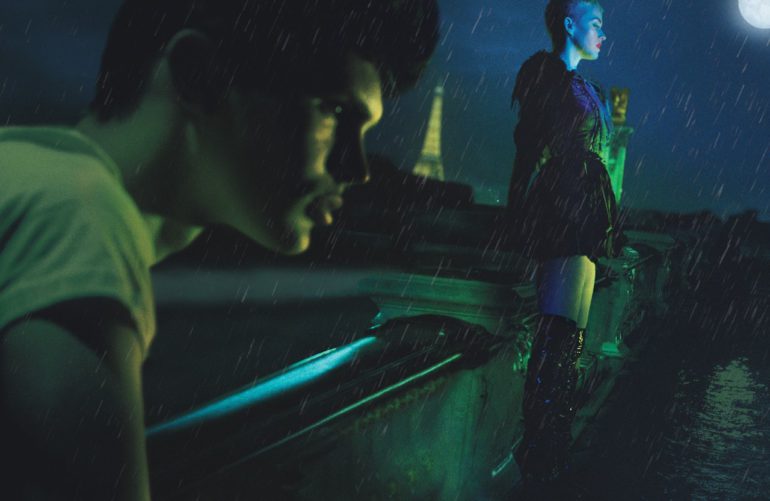 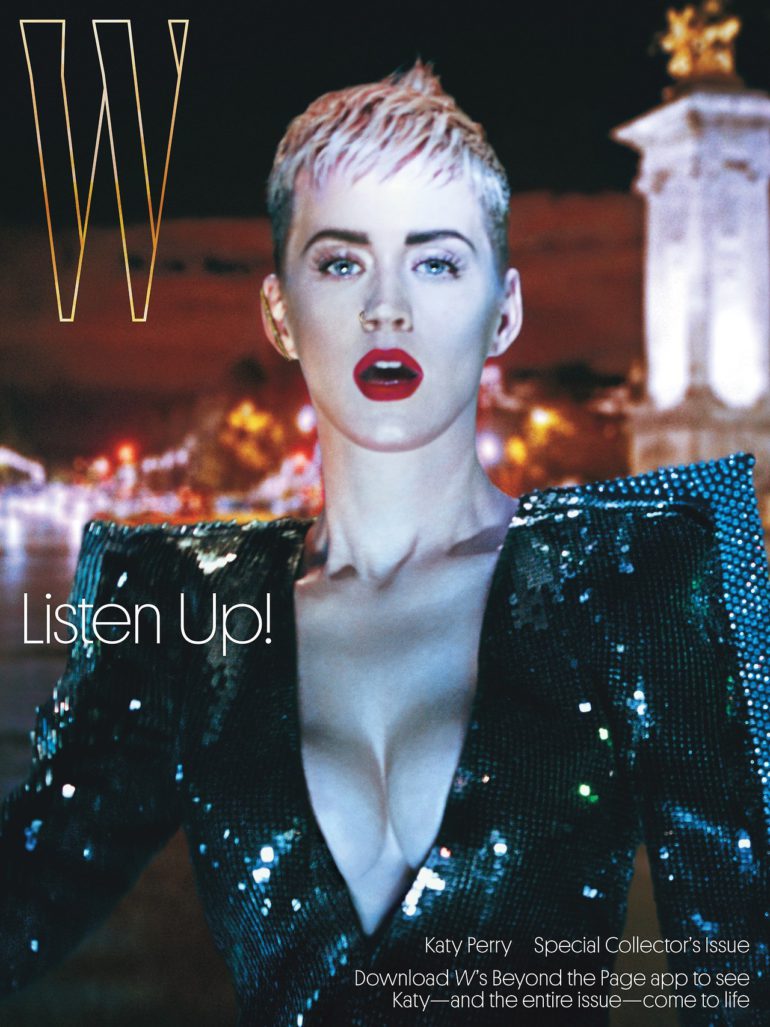 A Daring Piece of Fashion Melodrama by Steven Klein