Lucie Stoll stars in the theatre of change by Armin Morbach for Tush Magazine, F/W 2017. Costumed cosmetics takes fantasy to another level as we fall down the rabbit hole of haute couture. Each image stands independently, strangely blending into the buffet of beauty. The search for originality continues as we make our way down the pathway of plenty. Distinct dimensions propose contrasting elements to effect the search boundary, as opposition arises allowing them to be both passive and playful. Close your eyes and you will see an abstract notion from a to z. Shots stand independent yet are oddly synchronized. Pictures play like theatrical events longing to be expressed, within each frame there’s a world of wonder placed over the face. Nina Petters uses a variety of patent leather & shiny silk to amp up the backdrop, while yellow material is made to look like ruffled fabric flowing. Like a Show Within a Show… you will see avant-garde artistry ready to blow.

Boundary breaking beauty blasts off as Topolino creates each face to be free. That’s to say, when we set off to explore new worlds we must first free our minds from any preconceived notions. As nothing impedes our pathway to progress more than judgement lurking in quiet corners. Pop culture explodes as we see this phenomenon of avant-garde wonder unfold. Starting with soot, Lucie’s skin is covered in a charcoal film, with every pore being erased by a thick application of midnight black. And then we shift. Primed to perfection, baby pink speaks as the mouth shape is drawn outside the natural lip line. The result is dramatic, as darkness is touched with a tinge of decadence, allowing the exact opposite the attract. Her bouffant bump mimics a modern day barbie doll, with a big bow to match. A blush tone takes over the skin, drowning her dew and covering the entire backdrop. The duality is dynamic ~ as a black line follows form surrounding the lip line just like before.

A plethora of pageantry rides like a float gliding down a parade. Evocative, provocative, powerful and real… each image projects a sense of spirit while tenderly inviting us inside. Primary colors pop off the page erupting in a riotous rage. Like a modern interpretation of a circus clown, Stoll embraces strange beauty, allowing her features to fly. This celebrates the idea of innovation by taking clever concepts to the next level. Face shapes are sketched on the skin with a sharpie, bending the abstract notion as far as it will go. Pink & black are drawn to look like half-moons hanging over the brows, while red makes a perfect circle, artfully covering the whole of the mouth. Mustafa Yanaz deigns to create an extension of the presentation, by using colorful foam pieces, made to look like hair. A pastel punch takes it’s place with random letters marked over her face. The symbolism of this look exceeds the learned curve, as Yanaz tops it off with a wig done with beaded letters. A cast of bright colors come together making this picture the cheeriest of the bunch. Spikes of silver stand on end like clay being cast in every direction, while, a giant sized beehive teeters on high as it stretches out toward the sky.

Topolino continues his creative bend, with applied materials that make the features appear to be sewn on. Pieces of thread are placed over the mouth, as a needle is driven through the lower lip, giving it the illusion of being attached. Creative appliqué shows masterful detailing, as one eye is done while the other has just begun. Freddie Kruger Couture has it’s moment to shine, with shots that show zippers connected in a masqued like effect. By covering the entire head/neck in a whipped like cream, he then creates a face with blue glitter for the eyes and red sequins for the lips. Lucie’s face becomes one with the sun as her eyes roll back signifying eternal salvation. She calls to the earth from the sky up above, yearning to live… longing to love. Embracing the “Extreme” energy of this editorial plays like a live art installation. Multi-dimensional imagery moves beyond the flat paneled pictures of the past, taking us into the Face of the Future. 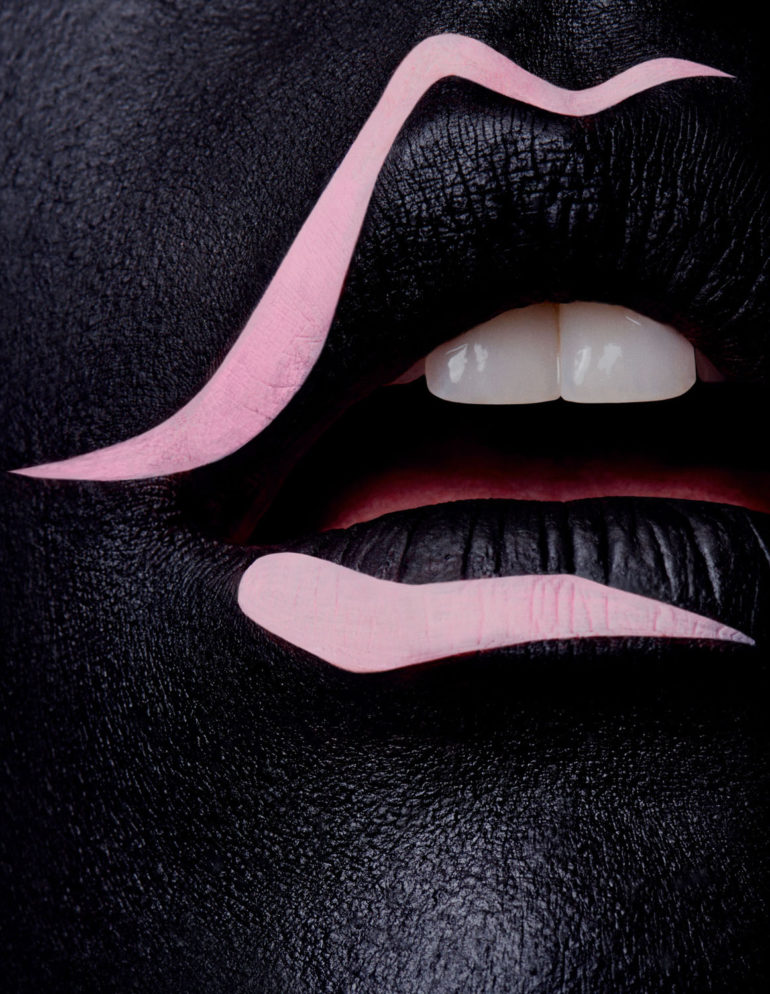 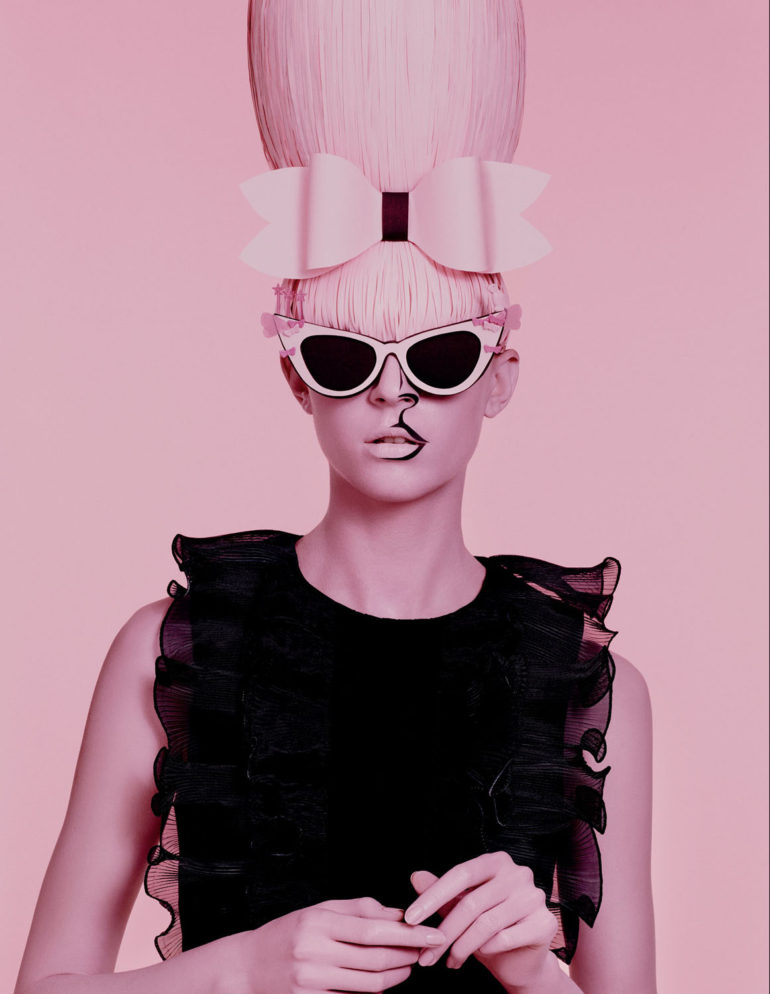 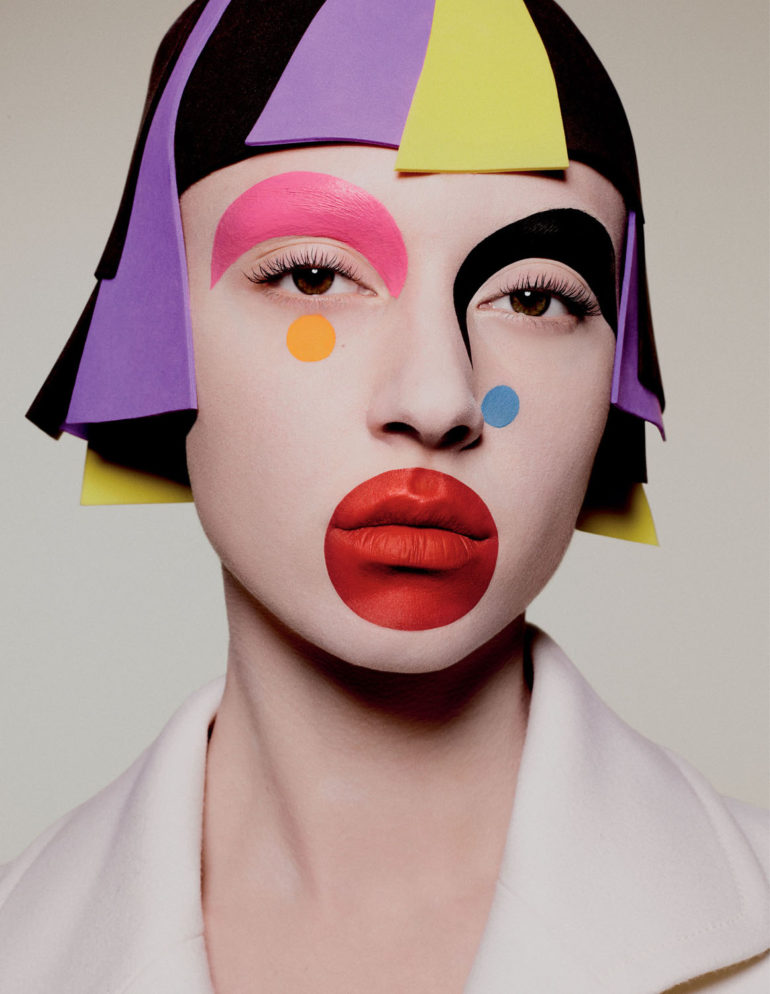 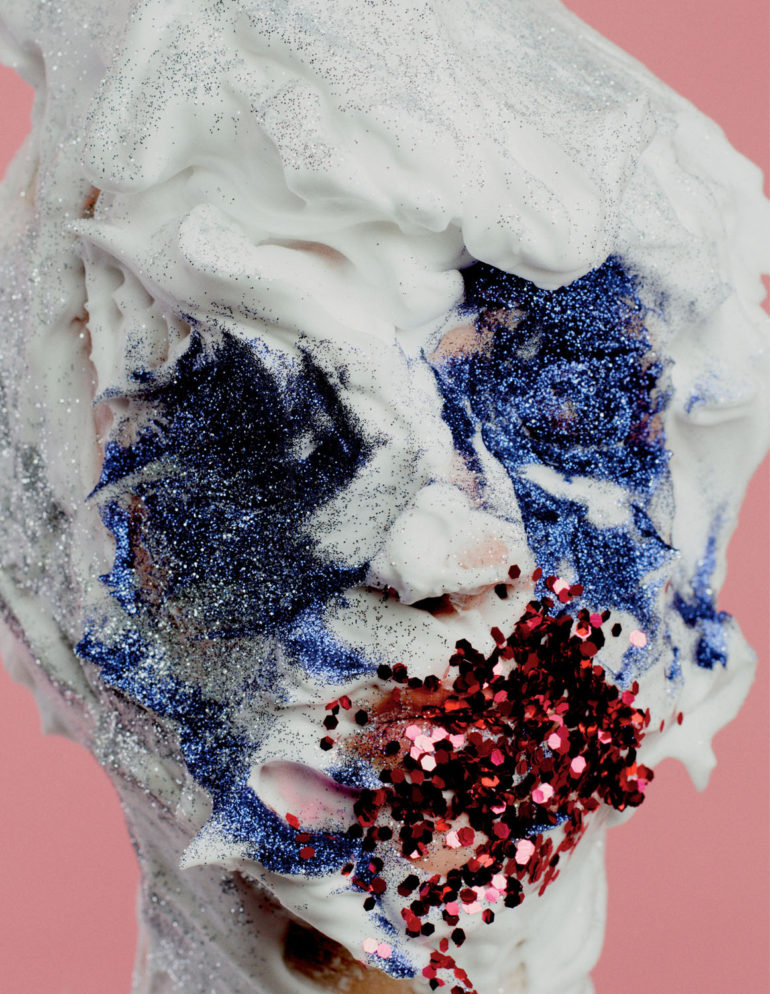 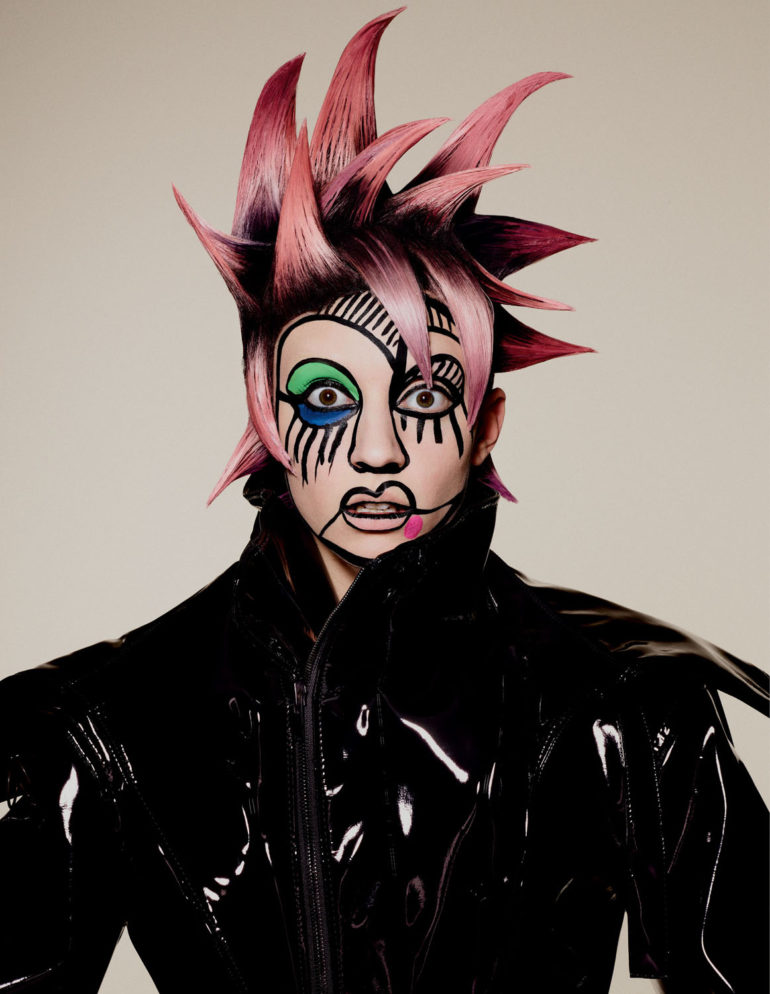 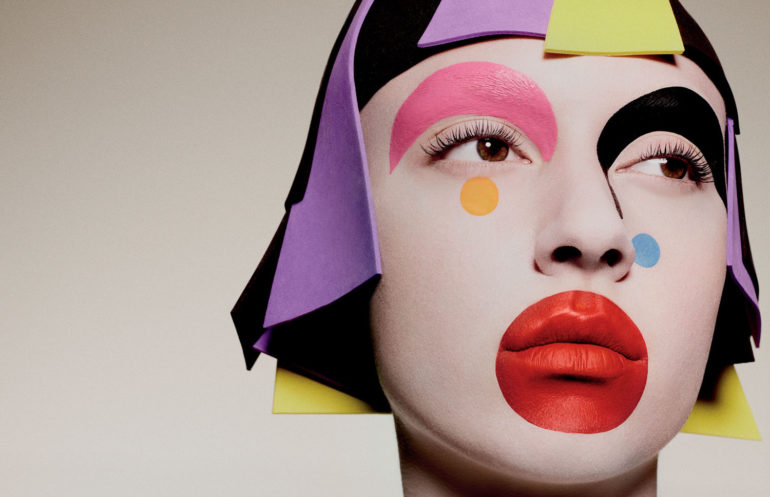 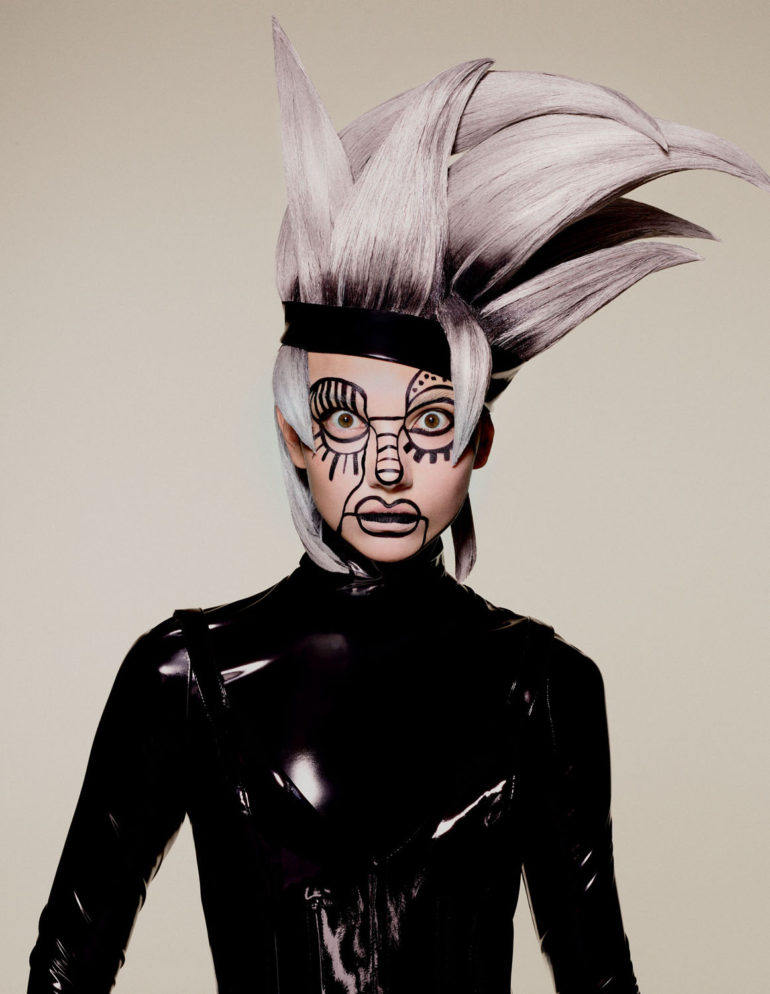 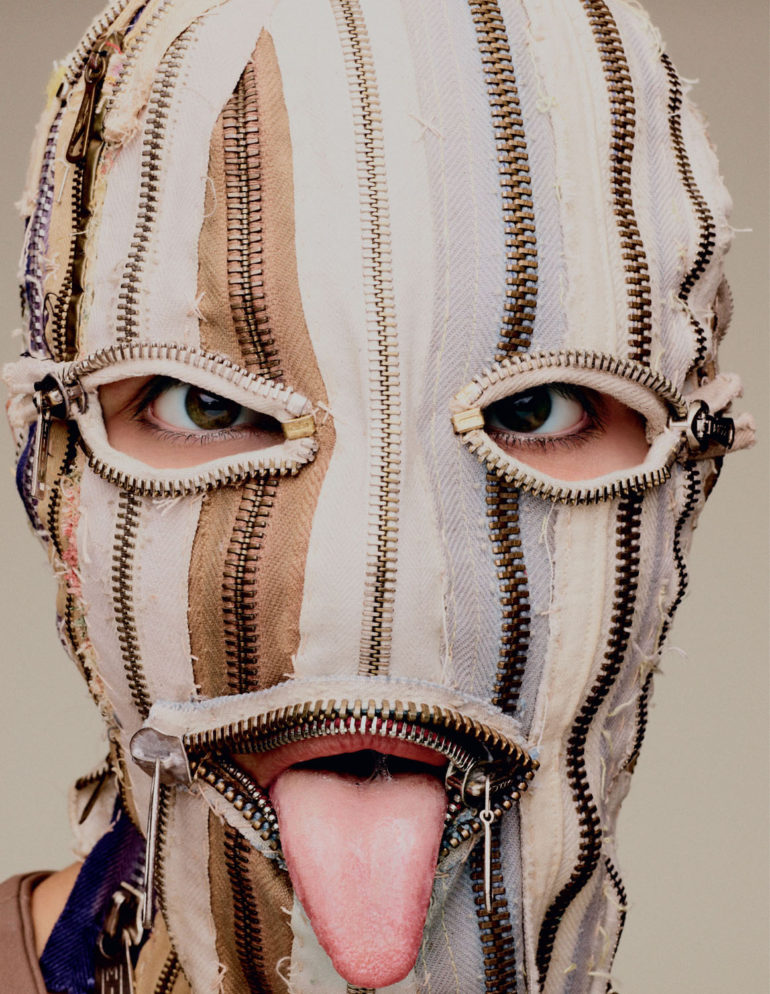 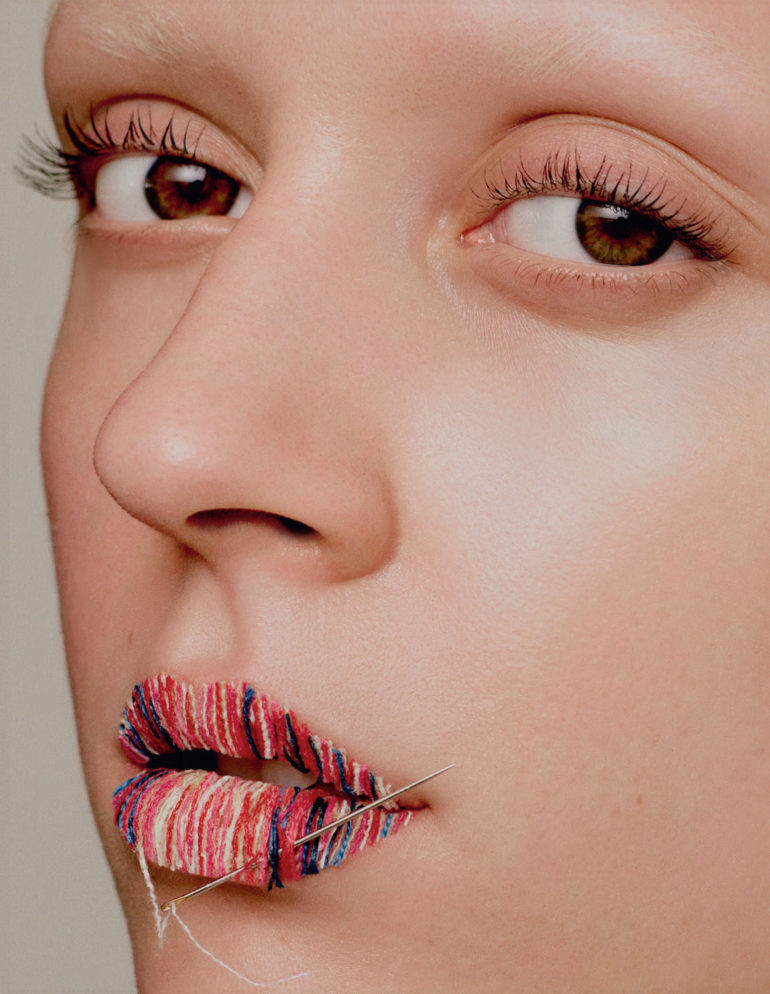 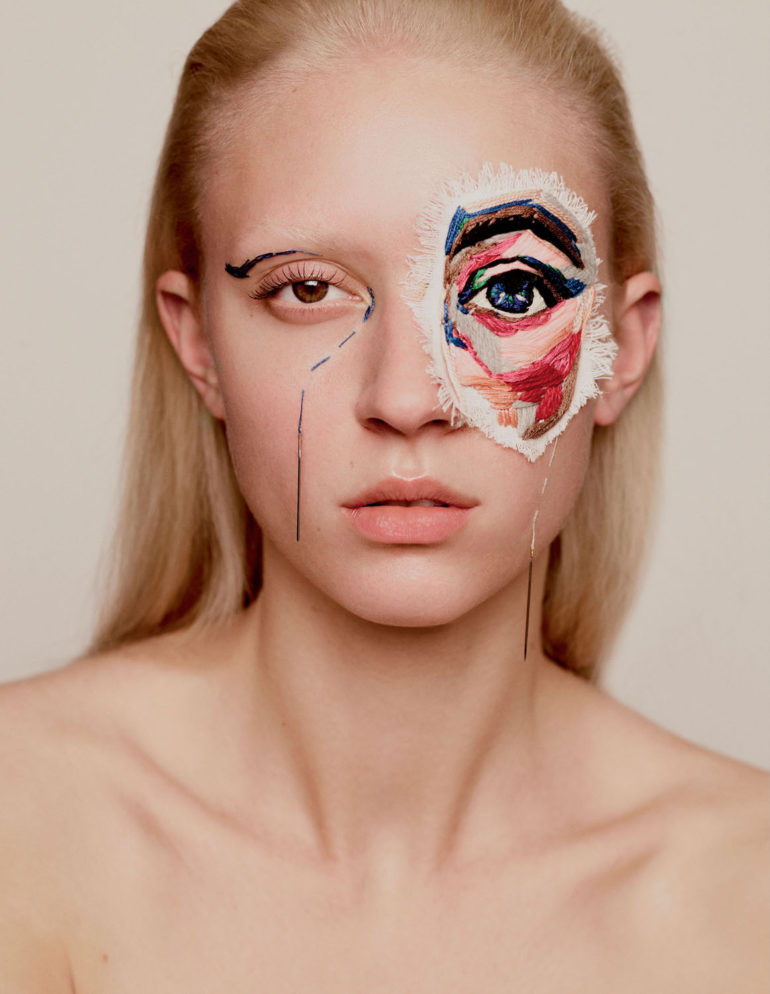 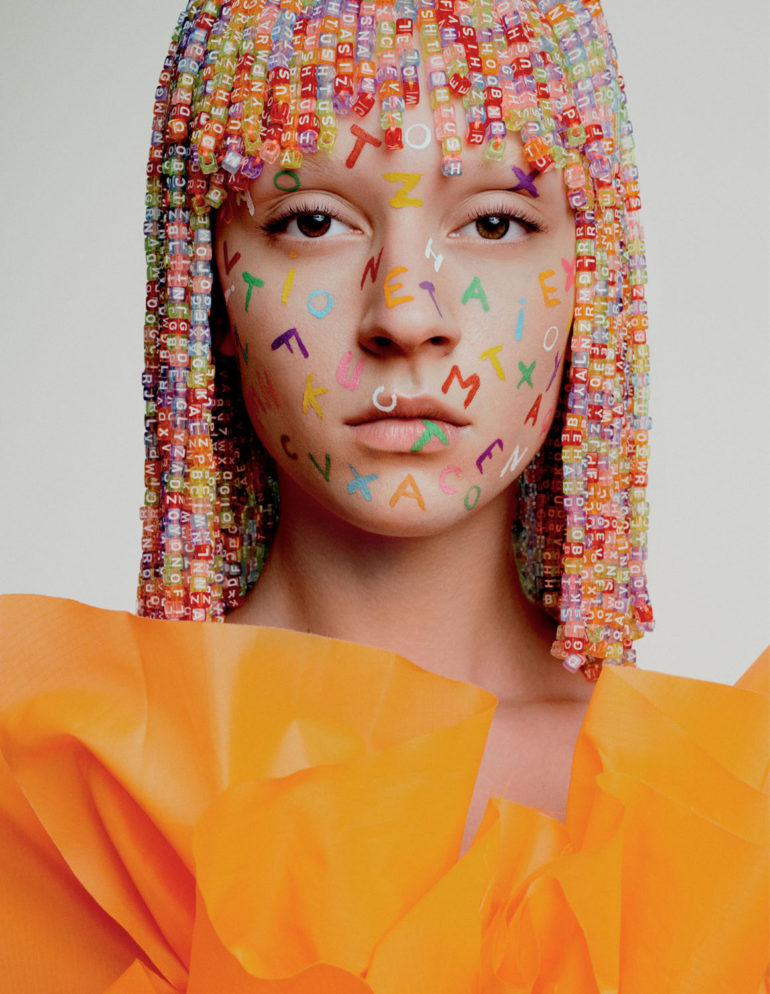 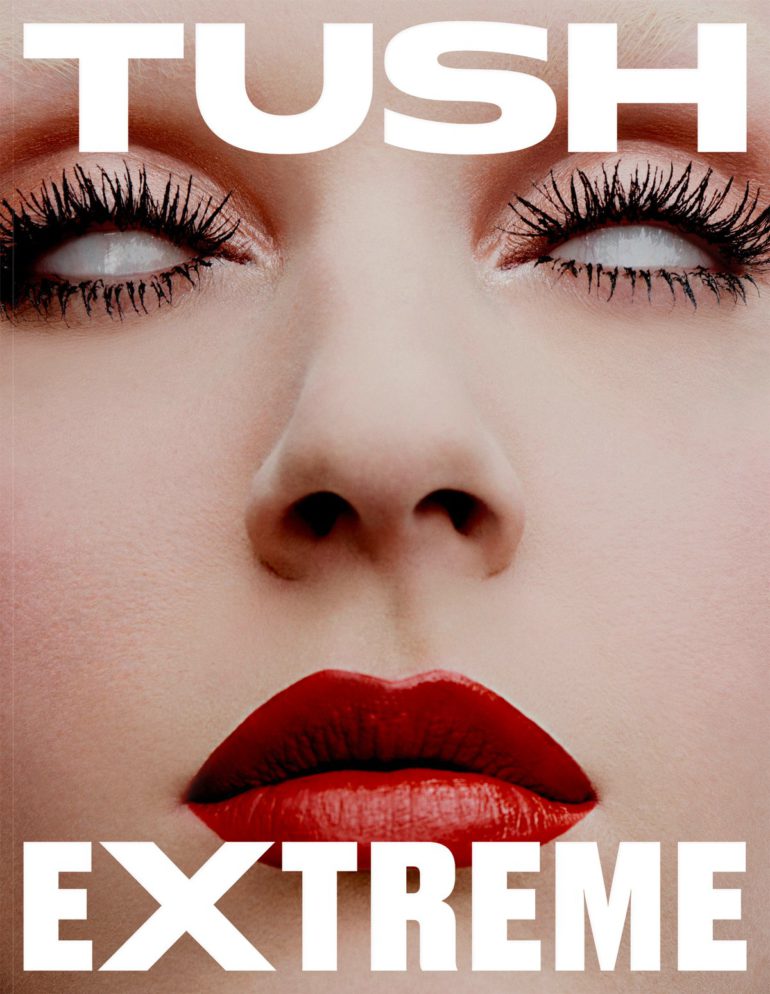 Seduced by the Sight of Divine Light

A Campaign of Strange Takes Flight in Tush

Trance State as Beads Dangle Down in Tush