Georgie Hobday exposes her many layers in “X-Ray” by Rankin for Hunger Magazine. In one of the most prophetic passages I read by poet E. E. Cummings was, “The greatest battle we face as human beings is the battle to protect our true selves from the self the world wants us to become.” By taking pieces of that conceptual treatment and mixing it with Rankin’s unique view of things, we have access to what I call ~ The Rankin-Reality. Who I Am Is What You See… Framed by a Face That Is Not Me… Under Truth Aims to Be… A Life I Long to Share With Thee.  poetic prose – tanyajo

My thoughts are suspended my world upside down… as the angled iron of resistance turns my mind all around. She shows many faces like a runaway dream, aching to come together longing to be seen. What is truth… what is reality… Is the mask we wear our truth or is it the skin we find below? That is truly a deep question. If the skin in which you live in isn’t what you desire to share with the world, then who are you… really? The masque you portray or the skin beneath it? With which do you choose to represent you. This is the eternal question.

Georgie morphs into a Womannequin, as she evolves through the conceptual construct of becoming. Taking a surrealistic step toward the idea of melding, her body follows through the prophetic use of prosthetic molds. Artfully exposed, this imagery makes us question who we really are. Following the ancient, Celtic holiday, when people believed they needed masks to protect themselves from bad spirits that roamed the earth. This takes that story to the next level, by allowing us to imagine a world where nothing is as it seems. Avatar Anyone? In the abstract angles of tomorrow there lives a kind of neo-kinetic self. Andrew Gallimore answers the call of the wild with makeup that’s made for the stage. The ethereal spirits of the future find their way in, as an electric energy jumps off the page.

Rankin uses the intensity of momentum, to drive home the idea of synergistic elocution. The evolution of beauty is artfully displayed as each image is a projection of itself. Playing in Plaster of Paris… she cracks herself open to find a surprise as her face is draped with skin intended to be her twin. These questions run deep, in one of the most compelling captures committed to the page. Georgie holds a casting of her own head, as she bends her neck down to one side. The image is utterly intoxicating. Closing her eyes we see her false lashes fan down perfect precision, as her black mouth is marked with a red V in the center of her lips. She’s covered with white paint that evokes an ethereal energy, while the only hint of skin showing through is a circle drawn around each eye. Half masque… half makeup… that is the way Andrew Gallimore plays. Here we see his exquisite talents put to the test, as each face reaches it’s stylized realization.

The next picture is one of intense animation, as the eyes we see are but a mystery. Black brows are drawn overhead giving the image intensity, while dark lines move down giving it a sense of symmetry. Touched with a tone of tenacity, her eyeballs are done in white paint while pupils bleed an ice blue hue. The result is mesmerizing. I suspect these are made to mimic the look of open eyes, while her black lips are overdrawn with an extension turned down to give it edge. We know what we are looking at, but, we still fall for the fantasy.

Abstract artistry makes an appearance, with applications that appear like spray paint on a street sign. The look is evocative, with lines that give it more dimensions. Saving the best for last. Black creates a masque like effect, covering the top half of her all white face. Scarlet lips literally jump out, as we see they are actually applied with a paper like overlay. And then we get a twist. In one image her chin is done in faux skin, with eye-wings done in a grey tone. While, the last shot shows the power of plaster, with half the face covered with a masque. Wires are applied to the lash line, making it appear like an avant-garde masterpiece. This story celebrates the symbolism of surrealism, allowing us to imagine a fusion of faces. 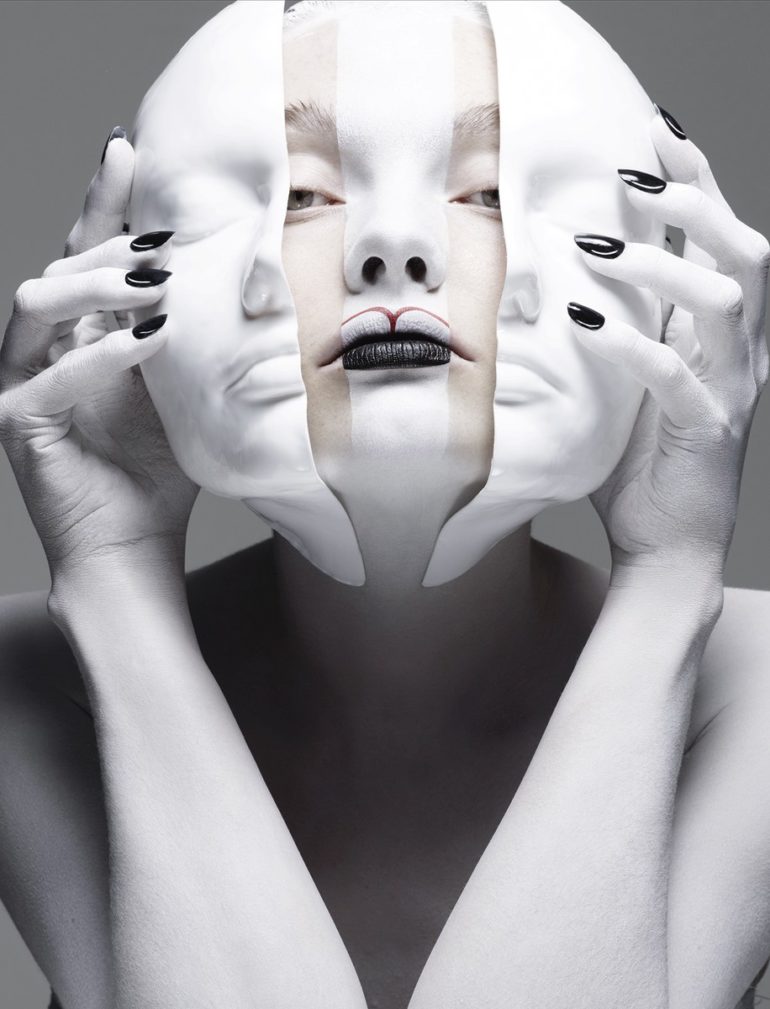 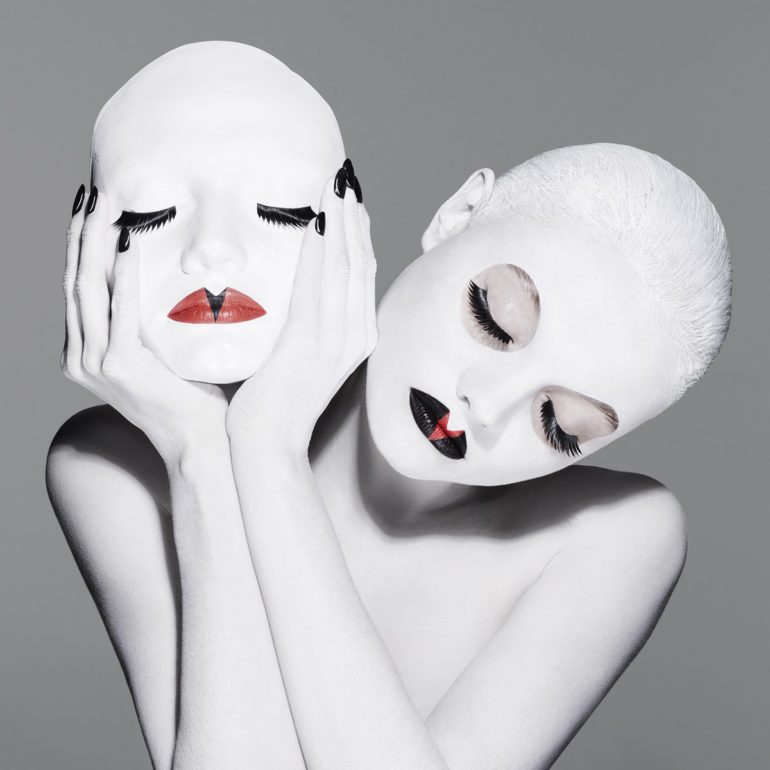 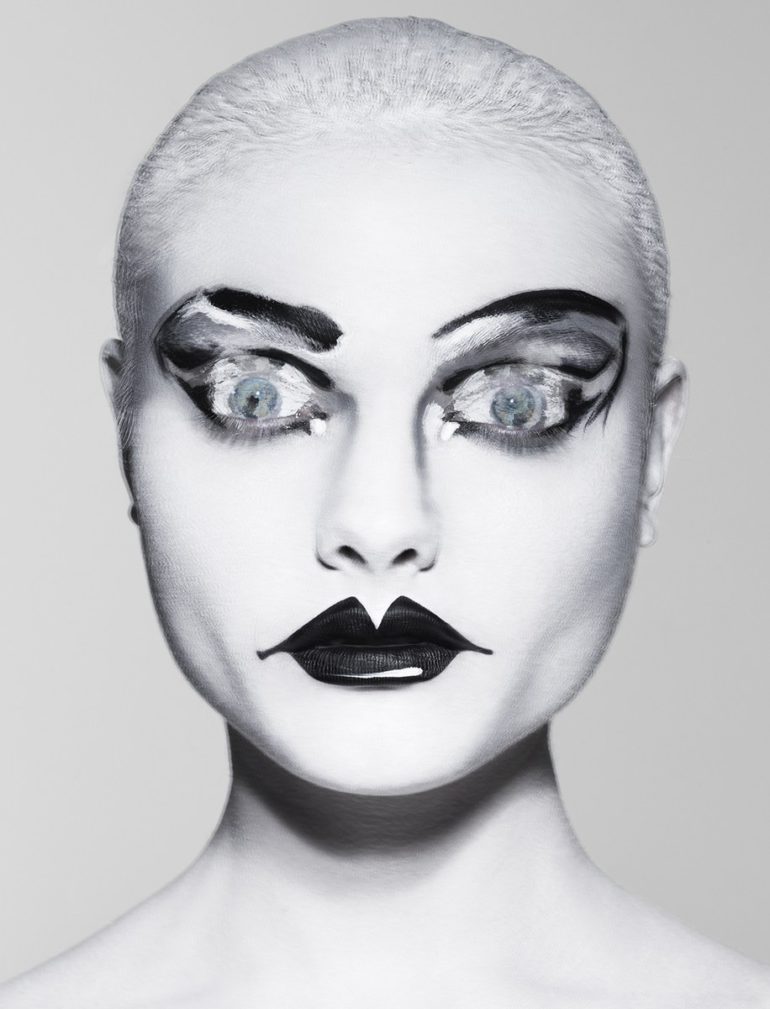 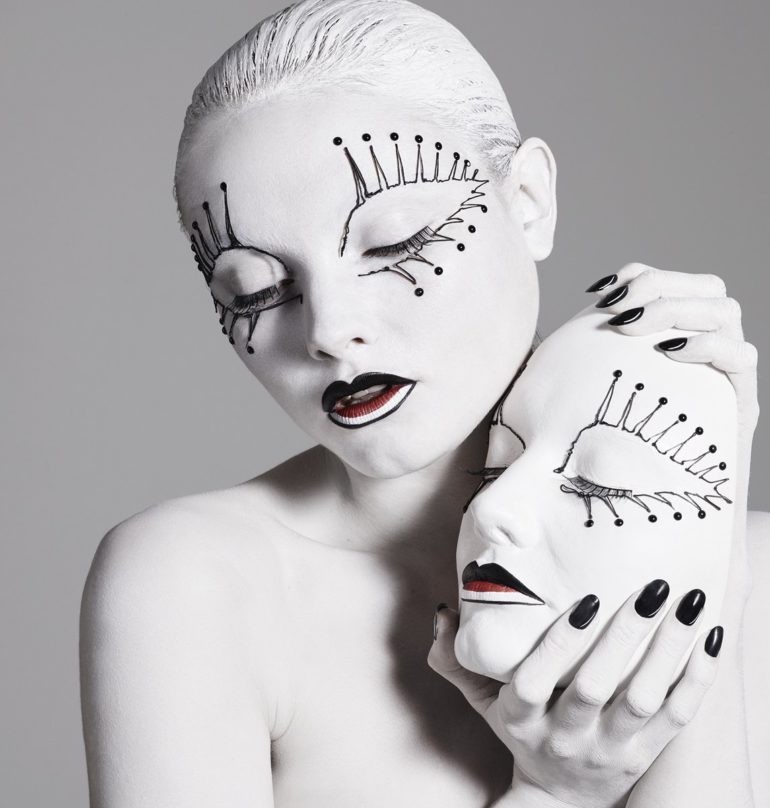 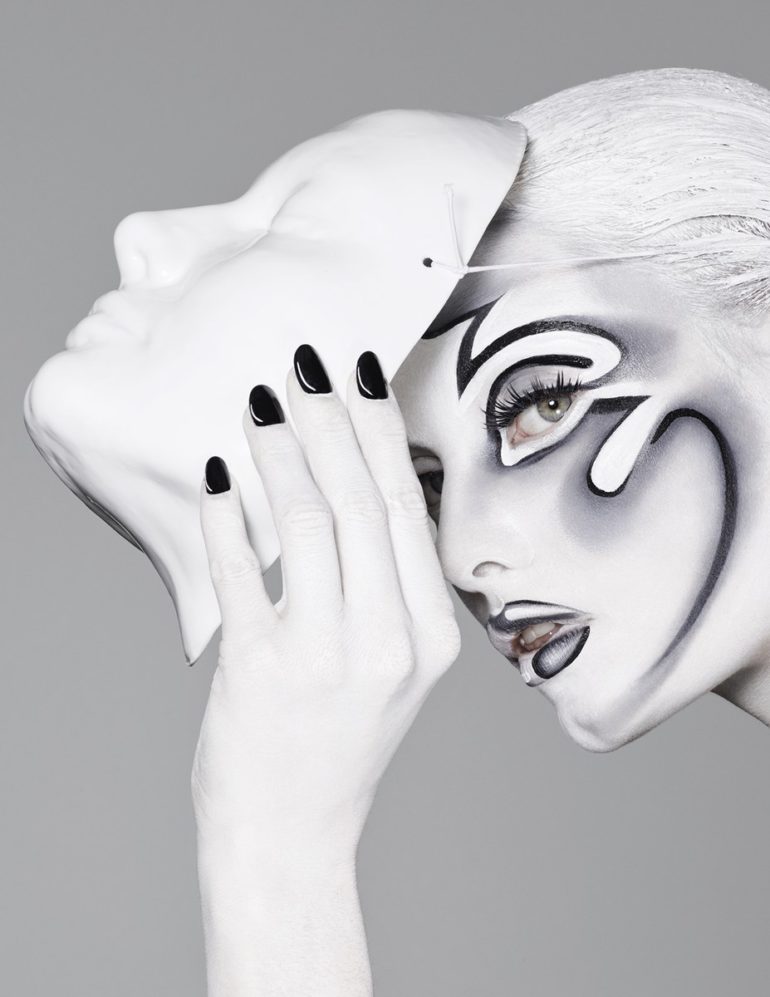 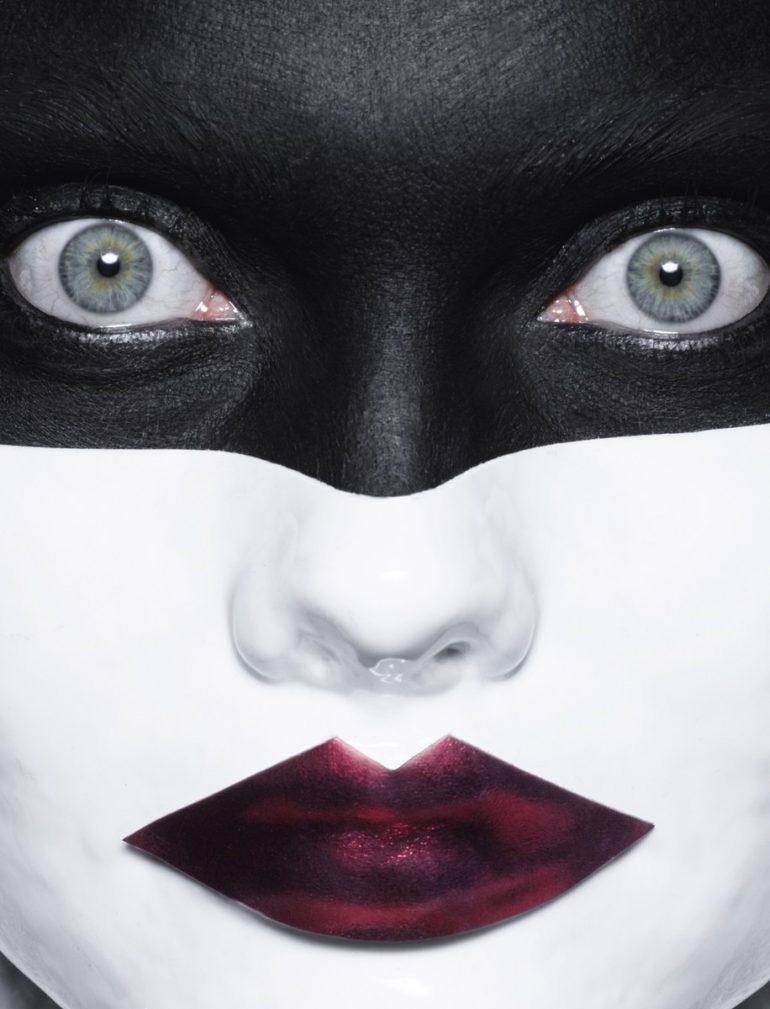 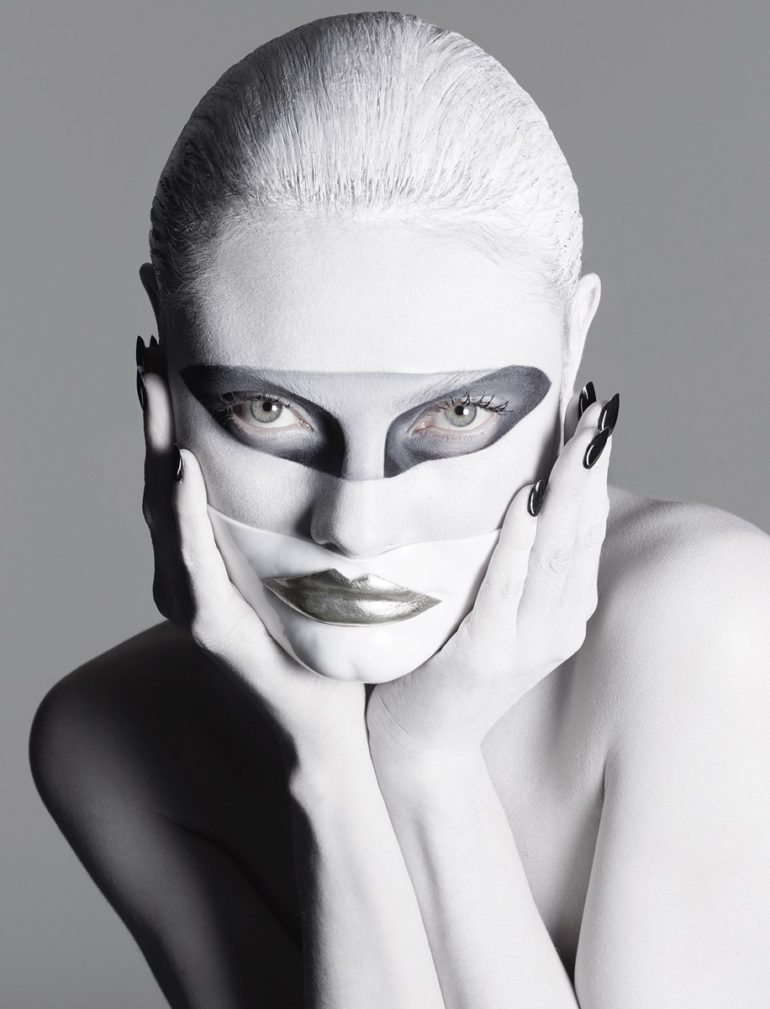 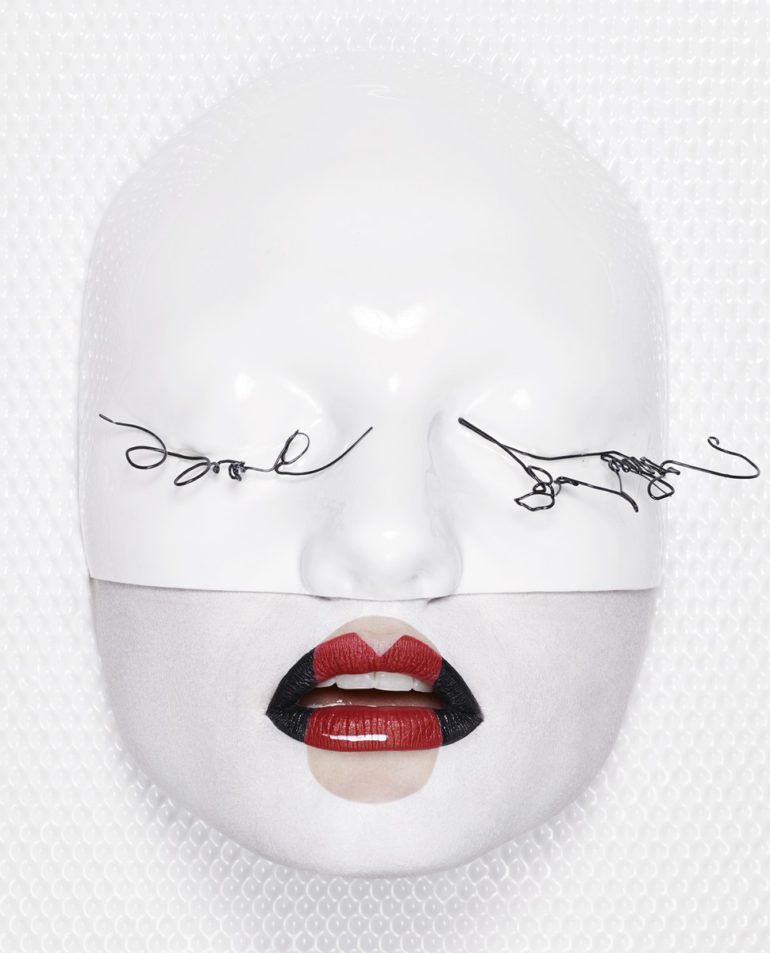 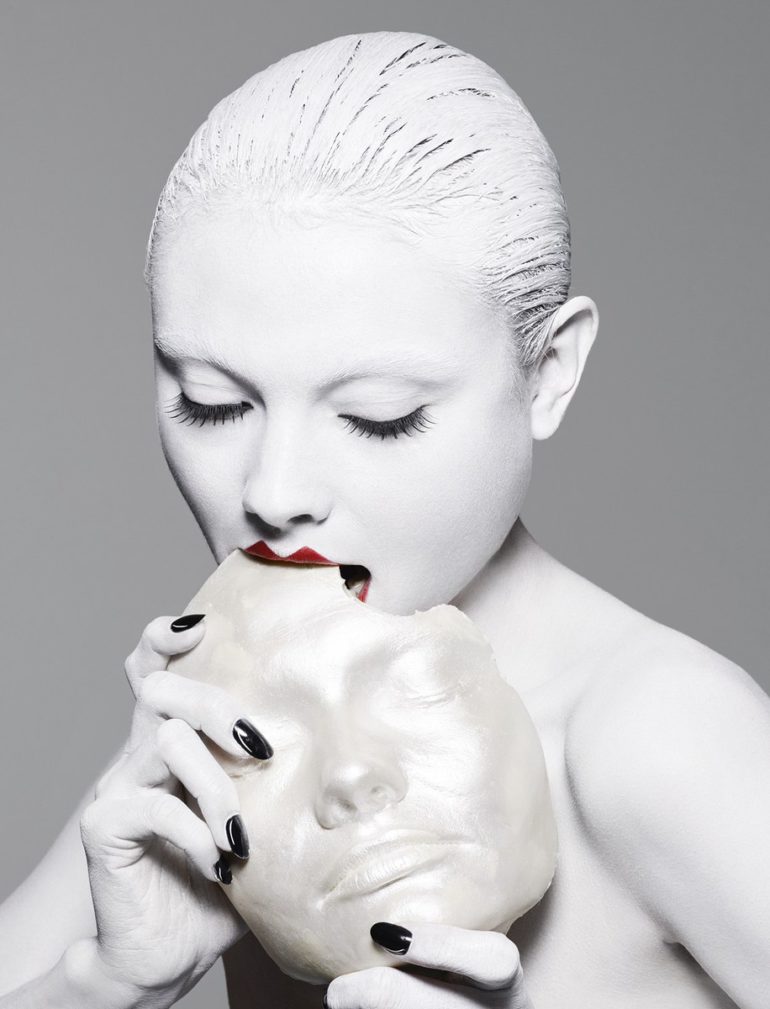 Artistic Side Will Rise & Devour "Daughters of Darkness" Hunger

Beauty is Ablaze in Precious Metals