“THE MYTH IS IN ART,” words spoken by abstract creator, Yves Klein. This line is taken from a piece performed on the stage in 1960. Simple yet strikingly complex. The Monotone-Silence Symphony (first performed in 1960), a performance in which an orchestra plays a single note for 20 minutes, followed by a 20-minute period of silence. Someone seen as divinely sublime. He was an existentialist at heart, but also displayed an egoist sense of being. Everything that existed in his world was there to fulfill a destiny. His “Anthropometry” performances were completely unique. Watching as space morphed into uncommon shapes and colors catapulted into another dimension. Viewers were exposed to a complex series of events that often led to a mind altering experience. This kind of live presentation allowed the spectators to take part in the process. With every daring feat, this exploratory artist lets us know the allegory of parable illusion falls somewhere inside the fantasy-fabled realm. His work called for a rich imagination, but also it demanded a strong mind. That which existed in his world was there to fulfill a destiny. He described his work as a liberation of emotion from the restraints of line and object. I see Klein as a forward artist who saw nothing but potential in everything he touched.

In March 1960, at the Galerie Internationale d’Art Contemporain, Paris, Yves Klein presented his Monotone Symphony and Anthropométries of the Blue Period. Whilst a ten-piece orchestra played the symphony, a work consisting of a single tone. Three naked models rolled themselves in blue paint and then pressed their bodies onto the waiting paper. What resulted was a series of innovative paintings that required a high level of physicality. Klein’s idea was to distance the artist from the creative power. Leaving each model to face the canvas, and to find their own process. Shocking but not salacious. He was a visionary. Far ahead of his time. Like many artists before him, he was shunned for his forward thinking. It is only in retrospect that we can appreciate his truth. If we could only go back and try to understand the nuanced approach to such genius. Would it make a difference? Would the scope widen? Or would we get it wrong, again? How history can be cruel. It is only in the weary of work and trepidation that we are allowed to venture outside of our own little worlds and begin to see a new way to be. This was a compelling moment that would serve as a candle to light the way.

Diving off the side of a building we see a man possessed. In his short life he was a voracious hunter. He longed to taste all of life’s pleasures. And to him, that meant to push the body and mind to it’s ultimate limits. It wasn’t just a question of survival. He seemed obsessed with the process. To take this strange journey, one had to be willing to venture close to the edge. Dangerous yet deeply pleasing, one could see this wasn’t just a question of coverage (although it was clear that Mr. Klein never met a camera he didn’t like). It was touching a place in himself not otherwise felt. As he dove off the rooftop like a Olympian in perfect form, we saw a hint of something more. His form held what I call, The Silent Scream. An aching that exudes from the body in it’s natural state. When he would engage in these neo-nomadic actions – he would transform to another time and place. A strange journey indeed. But, one that every artist has considered. It’s merely an extension of self.

A master of Being. Yves Klein was a man ahead of his time. His pieces reflected his psychology. He was a visual conveyor of genuine genius. An avant-garde artist. Always pushing limits. His foray into Body Art, using the female body as a brush, was both dynamic and distinctive. His goal was to expose the elements of change that can happen within the boundaries of the application process. This allowed the natural form to take shape. Simple, yet strikingly complex. Remarkable choices made what might have appeared indulgent, nothing less than exquisite. On the fruitless plain of existence we long for direction that’s never going to come. In this visionary, we had a thinker far ahead of his time. His life (while divine in every aspect) couldn’t have been easy. A ship that everyone considered to be off course, but, he knew better. To some he was a charlatan to others an avant-garde master. The pathos of his tragic ending could only be met by the penetration of his process. A collection of poetic pieces designed to stir the sentient pot… to be one with the process is to be one with the game. And, that he was. 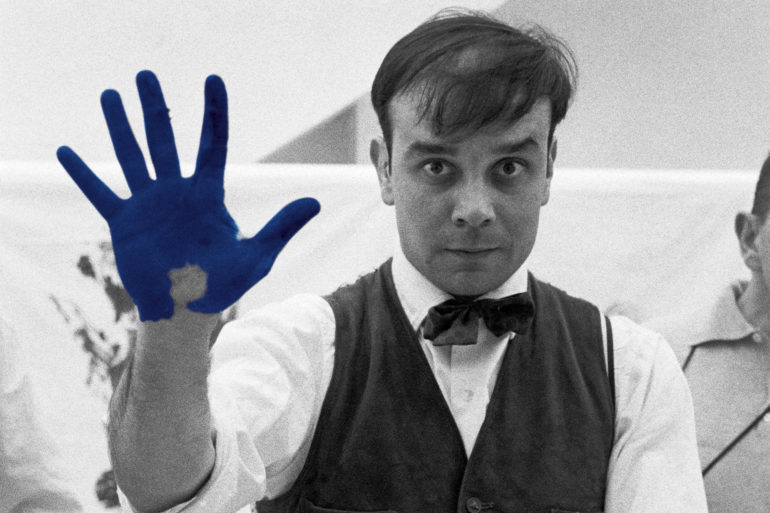 Settle into the soothing blue of “Monotone Symphony” by Phil Poynter for Ponystep. This modern interpretation of the vibrant artist was done in S/S 2011. Just like the acts that fell upon some deaf ears during his lifetime, we now see Klien’s work raised in praise. Performed many times during the 60’s decade, this editorial becomes an ode to the original. As time passes we appreciate the forward thinking actions that were put in place to make every installation nothing less than exquisite. Bok-Hee has them wearing platinum wigs, while Sil Bruinsma concentrated almost his entire energy on the work of the eyes. Black liner and radically darkened brows blast off against a white background, giving the look a grounding resonance. Emily Senko & Julia Dunstall are shown together but appear apart. Let that resonate for a moment. It’s profoundly poetic meaning will become clear. His dynamic work captured the essence of femininity, by honoring the strength of the female lines while paying homage to the chaos that lives inside. The Beauty of Blue…

A pool of color sits in the center of a perfect white floor. Nothing disturbed. Nothing off cue. The Band Plays. A classical tune. Symphonic sounds drown out the noises that are singing from the room. Notes of nuance rise up to meet the aire. The mood is festive, while there is an underlying level of quiet contemplation afoot. A woman appears. Seemingly unaware of those around her. She stands naked in front of the room. At ease with her nakedness, she becomes attuned to the pool of color flowing below. Dropping to her knees she begins to contemplate the idea of connection. Before the thought marinates, she dips her fingers in the liquid. She pulls her hand from the Egyptian waters watching the skin morph. Mesmerized by the blue hue she begins to go deeper. Limbs left naked are quickly covered. Shades of cyan swim over her skin, as fluid floods the body proper. The paint covers more & more until what’s left is points of random discovery. Loosely left pieces. Nude hues now peak through the painted barriers. Leaving nothing in it’s path free from it’s touch. Making way up the walls and over the floor, Blue bleeds from the body always wanting more.

Until there was Blue there was None. Art is a Construct of the Mind. Art is a Living, Breathing Animal. A Soul that Seeks Meaning. A Shape that Longs for it’s Center. Art Is the Act of Truth. When Humanity and Heracy collide, Opposing Forces Combine. On a Collision Course of Creativity… That Which is Consequential is Captured. That which is Naked has been Clothed. Look Beyond What You See… For All Your Answers Live Somewhere In-between.

In the sanguine waters of wonder swims the tadpoles of tenacity. Travel to a world unknown. Open your heart and free your mind. Transcendent Spirits has the notion to thrive, growing free they have The Gumption to Survive. 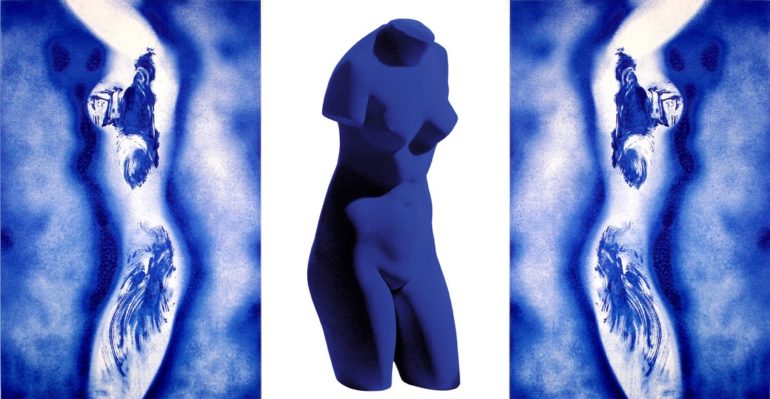 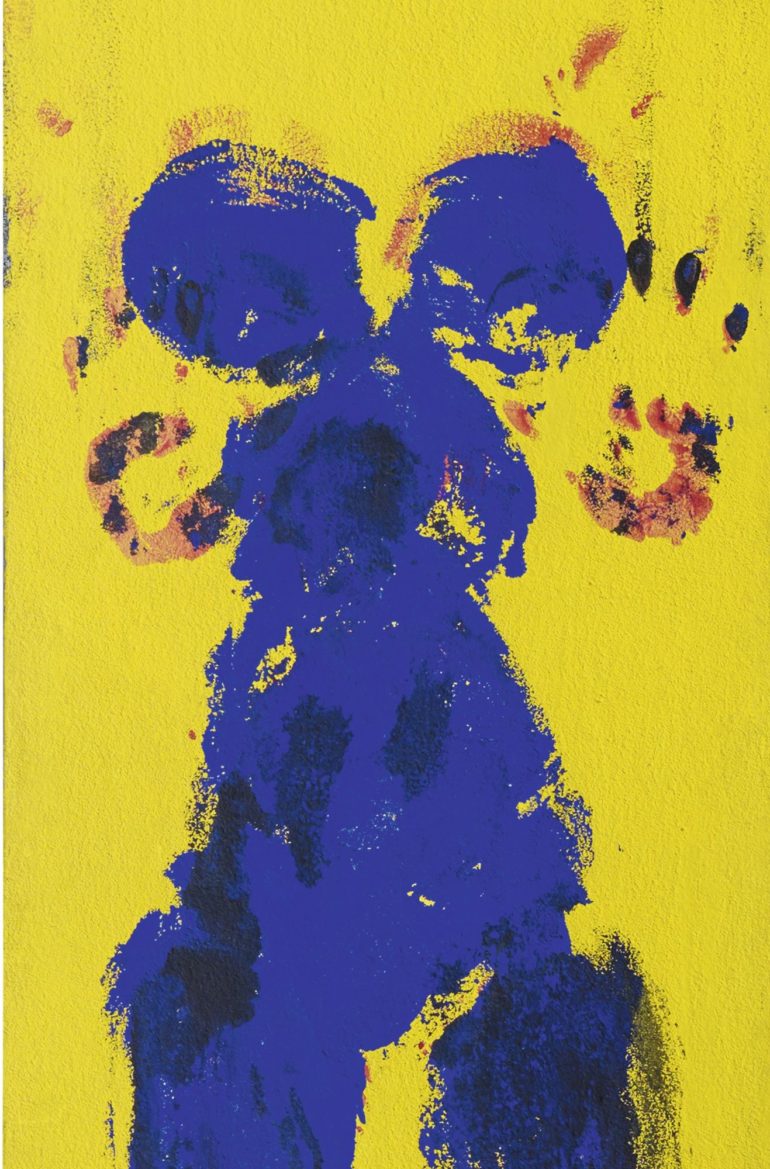 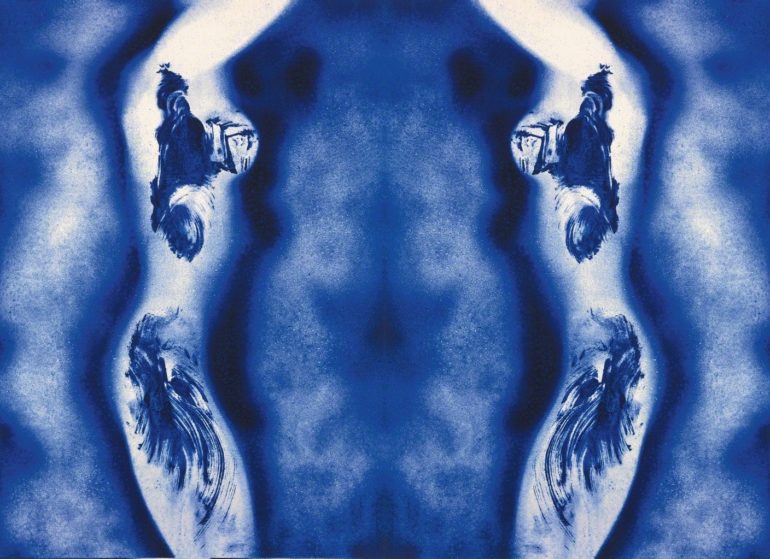 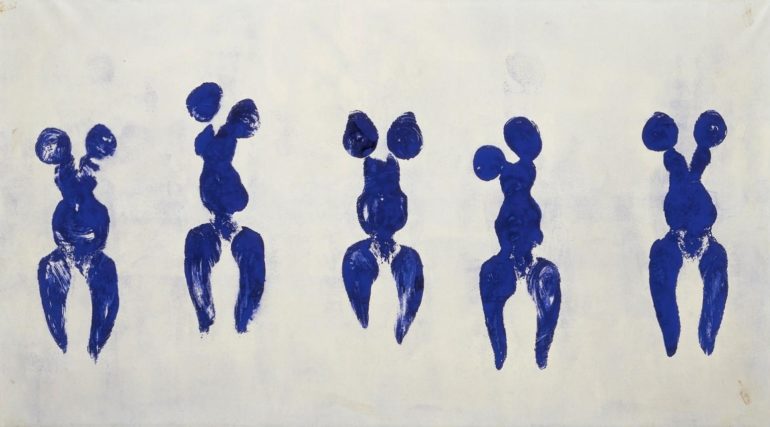 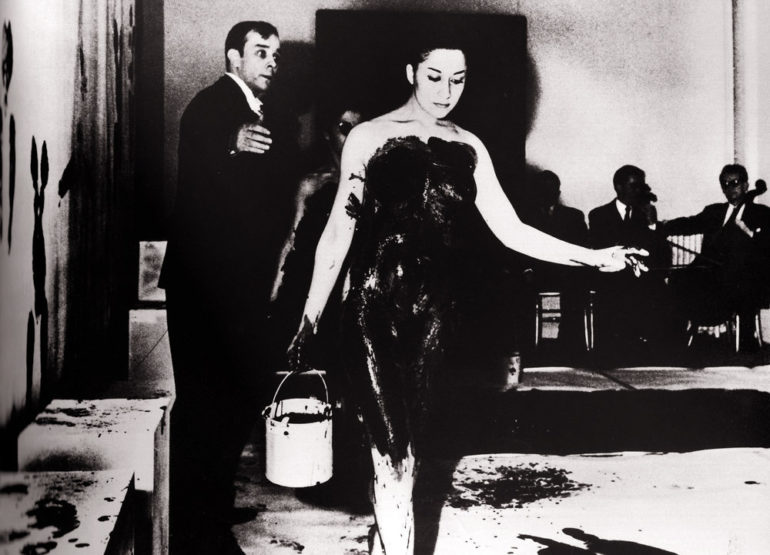 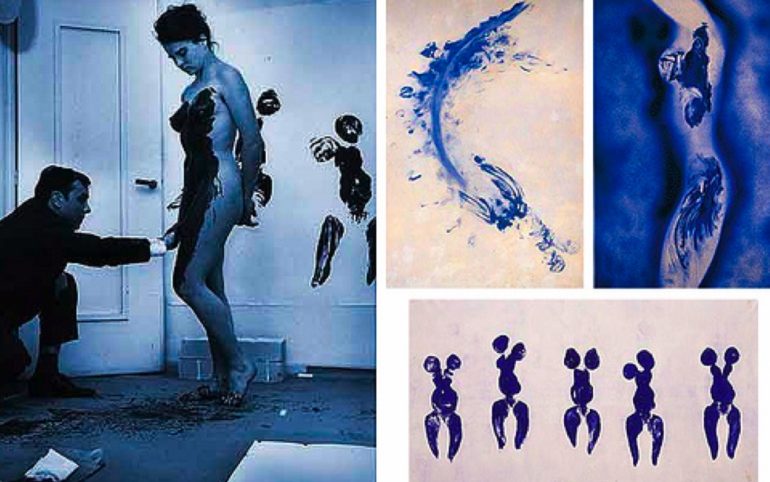 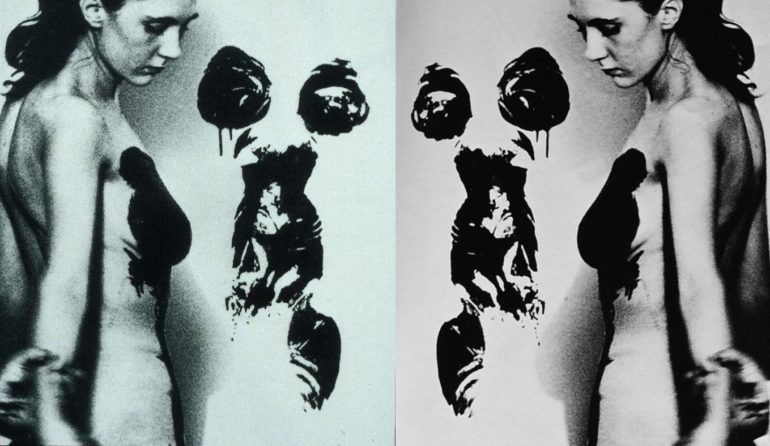 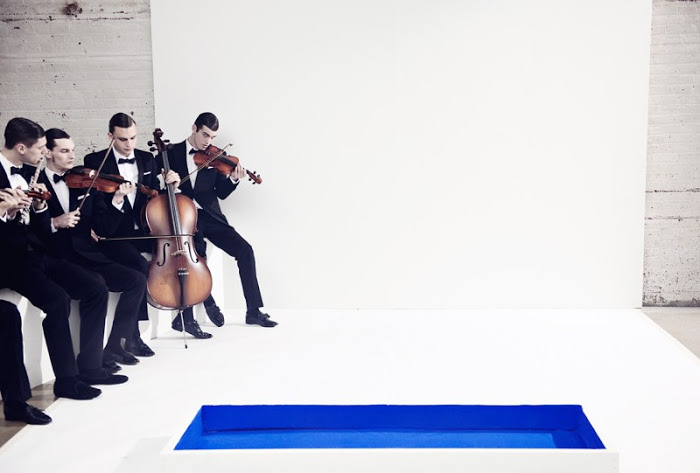 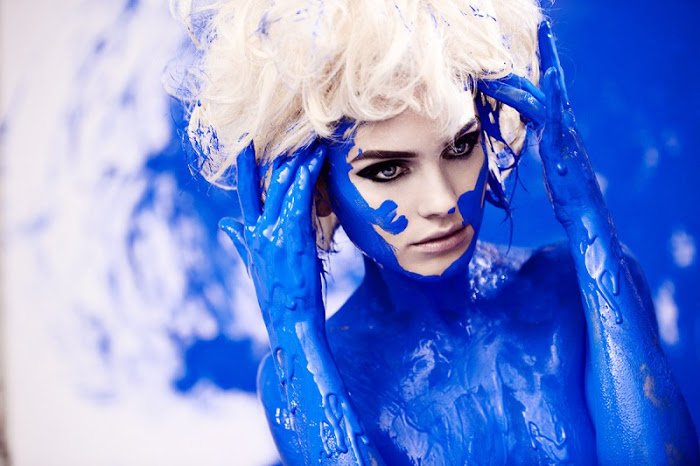 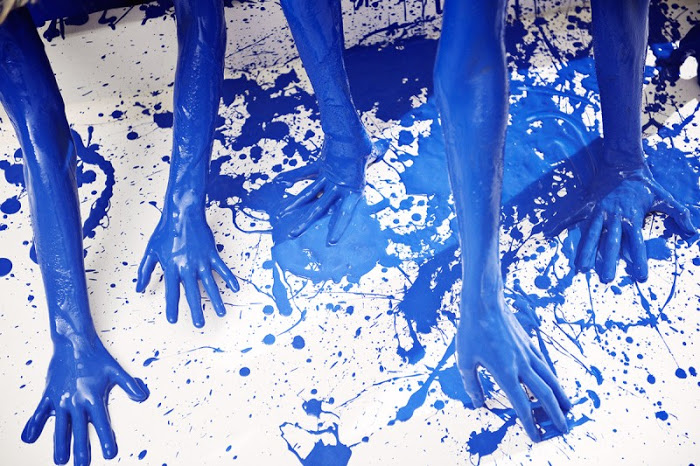 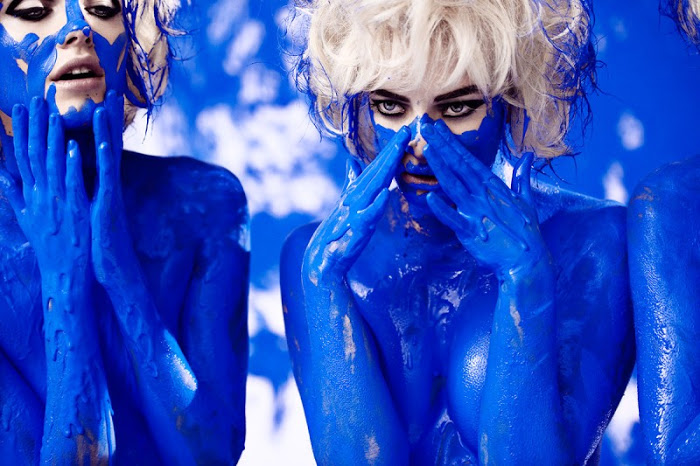 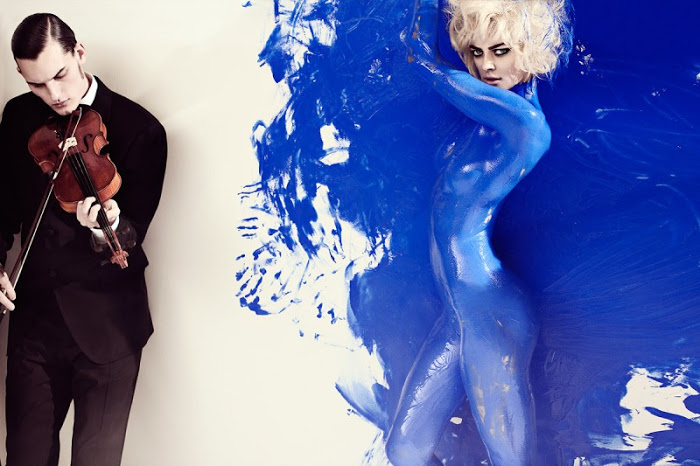 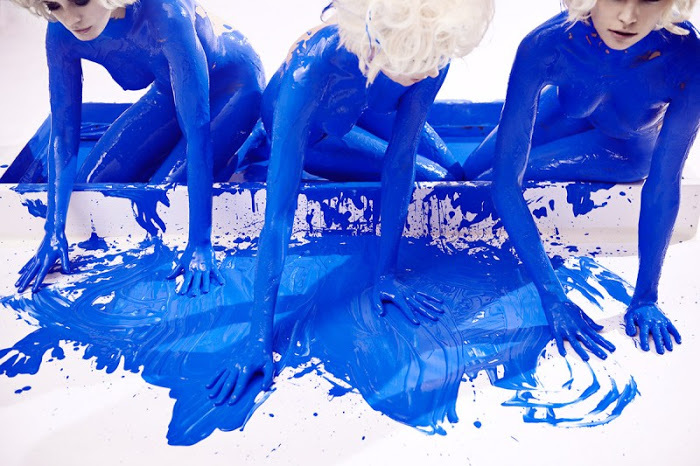 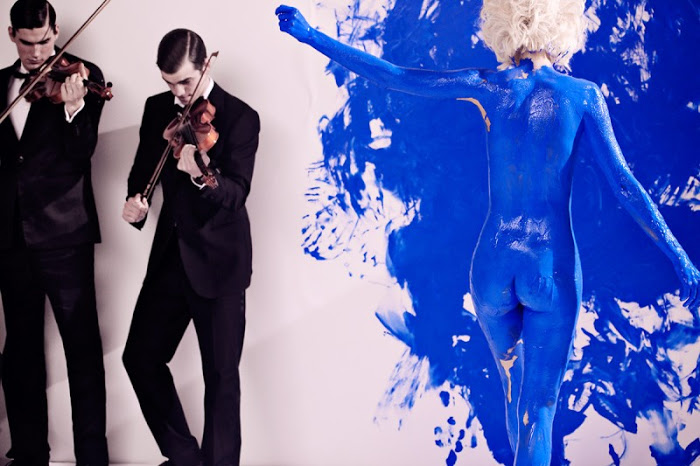 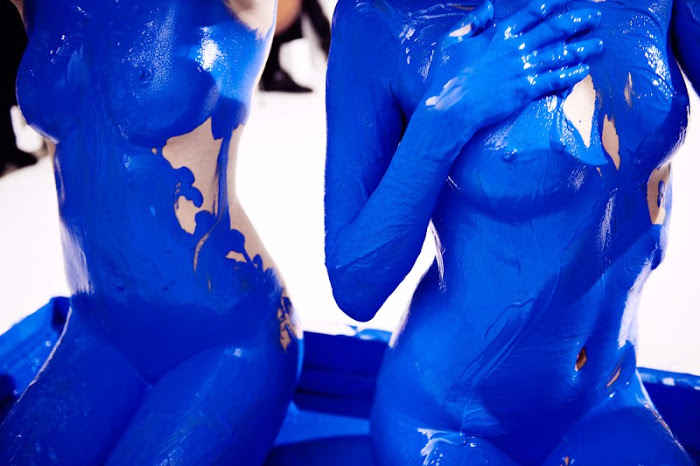 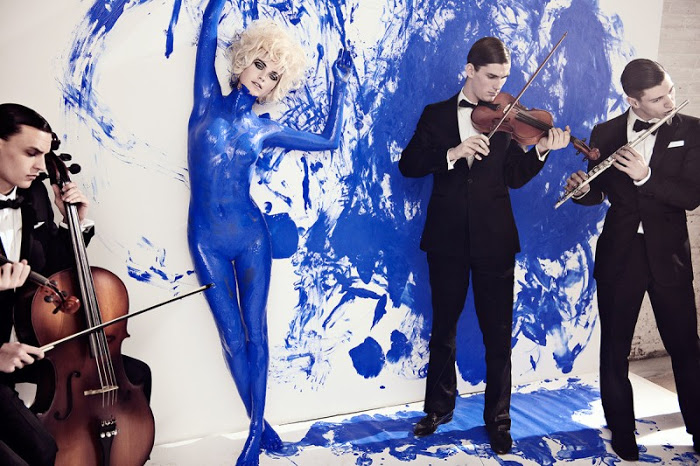 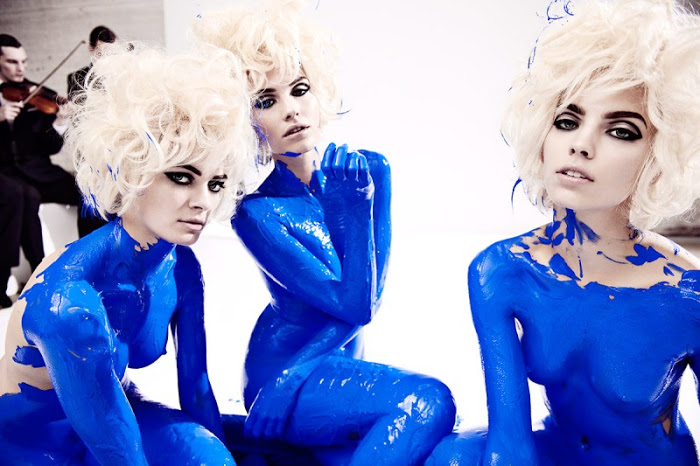 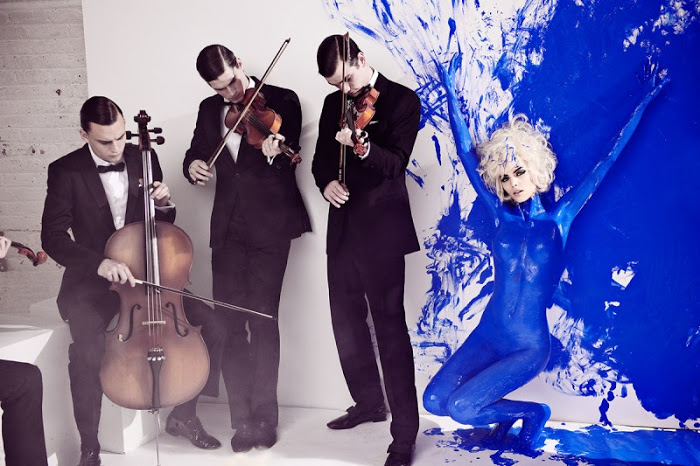 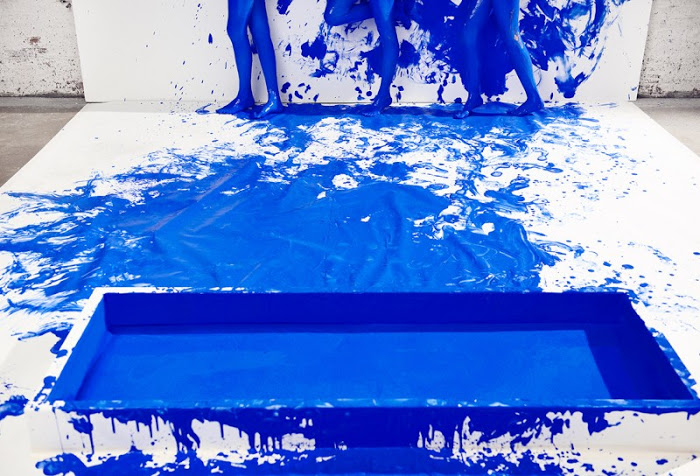