Maike Inga calls to the spirit of Pierrot in ‘Paper Hat’ by Jamie Hawkesworth for Love Magazine, SS 2019. Maike plays Pierrot, a sad clown, who’s history goes back to 1660, at Palais-Royal theatre in Paris. The mysteries of the modern mime are captured in this poetic picture of street pantomime. A dramatic study in artistic emotion. She sinks into the dimensions of the many parts, breathing life into every one. Her performance is anything but silent, emoting energy that’s alive with power that needs no words. Said to be sensitive, melancholy and solitary, she depicts this range with vigor and vivacity. Projecting thoughts through movement becomes her voice. The countenance of creative body-art is the act of neo-expressionism. This is a form of interpretive dance. Her eyes widen as if to convey a sense of surprise, her lips turn down to signify sadness. The apparatus of each body part explodes, from her leg lifting to the pointing of her toes each holds a graceful pose. Asking the world to join the festivities. Sad Clown can be considered both playful and daring. The music of melancholy plays on as she sings through the Parisian streets. A most compelling contradiction, the embodiment of which is expressed through unique character types. Acting through bodily motions is experiencing language as an extension of the expression. She never breaks character, rather sinking into the rich tradition of Pierrot.

Olivier Rizzo creates a wardrobe of wonder with fashions fit for a modern mime. Paris comes alive, as this playful story-line has Maike making her way through the city of lights. Revel in ruffles as Rizzo’s use of bold fabrics takes us on a trip through the ages. Dynamic designs give off a sense of spirited authenticity. Some are strictly feminine, with long, flowing fabrics that billow en-large. While, another has black pleats that open like a winged dove. Costumed couture captures a more masculine tone, with knee-high pants and elbow length sleeves topped with black bows. Theatrical fashion appears as if taken from the stage, with styles that run the gambit from sadness to exuberance. Like Pierrot mid-pantomime, we get the sense that each expression is a celebration. Her costume creates pleats that explode upon her transition from a vertical stance to a horizontal view. The ruffles are the star, as each silk plumage seems to take pride in the rise. En vogue, her character wears a variety of stunning attire appropriate for performance wear. Her physical being acts the story through the bodily emotions, while each costume creates a sense of synergy. Eugene Souleiman steps away from his usual gig as hair-coiffure extraordinaire to perform a few, new hat-tricks, as it were. The quintessence for the mime has always been a somewhat battered top hat. Thus, the headgear inspires a sense of sentiment/revelry. The focus on the hat is a playful addition to the ensemble proper. Baring in it’s name, the “Paper Hat” comes to represent a declared spirit of hope.

Mark Carrasquillo’s presentation of the modern mime pays tribute to the past, while honoring the art of change. I have always been fascinated with the mime’s face paint. The purpose of which was to help the audience see the performer from far away. Specific shapes correlate to a specific response. A tear drop demonstrates a sense of sadness, while a jovial swirl indicates a sense of stimulation/merriment. Mark fashions face art that honors modern mime makeup. Conceptually driven, his work is designed to express emotion without words. Every dramatic role is distinct, with created affect that brings each character to life. And, while some may seem simple, I see clarity in his makeup. White pigment-paint covers the entire face, with not a hint of skin showing through. While a subtle shade of gray makes a circle around the left eye. Black liner follows atop the lid, continuing around the inner-eye and half-way across the lower lid. A curved line transforms into a show-stopping swirl, following form to the middle of the forehead. Ending with a bang… one perfect, black tear is drawn over the left cheek, perched on high fighting the gravitation pull. This is the music of makeup. The face is enhanced to aid our escape into a world of fantasy. Brimming with beauty that beckons us home. I’ve always seen a proper mime as a complex character. The Makeup of the Mime is a theatrical event. While simple, her skin evokes a deep sense of symbolism and stage presence. Maike’s magnificent performance is only enhanced by Carrasquillo’s captivating cosmetics. BRAVA!!!

Shining Eyes Take Pride in the Rise as Ruffles are the Star of the Show! Silk Plumage Presents a Flowered Effect… Inviting Us to Fly ~ a world beyond my wildest dreams is where I long to be… a palace of forever is the illusion that I see… for it is I and I am me… the darling angel of the forest tree… a weeping willow… a crying child… a singing pony… a world gone wild. On a journey around this fine town… I find a place where truth is abound… love is lost as hope is found… basking in the beauty of a storied surround. A stance imposed she holds a graceful pose… from the lift of her leg to the point of her toes there, the apparatus of each body part explodes. Seek the Soul of the City on this Wild Journey as You Enjoy the Drama of Tragedy through the Character of Comedy.  poetic prose – tanyajo 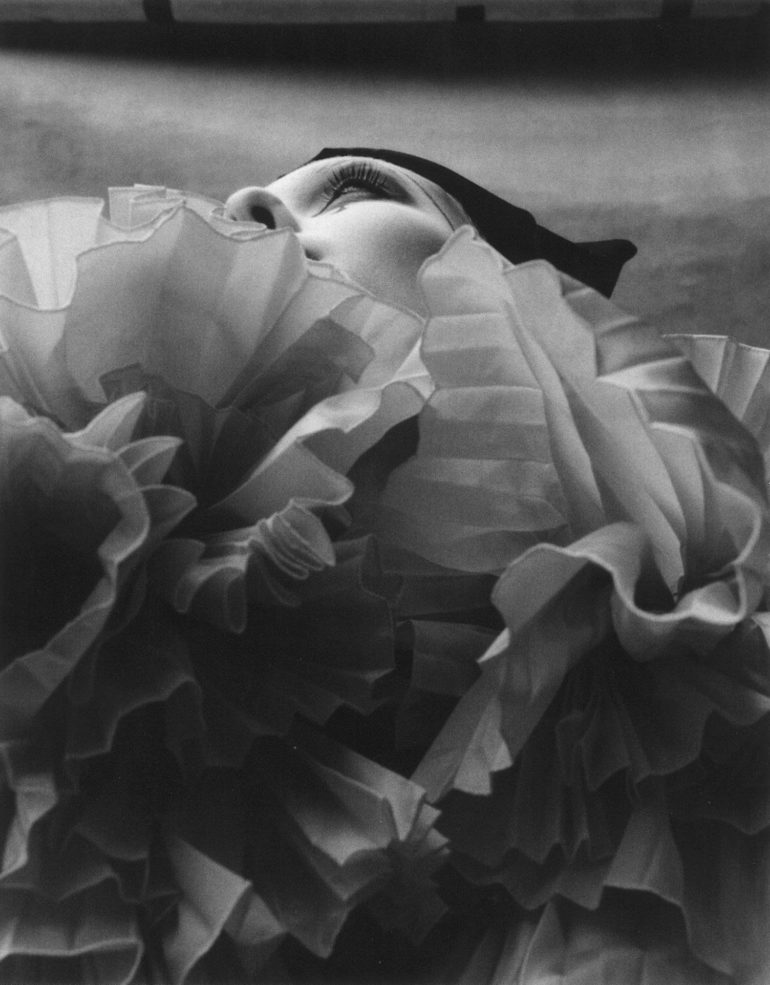 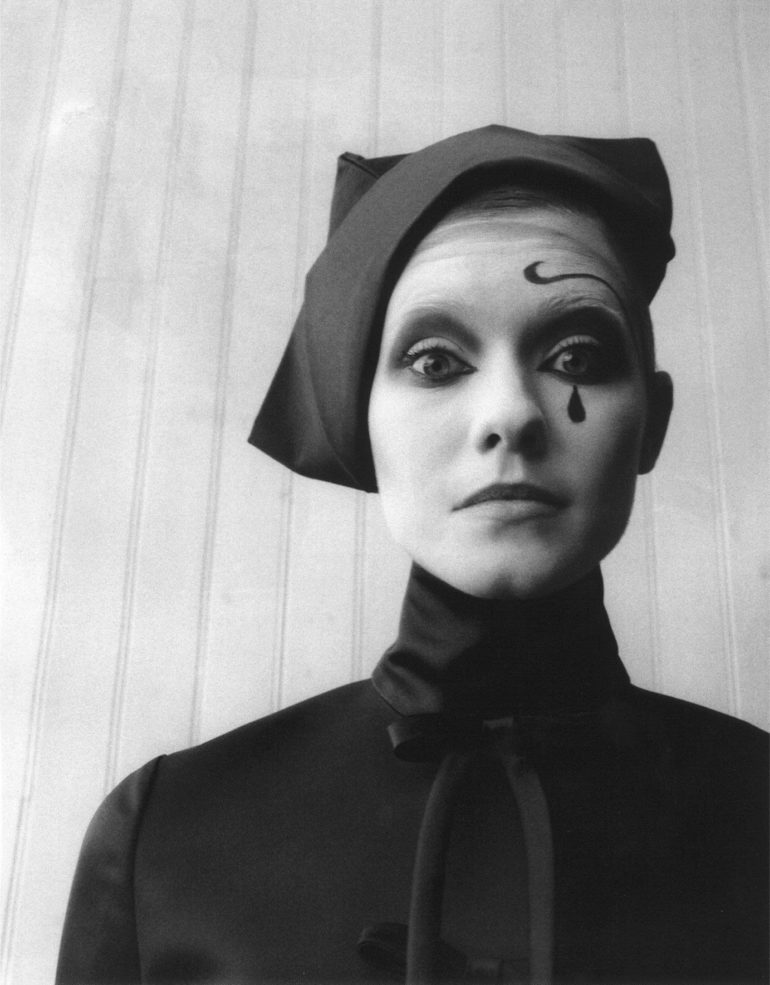 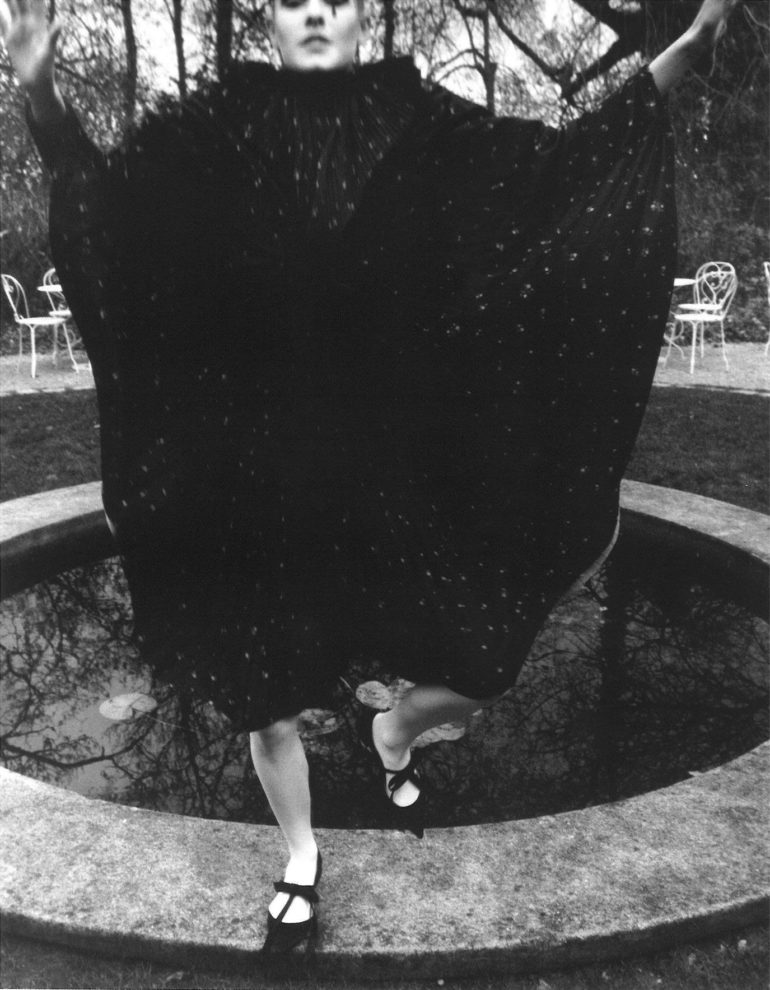 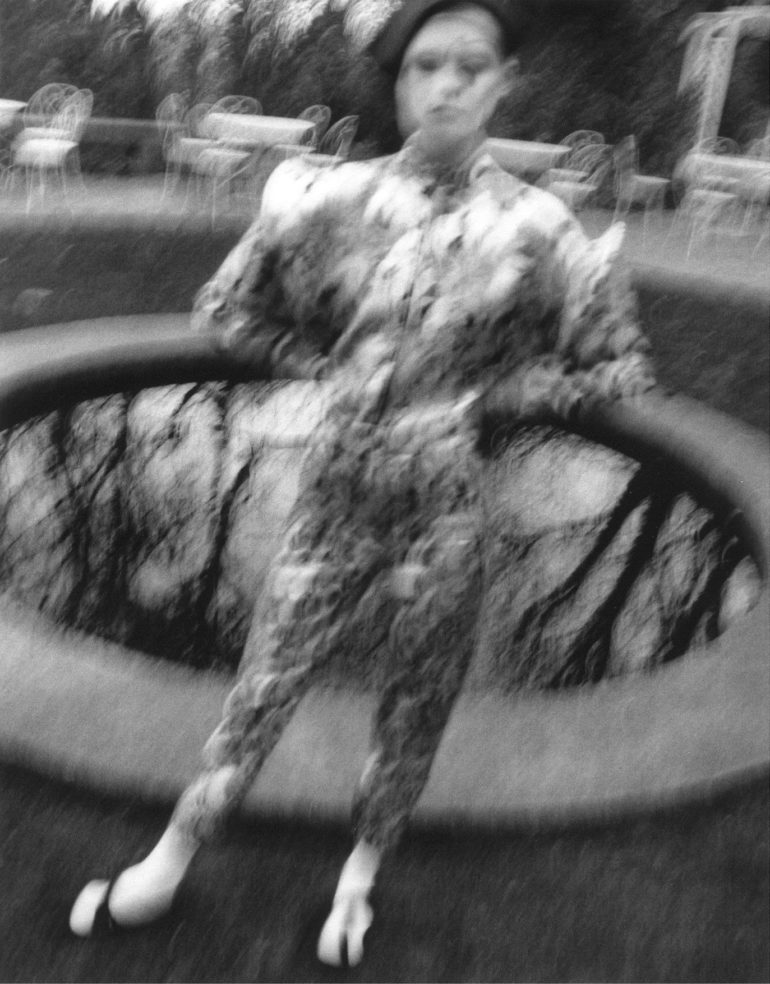 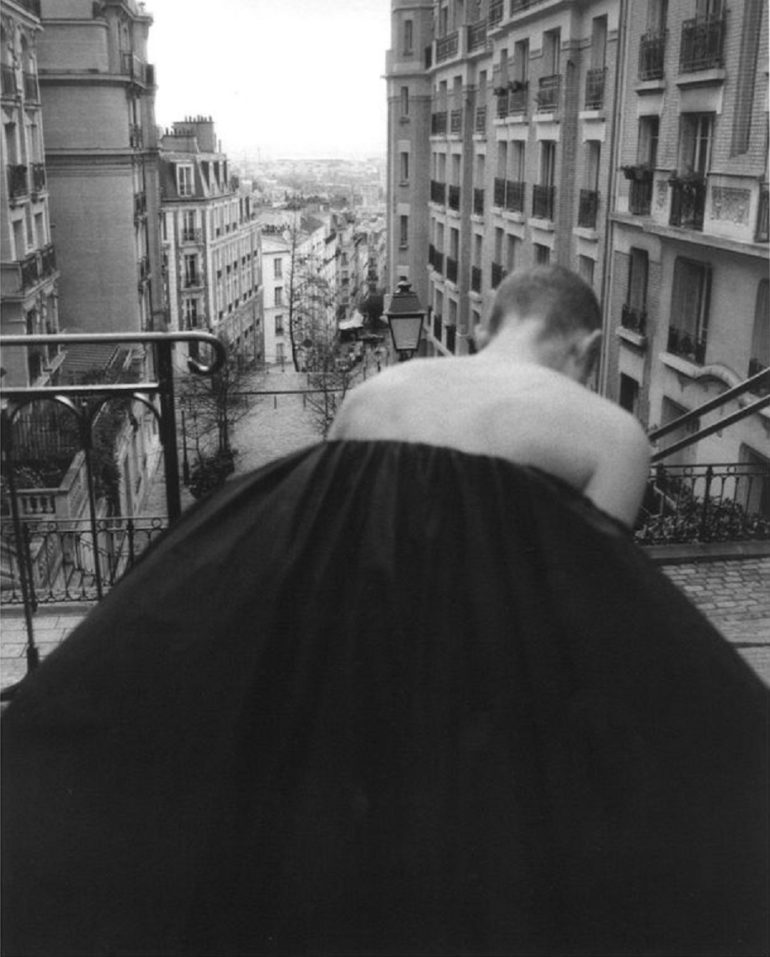 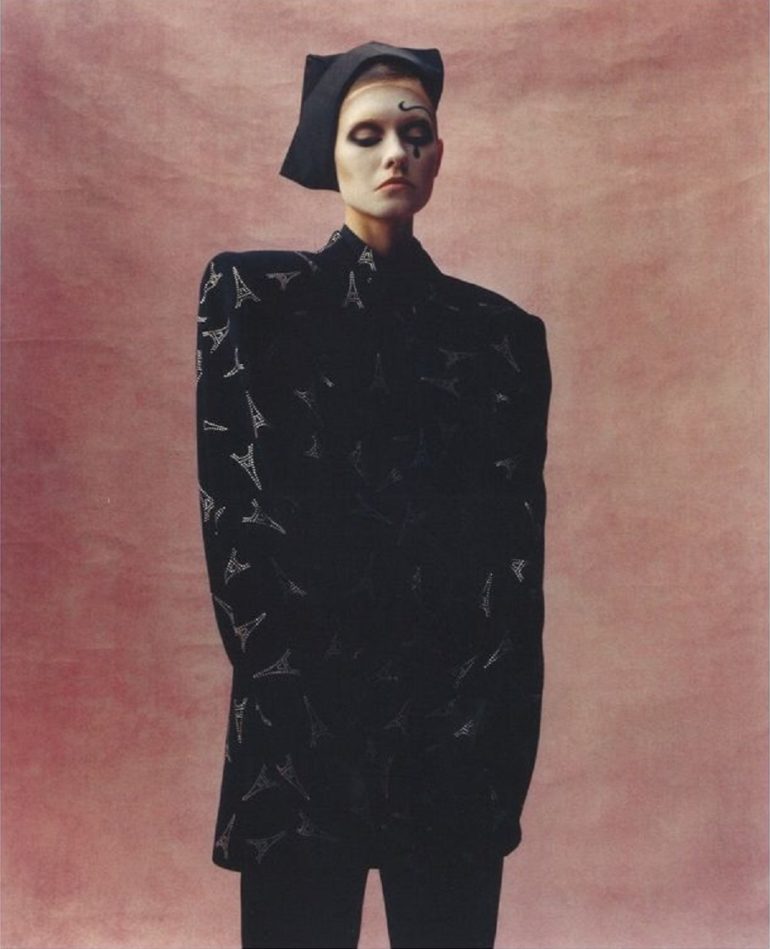 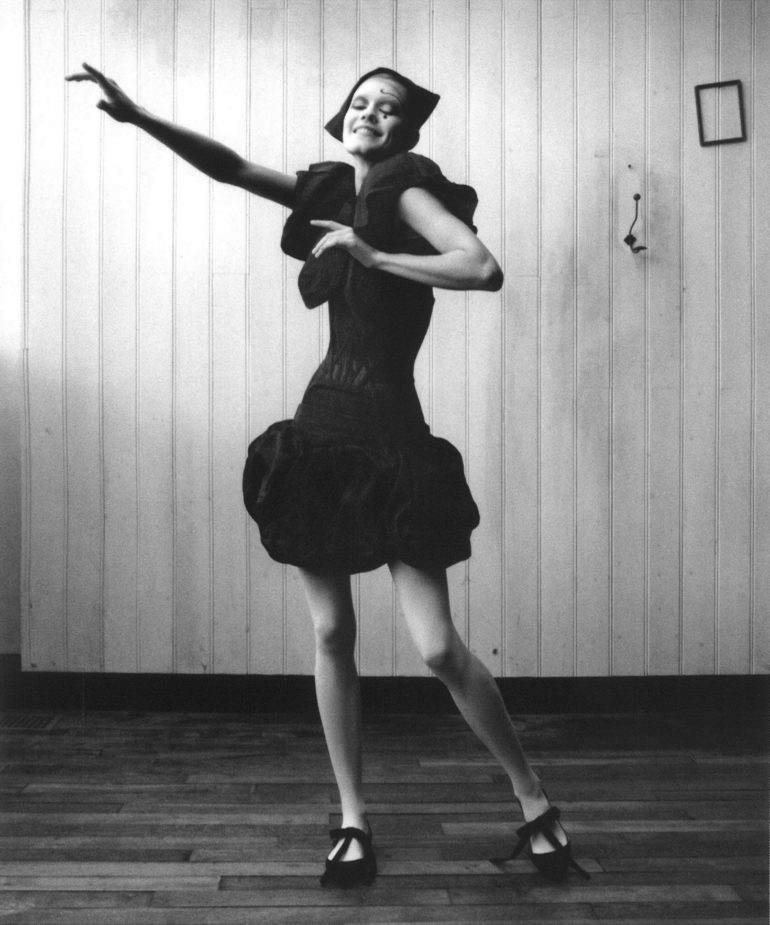 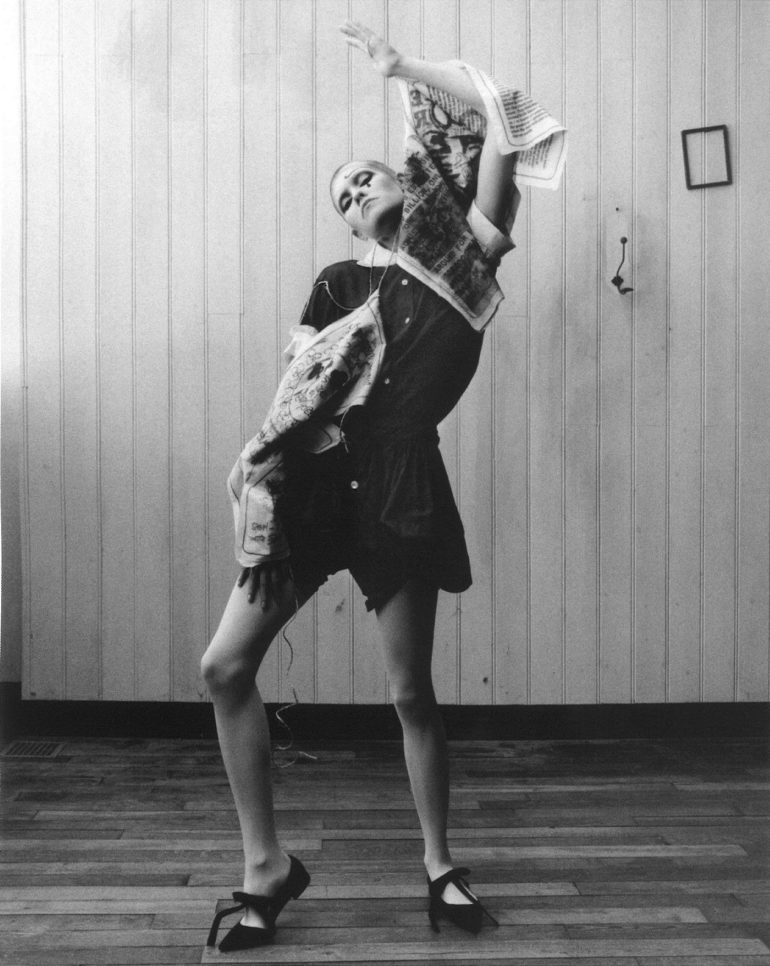 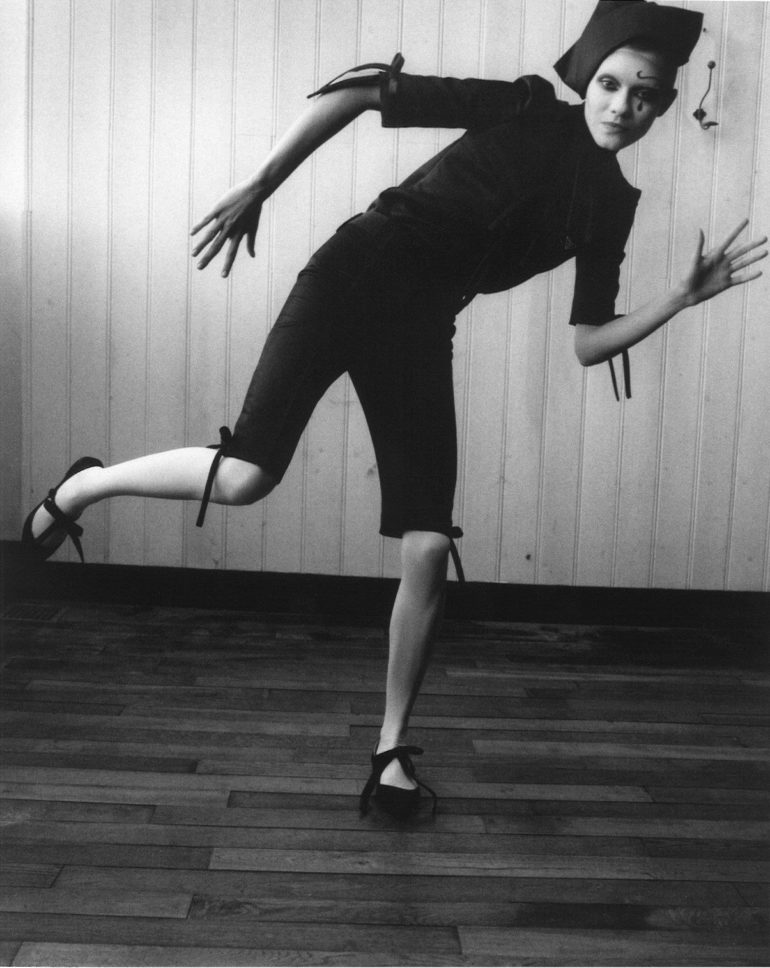 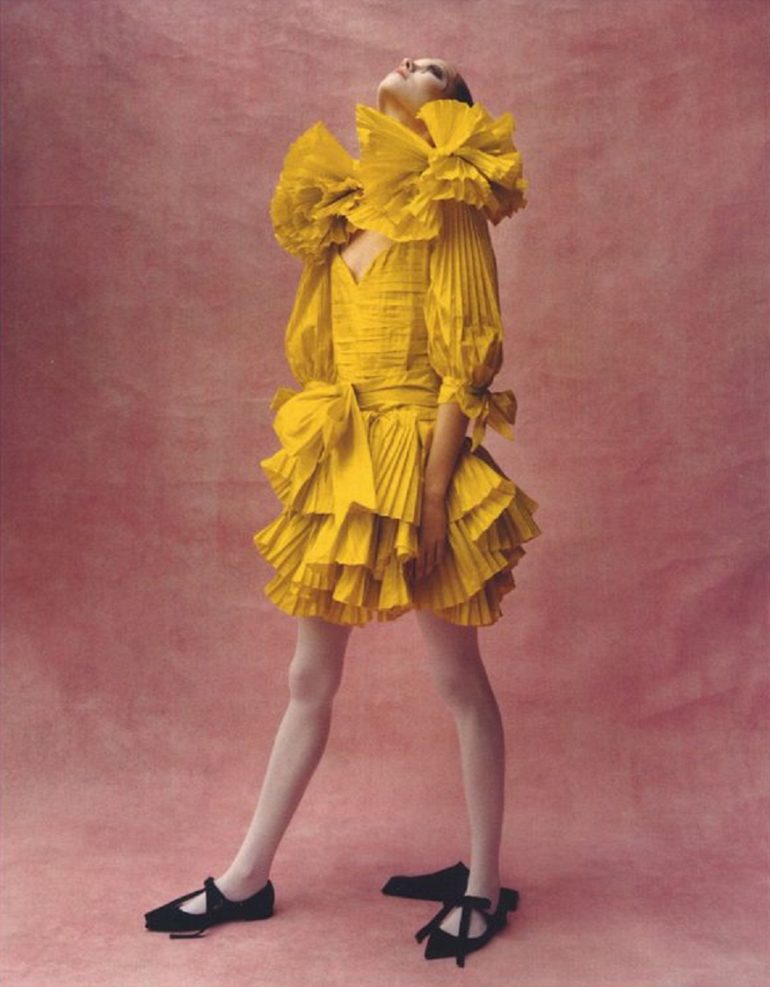 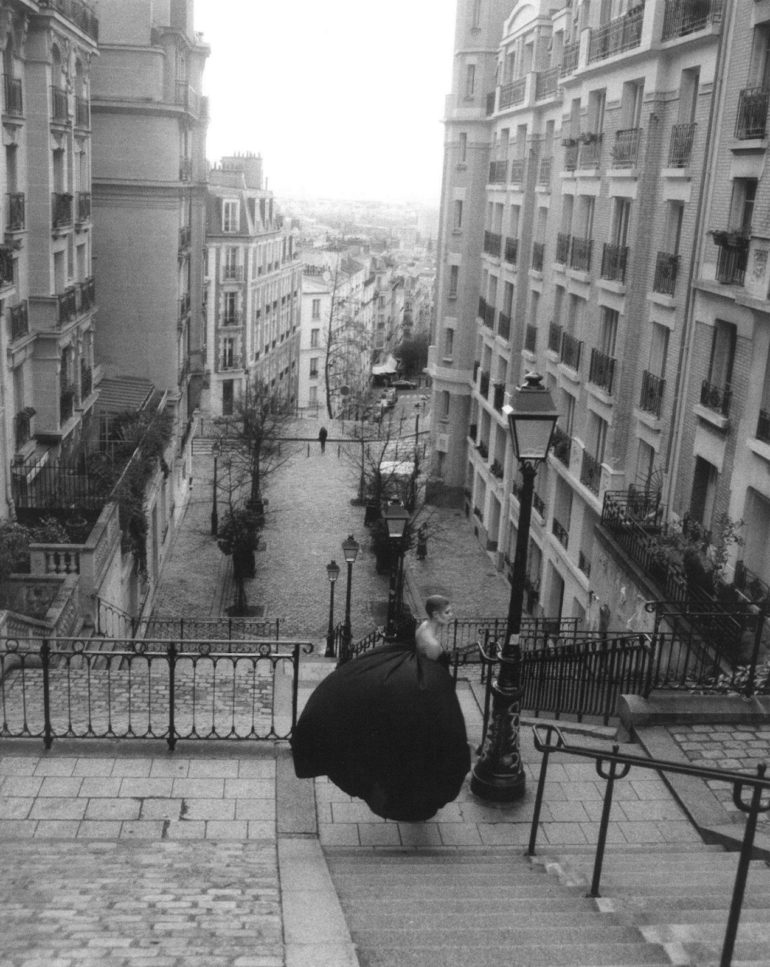