Jazzelle Zanaughtti falls into the fluid shadows as she flies into the light in “Hallucinatory reality” shot by Warren du Preez and Nick Thornton Jones for King Kong Magazine, SS 2-19. Often hailed as a Pioneer in the Garment Construction Industry, Iris van Herpen has taken gorgeous to a global level. Fashion is fused with 3-D printing techniques, the evocation of which otherworldly artistry isn’t a new concept. Taken to a galaxy beyond, we ponder our place in the world. Through Celestial Cartography, we are able to study a mapping of stars within the celestial spheres. Van Herpen’s S19 garments were inspired by the star atlas, Harmonia Macrocosmica. This spirited artist became captivated by the idea of human-animal hybrids, as well as, mythological and astrological creatures throughout history. All giving her a unique perspective on the power of the universe… and beyond. Her work incorporates a sense of vision rising. Known for her erudite manner and intellectual prowess, the incomparable Iris van Herpen’s exploration of Celestial Cartography led her to the Map of the Heavens.

Iris introduced us to her Sculptural Couture Collection ‘Shift Souls‘ at Paris Fashion Week 2019. An artful revelation unfolds as each coiffured gown imbues a picture of paradise. This innovative artist was inspired by human-animal hybrids. “the mythological dreams of humankind since the dawn of civilisation are shifting to the canvas of science.” Van Herpen’s forward concepts provide a powerful portrayal of existence beyond ourselves. She believes that “the mythological dreams of humankind since the dawn of civilization are shifting to the canvas of science.” Known as a voracious researcher, who takes cues from many scientific, artistic and historic references. This forward thinker often hailed as a pioneer in utilizing 3D printing in garment construction technique. Read; Amy Verner’s write-up on this compelling force-of-nature. The graceful shape of these beautiful shadows celebrate the brilliancy of the light. Radiant inclinations offer silhouettes a powerful perspective, as this story is as much about the spacial configuration as it is stunning styles. Folds and pleats fall into each other inspiring them to simultaneously fly… as billowing fabrics are cast from indeterminate angles giving rise to designs that shine.

This dutch designer is known for ferocity in the world of fashion. Instead of standing on the sidelines, she chooses to embrace the technological advances we, as a people, have made. Thereby, creating a space for high fashion to be apart of the synthesis of design, expansion and creation. She seems to stand by the credo… that to make room for the extraordinary one must castigates the common. This obliterates the conceptual notion of faux philosophy… she makes no room for fake fashion. Iris van Herpen delivers high design that stretches the mind with fabrics that moves in unfathomable ways. The linear movement lingers in the moment as if cradling in the hands of some higher force. To foster true creative growth is to get your hands dirty. She doesn’t, to me, seem to be a woman waiting for the end result. Instead she is a part of the experimental process. Your true artist understands, in the arena of the unknown is where new ideas are born.

Jazzelle’s masterful performance honors the personality of each piece. The fluidity of fashion moves to it’s own beat as each dress seems to defy the laws of nature. A fusion of fullness speaks, as this kind of style synthesis speaks to the connective force of humanity. Somethings moving as something else changes course. To watch this collection unfold is to witness humanity morph. Transformation takes hold allowing shapes to collapse and then to be reborn. Fashion art is an ever moving process. Silk sweeps over her body and fans out like a peacock extended. The arch of her arms provides a high point, where billowing pleats seem to float in the air, and then cascade down the arm. The stanzas rise and fall like a concert mid aria. Pausing at the height colors gives rise to the light. Drawn into each note we are mesmerized by the raw power. Succulent shades seem to fade into an ethereal stance as a parade of pink/purple/yellow/orange collide. Cuts and bends capitalize on the colors making this a heavenly presentation.

Her skin… her lovely skin drinks in the light as it slowly emits a glowing hue. Alex Box embraces the modern elements of Jazzelle’s face by creating makeup that melts into the skin. Her lips and lids have been but merely touched by color, leaving her eyes alive with a fire from inside. Martin Cullens creates braids that are fit for a roman Goddess, as they sit atop the head like a Grecian crown and then wraps around the front like a leafed wreath. Jazzelle showcases one of this season’s standouts, wearing an incredible application from the line’s face jewellry, “Cellchemy.” This may appear like a common piece of applied artistry designed to fit any face. However, you may be surprise to find “scan data was used to map out a shape locating the shifts in density and contours of the face.” That’s remarkable! A high-resolution, multi-material 3-D printer is then used to create these magnificent masks.

I imagine Iris’s grand atelier a place where dreams are made. Hers is a world where craftsmanship and technology collide. That may sound basic, but she honors her connection with the fabric, and by extension her dedication to design. 3-D printing is merely a step in that process. It’s easy to see the end result and get captivated by that concept. Technology can be an enticing prospect. But, it’s merely a step in the process. Iris van Herpen speaks of the setup her courtillier takes. One might expect this phenom of futurism to take unique steps in her process. Instead, however, we find that she follows a rather routine program. The Spring 2019 Collection brought forward a fusion of fabrics that gives the viewer a unique perspective of the stars. 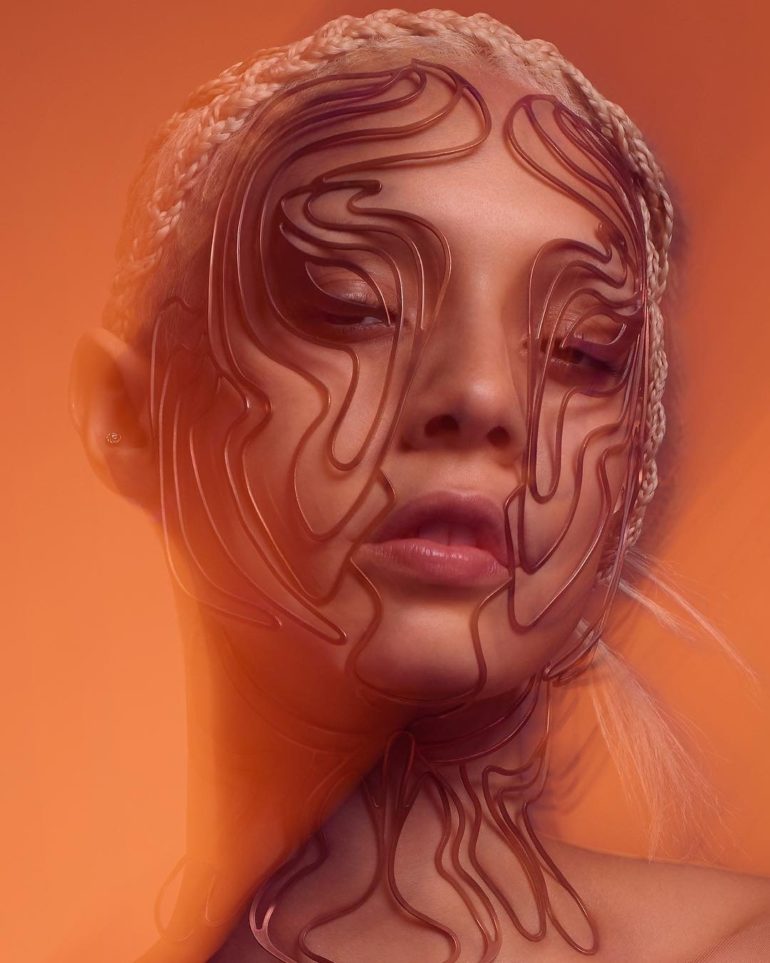 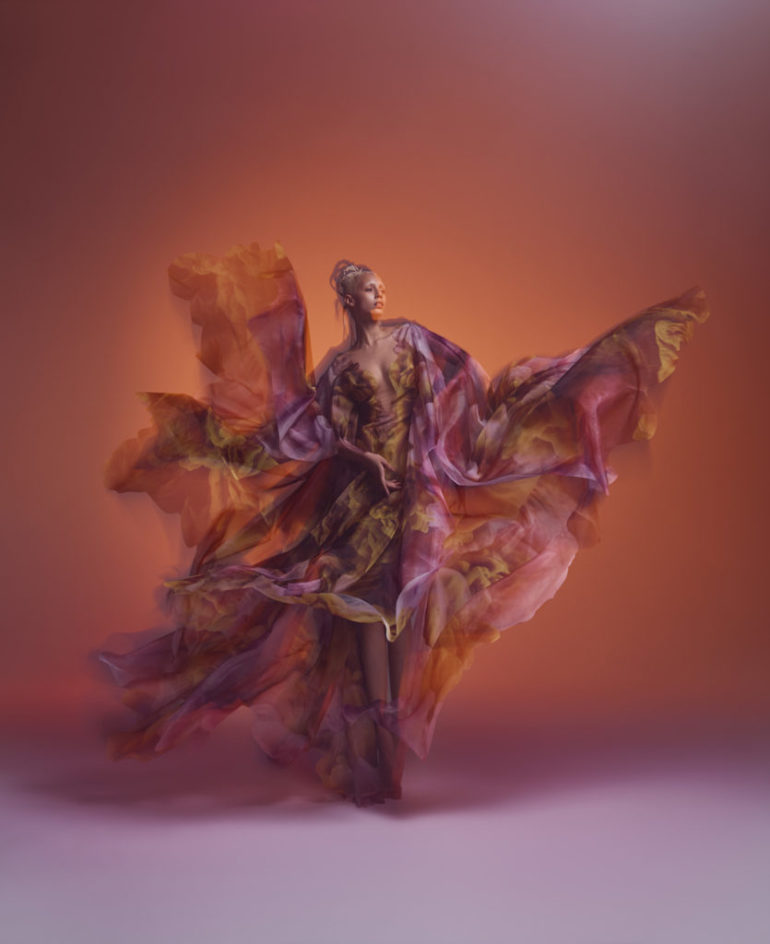 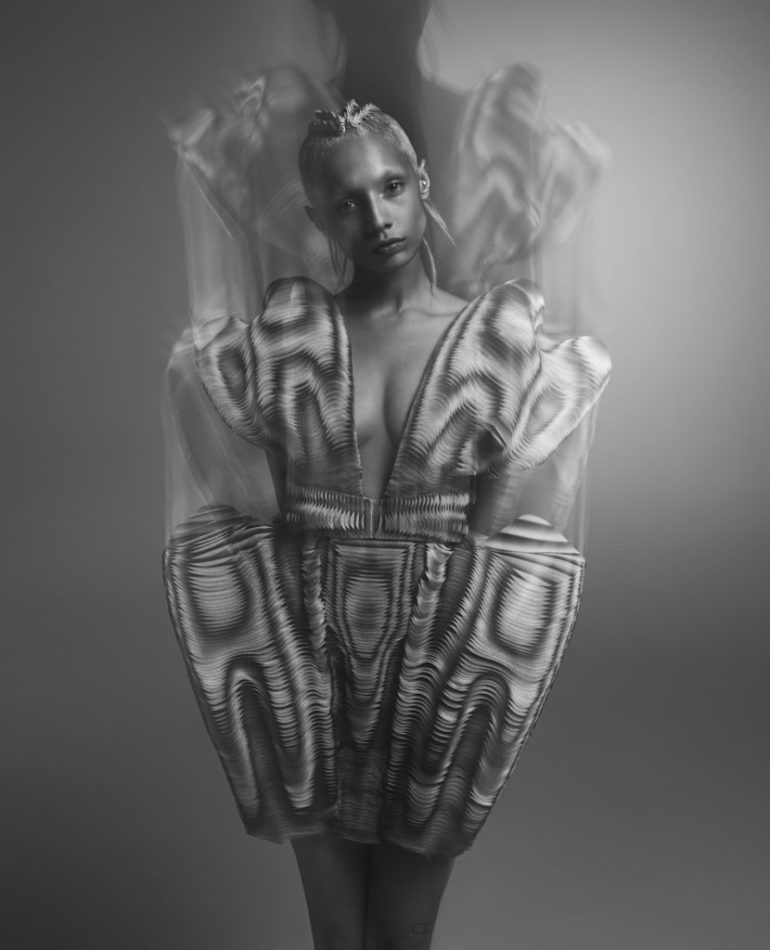 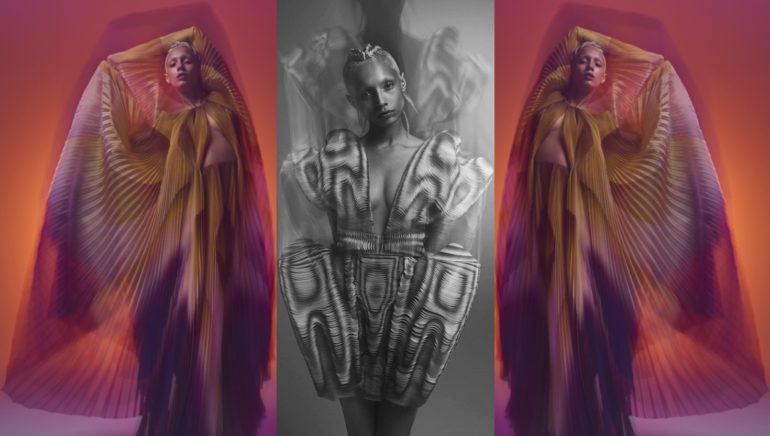 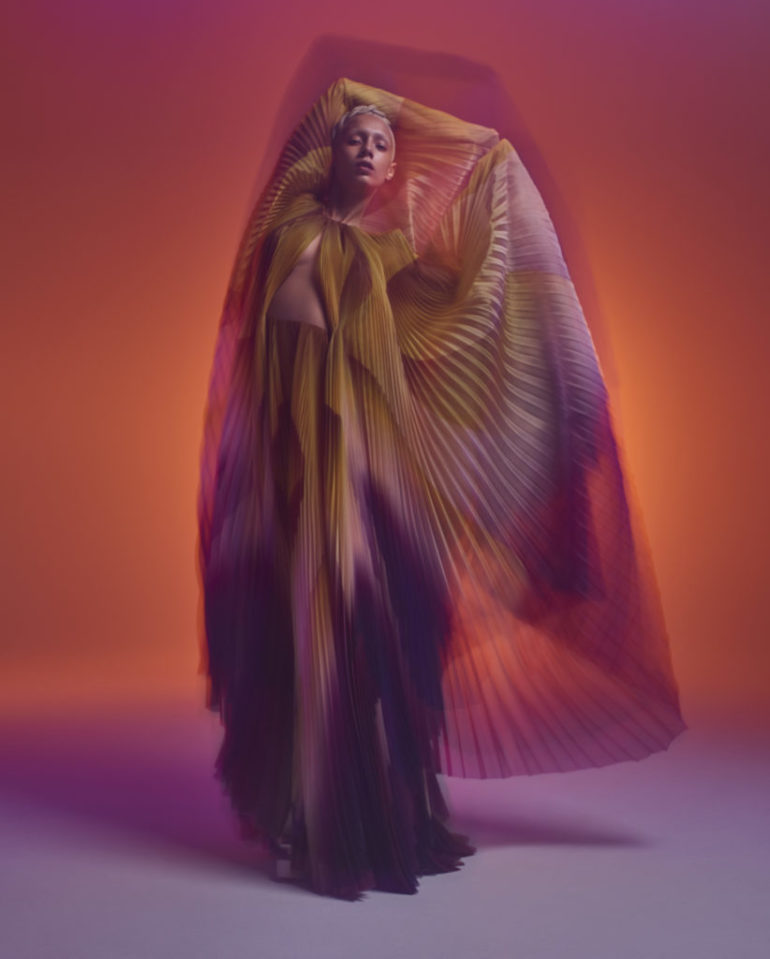 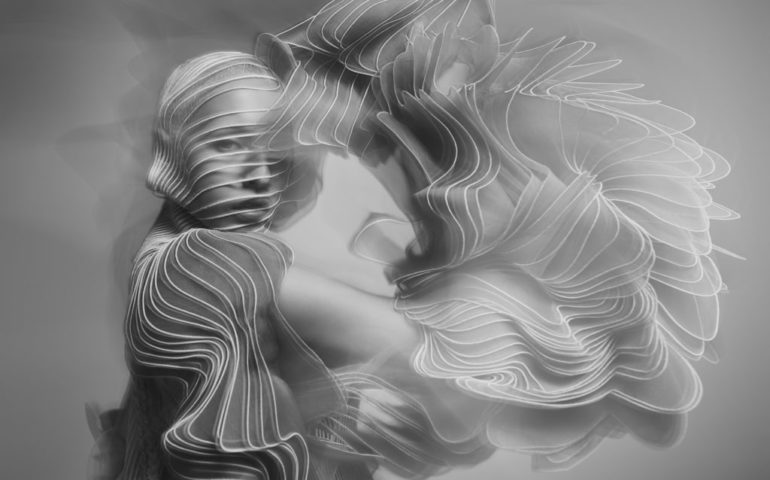 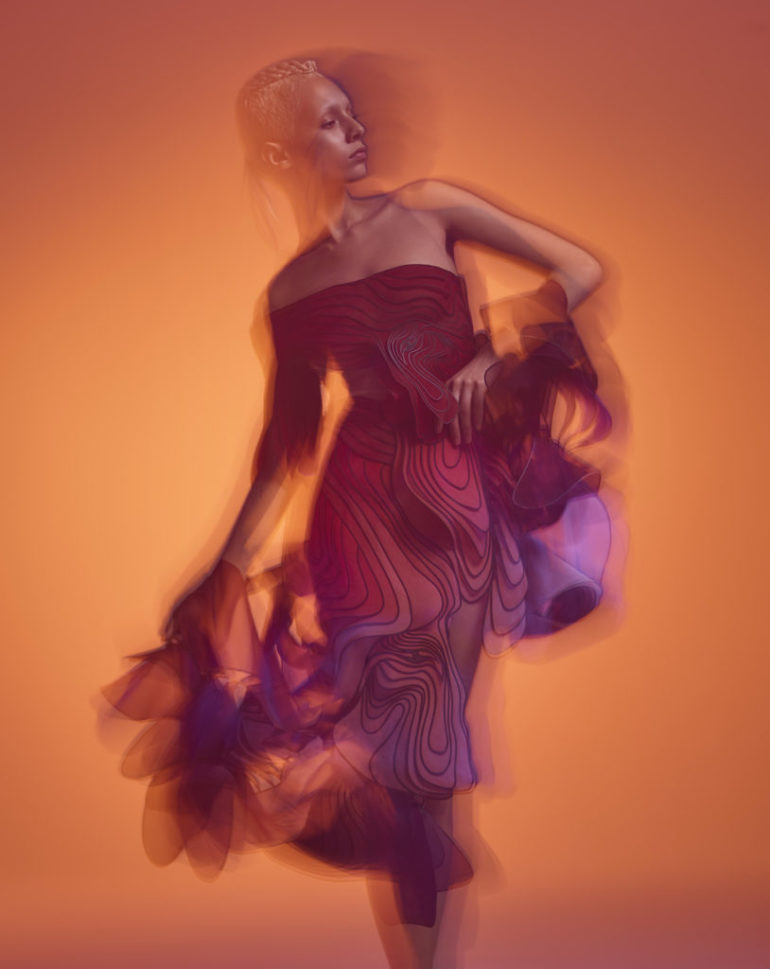 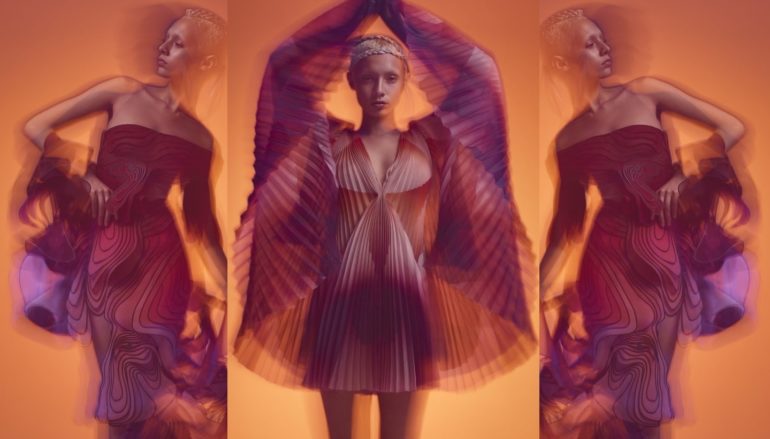 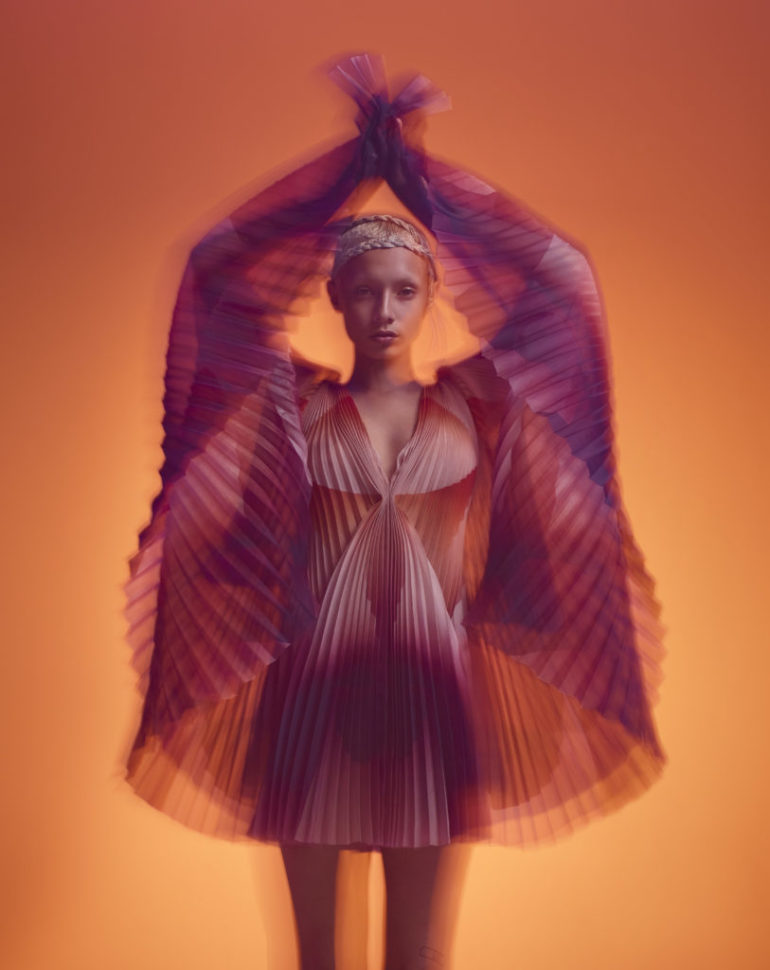 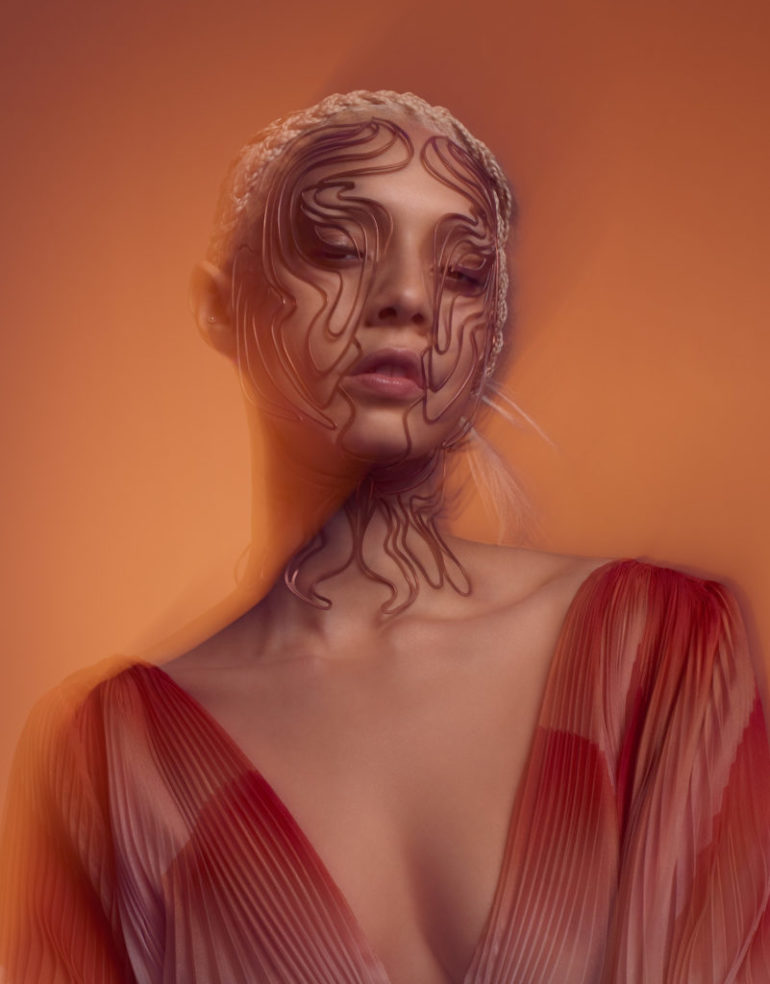 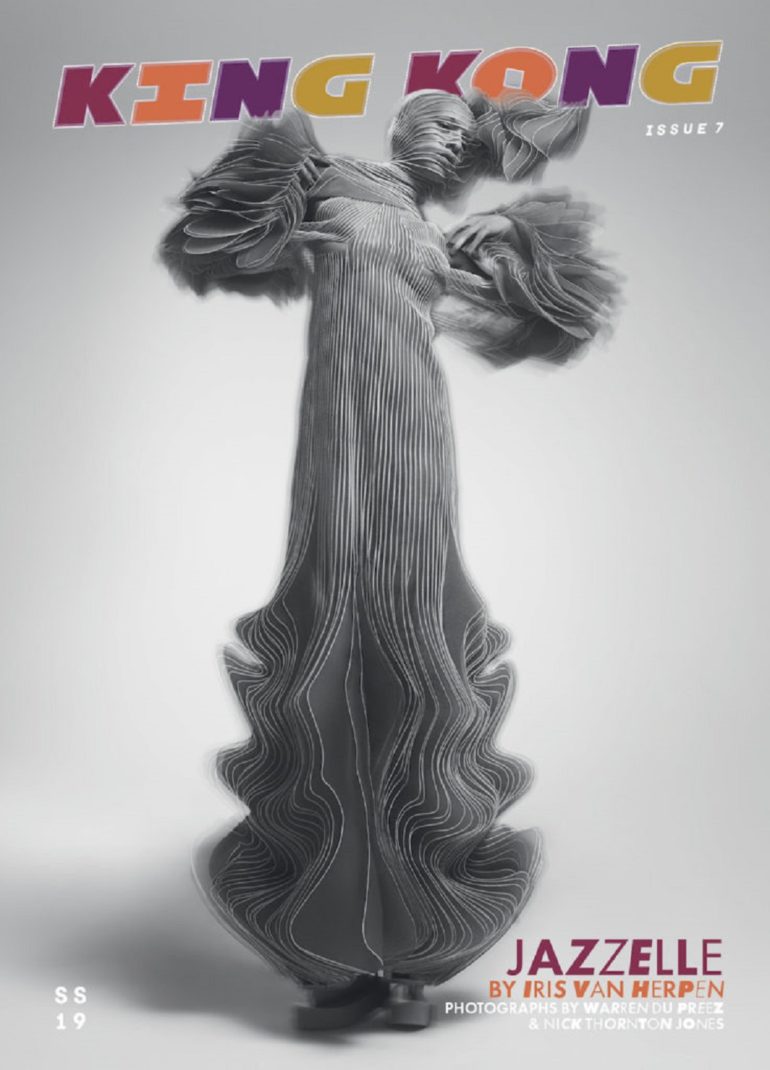 Sarah Brannon Dives Deep in a Sea of Double Exposure

Milou Sluis Through the Lens of Illusion 'Dreamland'