Krow Kian shares what it means to be authentic by Elizaveta Porodina for Numéro Netherlands 01. Some may think this not an appropriate venue to focus on Krow Kian’s incredible journey of discovery. Too bad. I see this story as a stop at the center of a brave voyage. This Fearsome Transgender Model shared his triumphant journey, as part of a documentary. ‘Krow’s TRANSformation follows a model’s transition from woman to man. For three years, first-time filmmaker Gina Hole Lazarowich followed Krow Kian as he transitioned from female to male. “Krow’s TRANSformation” captures Krow’s first hormone treatment, to his decision to continue modelling as a man and eventually walking at Paris Fashion Week.’ Making history, for Fall 2019, he became the first transgender model to close the Louis Vuitton show. This isn’t about the art of androgyny, it’s about the art authenticity. There’s no braver endeavor to undertake in the course of humanity. Bound by Light… Set in Sight… So is the Story of Beauty Brought to Life.

In the festival of frolic we stand on the sidelines and scream. This is a story of a sentimental journey. We watch as each image is alive with a kind of new narrative. It’s is about a transition that leads to a transformation and a revision to a revolution. This is a celebration of change. Lisa Jarvis styles us into another dimension, where designs come alive with a sense of pride. Bold takes hold as neo-nostalgic sentiment is touched with a forward fusion. Solid shades stay close on the color wheel, with primary tones such as red, blue and yellow. Erol Karadag comes in with a cash of hats all color coordinated to match. In the same trio, a pillbox bonnet with a strap that attaches around the chin, has a flat top with crystal, encrusted embellishments. Fascinators get the name for a reason, as a black, asymmetrical hat weeps with silken sweeps. Haute hats are done in dramatic form with anti-sculptural efforts being part of the themes. In some shots his hair is simply combed back, and sometimes gelled into place. In his grande finale Kian claps his hands together causing powder to explode, as a cloud of white ejects into the air.

Laramie, brings a wealth of experience to the page, having worked with such greats as Isamaya Ffrench & Tyron Machhausen. Straight off, what I appreciate most about her process is the way she manages the experimental aspect of her application. Avant-garde expression is best accepted when it doesn’t try to steal the attention. Rather it fuses haute couture/coiffure allowing the artistic makeup to take shape. The more exquisitely extreme the application the more it requires a genius strategy for show. Laramie creates a Pierrot – a male character from certain French pantomime. Here, the visual beauty of poetic pantomime is artfully captured. The makeup appears more like the classic, European faces, often thought of as the most majestic and beautiful. Like the Pierrot or Harlequin of commedia dell’arte, this makeup isn’t made to be a joke. It takes on a theatrical tone, avant-garde in spirit, and sends it into the stratosphere. Jumping off the white backdrop, the features are prominent. The eyes are dark creating a deepening of the spirit, while the cheeks are distinctly rosy as the lips take on an orangish hue. It’s strange. There’s a subtly to the extreme that makes the story so relevant. Details are done with such discipline, we are reminded that true beauty rests in the eye of the beholder.

Looking through rain soaked glass we see the spirit of Pierrot reflected back. He wear’s a Pierrot style collar, often called a Shakespearean collar, with neck ruffles that provide a powerful statement. Kian is a compelling character. Emotions exude out from him. In many of the pictures he portrays power with his body, while holding his hands up to indicate passion. This is passion exhibited, not necessarily felt. That becomes an interesting point of distinction. There’s a strong sense of sentimentality evocatively expressed throughout his performance. The poetic detail in the drama is displayed, but the emotive outreach is unclear. We aren’t clear if these feelings penetrate his being. A fact that makes this story so stimulating. A master of tremendous technique. He balances balls over his hands like holding glass in mid-air. So graceful is every movement, it’s like watching a piece of brilliant ballet. As you peruse each picture it’s clear that under all the makeup lurks a sea of sadness. In one of the most exquisite images of the season we see his eyes turn to many. Two eyeballs turn to eight, overlaying the face and creating a multi-dimensional image. I call this a trick inside a trick, in what appears like altered photography. The application isn’t digital but manual. When is that ever done? When first viewing the editorial I wasn’t sure what I was seeing. And, that’s what made it so delicious. This is like watching a play, touching/triumphant. Subtle sweeps of sadness make this evocative art an emotional animal. 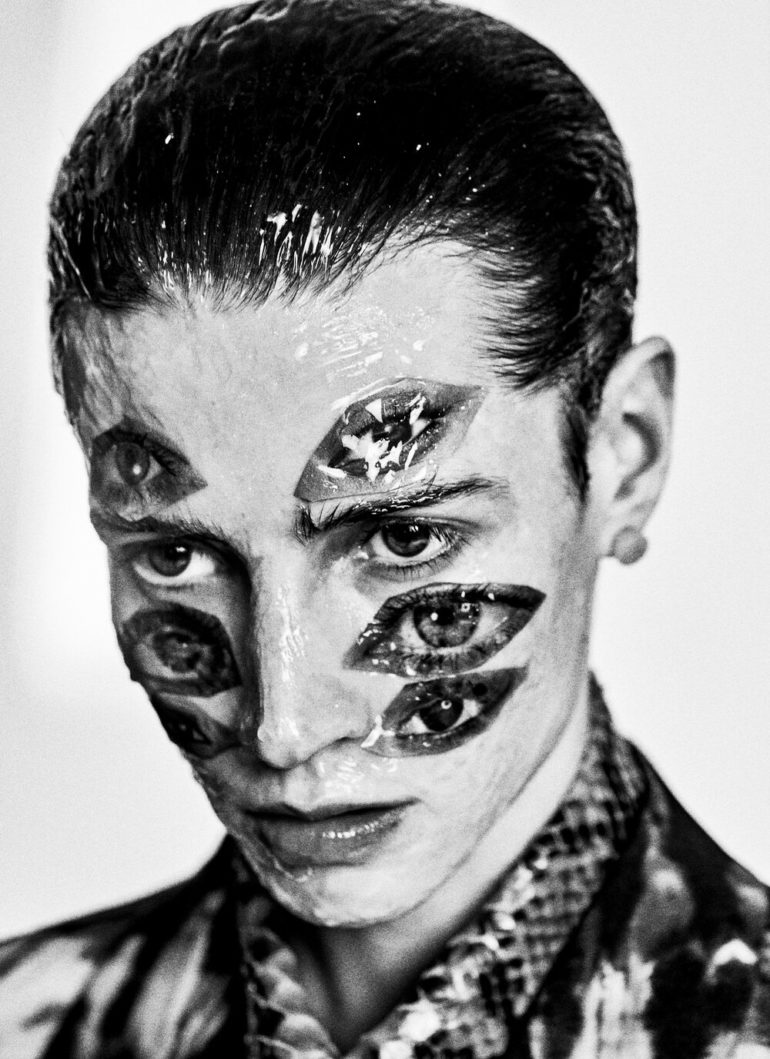 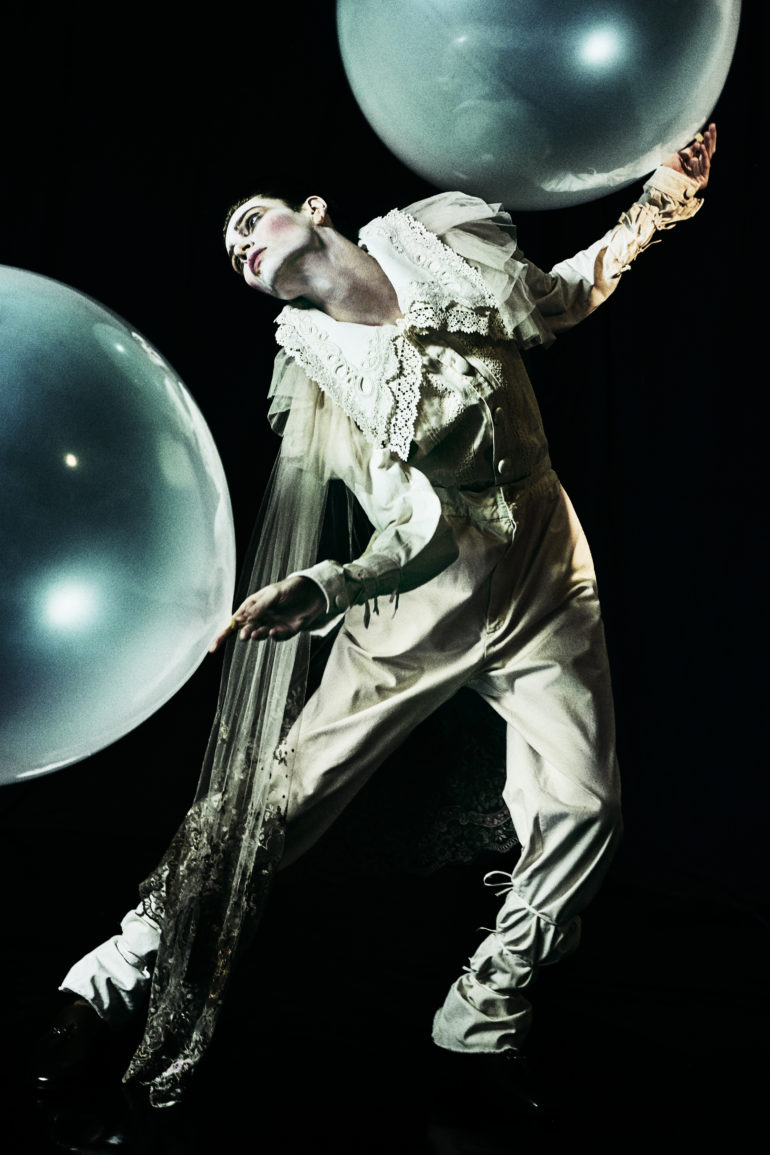 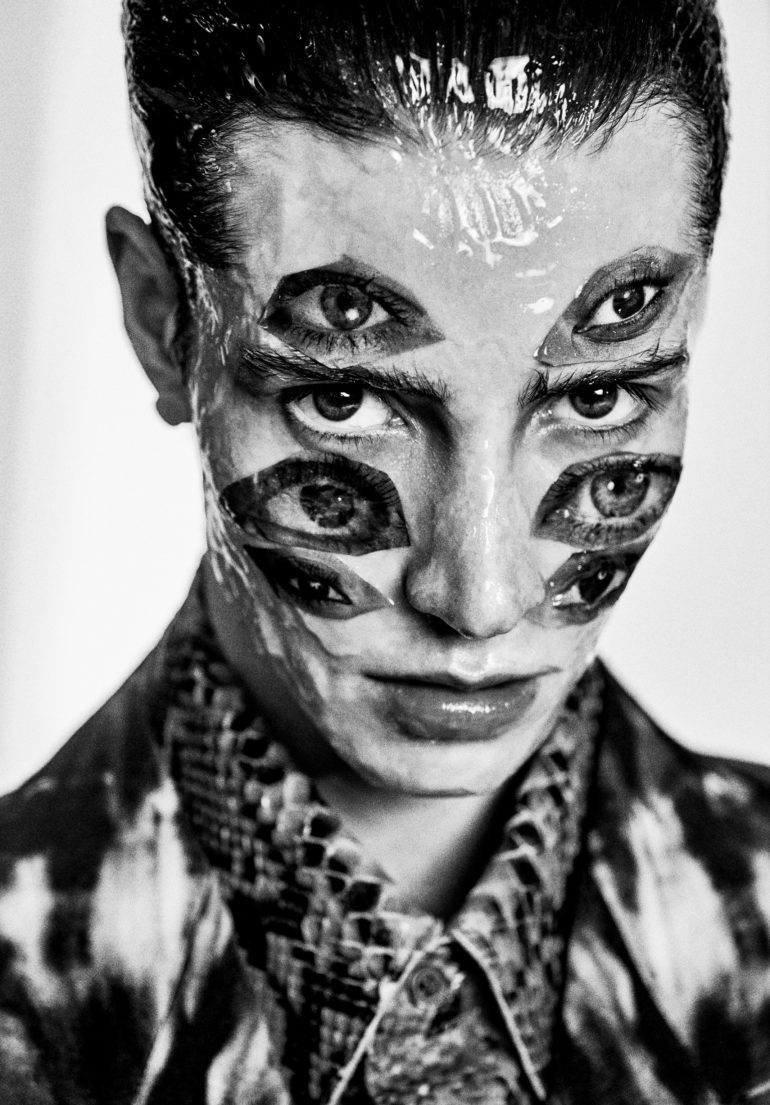 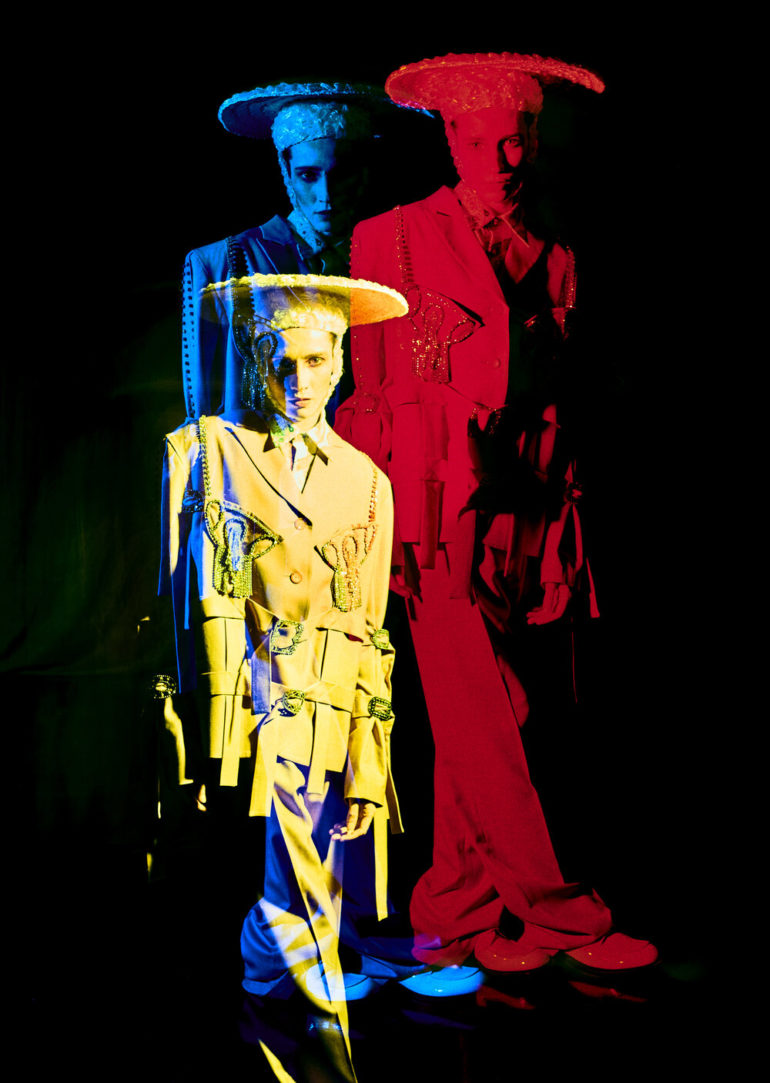 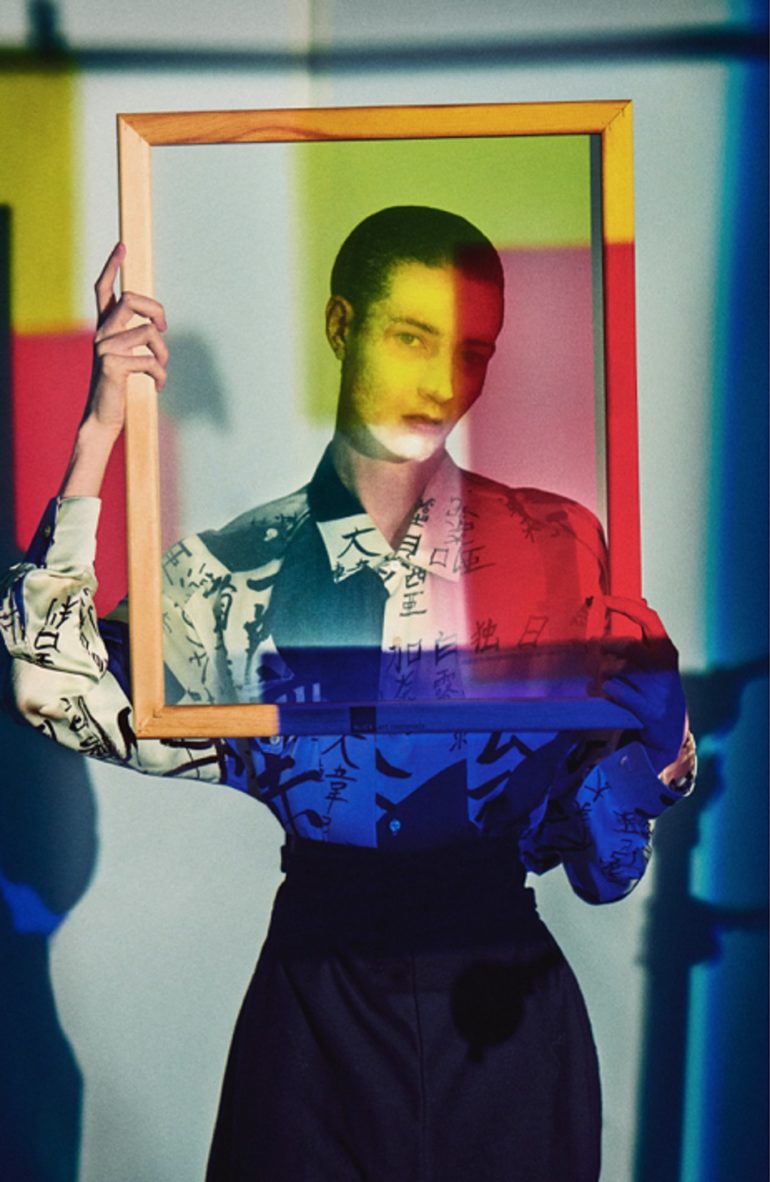 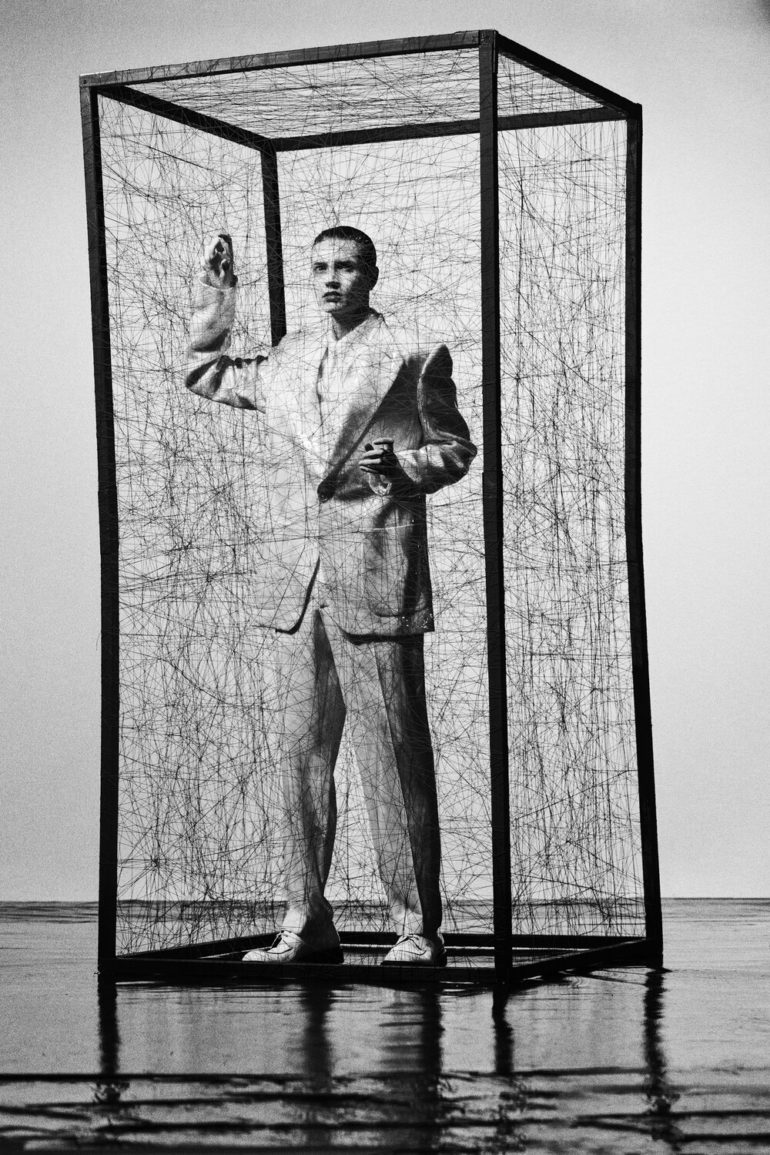 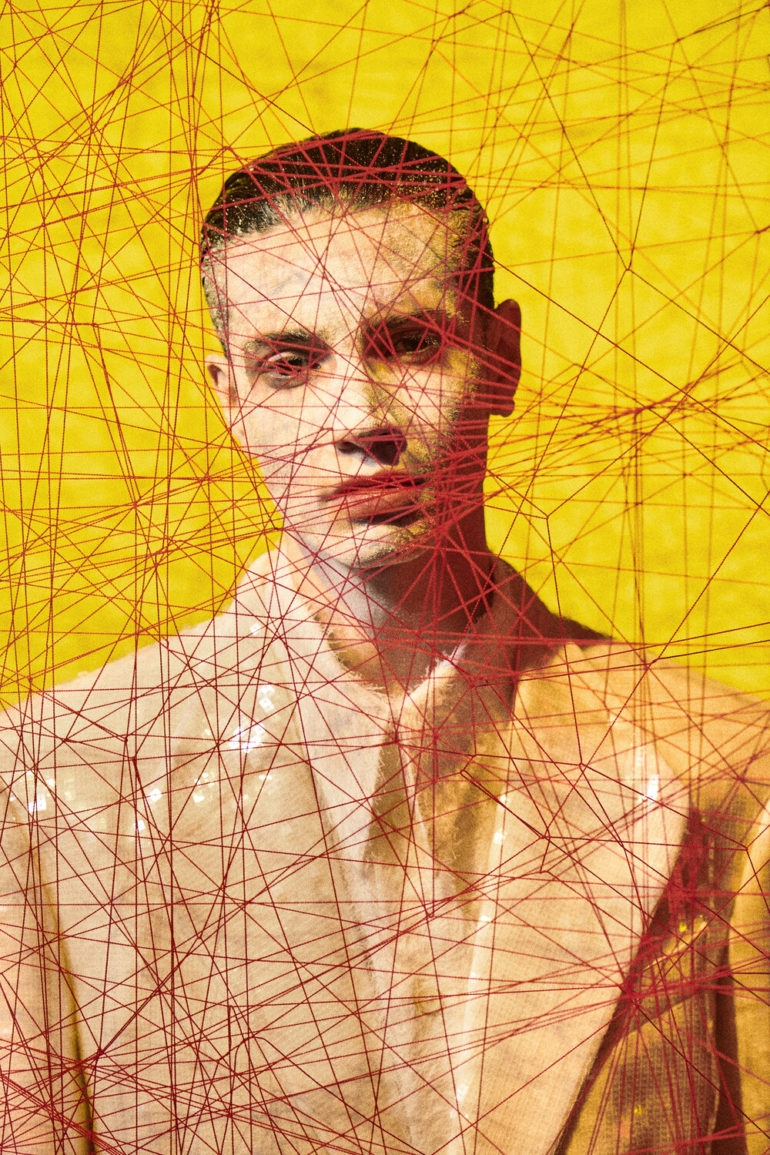 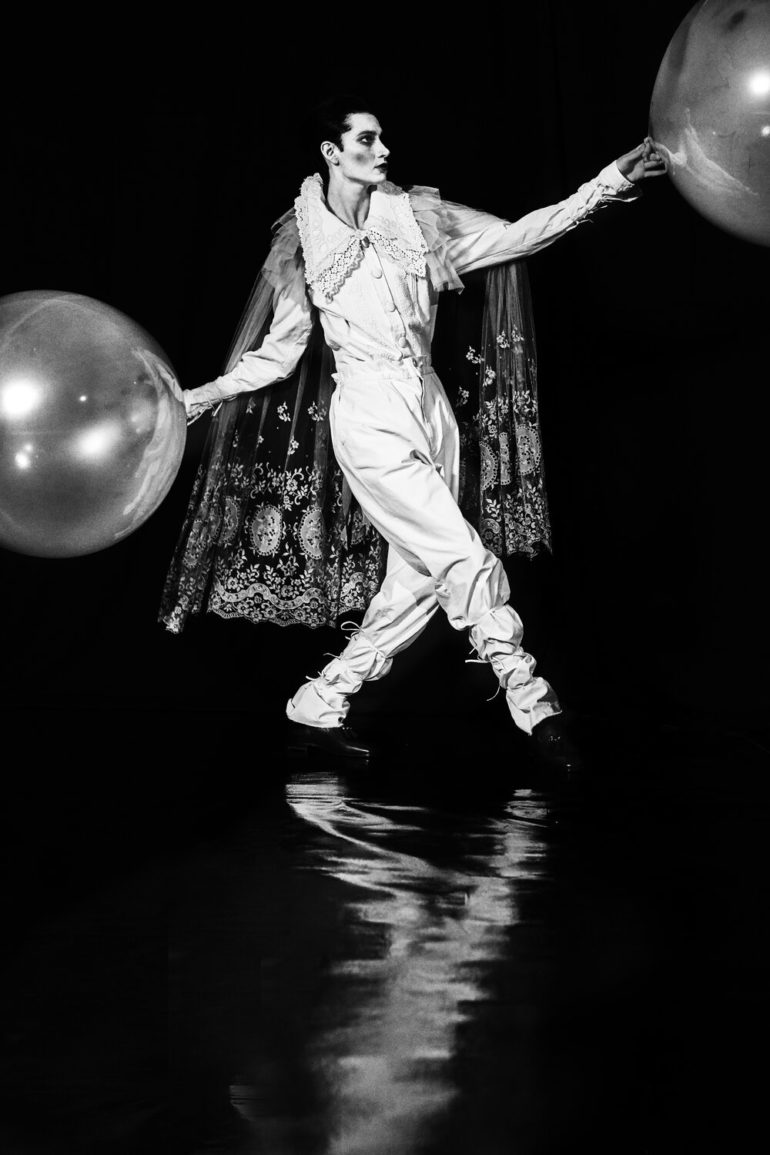 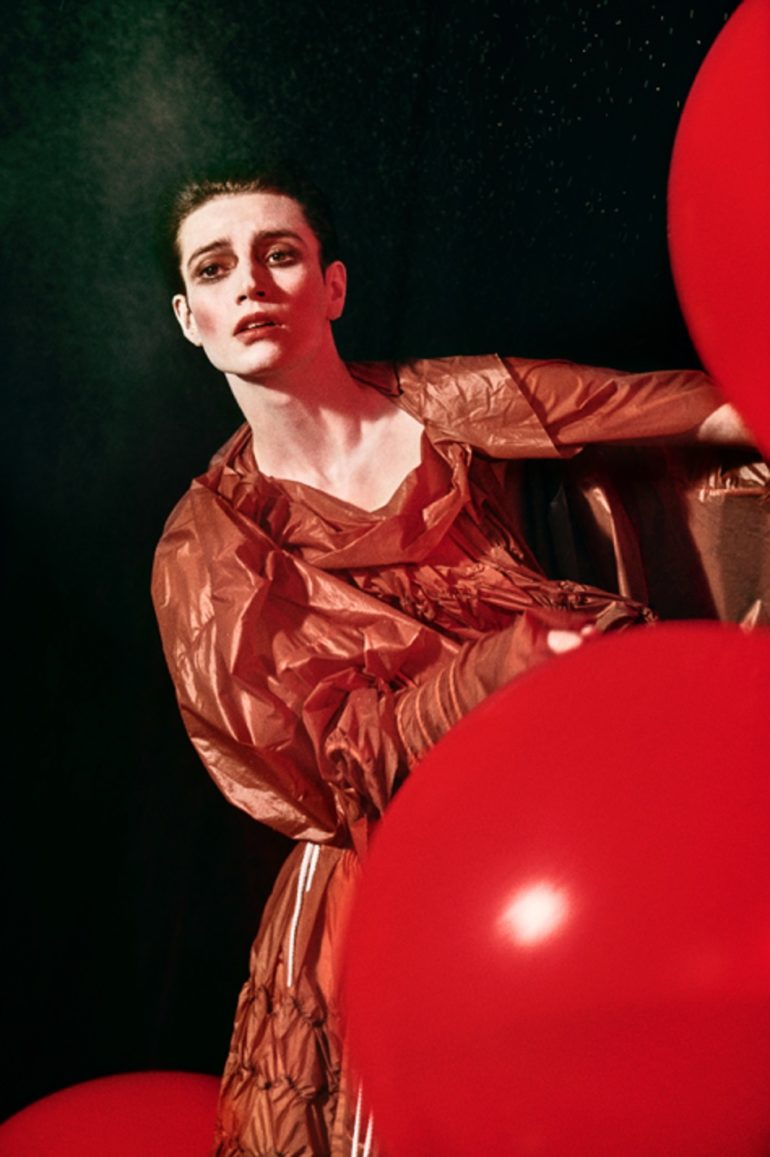 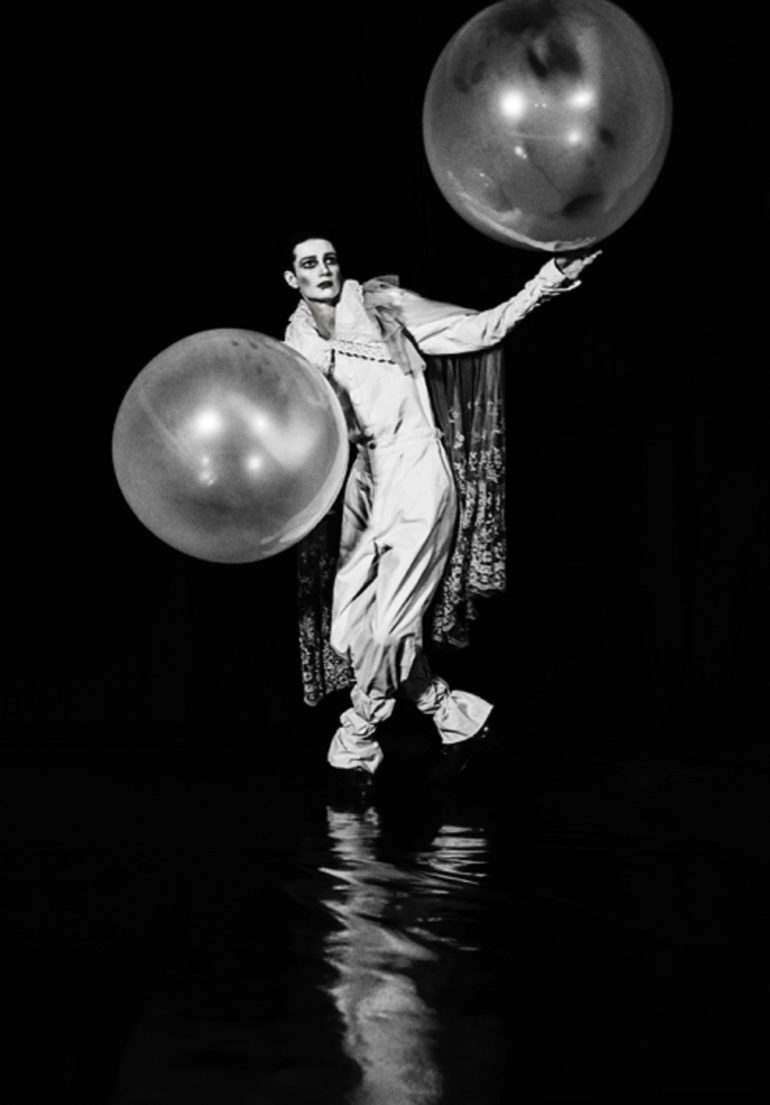 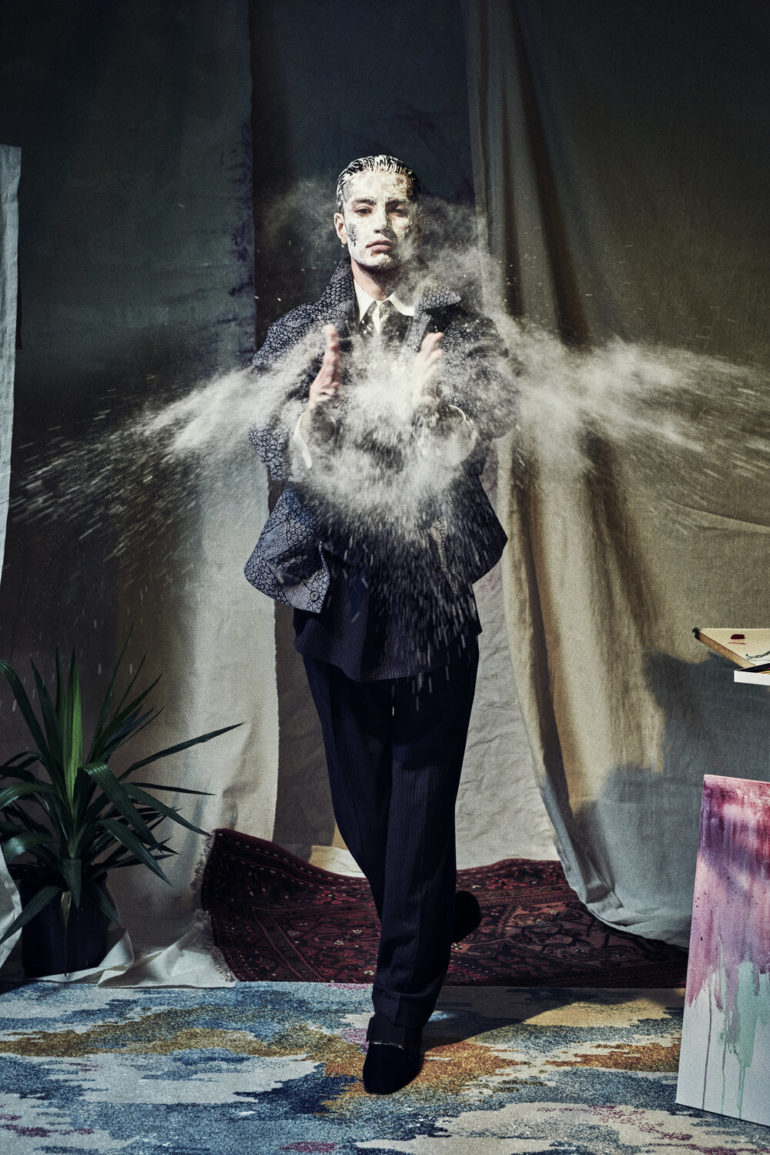 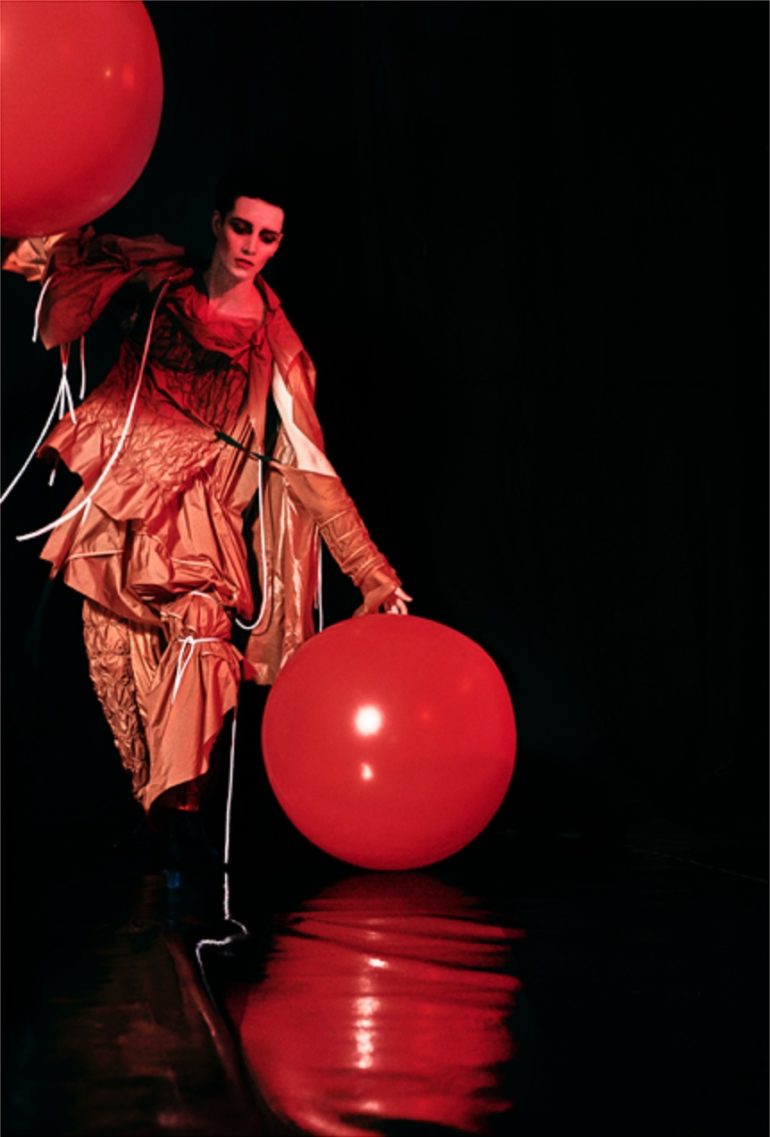 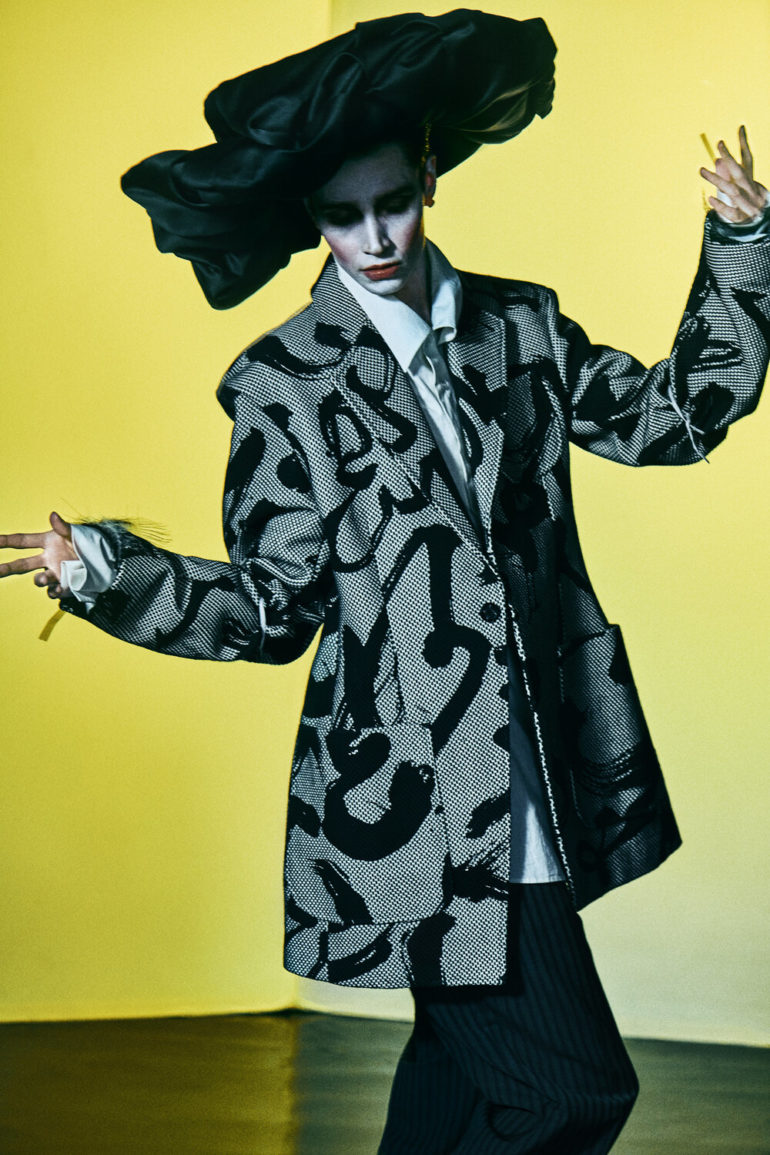 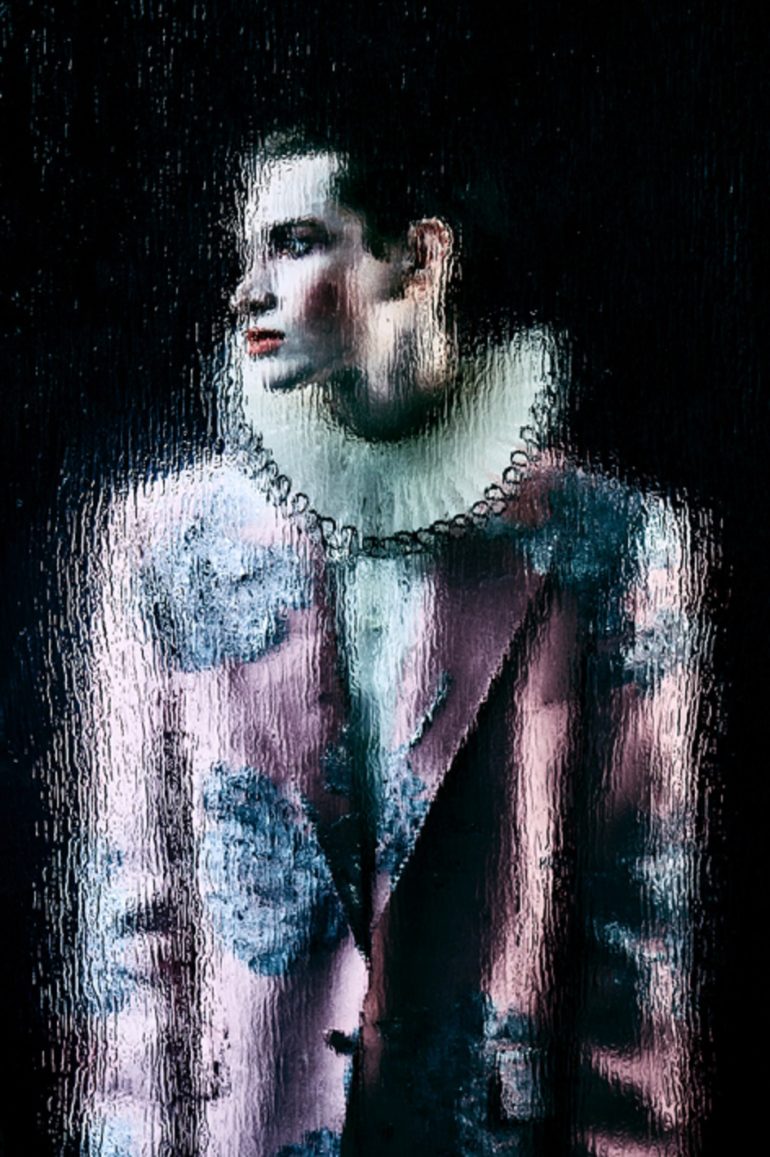 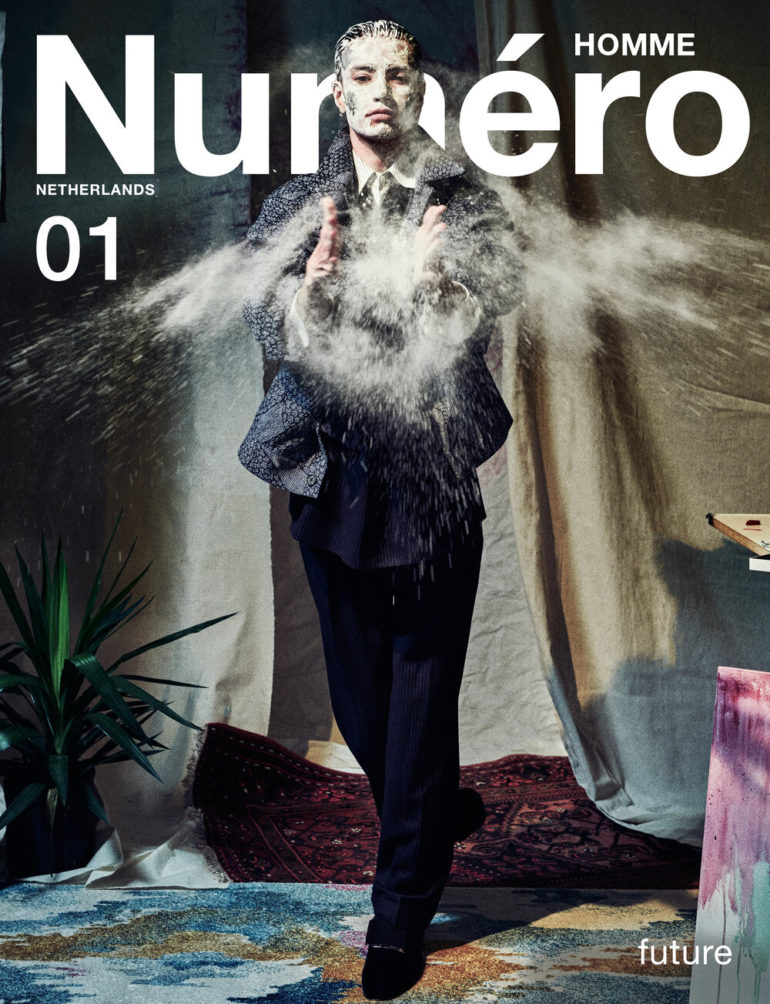 Like a Moth to a Flame ~ Seduced by Sara's Fiery Game