Yasmin Wijnaldum stands in the center of this storied ride with each costume giving the effect it’s rise. Nick Knight draws outside the lines of lunacy in ‘Hardcore Romance‘ for AnOther Magazine A/W 2019. A DREAM THAT ISN’T FAUX… A STORY THAT’S NEVER OLD… A TRUTH YOU HAVEN’T TOLD…. AN ILLUSION WITHOUT BEING SO. This tactile tale reminds us that anything is possible. Wish It and It Will Be… Your Imagination is all you’ll ever need. The algorithm of antipathy is transformed into the rhythmic sorting of the integral spirit. The mind leaps and the spirits speaks. Inviting a high reckoning of that warrior-spirit. A calling of the creative shows the scene in serendipitous form. Various elements discern between high art and sheer expression, as truth is unveiled in new and surprising ways. Talent takes to the stage as ingenuity is released in a righteous rage. Hovering over the lunar landscape of synergism her body trembles with anticipation. Alive with pride she takes an expansive leap toward a new world. Is this individuality fighting against the mainstream masses? Or is it a bold move forward? A collective kind of neo-madness takes hold as innovation and evolution explode. The apparatus of the ingenious is unleashed as Nick Knight takes us into another world.

Ib Kamara has an eye for transformation. Literally, turning common pieces into object’s d’arts. Nothing is off limits as we enjoy the fruits of creative labor. Avant-garde is a mixture of fashion and art. Simple items used for every day purposes are transformed, taking them into a state of otherworldly appeal. Mundanity begone as this story is made to move. The banal turns to beautiful as mental mayhem is transformed into works of mindful expression. Art evolves before our eyes, changing the banal into the beautiful. Structure stays mainly the same, while altered application is the name of this game. Yasmin conforms throughout each pictorial scene like an actor on the stage. Decked into another dimension, her transmutations takes us through a variety of vibrant changes. Each design is less about product placement, more focused on fashion symbolism. In one layout she stands above the many men laying down below her, all wearing a sheath dress that covers a full suit. A metamorphosis in the making, this says something about the power of the Feminine Spirit.

Let’s take a Pregnant Pause. Enlisting the mind of Knight to embrace such a stellar cause, is a victory for women everywhere. Watching men portraying women, on their backs ready to give birth, is on it’s face a stunning accomplishment. High art heralds a new day with messages told in new/confronting ways. Creativity isn’t meant to be visually convincing, more a metaphor on modern living. Subtle tones are captured with a masterful touch. There’s a clear subtext that embraces the historic struggles of today’s feminine heroine. This Is the Story of Us. Tales told of mania mixed with an abject longing for human touch. We witness this within the realm of the creative endeavor. Yasmin stands in the center of what looks like a circle of pregnant people. Understanding that this is a mind-bending mix of reality. Compelling fashions come into play as full suits are worn under a tight, white sheath dress. Portraying a protruding pooch on a man is beyond brave. This projects a sense of symbolic harmony. Trading places never seemed so complete, as we watch the individual at the center of the circle rise, while the surrounding souls fight to keep above the tide. This is the story of… What If? The Men’s Belly’s Belie the Truth as We Take a Collective Trip Down Fantasy Lane.

Thom Walker does a phenomenal job combining avant-garde cosmetics/couture. Matchy-matchy it is not. Instead his beauty bends as Walker blends a bluish hue over Yasmin’s eyes. Watching her face mutate from magenta to green and all things in-between. Pretty and preppy clash as her skin reflects the many eras of distinction. The only discerning detail that is unlike a theatrical setting is the baron stage. Although the empty effect is compelling, the hallow walls do speak. There is no scenery, albeit, props hanging off bodies of the players. This set-up exists within the landscape of lunacy we spoke of above. Alas, they are standing in a sea of empty space. Background players unite all wearing similar outfits to form a spectacle of sight. White light bleeds in-between each body letting the beauty just be. As the only action taken is that which we can see. This projects a sense of symbolic harmony. Each individual is holding and/or wearing a number of unique items, the stage feels full. But, indeed, it is empty.

Standing through the seats the symbolism speaks. Making a hole through the plastic each man wears the chairs like armor, providing a twisted sense of nihilism. Every day items, not often seen in fabrics, are utilized. Pieces often passed off as unassuming or even unattractive are presented with a fabulous flair. All bent, curved and coiled like strands of helium hair. Haute-Hair invites light to shine by making a series of dynamic cuts, giving the dew a tremendous array energy. Jawara Wauchope captures a variety of coiffured shapes & silhouettes. All honoring the tone/tenor of each strand of hair. Much of the visual impact of the entire frame is done with eye defining drama. If I were to tell you that a skirt was made of green, white, blue and red plastic, appearing to be billowing fabric. Would you be interested? My guess is that you would imagine something prosaic. Dare I say simplistic. A dirty word in current couture. Instead this elevated editorial is done with a divine sense of creativity. Artfully exposed and willfully managed. Each beautiful shot touches all the boxes. Allowing the many modifications to melt into the backdrop. Ib Kamara captures these many distinctions with designs that range from Gucci, Saint Laurent by Anthony Vaccarello, Celine by Hedi Slimane, Alexander McQueen, Balmain, Hermès, and Prada. Fashion Art is a Revolution Inside an Evolution.

Stepping In Sequence Each Shot is an Opportunity for Expression… for Expansion. To that end, each shot doesn’t begin, nor does it ever end again. Instead, it operates like a moving image. The poetry of pageantry is present artfully echoing the absence of scripted certainty. Working in congress combined energy erupts. Projecting a display of power and play. Movements are not meant to monopolized the visual field, they are designed to defy the limits of the creative mind. The mind-muscle flexes as the body takes hold. This universal output distinguishes individuality from the cohesive center, allowing individuality to shine. Each shot amalgamation stretches the imagination. The eloquence of anarchy is captured in sweeping motions of many men wearing plastic lawn chairs, as if pieces of heavy armor. The war of the lawn ornaments, as it were. Plastic tubing is wrapped around the head, like a turban. Another piece covers the mouth/eye area with a final section sticking straight up, lifting off the head like antennas in flight. The men flaunt fragmented sections of limp pipe, like some kind of sword of ill repute. Simultaneously holding up flabby sheets of foam, used as a modern day version of a hoplon shield. Greek warriors they are not. But, oddly, they evoke a message of strength. These pictures are meant to portray a different kind of power. Mental Power. Boxes are bread on the head with a striped cone in the center like an elongated nose. Colorful garbage bags build up like plumes of plastic power. Touchable tentacles act like emotive anchors, as straws are sewn into a bodysuit, sticking straight out. Bringing in beings from another planet. It’s brilliant. Like Poetry Being Read… Words Aren’t Just Said, They are Voiced with Vision. 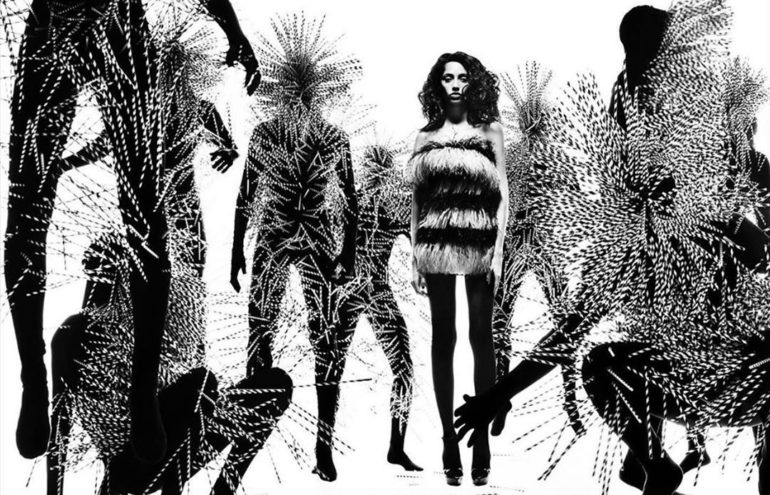 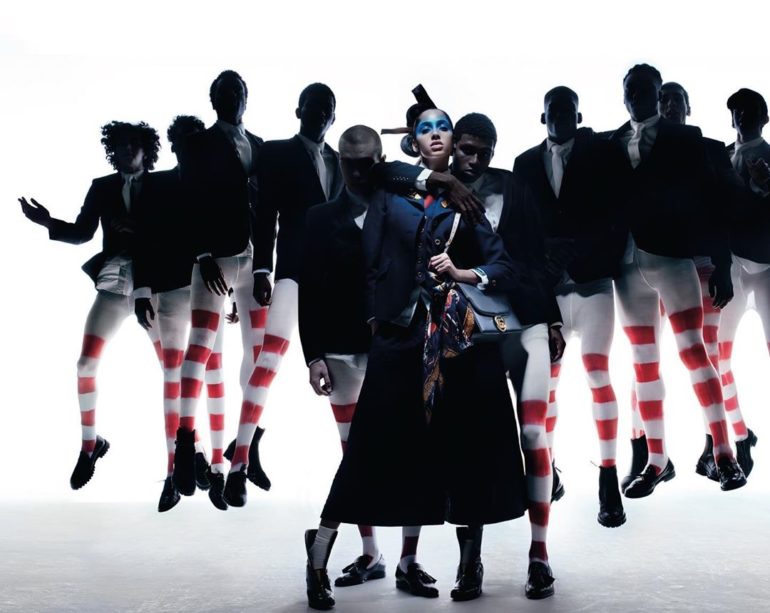 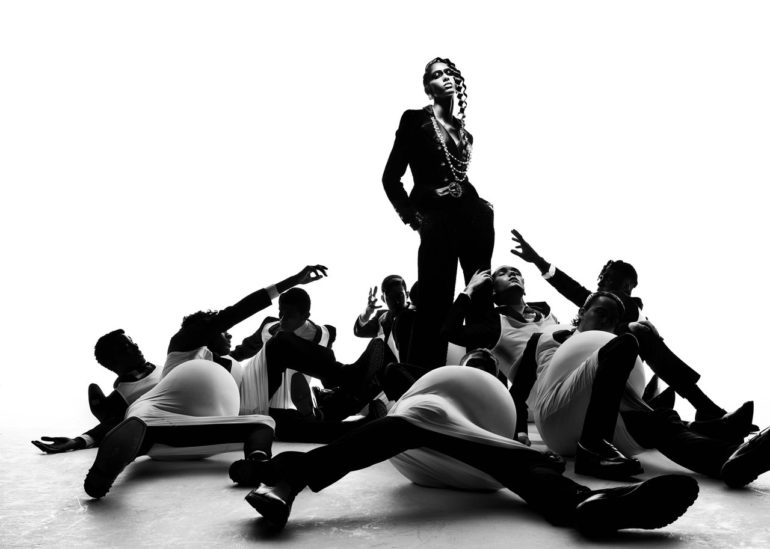 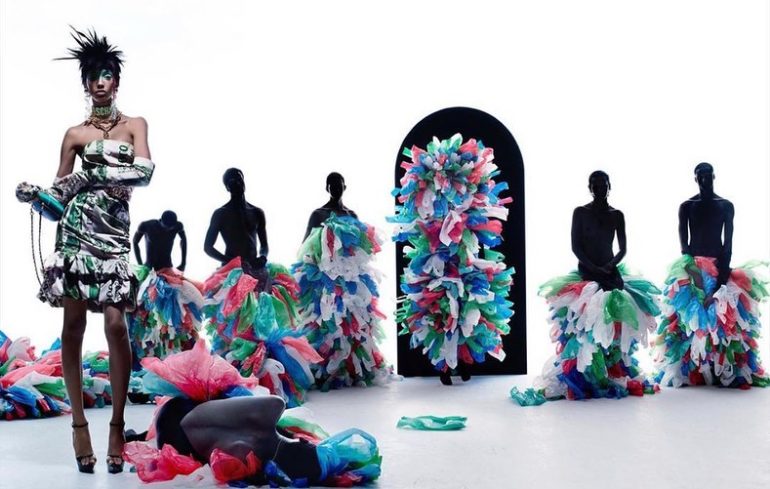 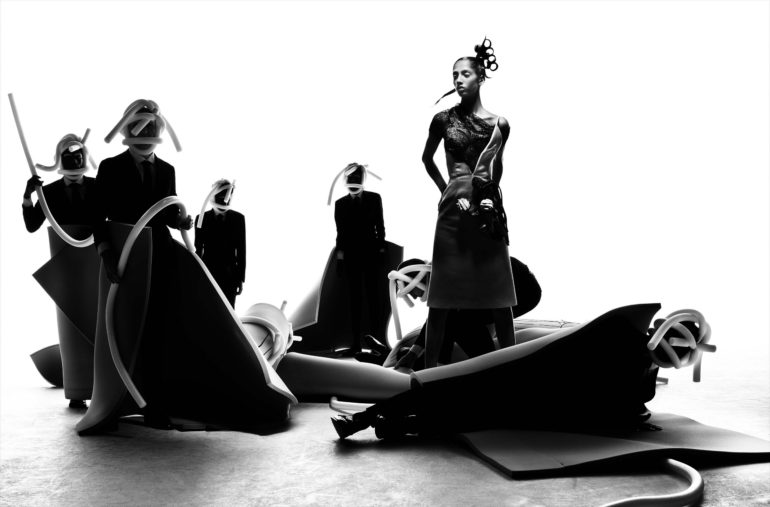 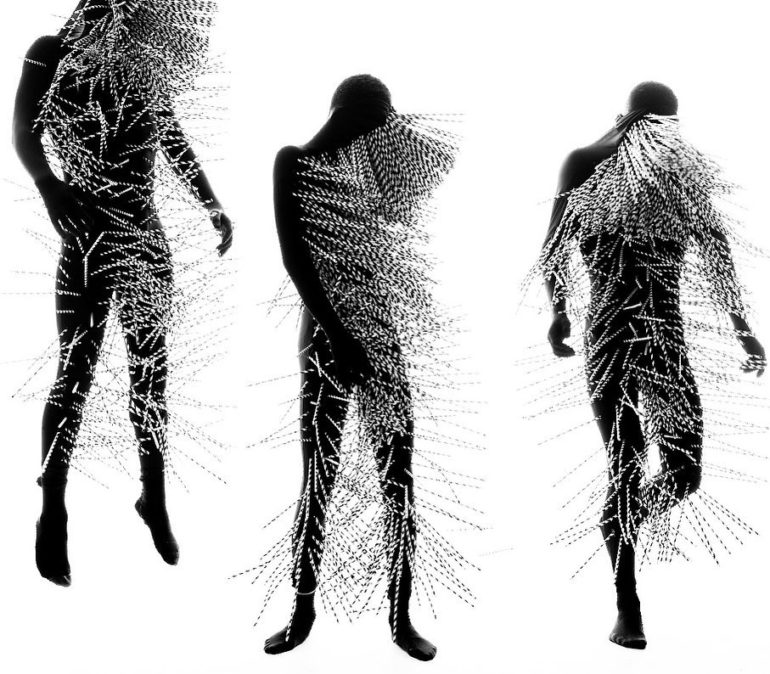 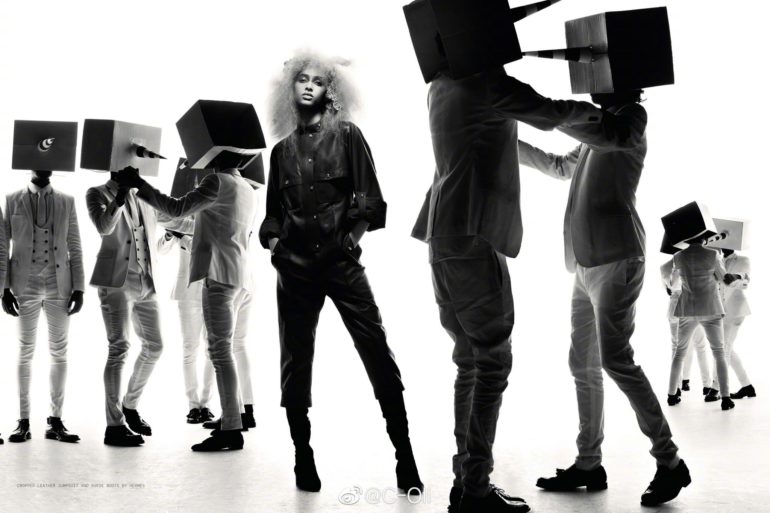 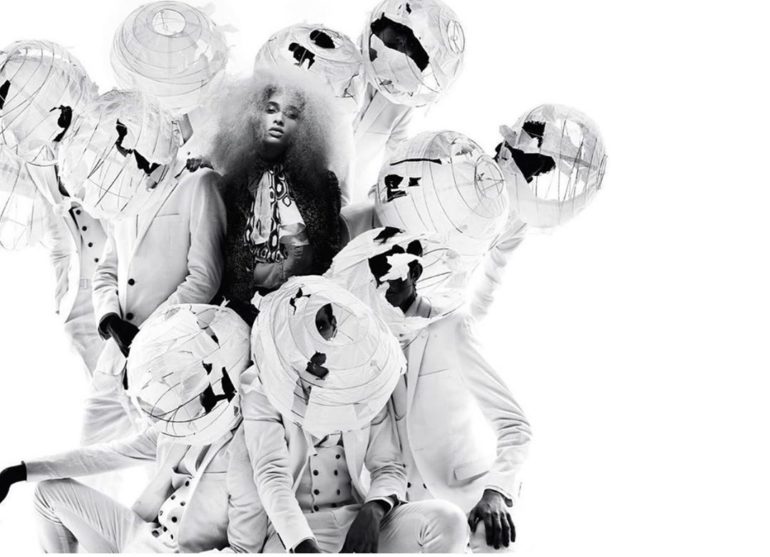 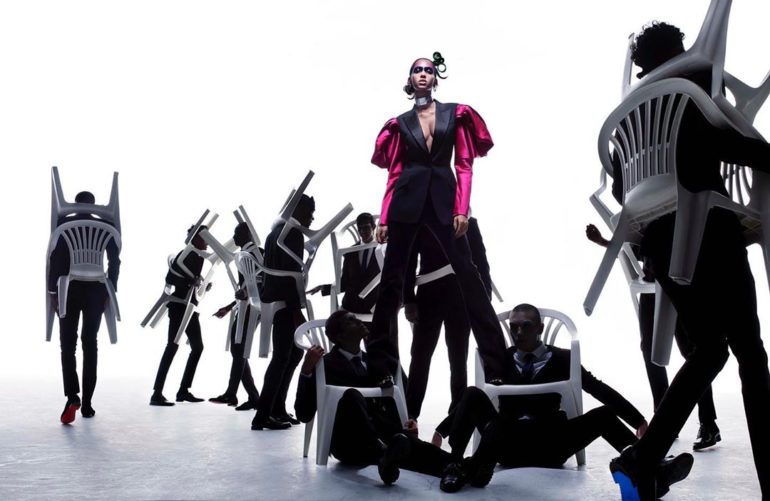 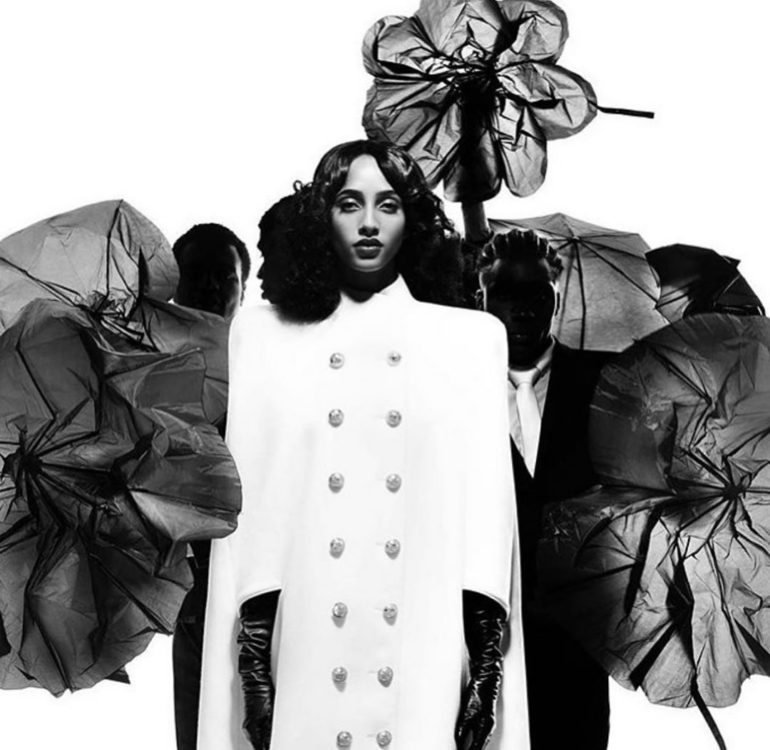