These stunning images of Jefimija Jokic for the S/S2013 Morfium Couture Swimwear Collection, perfectly depict this lines’ unique philosophy on the art of fashion.  Taking swimwear to the next level, these unique pieces can be worn in a variety of ways, and to many different places (beyond poolside).  Morfium creates a very limited number of pieces through-out the year, meant to be collected – like works of art. 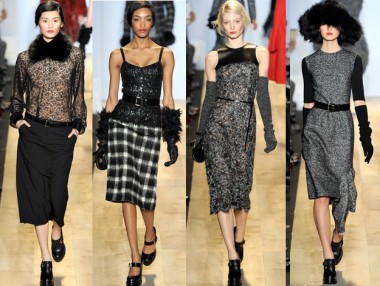 What I wouldn’t do to wear head-to-toe Michael Kors.  His clothing is truly the stuff of women’s deepest style-fantasies.  You think our lust is for slinky satin’s & decadent lace, forget it, this is what we dream of.  Layers & layers of fabulous textures/fabrics draped in perfection is the MK-Way, each combination telling an epic tale of luxury and exotic travel. 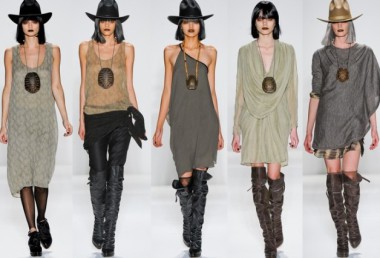 Put your Spring-Dreams on hold and allow yourself to imagine Autumn 2012 in all it’s Style-Glory.  Fall 2012 Fashion Week is upon us, with collections from the industries most prolific & accomplished designers, as well as, new talent with potential to rock the fashion-world.  This is the time of year to put your skills as an expert “comparmentalizer” to work.  Personally I find it exhiliarting to juggling my interests in current trends with that of my ability to “trend forcast.”  In my opinion, fashion is about Fluidity – seasons/styles/trends/looks – don’t live in a vacuum, they are extensions of one another.

Let’s get this outta’ the way, I hate Elisa Sednaoui right now.  I have a huge Fashion-Crush on Haider Ackermann, and would die to be in her shoes on this shoot.  So I guess I won’t be feigning any objectivity on this write-up, as I’m somewhat Obsessed with the man.  I have long called him the leader of the fashion-forward movement of “Power Layers”, and the important role they play in the lives of modern women.

Taking home the “Grand-Prize” at this year’s CFDA/Vogue Fashion-Fund Award was rising star Joseph Altuzarra.  No surprise to me, I was singing Altuzarra’s praises after his Spring 2012 RTW Collection presented during Fashion Week.  After working up the ranks as an intern with Marc Jacobs and an apprenticeship under Riccardo Tisci at Givenchy, he broke-out on his own and has been on the industry’s radar since.

Celine’s Spring 2012 Collection is a study in “Retail-Ready” clothing.  These pieces are an architectural-triumph, with a dazzling array of gorgeous detailing and impeccable tailoring.  With this level of structure still offering such a wide range of innovative ideas, the whole concept is a thrilling new take on “Minimalist-Chic.”  And their treatment of “color-blocking” the leather, is so gorgeous, the supple texture blends in with the other fabrics seamlessly.

In the World of Fashion there’s a group of “Sartorial-Masters” that are rising up to be know as The Layered-Kings.  An among them is quite certainly Rick Owens.  As his Spring 2012 Collection proves he continues to perfect the art of combining the Loose/Tight, the Hard/Soft, the Shiny/Matte, the Angles/Curves, and the Rigid with the Free.  It’s this New World Order of Layered-Chic, and it may sound laid-back and casual, but it’s anything but that. 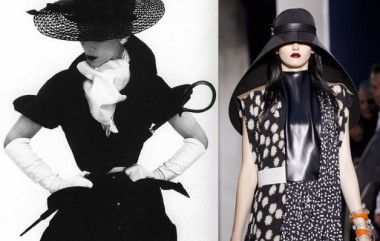 It’s very easy to see how Nicholas Guesquiere, head-designer for Balenciaga, cites iconic images from the great Irving Penn as inspiration for the Super Over-Sized Hats/Visors he had sprinkled throughout their 2012 Spring Collection in Paris this week.  Although the original “Buzz” heard throughout the fashion-industry was about the benches that gave way at the Balenciaga show, sending many style-patrons crashing to the floor (happily none resulting in a “fashion-emergency”), and requiring the hot/tired audience to stand throughout the entire Runway Presentation.

Gareth Pugh’s trip down “Sci-Fi” lane, didn’t really stir any deep philosophical stirrings to unearth the ultimate answer, “Who is the Gareth Pugh Woman?”  Rather, I allowed myself to be transported to this “Other-World”, courtesy of the Master-Designer, with all the open-mindedness of an explorer traveling to a new world.  This bold aesthetic was such an architectural feat, it was meant to be a visceral-ride, not an intellectual assignment.

Can I get a “Hell Ya!”  DSquared2’s Completely Awesome Spring 2012 Collection was like none other seen this Season, that at times felt like a giant Love-Letter to “Americana” – Livin’-Fast & Playin’-Hard. With models layered with party accessories and a bottle of beer, they came stompin’ down the Runway ready to play.  It seemed like every “Down-Home” reference was in heavy rotation, but I loved every delicious piece of eye-candy – from the detailed cut-offs to the (bright yellow) knee-high rain boots (Wellies) –  that came down that Catwalk – Hell Ya!!!

Just Cavalli’s Spring 2012 Collection was definitely a shout out to it’s predecessor, The Roberto Cavalli Line, with it’s signature flowing sexy animal prints – but this added a dash of “Cowboy Fab” for a wickedly-chic combo.  There was amazing western tunics thrown in with suede-fringe mini-dresses, and big-tall cowboy hats on top of snake skin shorts and fur vests.

Fendi’s Spring 2012 RTW Collection was a strange hodge-podge of decadent day-wear mixed with signature Fendi-Fur and high-end eleganct pieces, meant to attract the ultra-wealthy crowd, but missing the mark.  The line that usually comes out exuding all the pomp of the seriously privileged (without a hint of apology), seemed much less polished this Season.  From behind the dark shades of shame, the models looked a little more “Mad Housewife” the “Socialite Chic.”  The messy bouffants and over-accessorized ensembles, looked like mommy’s been in the Cocktails a bit too early.