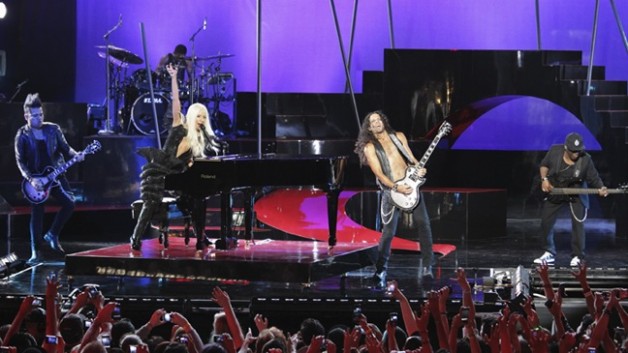 Lady Gaga Performed Lived on Jimmy Kimmel on an outdoor stage erected in the middle of Hollywood, causing quite a ruckus in the “City of Angels.”  Her little monsters went wild for her as she lit up the LA Streets singing 2 of her hits songs from “Born This Way”, and later managing to charm Jimmy Kimmel in a sit-down interview with the host.  As usual Gaga’s looks didn’t dissapoint, I was completely diggin’ the stick-straight bohemian blonde hair mixed with the super-sonic shiny black futuristic one-piece ensemble.  I was also really feeling her makeup – she looked cool/confident.  And I agree with many of the write-ups comparing her look to 70’s icon – Cher (here’s to a Gaga & Cher editorial colabo – you heard it here first).  Check out the interview and live performance at idolator.com.

Go2 CNN’s Marquee Blog for a compelling look at Lady Gaga’s fragile side.  I watched the much talked about Lady Gaga’s HBO Special “Monster’s Ball Concert at Madison Square Garden”, and I much say I wasn’t dissapointed.  It was a visual master-piece for sure, but it was as much Musical-Theatre as Concert – in the best possible way.  While each song had it’s own theme and unique styling, what made this concert different was how the individual songs all connected to the over-all story “Getting to the Monster’s Ball.” 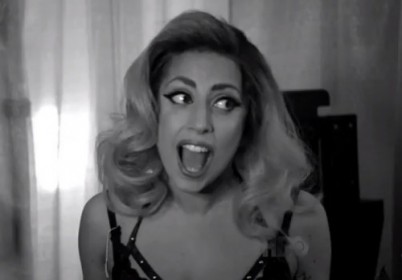 The personal touches this artist shared between the songs was the most compelling part of the show, giving us a sense of how important her fans are to her.  Every (carefully choreographed) word or gesture, seemed to be directly dedicated to her “Little Monsters.”  My favorite part was a unique a ‘capella version of “Born the way” (right), sang backstage around a piano with her back-up singers – It had a vulnerable and raw feel (like Gaga herself).

They are showing a Behind the Scenes Look at her Madison Square Garden Concert (Made for HBO).  In it she shares how her emotions are all over the place when she is preparing for a concert.  Also on the site is Gaga’s apology for calling the comparisons to Madonna “Retarded”. 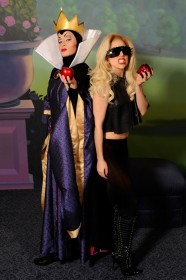 Has Lady G. met her match.  Proving that “No Place on Earth” is off limits, she takes a break from her “Monster’s Ball” tour with a little side-trip to Orlando-Florida (left), where she meets up with the (other) Wicked Queen, at Disney-World.  for more Go2 Idolator.com

Lady Gaga’s new single “Judas” is fabulously controversial, just the way this Super-Star likes it.  In-fact, the singer let the world know that she thought the video was a success, saying “It turned out more beautiful than I expected.”  She maintains that the concept of the video comes from past boyfriends indiscressions, and that the only overtly religious message she’s putting out, is that she is “Obsessed with Religious art.” Check-out this fascinating look at the imagery used in the video, from this article at Mtv.com – “Lady Gaga’s ‘Judas’ Video Decoded“.

In all her Gaga-Glory, she saw-the-light as she preached/performed at the Staples Center (below) with the Scissor Sisters. 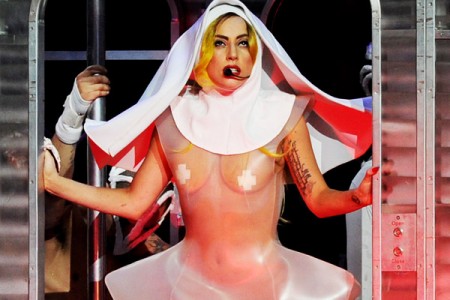 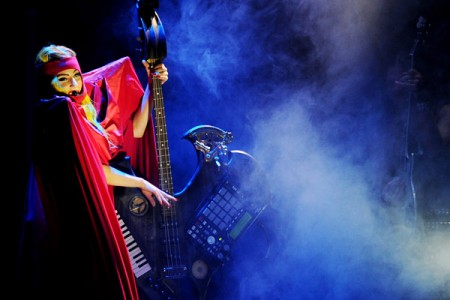 Lady Gaga’s ability to reinvent herself with such passion is what makes Bazaar’s May Cover-Shot Spring-Chic Deluxe personified.  I’m Completely Obsessed With her hair color – and I’m overly impressed with her never-ending chameleon like ability.  Check-out Bazaar.com for more on Lady G.

Following up on her Runway Debut for Thierry Mugler, Lady Gaga is now wearing the Designs on the Current Issue of i-D Magazine.  Calling it their “Exhibitionist Issue” i-D is putting out 4 Cover-Shot options to celebrate artist in all genres.   As i-D puts it, The House of Mugler has been “Reborn” By the addition Nicola Formichetti (Art-Director) and Romain Kremer/Sebastian Peigne’ (Designers). 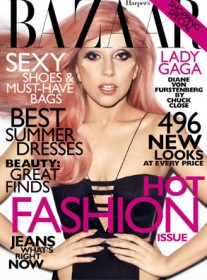 With similar facial prosthetics as she wore to the Grammy’s (hopefully not the same ones – ewww), Gaga is completely edged-out is shades of Black/Grey.  Wearing a glossy-black latex jacket, jet-black eye-shadow, shiny black lips and dead-as-night pointy black finger nails….I’m not sure this imagery hasn’t gotten Mugler any closer to Commercial Status – and I don’t think the pics are breaking any artistic barriers, however, they are cool and have a rawness about them that are inviting.  They absolutely should had more out-fits and added a neon bright pink/purple, I think that would have brought it full-circle. 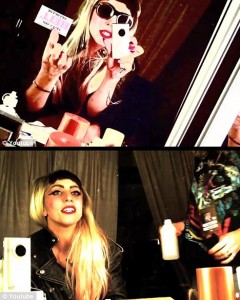 Check-out DailyMailUk.com for a behind the scenes look at Lady Gaga preparing for her upcoming tour 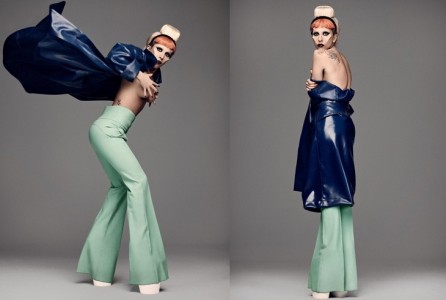