Anna Ewers is retro fitted in “Feeling Good” by Mario Sorrenti for Vogue Italia, 04/17. All revved up and ready to go Ewers takes her baggy pants and she hits the road. Drowning in a 80’s funk bust, this story proves that art is in the application. High fashion celebrates haute history, by tracking trend patterns primarily from the 60’s & 80’s. Alex White goes for a retro infused vibe with styles that defy our idea of strange. A slow groovin’ beat hits the street with outfits that honor this pop induced craze. Graphically inspired shapes fuse together angular application and colorful combinations, blending the old with the new. Drama redefines the page as neon lights flood the face in a righteous rage. Special effects give the illusion that Anna has doubled, with a jumpsuit that’s infused with retro flavor. Pictures project a plethora of play as white, parachute pants pay homage to the day. Gettin’ down and funky… dizzy designs reflect sartorial artistry of the era. Screaming to be seen in a boyfriend style polo-shirt, she waits to get wet in a pedal adorned, vintage swim-cap. Her skin speaks in eloquent phrasing as nude beauty leaves her looking anything but baron.

Languishing in modern era makeup Kanako Takase takes us from clean to extreme. Faces provide an illusion of application that appears naked, but upon closer examination we see something more. A tint of pink passes over the lids, leaving her looking even more ethereal than usual. Shadows adhere to an empty background, as today’s palates aren’t just 2000/none ~ they are 2000/done. A cacophony of colors are cast into play as the lids are alive with the tones of the day. That’s to say, the trajectory for this face tells us that nothing is off limits. What was once considered simply avant-garde fodder, has made its way into the fashion foreground. The wings of the future have arrived, as shadows swerve over the lids and black bleeds out both sides. Dripping in dark, she bends her head back to show off her dramatic makeup. Liquid liner oozes over the lids making its way down to the lips, while the mouth radiates with a shade so deep… it takes us into another dimension. Pretty pops with primary colors circling the eye area, as white sits on the side surrounded in a pinkish hue. Orbital artistry erupts as red encompasses the entire lid, while yellow completely covers the body of brows. Recine takes a modern approach to the craft of coiffure, approaching the hair like clay to be molded. Art is defined by one’s ability to engage in the act of risk taking. Continuing down this pathway of purpose we begin to understand our new resolve. Sorrenti shows us that what was once considered abstract is finding its way into the main stream. 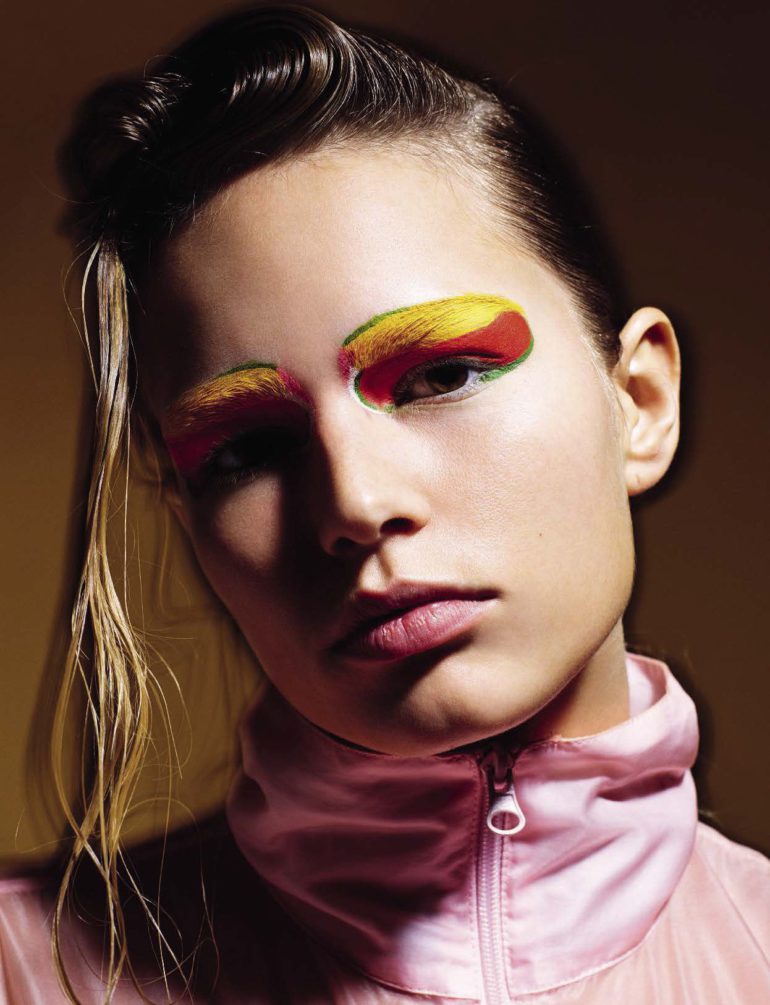 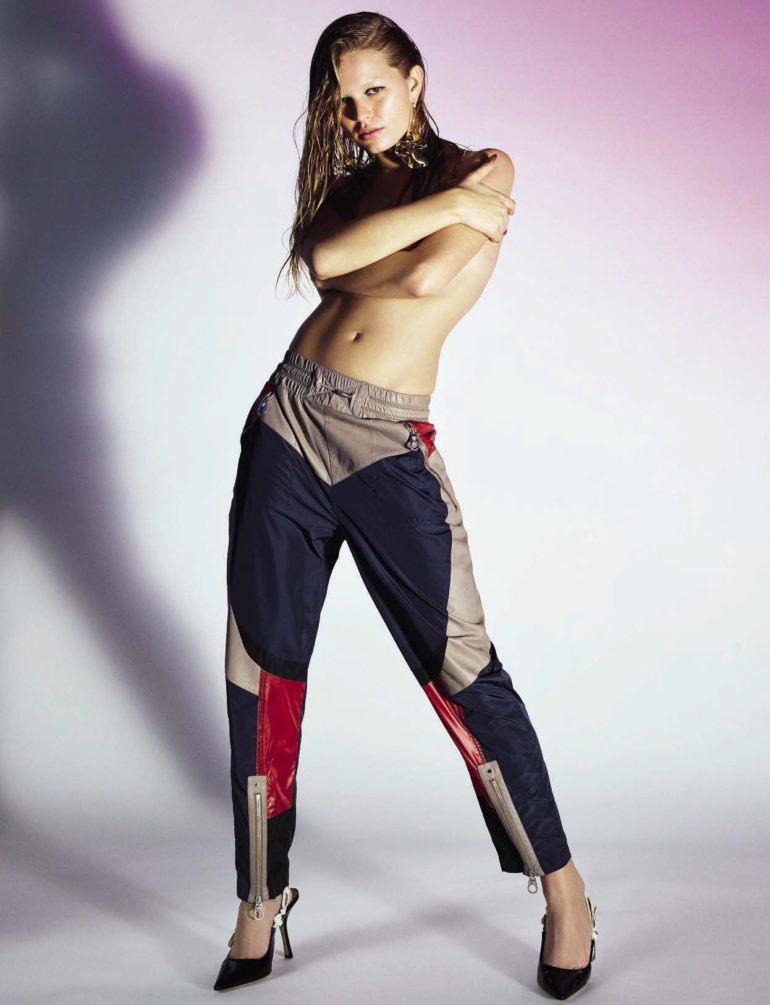 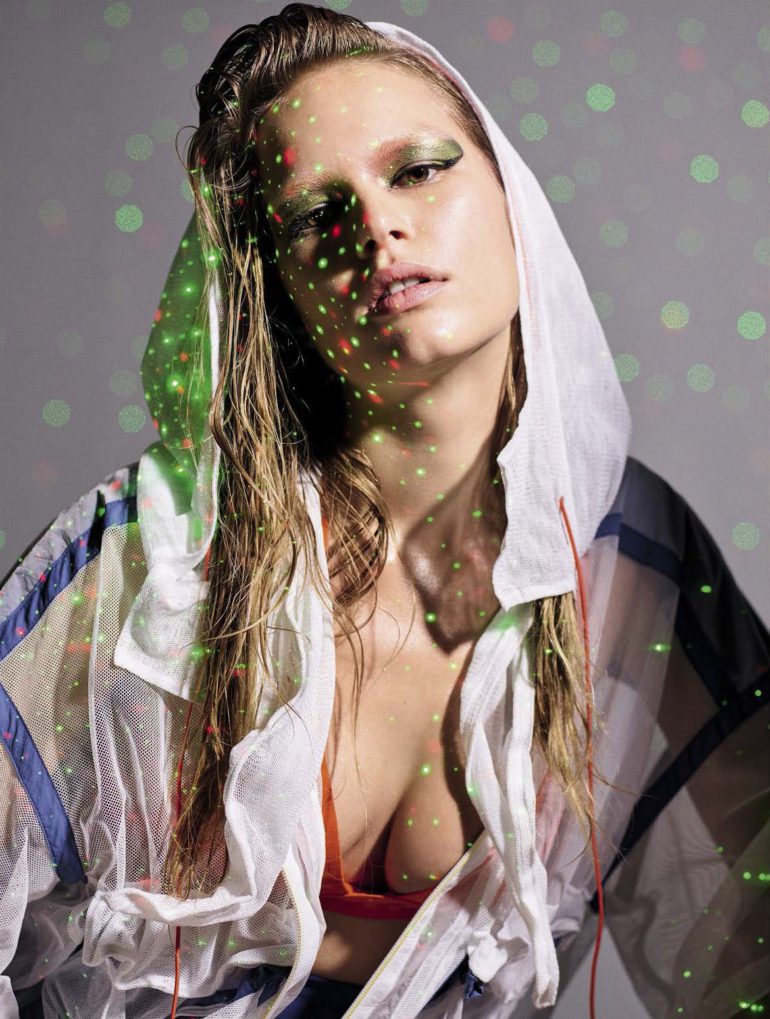 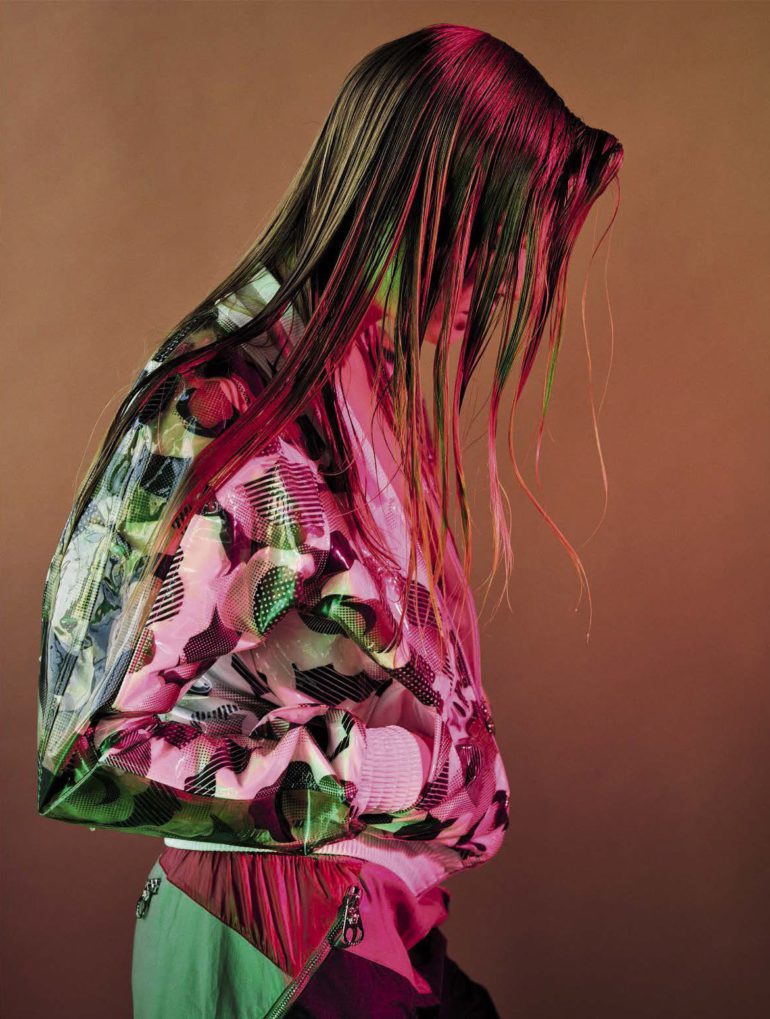 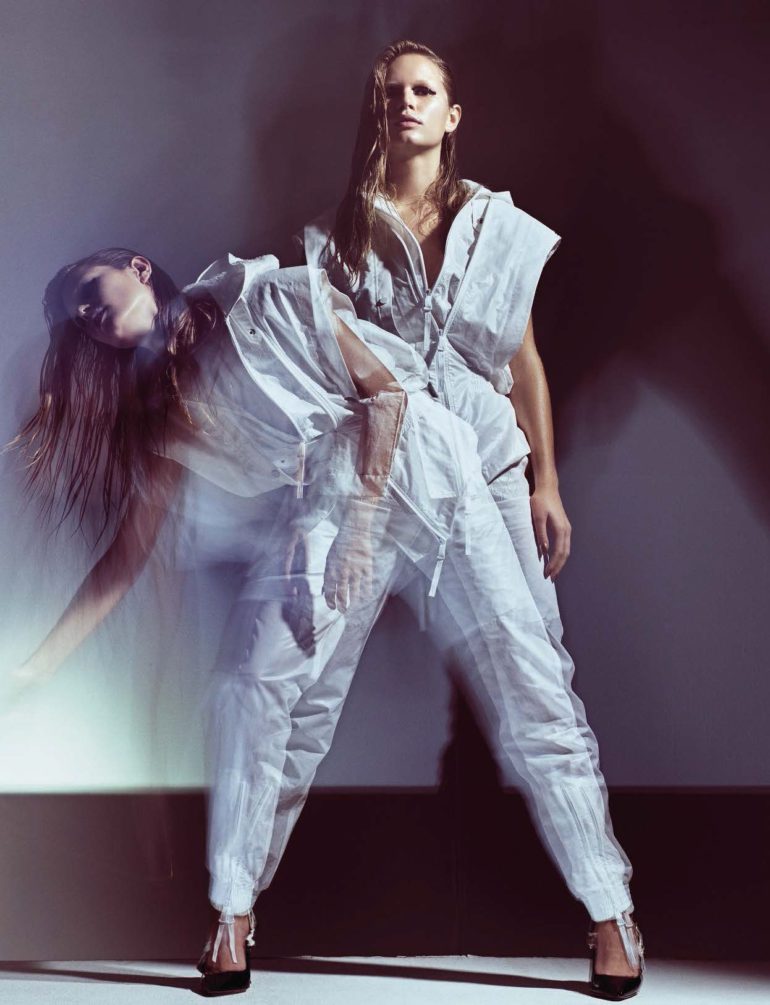 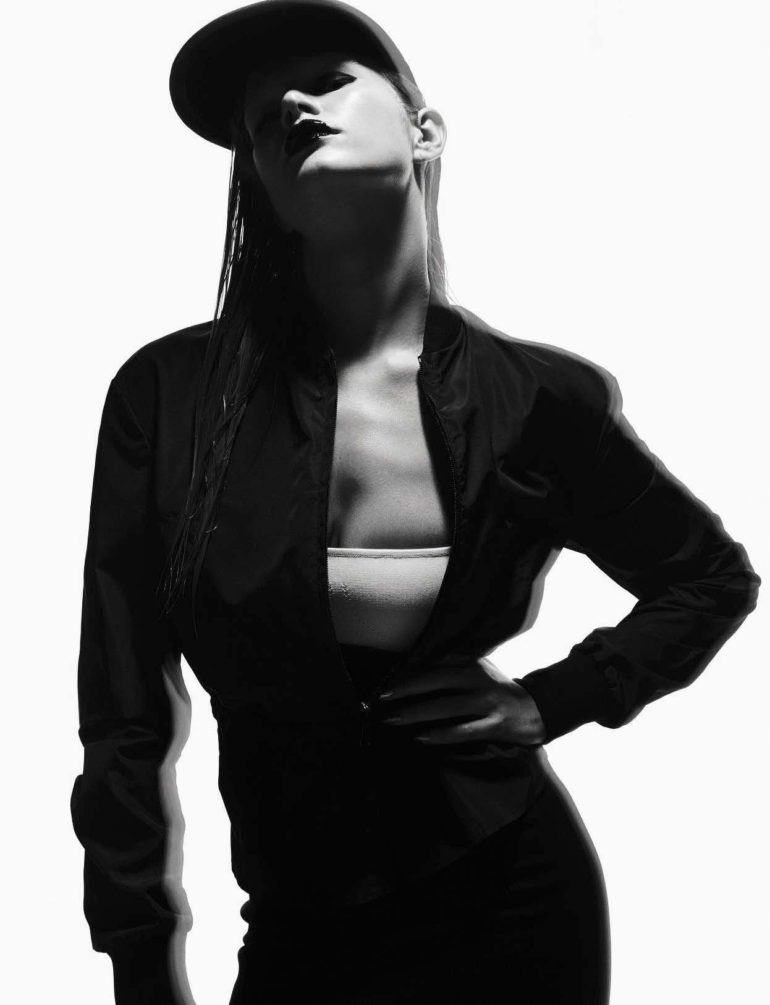 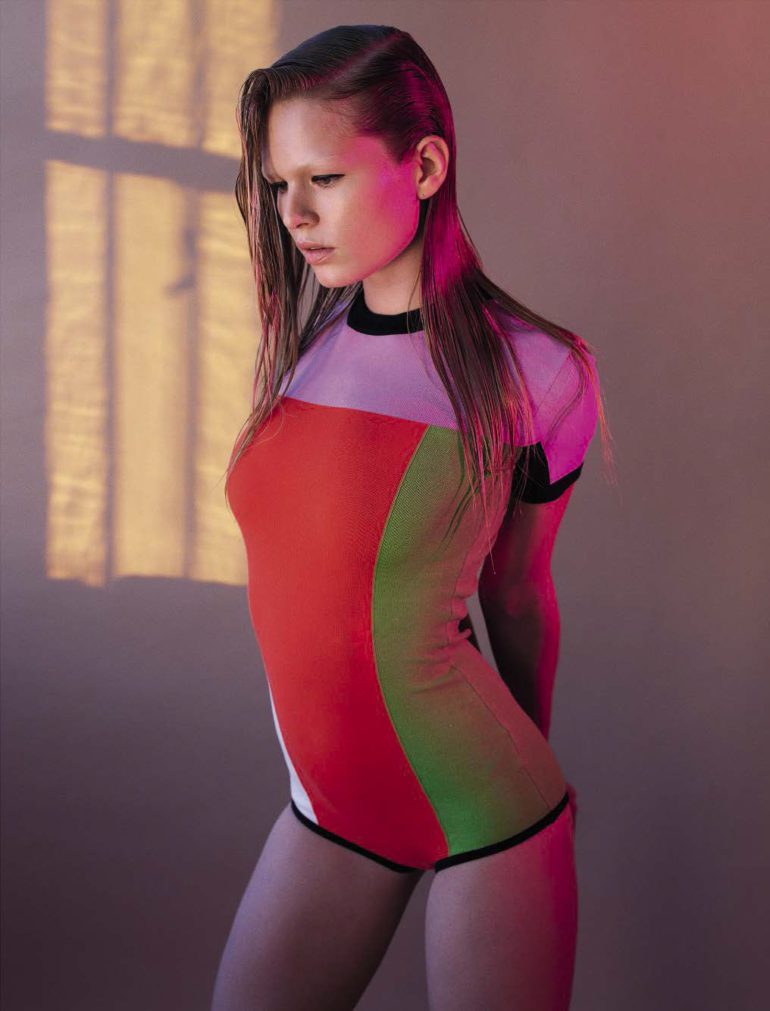 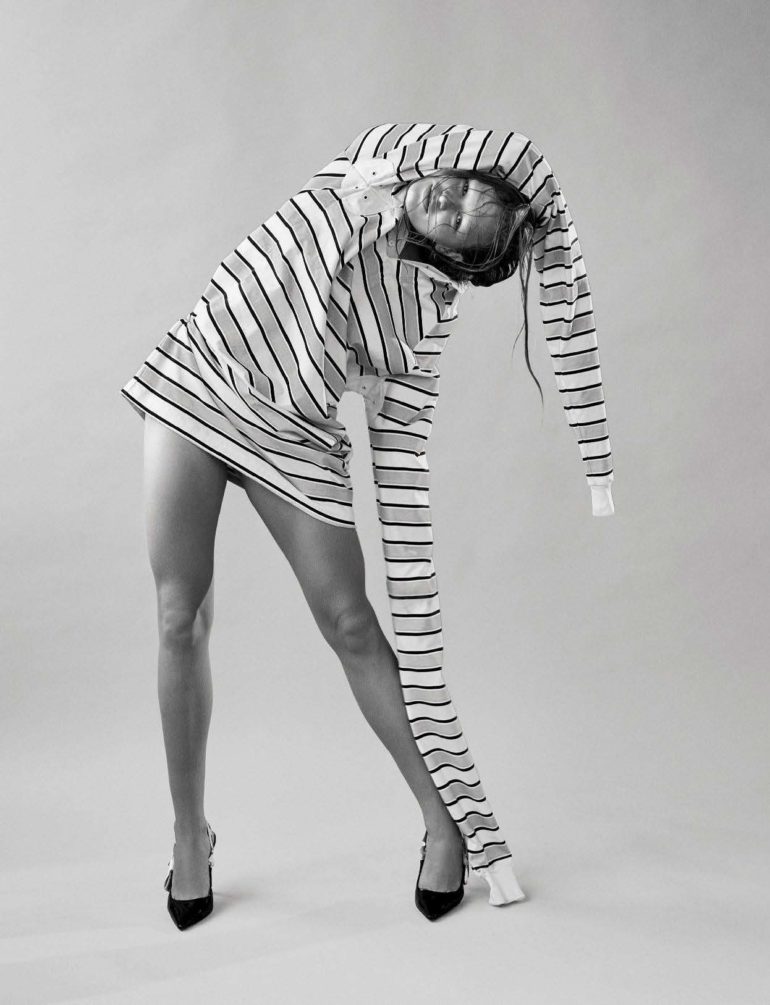 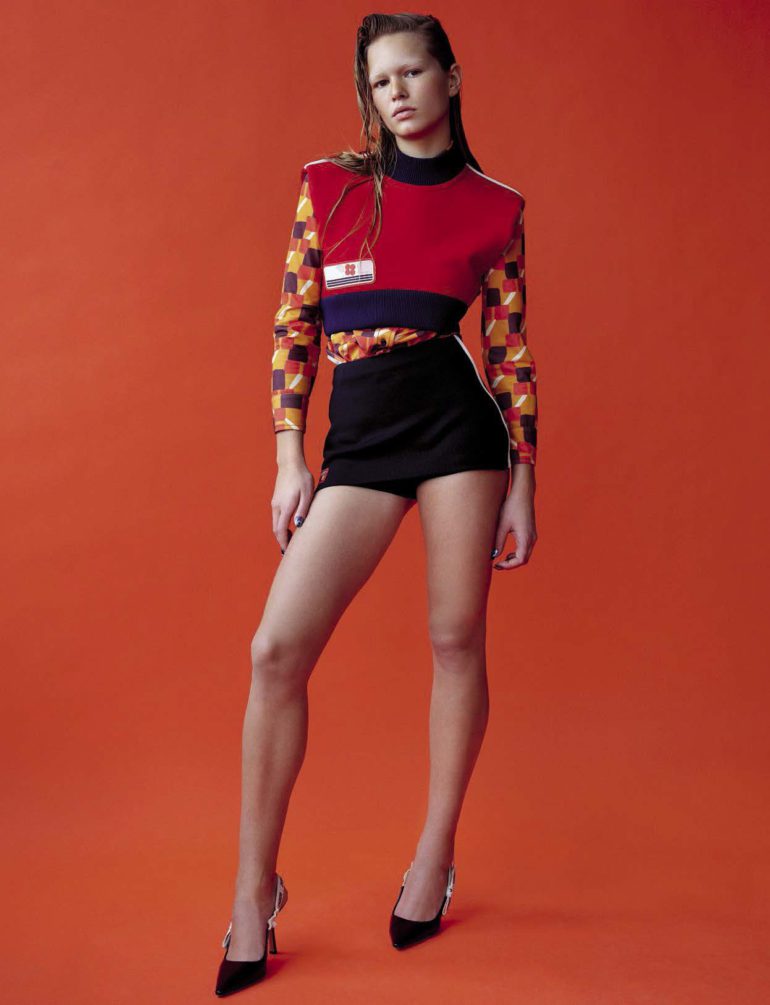 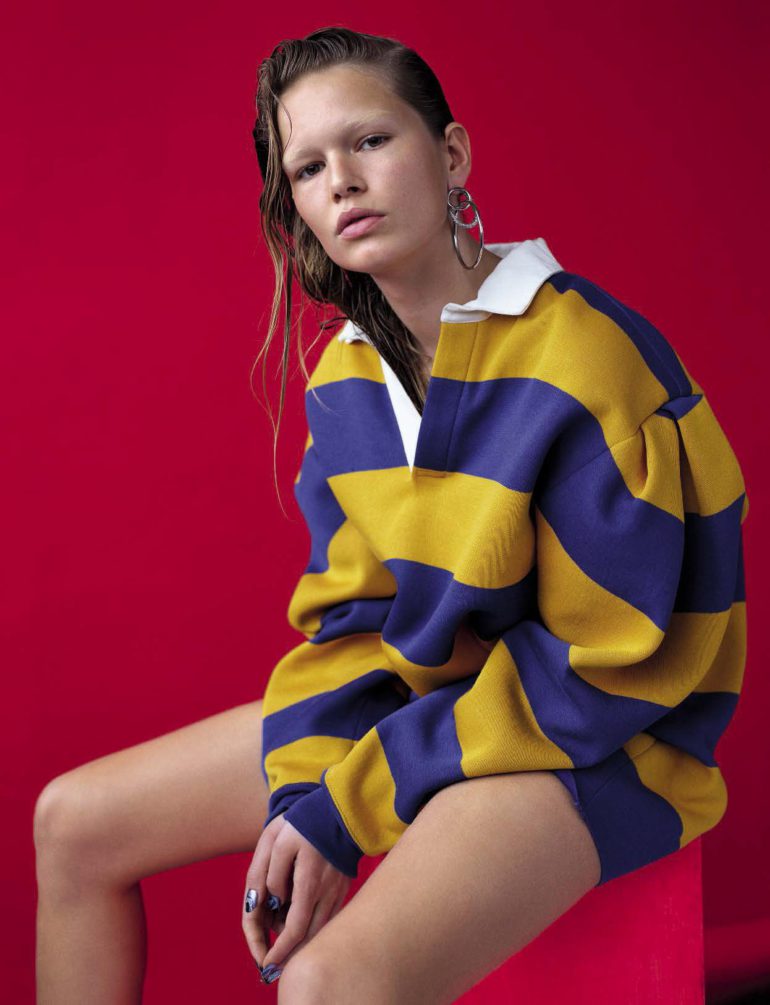 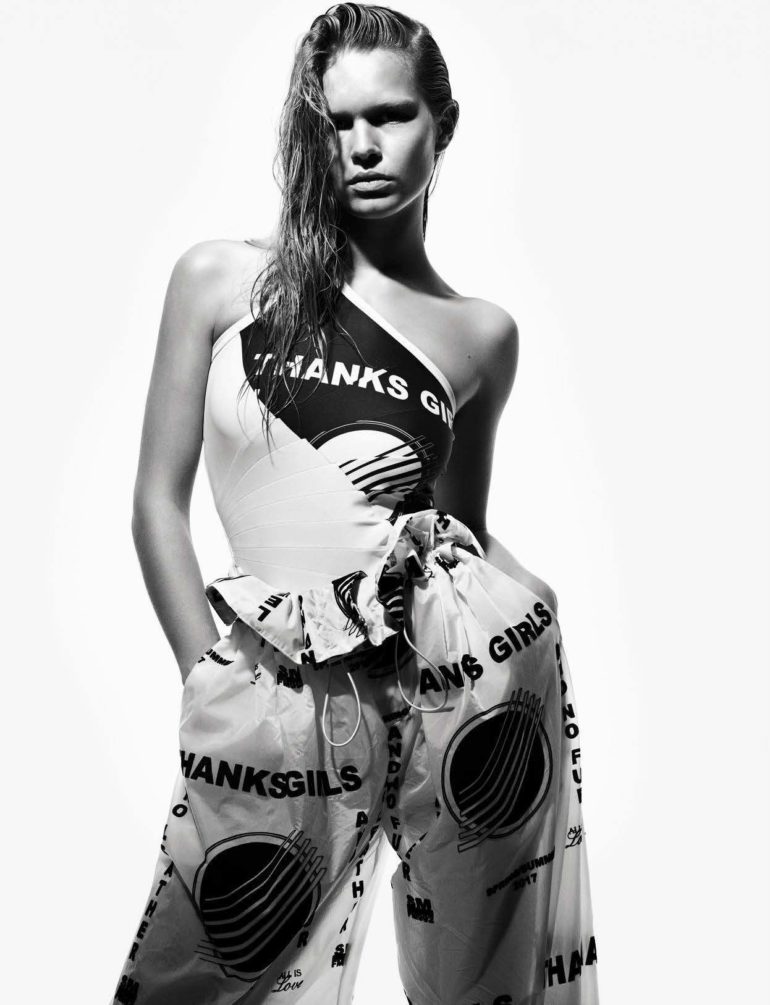 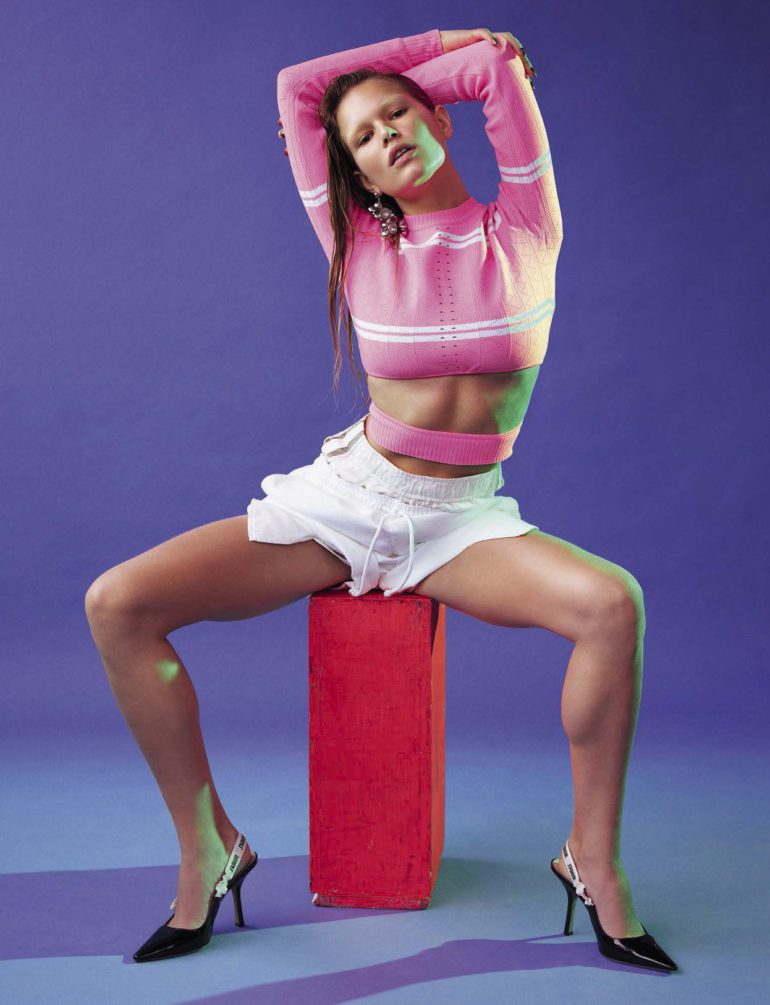 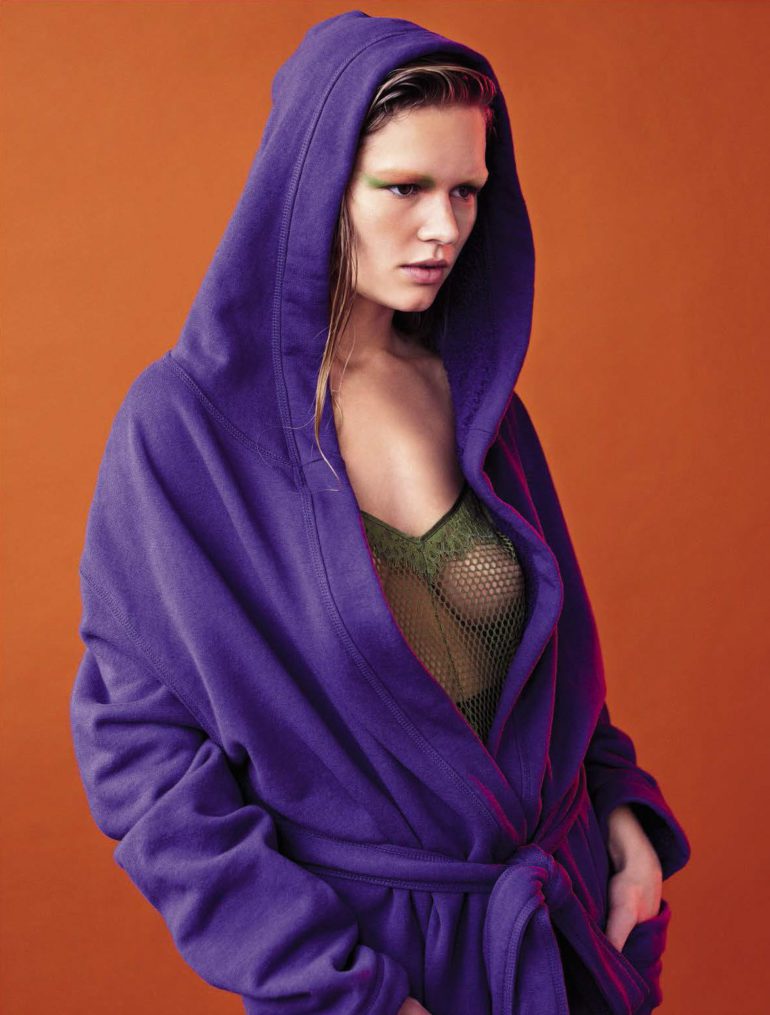 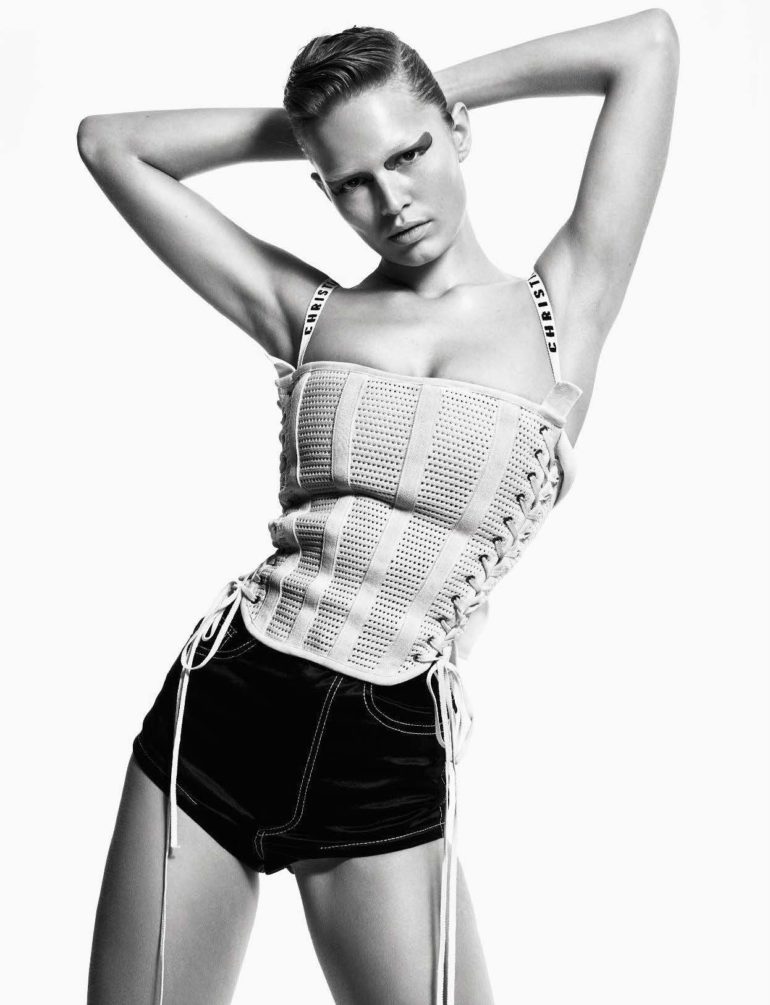 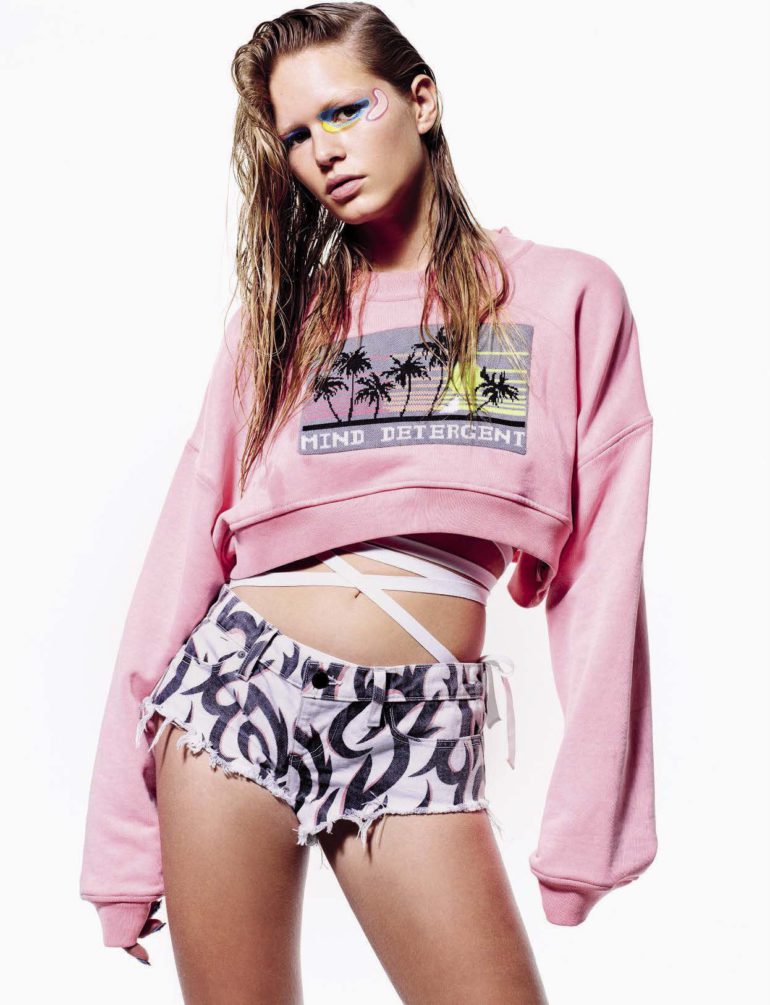 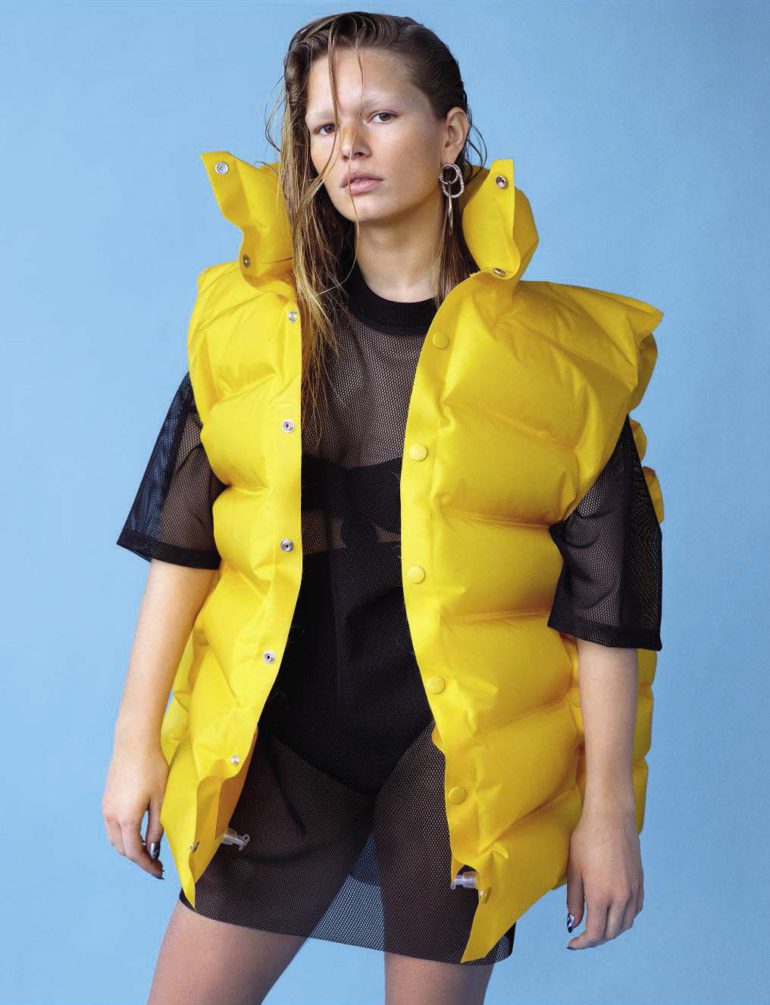 Emmanuelle Alt Brings Fantasy to Shores of the Sea

Anna Cleveland's Aria Rises Up "Like a Diva" by Miles Aldridge