Camille Hurel & Sarah Dahl travel forth from distant galaxies, in “Stellaire” shot by Sølve Sundsbø for Numéro Magazine #189, December/January 2017-18. Landing with a blast, these beautiful creatures bring forth the interplanetary bling. Art and excess go hand-in-hand, as Sundsbø covers the annual bi-monthly Winter/Issue. Their bodies morph through the magic of metaphysics, transforming into earthy entities from beyond. Forging their way through this earthly realm, they fight to become accustom to a new Ectoplasmic outer shell. Alterations begins as the imagination takes hold. Alien beings are made to look like modern women ~ a concept both a unique and perplexing. We hold beauty to such a high standard, as if it carries the weight of the world. When truly, all we’re talking about is the outer shell of the human. To behold the truth of beauty is to open yourself up to beings from this world and beyond.

Irina Maire brings forth unto this earthly body the art of interpretation. Freedom is found in all that is real as we learn to let go of the idea of the ideal. Applying a sense of individualization will allow the application process to prosper. Life on this Plain is Explained Through the Act of Creative Execution. That’s to say, each image is more than fashion articulated, it’s a confluence of creative forces united. This symbiotic fusion comes in many forms, as a plethora of brilliant materials blend into the scene. Opposing elements are combined in an effort to appreciate the earthly appeal, as images move from leather to lace and fiery to flat. Designs reflect distance while projecting raw power. Camille and Sarah play their parts with paranormal appeal. Sowing seeds of discovery these creatures evoke synergistic style. Appearing in a robotic stance, they embrace surroundings by giving off a placid response. But, don’t get it twisted. Even with a lack of animation, we are drawn to the difference. Opposites really do attract, as these distinctly unique figures flow together.

Flat facial responses are taken with context, as Polly Osmond uses opposing elements to her distinct advantage. This isn’t a tale of covering up… rather it’s a story of revealing. The revelation of modern beauty is captured through artful application. Projection is reflected, as pretty isn’t about portraying a naked face, it’s about exposing the skin and all it’s subtle secrets. Camille captures our imagination with brows so intense we could get lost in their lure. Thick and lush, they frame the face with strength, providing an outline of ethereal appeal. Beauty beguiles as a touch of soft color sweeps over her lids, and a glow seems to flow over her face. Sarah Dahl lets her features speak, with an angelic pallor so intense, her spirits seem to rise. The shine of her soft skin is seen from the sky, as the breadth of her beauty appears in the art of her eyes. These creatures are so captivating they evoke an influence of otherworldly intensity. Martin Cullen stays true to this cosmic tale, creating hair that’s one step ahead. Wet locks are swept back signifying strength, as dry dews fall forward indicating freedom found. This isn’t about coiffured perfection, it’s about sync with your surroundings. Embracing the Four Elements of the Western Culture: Earth, Aire, Fire and Water ~ as Sarah stands in the center of a star burning bright ~ we see her unleash her inner fire. 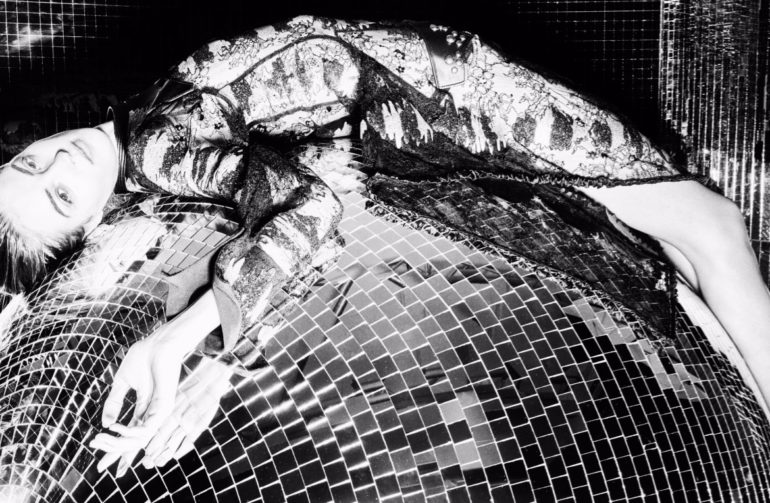 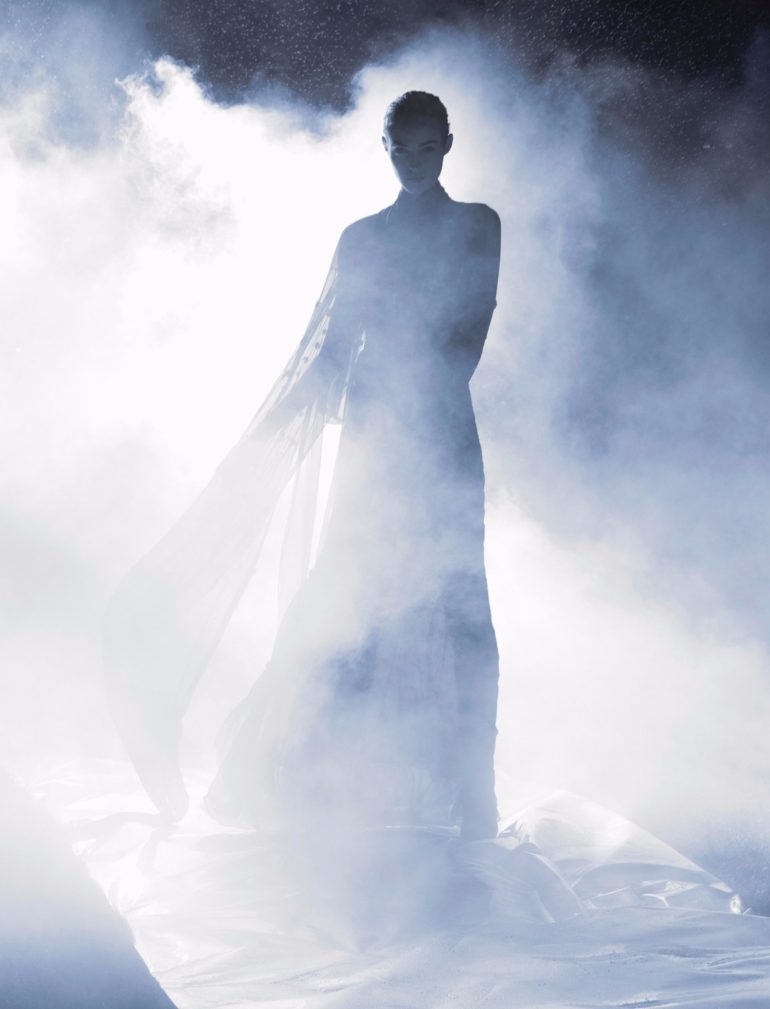 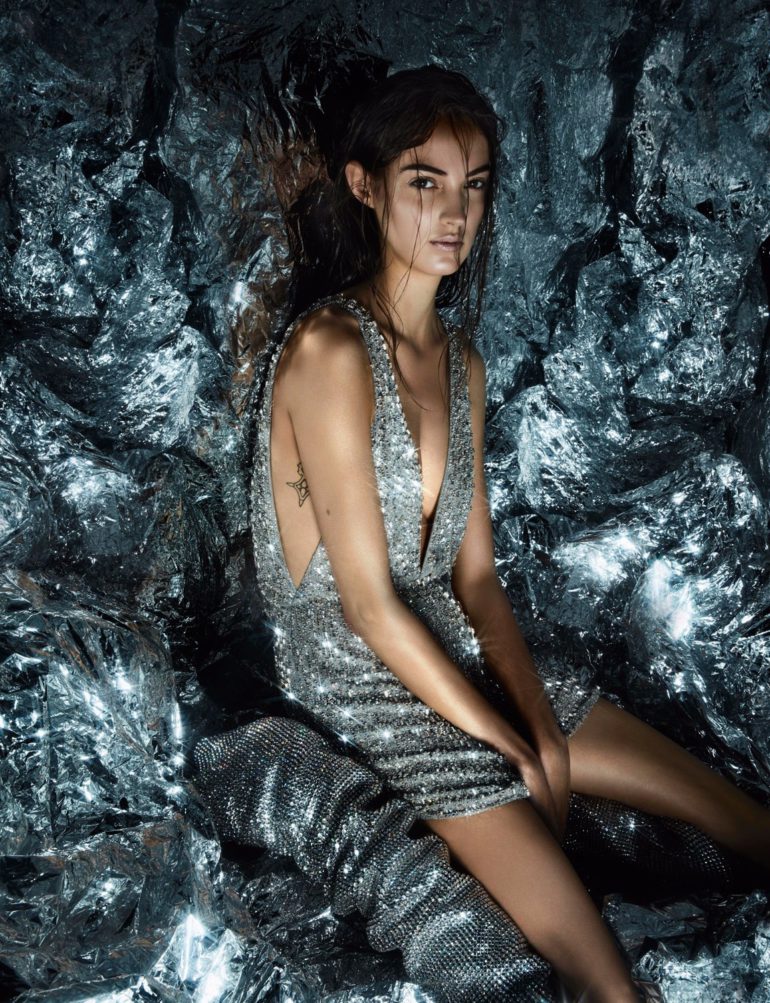 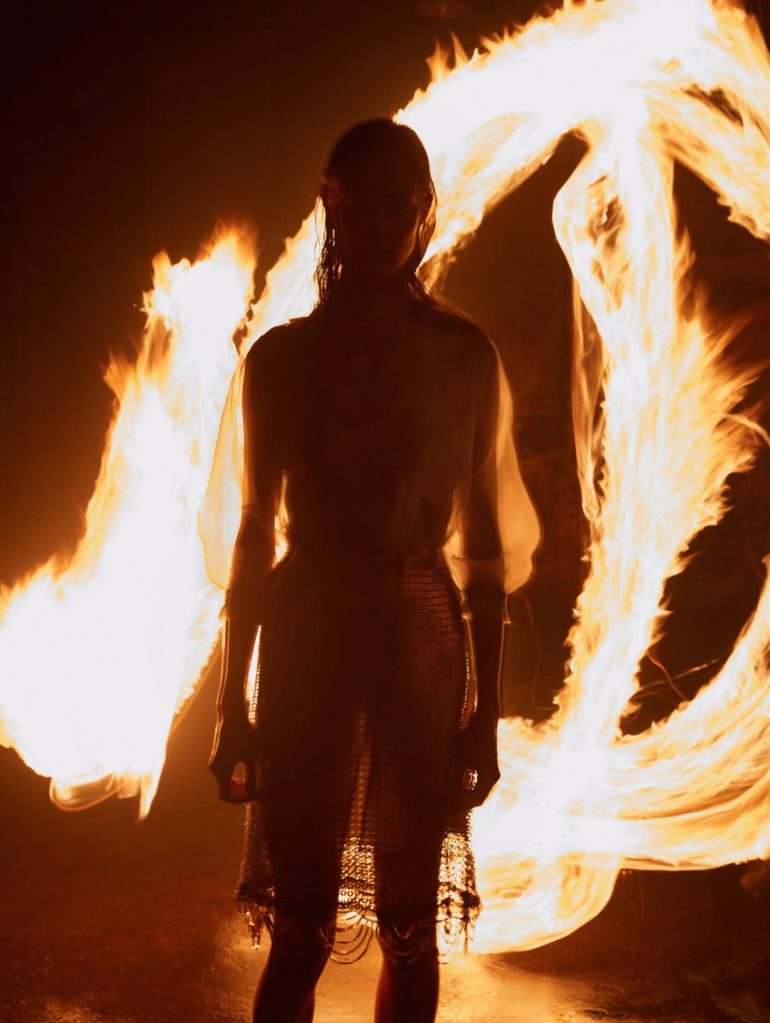 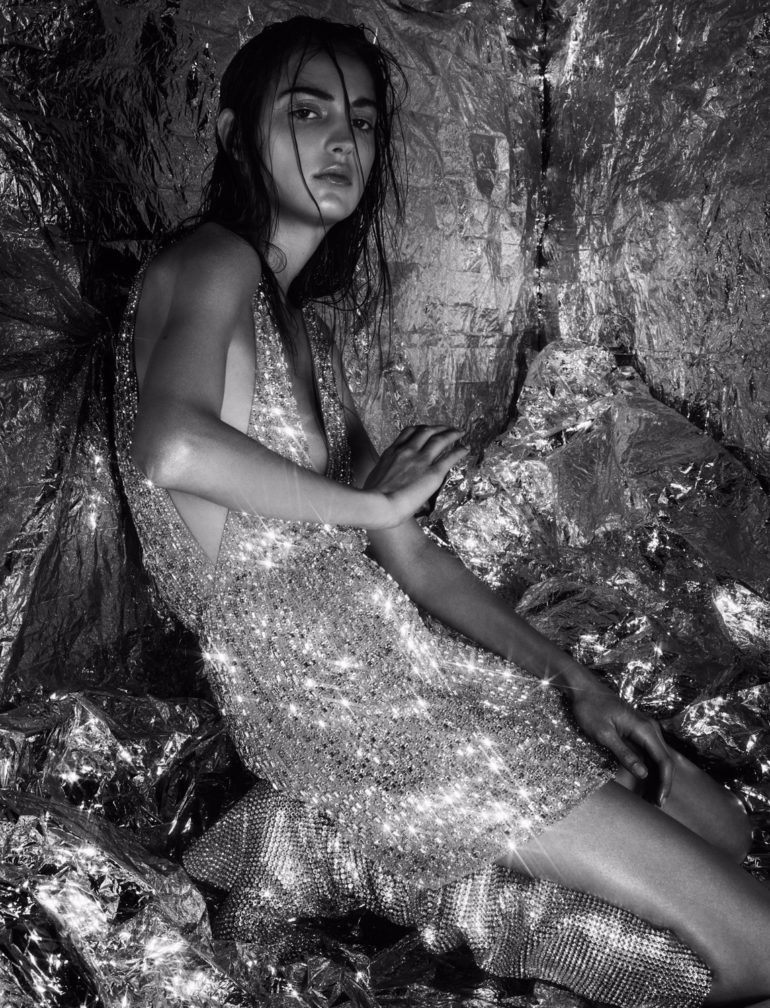 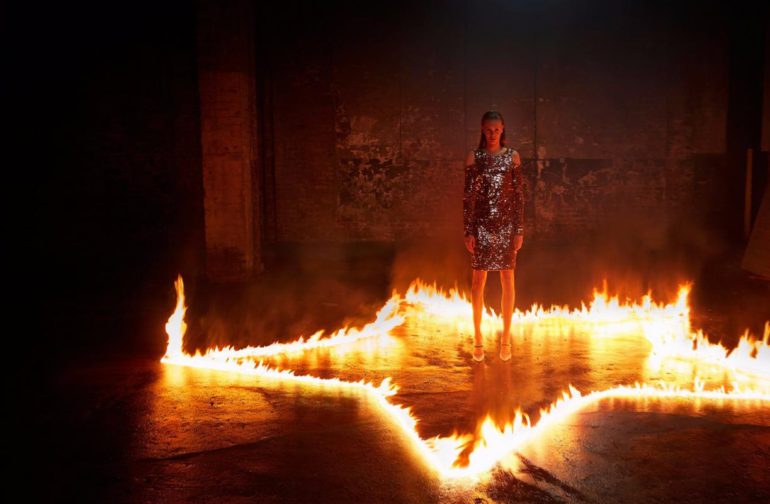 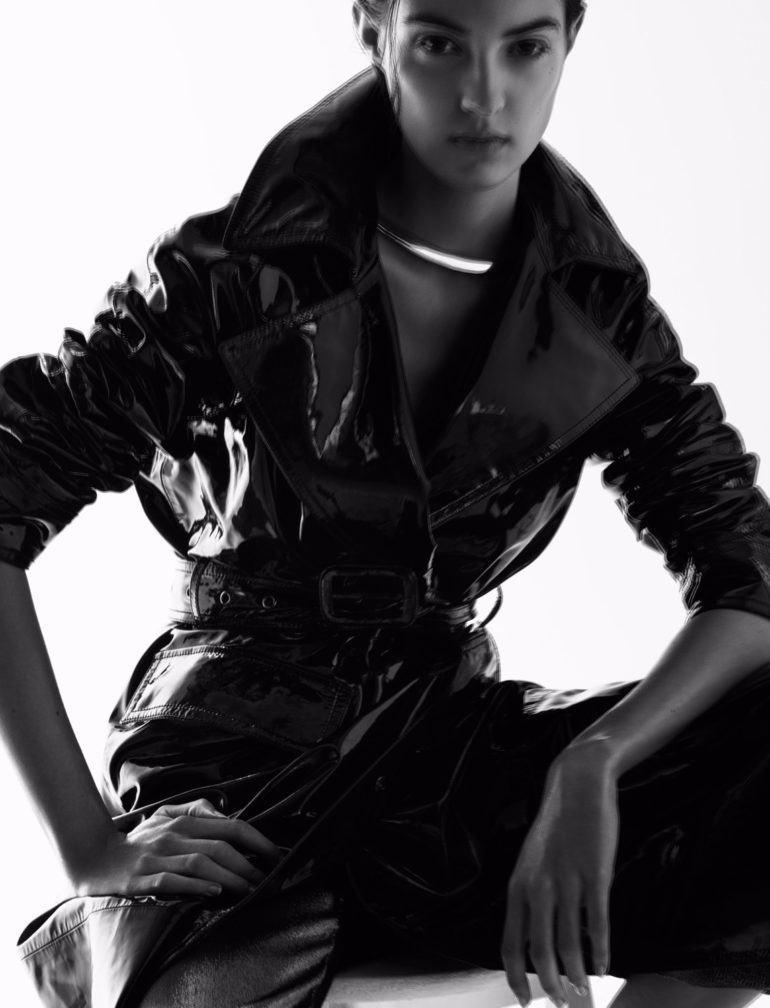 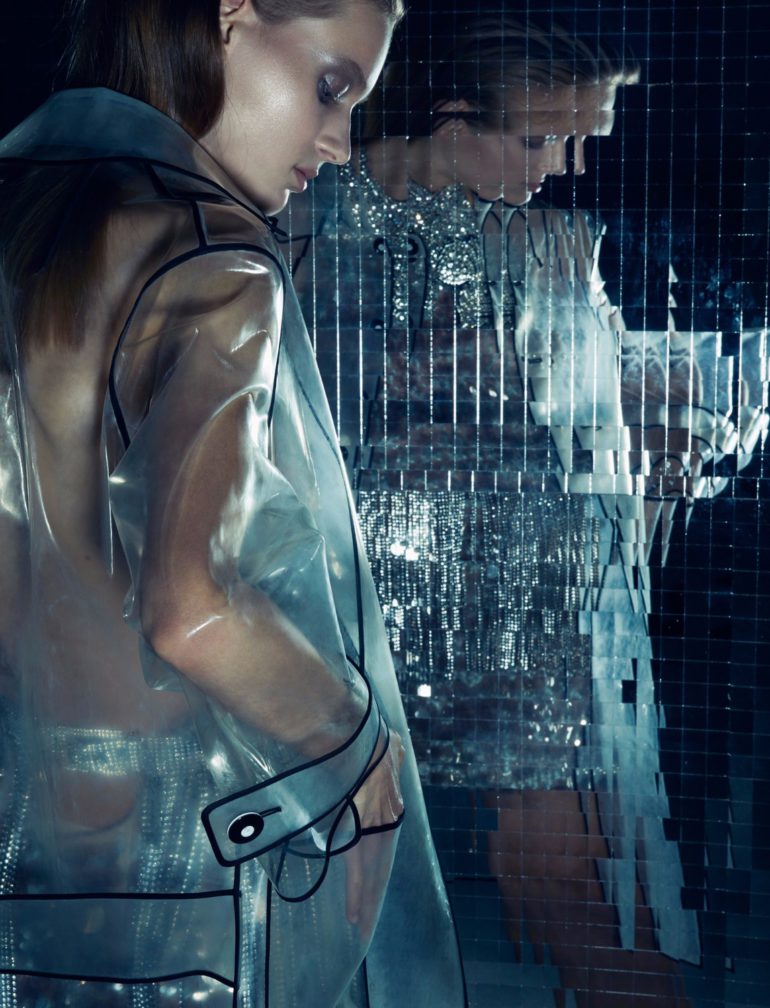 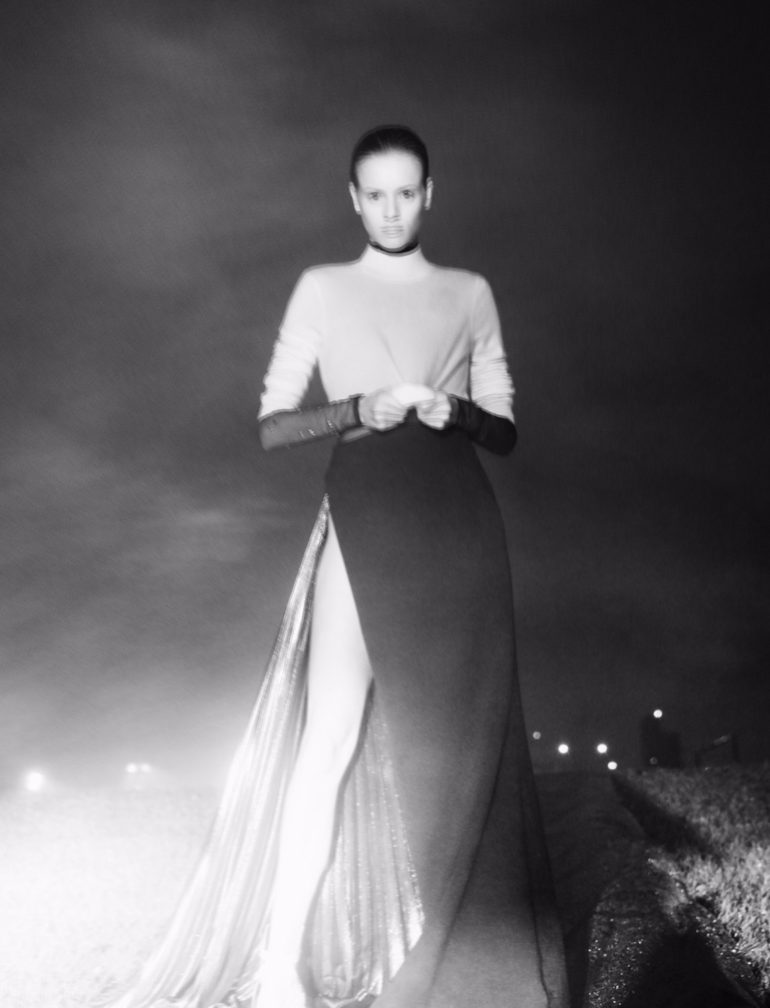 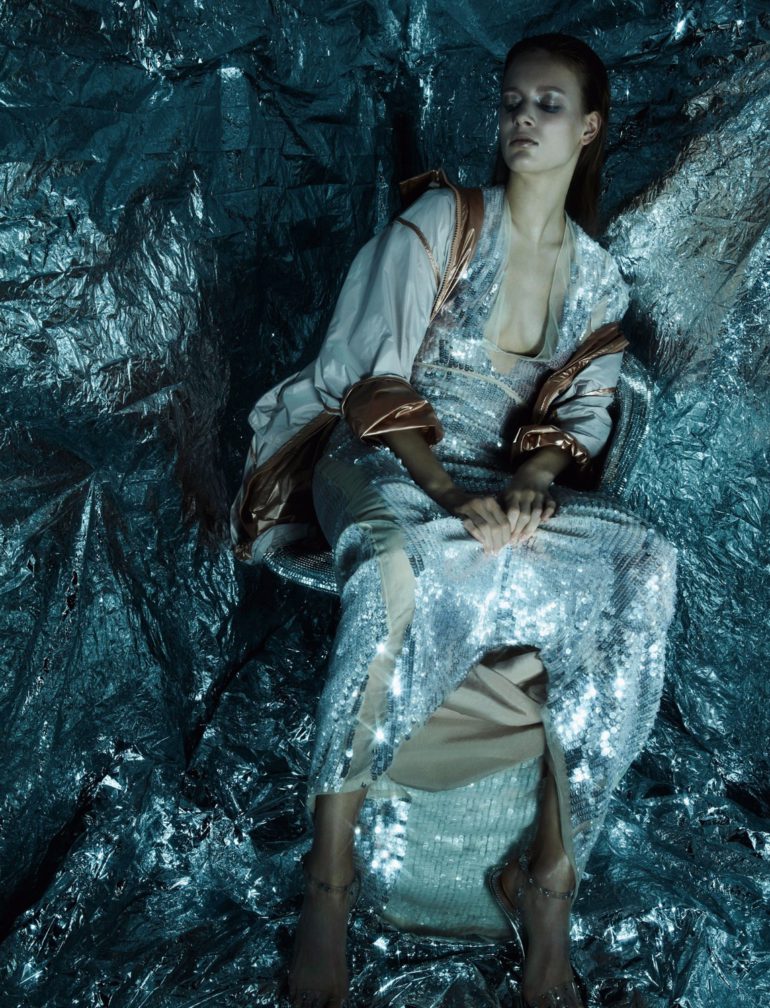 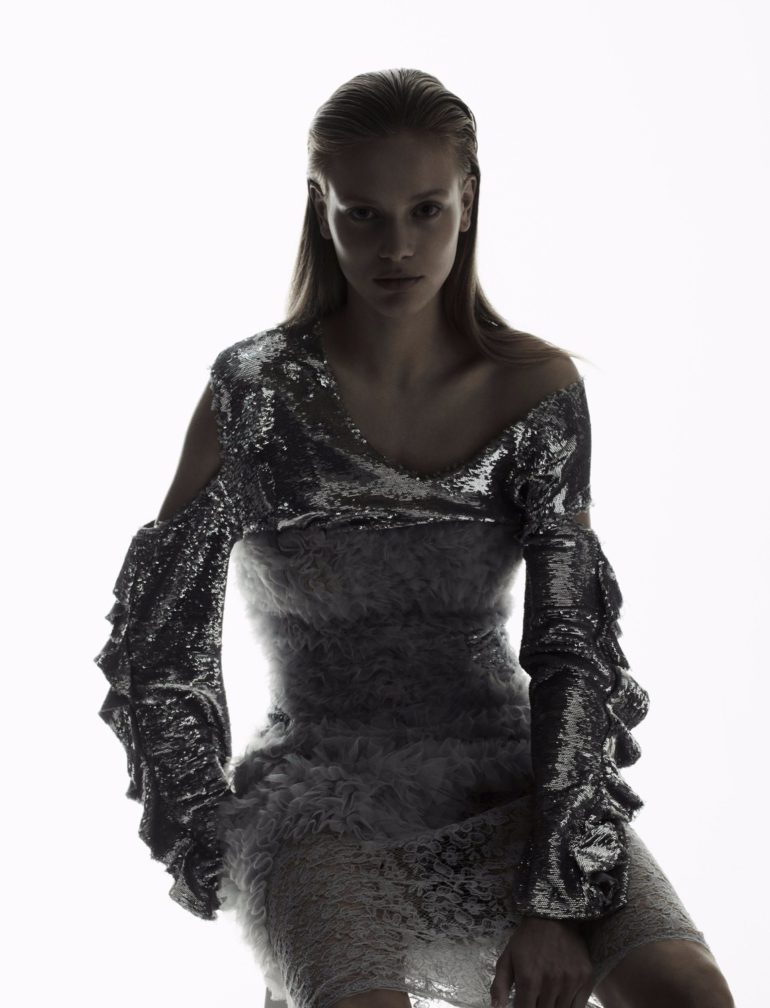 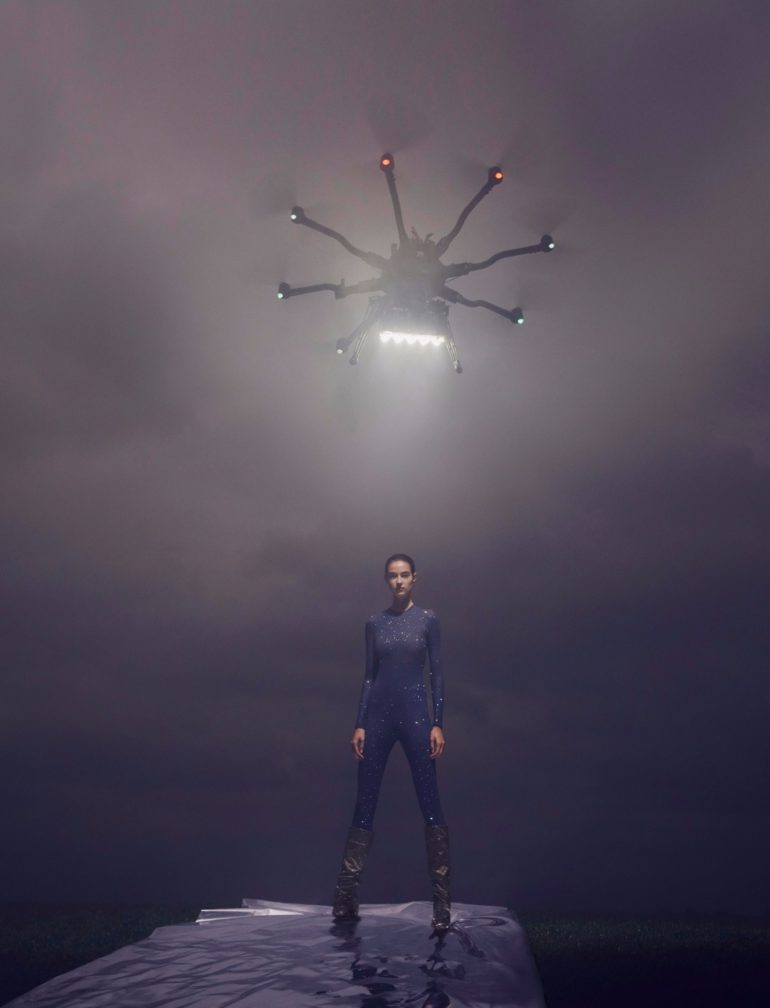 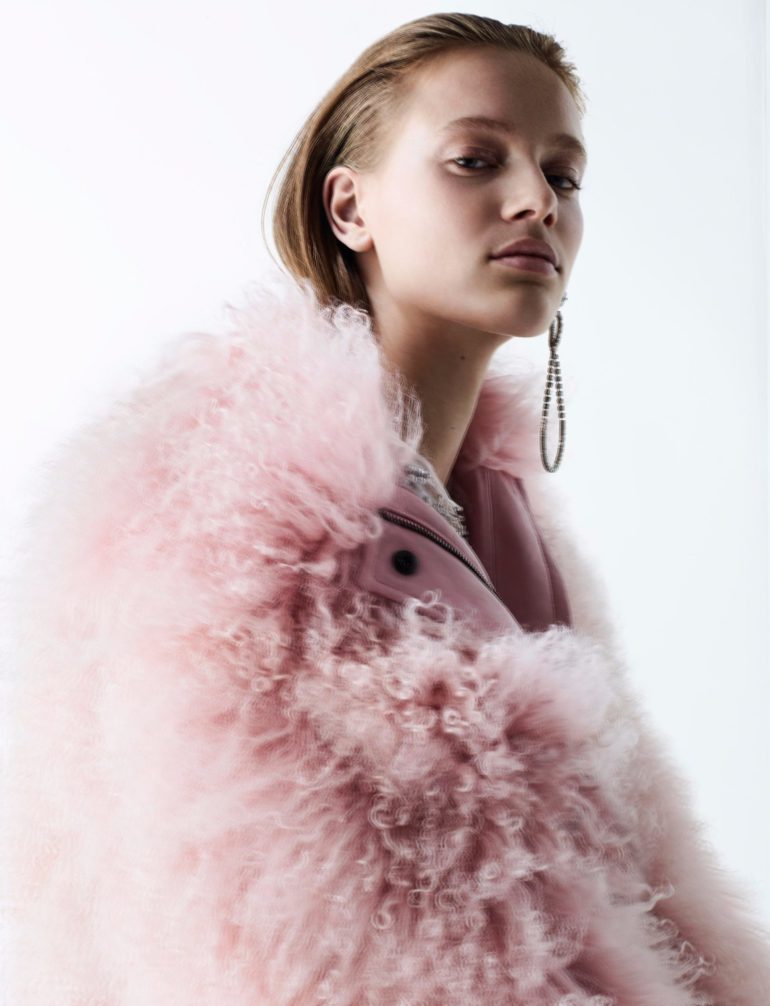 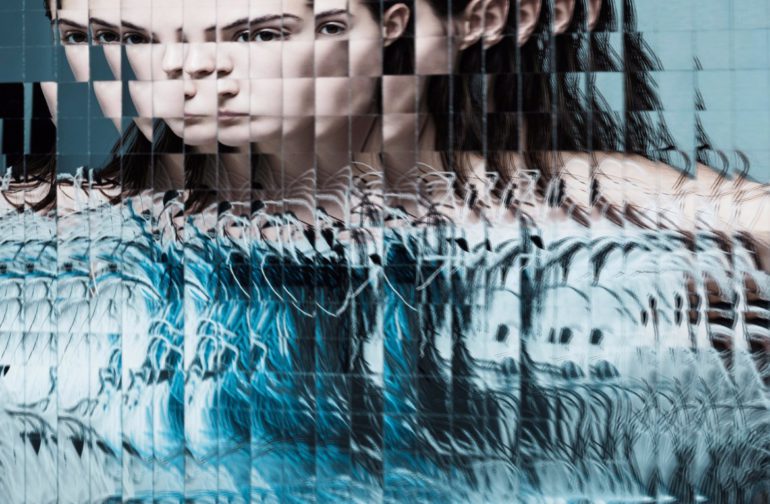 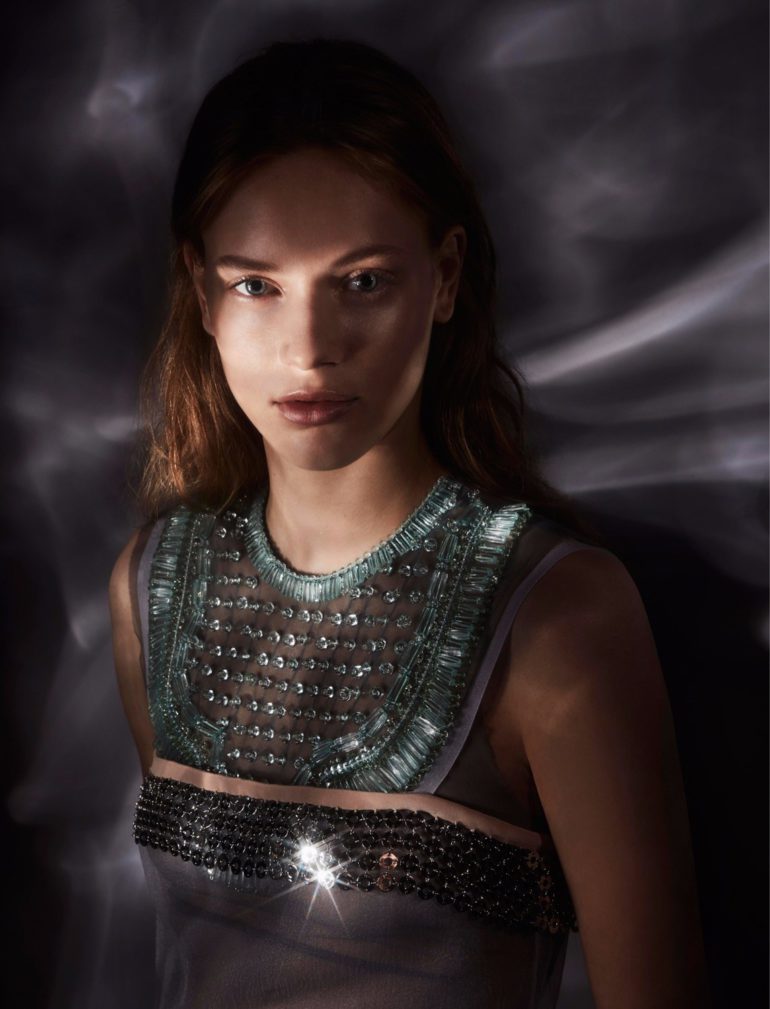 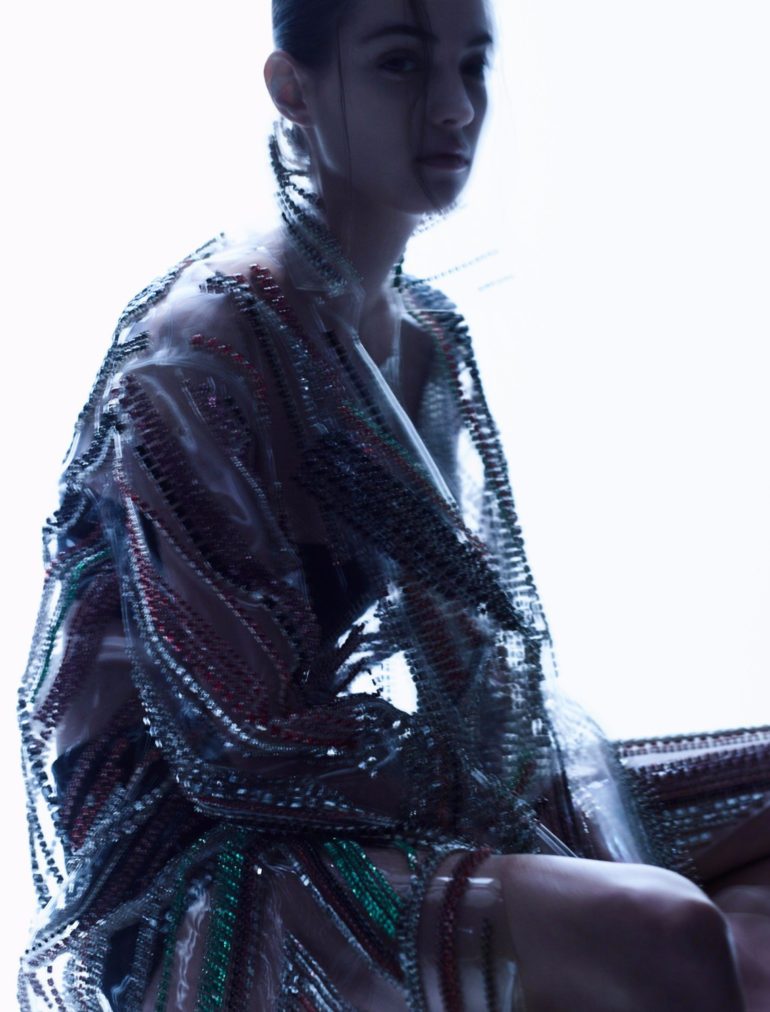 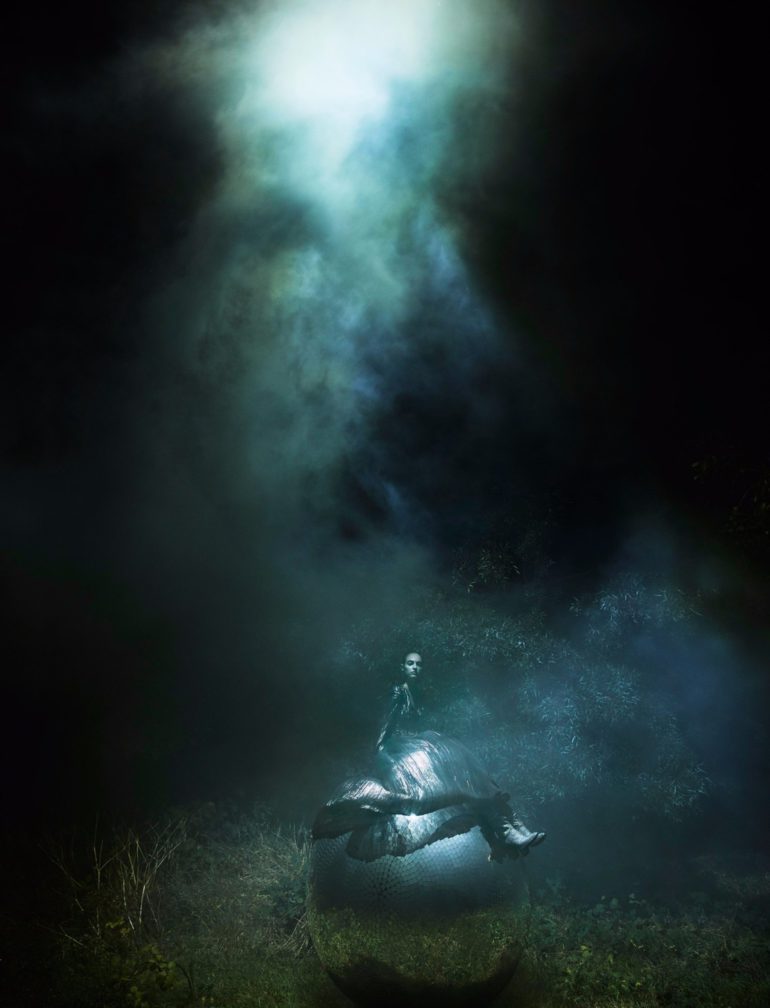 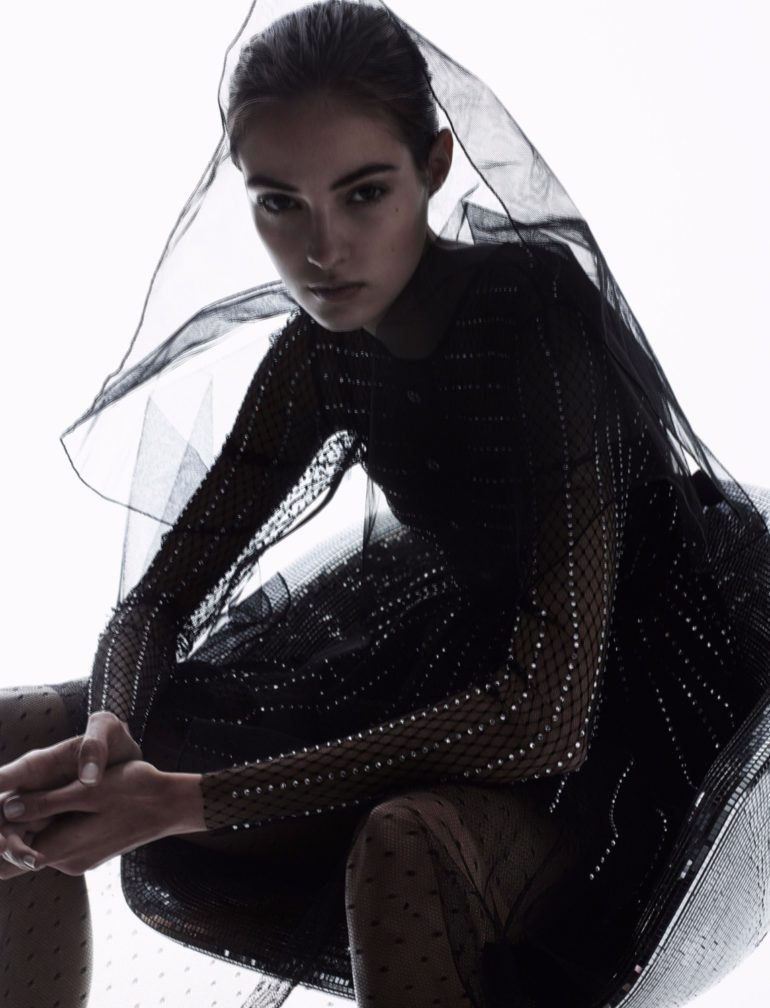 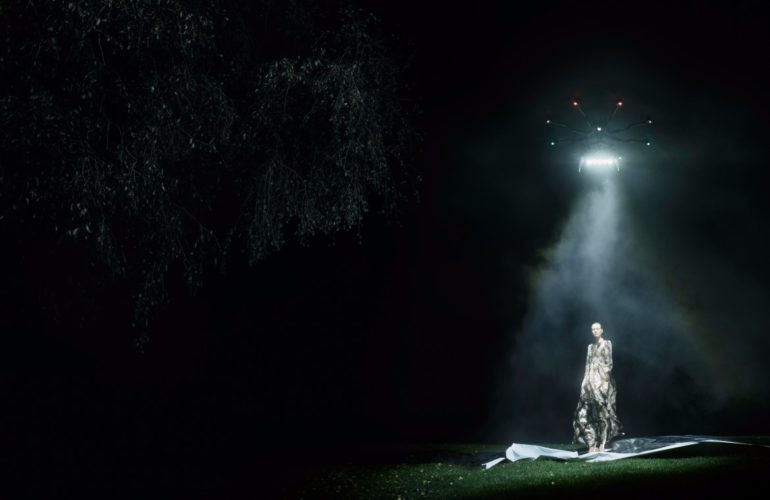 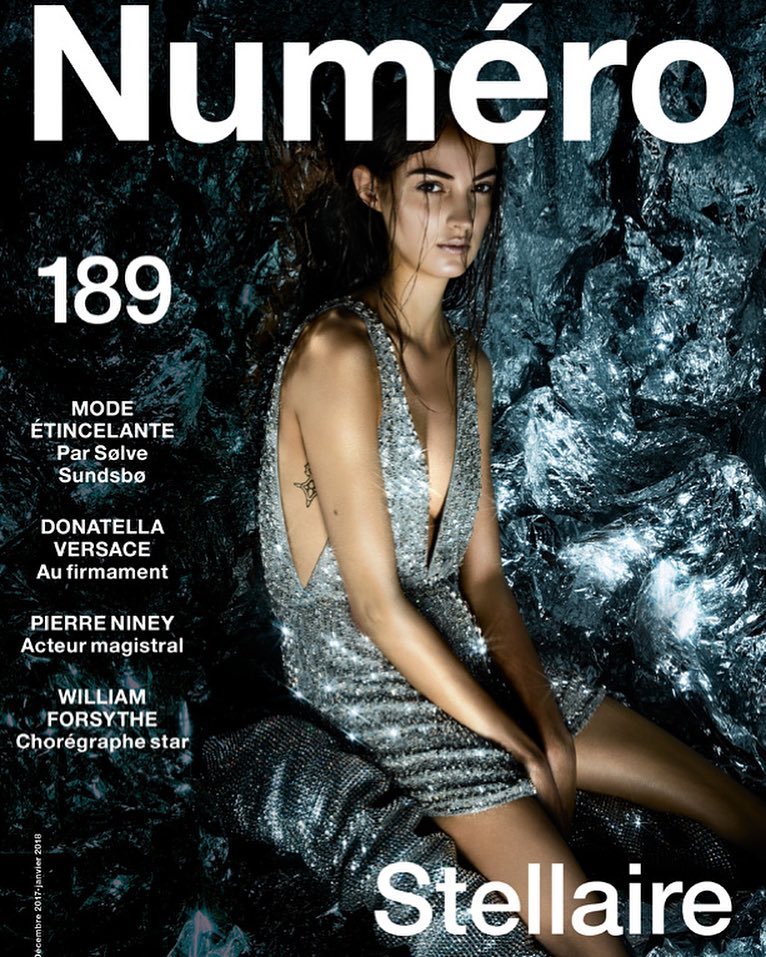 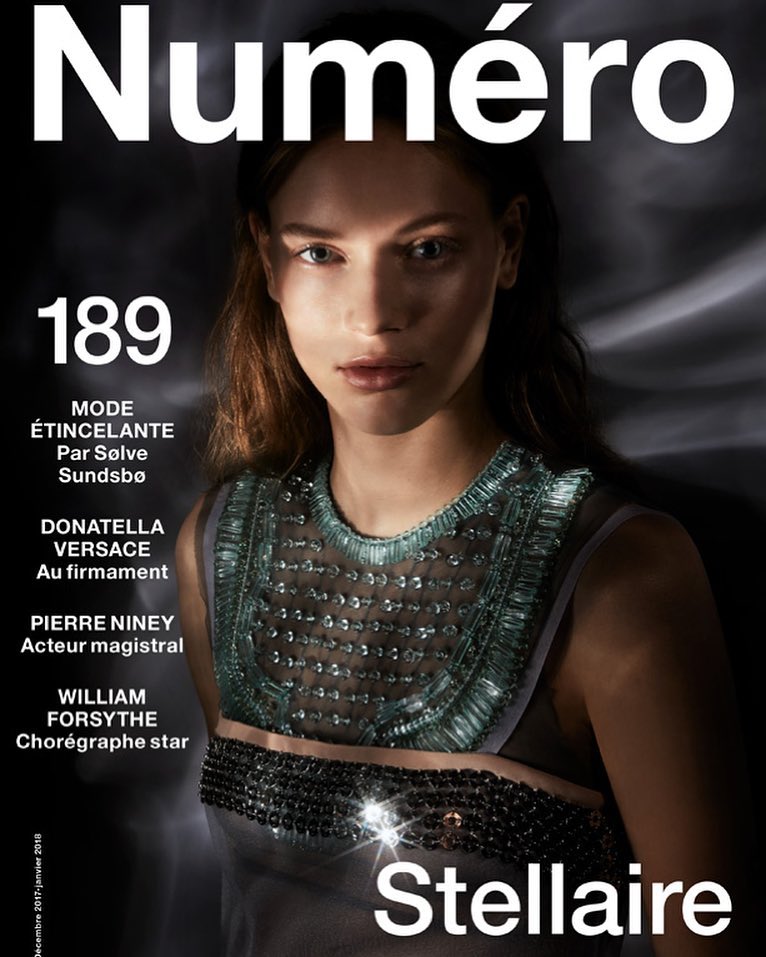