Sara Skinner bites a stick of fire as she christens the ‘Heritage’ premier issue of Numéro Netherlands shot by Elizaveta Porodina. In today’s society we are asked to endure the blasphemous overtones of the bloated masses. A dissension is required. Discord is disheartening, but sometimes it moves the needle. We are there. I won’t indulge the inanity, instead, I choose to be a non-conformists in today’s tenor of non-truth. Working from that center I see beyond the chaos. Idealistic beauty isn’t a rational reckoning of our situation, rather, it’s a hiding from our truth. This era ignites a kind of creative fire. We Don’t Need a Revision… We Need a Revolution! Humanity stands on the precise of change. This is not of our making, but we are forced to endure. In that obliged existence we need to find our footing. We won’t be bound by the rhetoric any longer. We have no room for weakness. Those begrudging efforts… begone. Standing on the precipice of change, we ask ourselves, what are we fighting for?

Erol Karadağ, Marla Belt and Lisa Jarvis form a fusion of avant-garde fighters to open the floodgates of neo-fashion. The most enticing editorial element is the fullness of each image. This takes the mind on a ride beyond the pictorial landscape. Every picture portrays symbolic reference to the topic, while reaching it’s tentacles out to explore the unknown. Here, it’s hard to absorb hair/makeup as separate entities, they seem so exquisitely entwined. Like an artist prepares to create something great, Marla uses the skin to build different dimensions. Think of the skin as a palate. Both exist within the tactile and visual realm, however, there’s a duality of distinction. Whereby, what you feel isn’t the same as what you see. This doesn’t twin your typical flat image, making it appear more multi-dimensional. Her magnificence isn’t a makeup thing. Creative cosmetics use the features as merely a building block. Sara’s eyes are surrounded with cobalt and highlighted by green. Blue isn’t a shadow statement, it’s a symbolic sentiment. Color encircles the eyes in a ways that opens her sight lines. Blue is forever hue, the water and sky goes on as far as the eye can see, so is the optical surround.

Her hair stands on end like a tall, black hat. Gravity begone as this story defies the laws of physics. Erol Karadağ makes pure magic with his hands crafting high coiffure like clay. Her black hair coils around like a branch on a tree, a twig ever turning in mystery. Reaching toward the sky three strands stand in harmony as her hair ever twists into eternity. On her head she wears not a wig or a hat, but coiffure of the creative kind. Lisa Jarvis is so in-step with the flow, her avant-garde fashions melt into the mystic backdrop. This is tale of too much never being enough. Each designs lifts the piece to place ever higher, and to that end, the entire story is a master piece of haute couture. Blue & green give the eyes an otherworldly element, while white powder & red lips finish the forward face. Black smears like oil over the eyes, with charcoal steaks reaching over her cheeks. Between her teeth she bites down on a Match. Like a moth to the Flame we’re intoxicated by this fiery game. Danger defines her yet darkness doesn’t overtake her. This is the distinction. Here, she literally breaths fire as she stands in front of a baby-blue background. The lights are out, except for the match that sits, daringly stricken, between her teeth. Her plump lips act as a precarious barrier while Belt’s beauty is a living, breathing thing. She aches to be seen while she deigns to be devoured.

Makeup is defined not by the “pretty” it can portray, but the unique beauty it can bring. Here we’re witness to one of the most exquisite cosmetic captures of this season. This is All Consuming Beauty. By that I mean that every image is fully realized. Complete in it’s creative intent. This invites a critical eye to see the heights to which they’ve climbed. To me I see this as a comment on how we are living too close to the fire. It’s not a tale of too much. It’s a commentary on (dare I steal the term) the state of our union. Many times application practices, like these, are done in playful retreat. But, as we stand on the precipice of a systematic overhaul of humanity, I see this as a Beauty Backlash. Society’s attempt to veer on-course. This is not a backlash this is a bring-back. To get to the creative landscape of which we adore. The Artful Aesthetic of Skin Graffiti erupts down the body like street paint finding cement. In a Final Force of Fire/Fury, Six Lit Candles Rise Out of a Red Cap that Appears like Melted Wax. Not willing to end there, the entire canvas of her face is covered in the same crimson color. Sara Skinner is literally on fire as… BEAUTY BURNS!!! 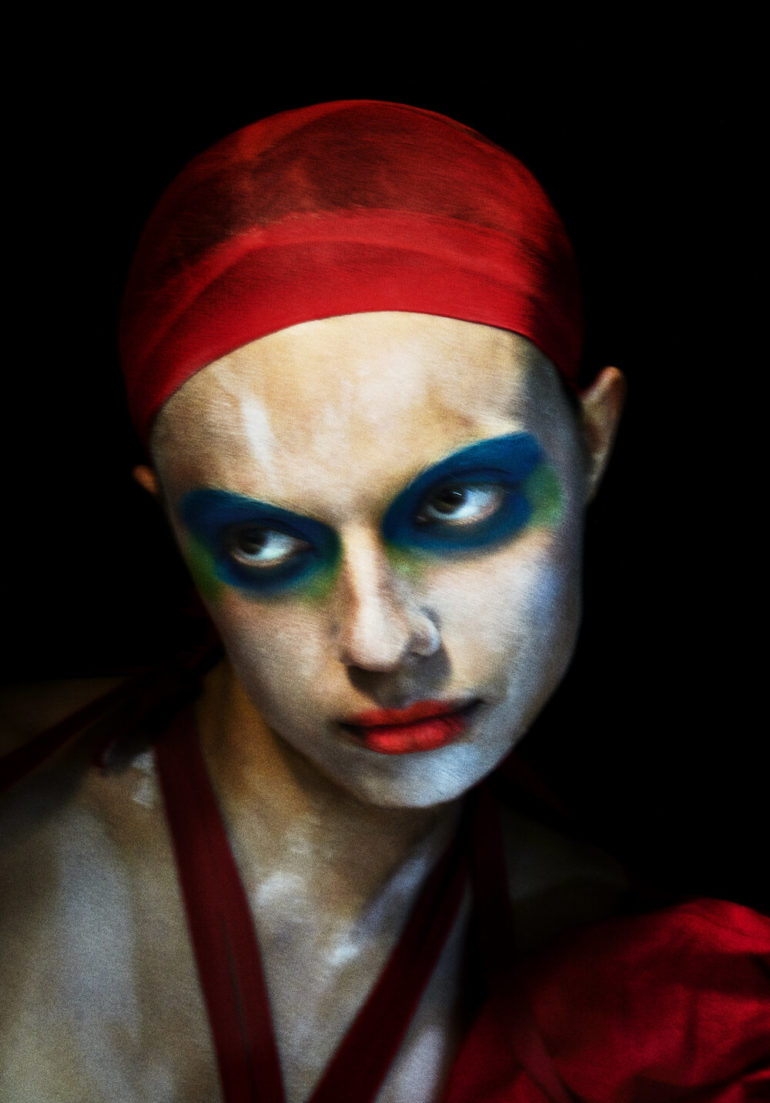 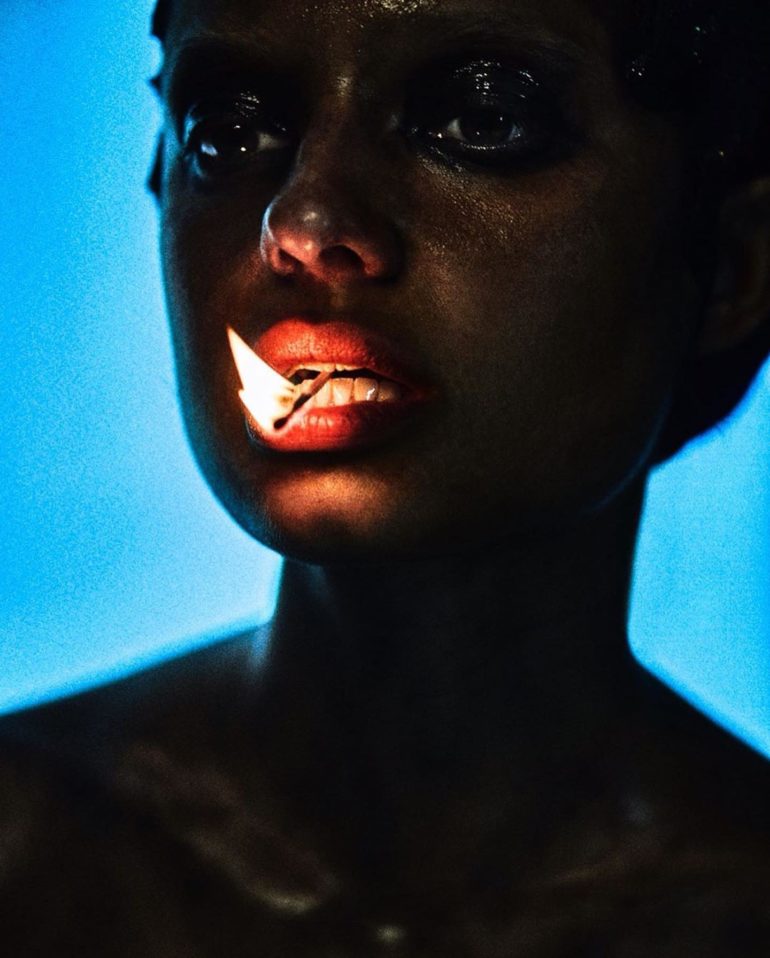 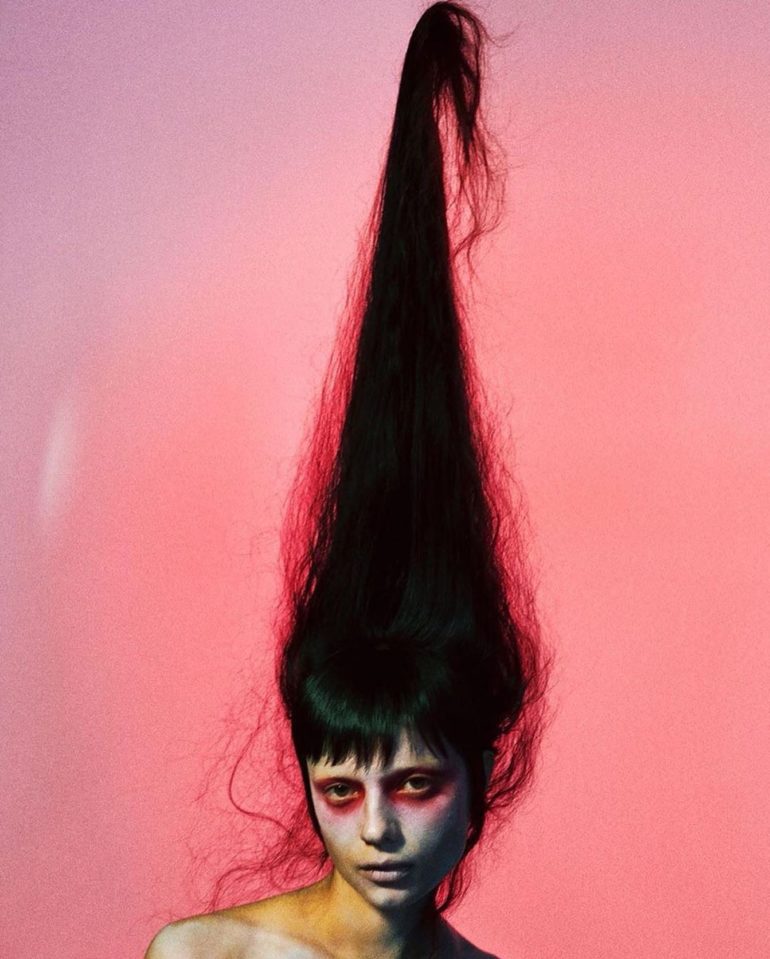 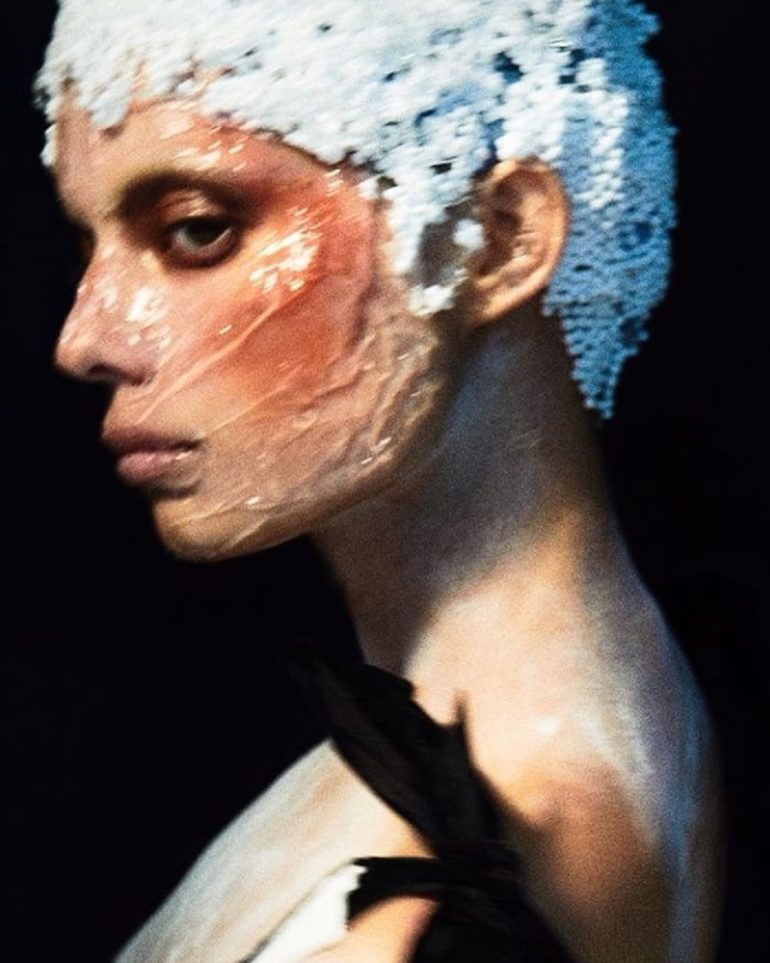 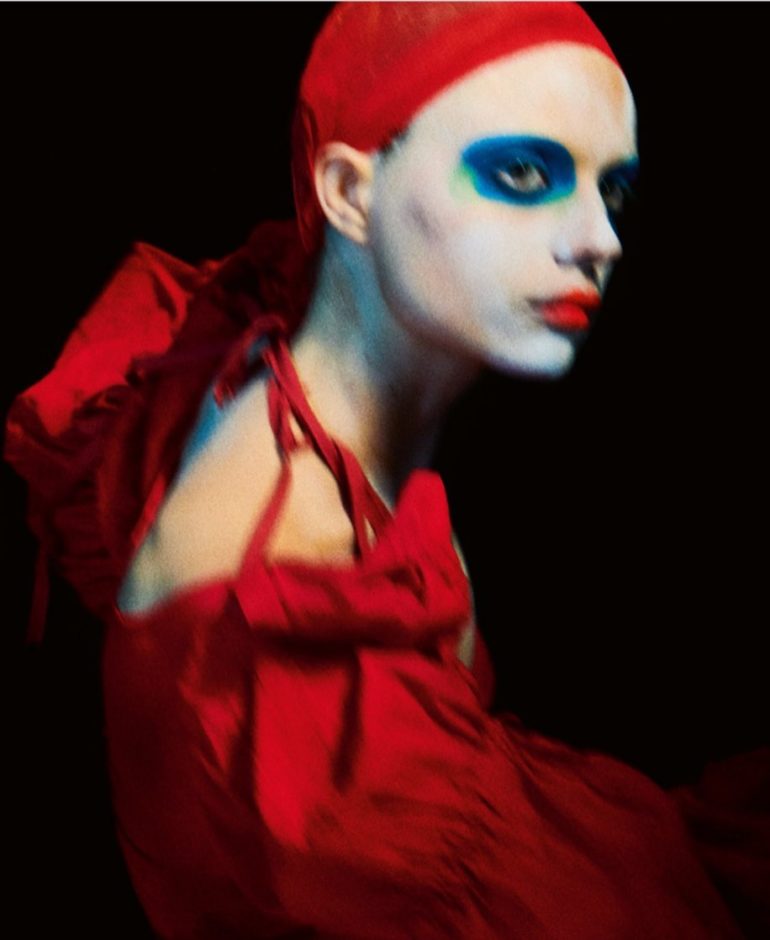 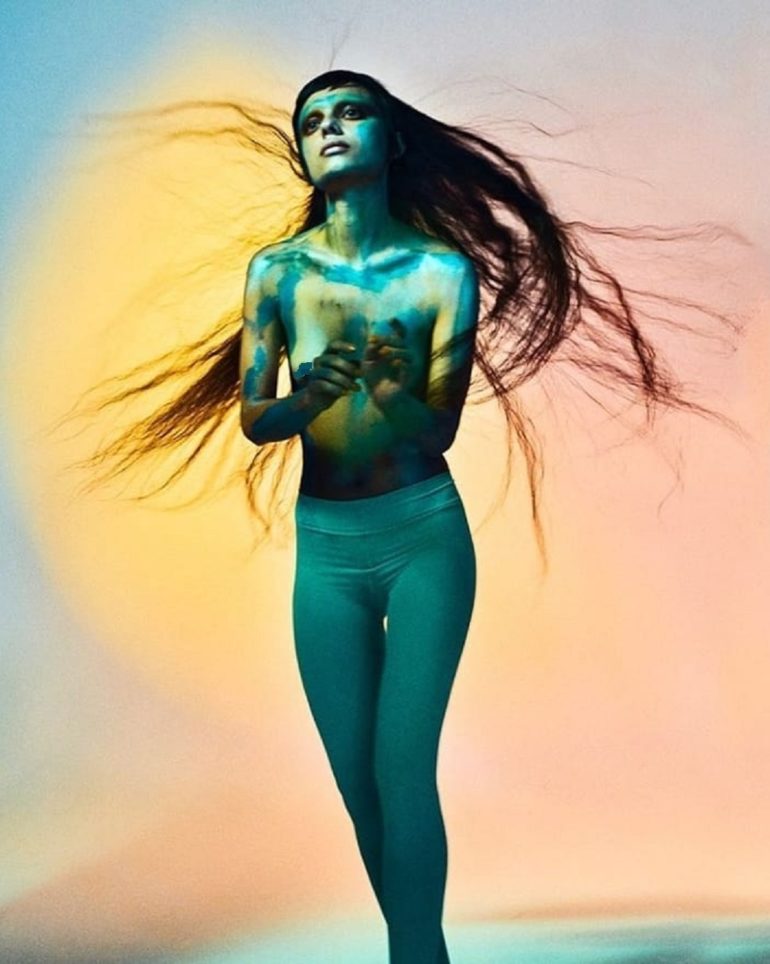 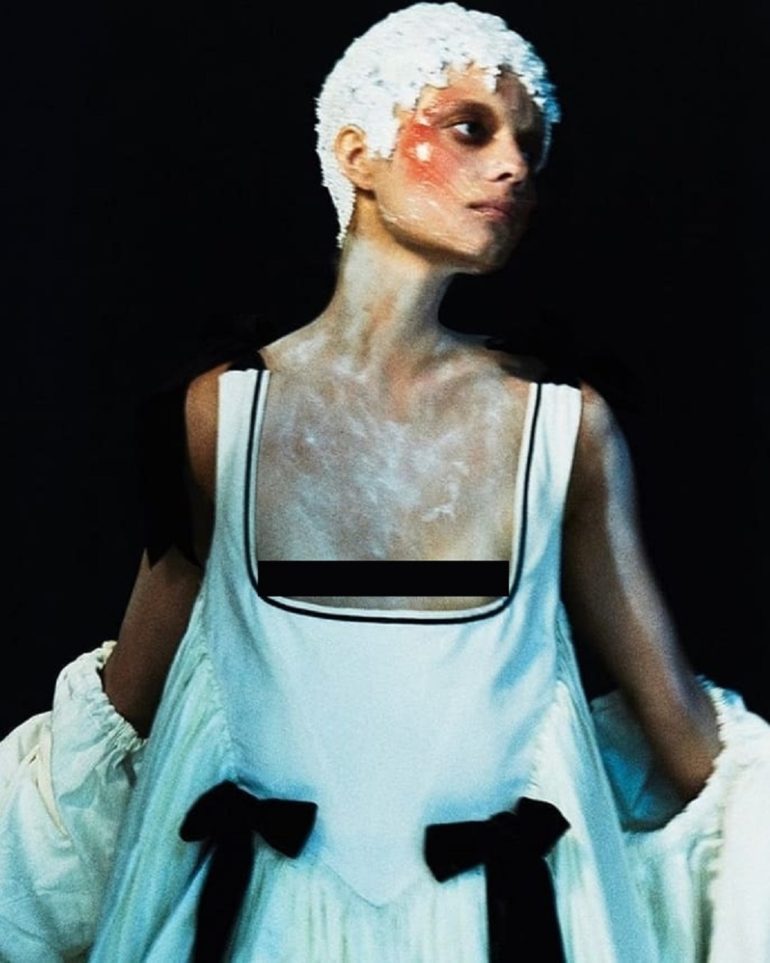 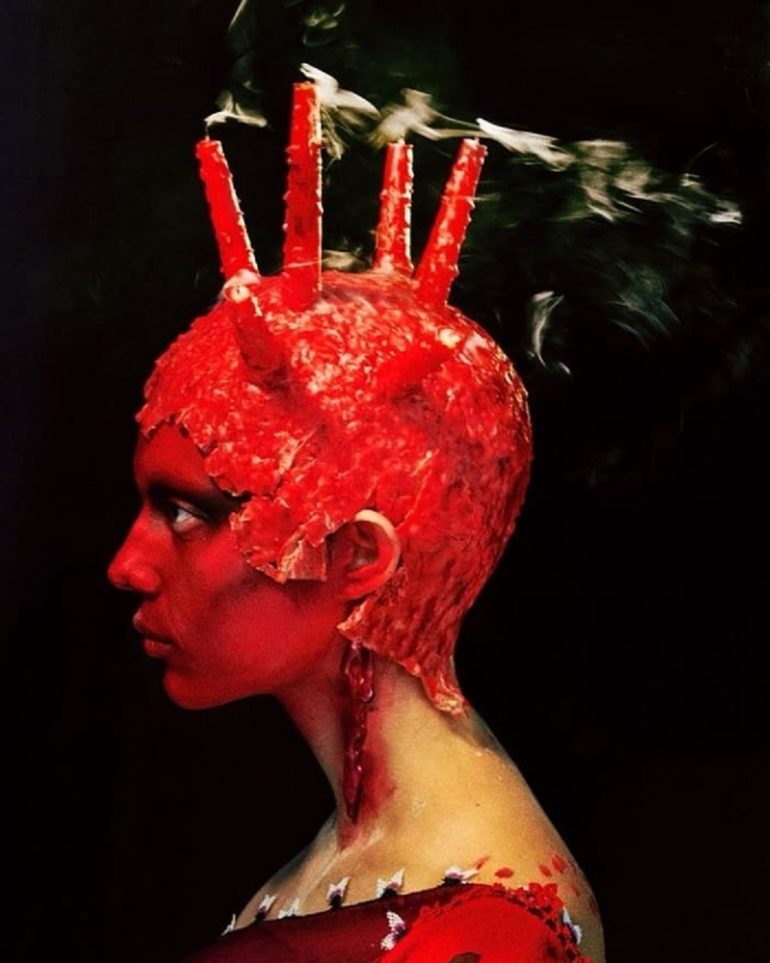 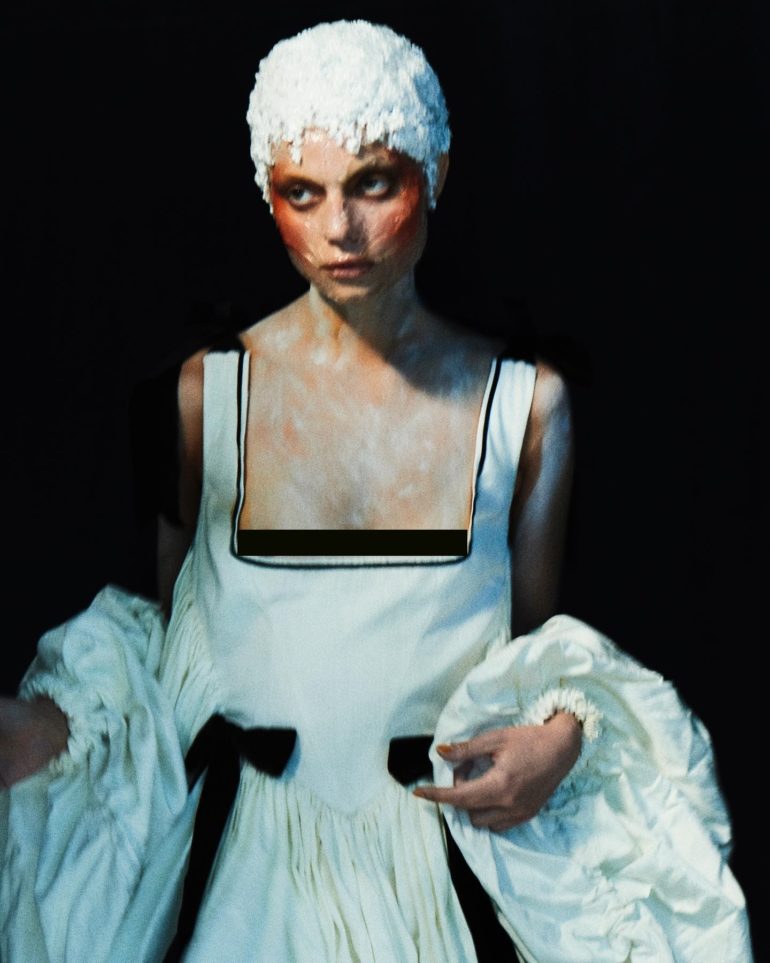