Posts in the CELEB LIFE Category 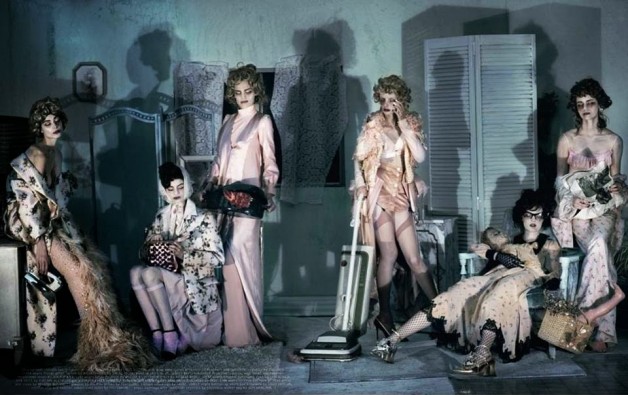 Leave it to the King of dark arts to deliver the definitive high fashion horror story this season in ‘Disturbia’ by Jeff Bark for Dazed & Confused November 2013. Wearing the finest in high end attire a family of gorgeous ghouls roam the country side seeking to satisfy their hunger for Haute Couture. Dropping a series of zombie sisters into the center of suburbia could be a recipe for disaster, but leave it to Bark to find the balance, giving us another in a long line of bewitching editorials.

Arizona Muse is Divine in 25 Magazine by Katja Rahlwes

Slip into the avant-garde reverie of 25 Magazine’s (bi-annual) Summer 2012 issue, with Arizona Muse in, “Wet Apocalypse.”  Turning the mundane into magic, Katja Rahlwes transforms everyday activies into edgy fashion-fodder for the seminal publication.  Watching the neon glow of shaving gel, as it slowly makes its way toward the Louboutin (spike-toe) Pthyon-Stiletto, is pure style-stimulation.

I must confess, I’m a hard core Aldridge-Addict always longing for another fix. Known for his special brand of vigorous-vibrancy, he has taken his place as fashion’s reigning, “King of Pop.”  In this brilliant depiction of life inside the fishbowl, Miles Aldridge captures the manic tension of rising celebrity, with British actress, Jessica Brown Findlay.  Someone who is clearly the product of his uniquely-eclectic background, every image seems to pay homage to his artistic genealogy.

Cameron Diaz sizzles on the June cover of Harper’s Bazaar Uk.  The phenomenal Tom Munro brings out the sexy side of this self-proclaimed tomboy, with images that play off the dueling sides of masculine & feminine.  And with a body that seems to defy the aging process, she continues to get sexier with each passing year.  Images via visual optimism. 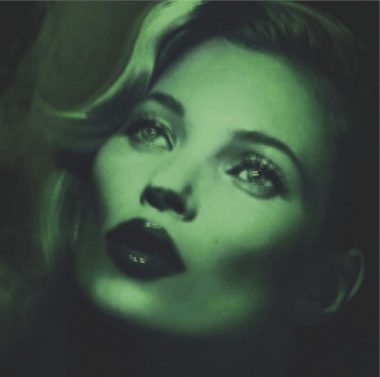 Tom Cruise Rocks out on the Cover of W Magazine

In a layout that has art imitating art, Tom Cruise is draped in “Groupie Love” with the likes of Abbey Lee Kershaw & Edita Vilkeviciute, for the June cover/editorial of W Magazine.  Promoting his upcoming Summer release, “Rock of Ages,” he is tatted-up and ready to go.  Every bit the larger-than-life rock star, his look is complete with skin-tight black-leather & smudged-out black liner.

Noomi Rapace graces the super-charged cover/editorial of the June 2012 – Intergalactic – issue of Dazed & Confused, by master illusionist, Sølve Sundsbø.  Capturing the star of the upcoming film ‘Promethius’ in all her stoic glory, we get a taste of what this other-worldly beauty will be bringing to the futuristic table.  Known for her role in ‘The Girl with the Dragon Tattoo,’ the swedish actress is clearly at home in roles that require a serious transformation. 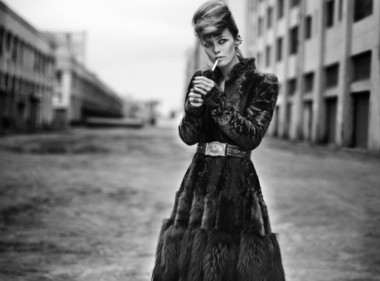 Hitting the fashion “sweet-spot,” Vanessa Paradis delivers pure-edge, as Boo George captures the elusive “other-half” of Hollywood’s brilliant bad-boy, for the May issue of Interview Russia.  This French actress/musician and Johnny Depp’s long-time mate, has always felt like a bit of a mystery to us in the U.S., which has only worked to heighten their “cult-status.”  She & Depp have chosen, the admirable route, of raising their family away from the prying eyes of paparazzi, but that has left Vanessa out of the proverbial “spot-light,” and, largely, relegated to living in his shadow.

Ever-evolving, this gorgeous oscar-winning actress proves that some really do get better with age.  Channeling Grace Kelly, Patrick Demarchelier captures the indescribable essence that is Charlize Theron, for the May Cover/Editorial of Vogue UK.  In a land of a million pretty women, this statuesque, blonde stands out, and has been re-defining the limits of Beauty in Hollywood, throughout her entire career.

In the May issue of Marie Claire US, British actress Felicity Jones is the perfect “Lady” in looks from Dolce & Gabbana.  In a variety of white outfits, with lace & embroiderer trim, these retro-inspired fashions make for a refreshing statement this Spring.  There is nothing sweeter that a delicate little dress for a Summer’s day, and nothing that makes your makeup Pop, like and all-white ensemble.

If this is wrong, I don’t want to be right.  With the combined “indie-spirit” of fashion & rock, mixed with the raw-edge of insanely powerful DNA, Georgia May Jagger proves that “this sh&% just can’t be taught.” Inheriting a kind of genetic “super-power,” this sublime creature popped-out with traits so innately cool, all we are left to do is sit back in awe.